You may not guess it since we haven’t been doing it as regularly as we’d like to in a long time, but there isn’t much the girls, David, and I like more than getting outside. Hiking and camping refreshes us in a way nothing else can. Now that the girls are 5 and 2, we hope to do it more often, especially because we live in North Carolina and have incredible destinations within a two hour car ride (like Stone Mountain State Park, which we hiked when Kaitlyn was only 9 months old!). 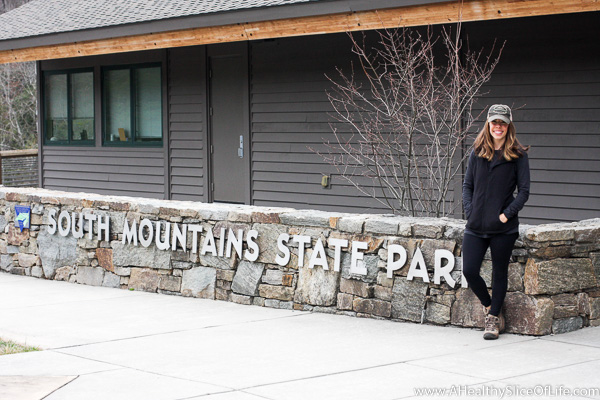 This past Saturday we made the easy 1.5 hour scenic drive to South Mountains State Park in Connelly Springs. This rugged park features elevations to 3,000 feet, an 80-foot waterfall, mountain streams, and more than 40 miles of trails for hikers, equestrians, and mountain bikers. 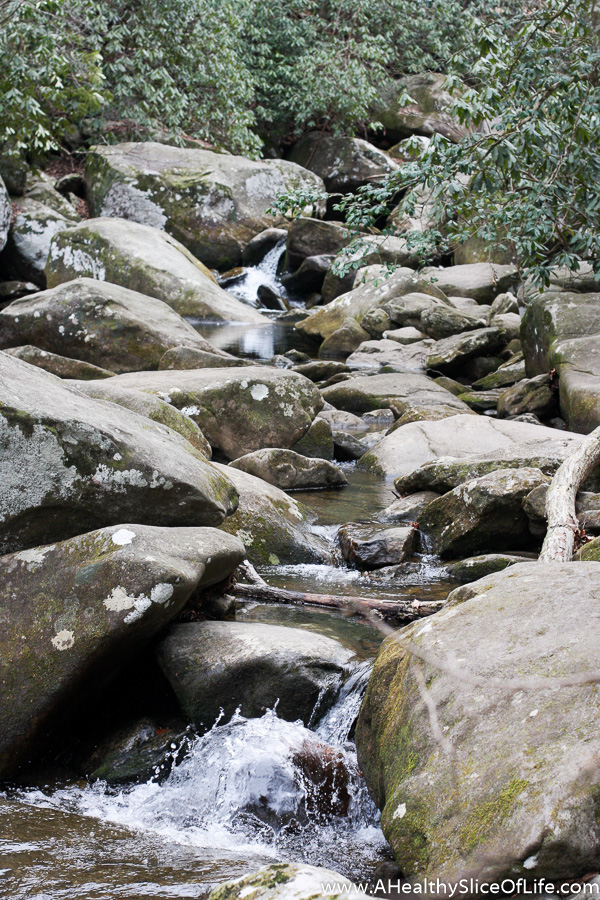 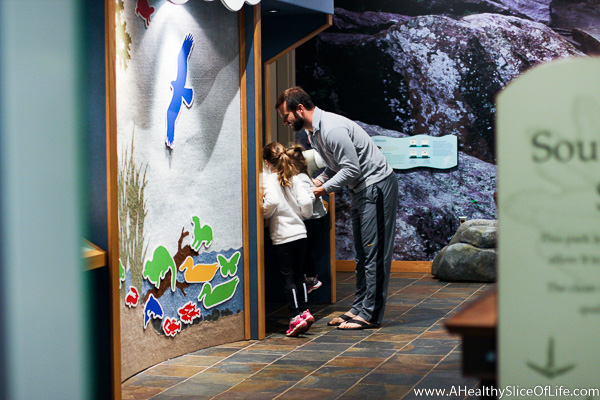 It’s an educational playground with microscopes set up to look at river residents, buttons to push to hear noises from the animals around the room, a water feature, and so much more. 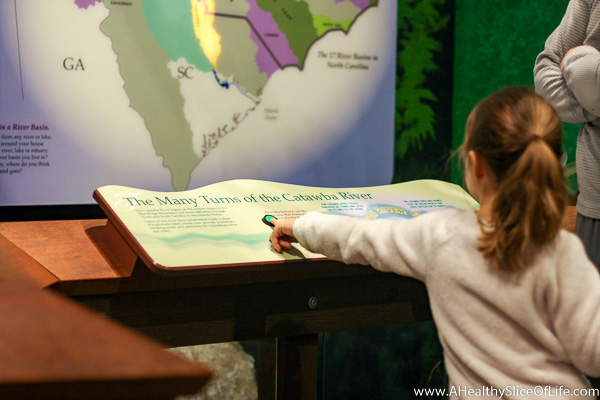 Hailey begged to return after our hike, and we did.

Though there are 20 marked trails to choose from, as a young family we were interested in seeing the 80 ft waterfall and finding a trail right around 3-4 miles long. 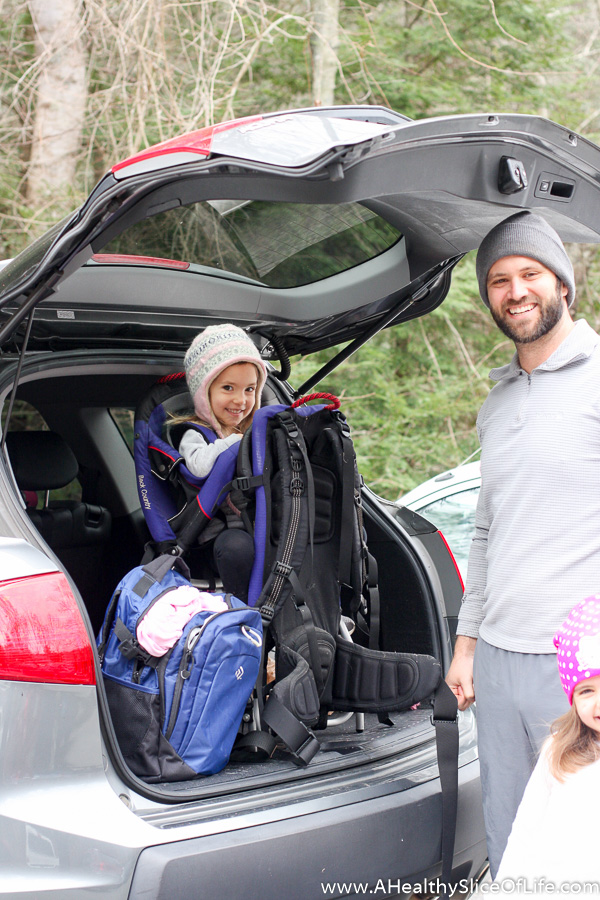 The High Shoals Falls Loop Trail, the most popular trail in the park, was exactly what we were after. 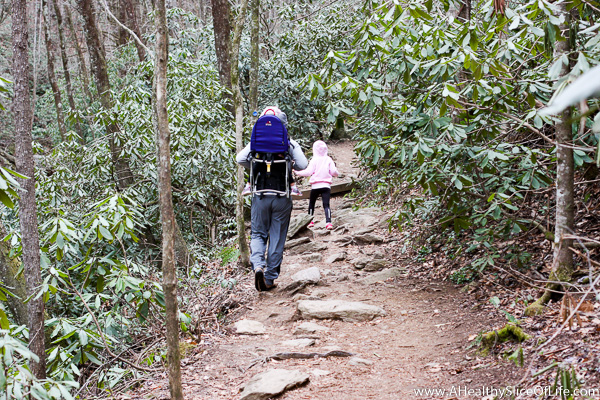 The 2.7 mile long trail is marked strenuous. There are short portions of steep inclines and several areas of climbing over large rocks 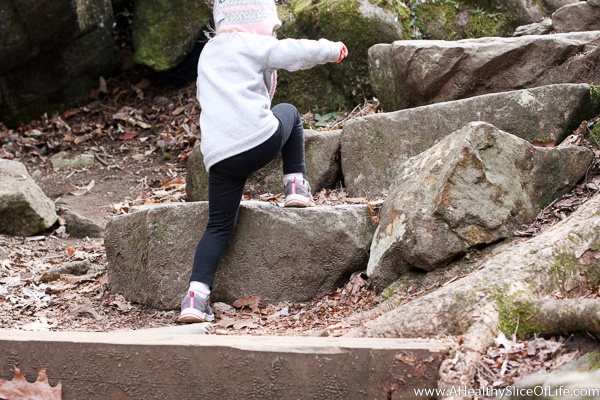 The river and the rocks surrounding it were huge hits with the girls. 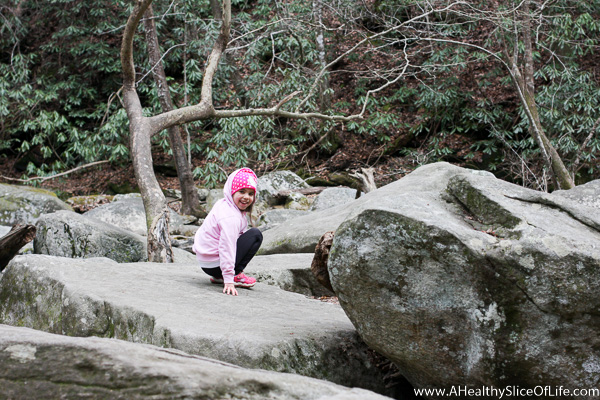 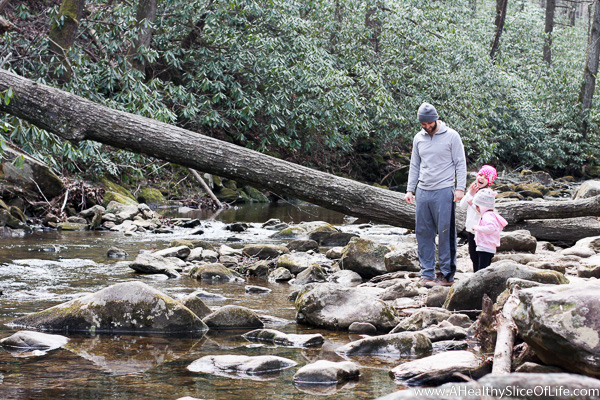 As were the multiple bridges over the Jacob Fork River that we got to cross. 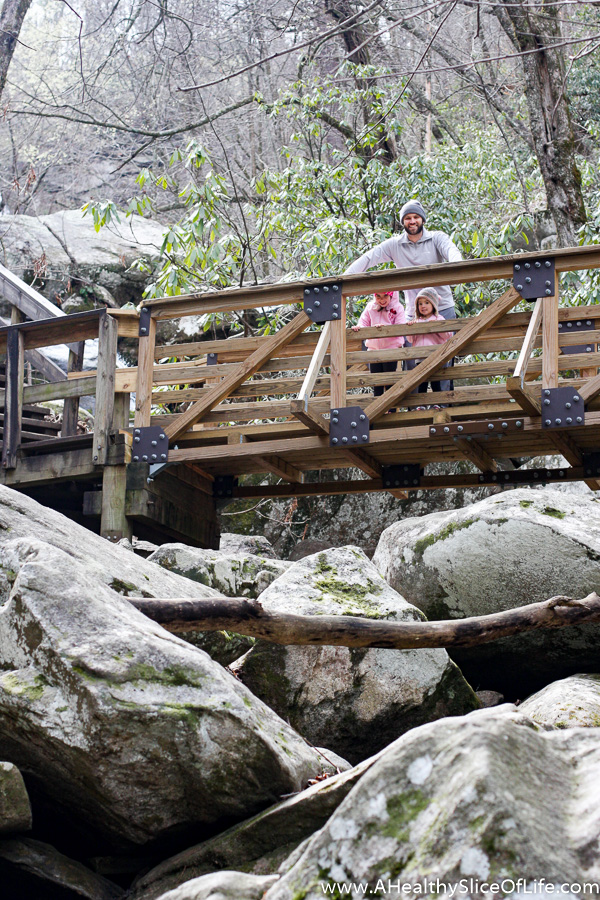 Hailey was in giggles the whole way, minus the one time I asked everyone to be still so we could savor the silence and she thought I had seen a bear and almost broke into tears. Oops. But other than that, she was a ball of energy and loved pointing out every waterfall we encountered, no matter how small (and calling it a water fountain). 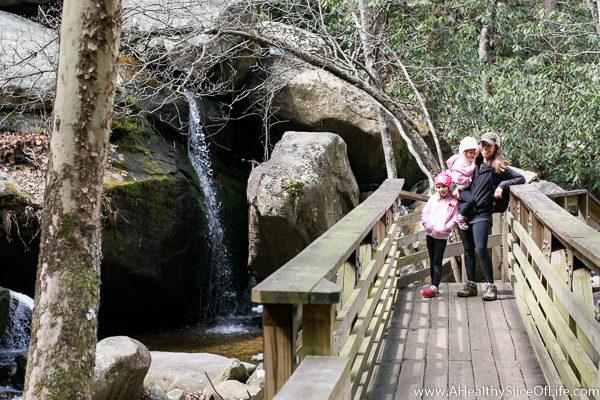 Kaitlyn hiked probably about a mile total, which I thought was pretty good for a two year old. She was really into touching every single blaze we encountered, which was adorable… at first.

The other time she swapped between riding with David or me in the Kelty. 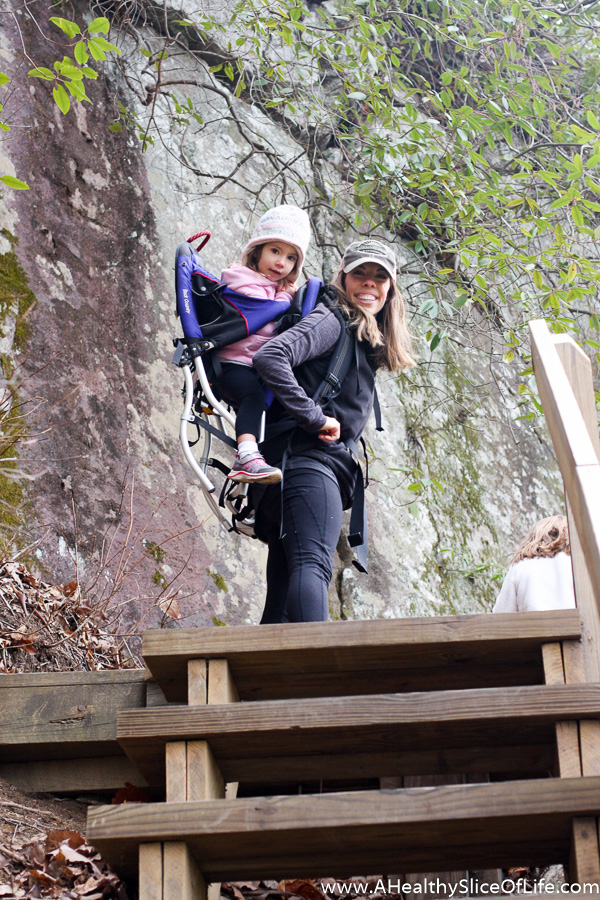 We love our Kelty (we found it used years ago on Craigslist).

Hailey rocked the entire trail on foot and could have kept going. She didn’t mention tired feet once and I’ll be honest, I was impressed and excited at what this means for future family adventures. 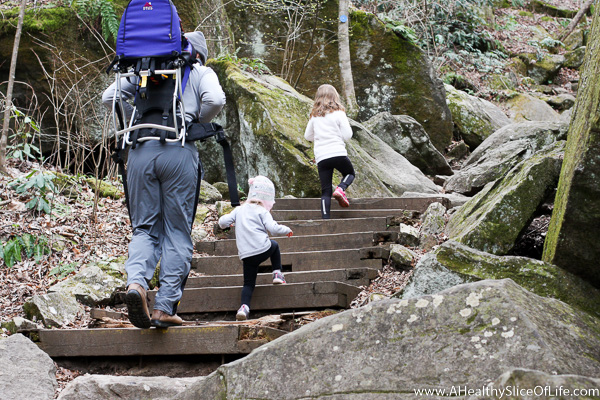 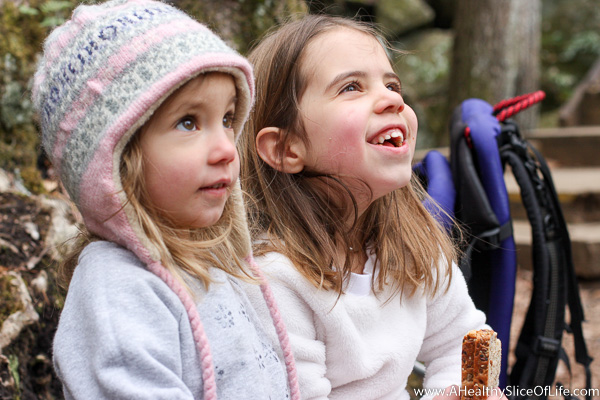 and Publix subs (the adults). 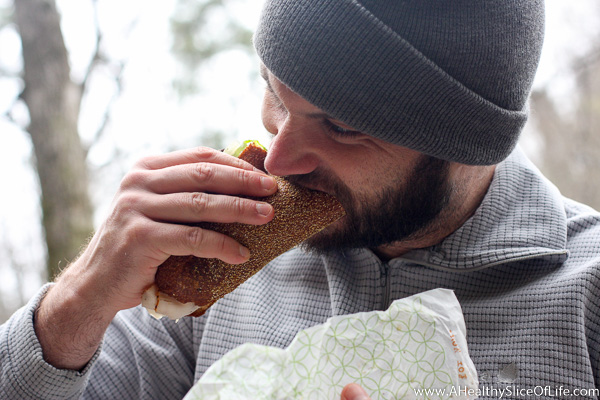 It was colder than we anticipated (probably around 40 degrees), but if we kept moving, we were fine. Luckily there was plenty to play on in nature’s playground. Since this trail was one of the park’s most popular, there were little overlooks and educational boards set up throughout it. I admit, I often walk right past those things, but at the age of 5, Hailey is a barrel of curiosity and wanted to read every sign (I think part of her was looking for reassurance we weren’t going to run into a bear). 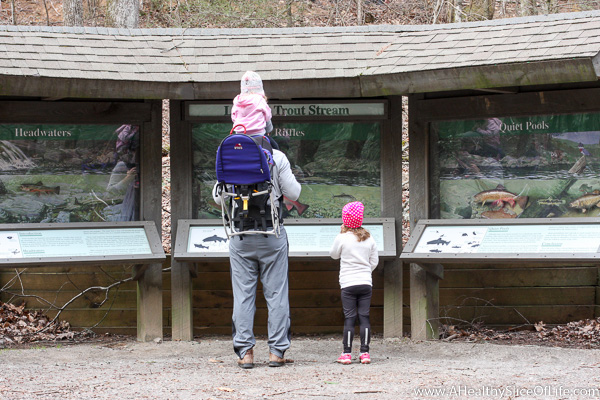 The hike took us about 3 hours, so at a pace of about 1 mile per hour we weren’t exactly flying through it, but that’s not what we were after anyway. 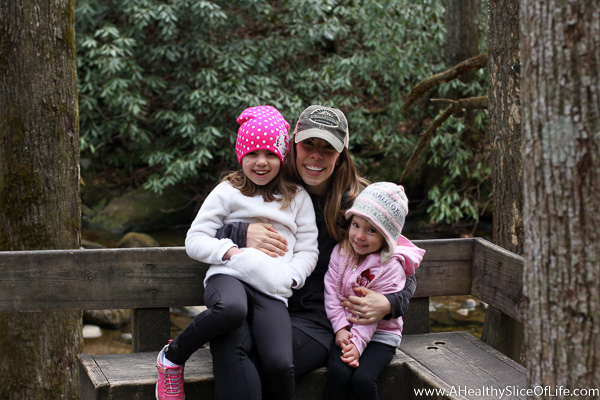 By the time we all piled back in the car, we had that beautiful feeling of being tired yet completely wrung out and satisfied. We had such a fun time and it’s high on our list to return to for camping sooner than later!

I have to brag on David for a minute who threw together a short video of our family hiking experience.

The hike did pull at our heart strings a little, as Koda loved hikes more than any of us. We still miss her and talk about her often, and though no pup will ever replace her, we smile about the day we’ll have another four legged friend to take on these adventures with us. PS- if you’re into outdoors and dogs, you must check out this instagram account.

Are you into outdoor adventures?

Where is your favorite place to hike or camp, or a place you’d love to visit one day?

I could go back to Telluride again and again, but would also love to explore the Pacific Northwest!