A detailed look into our delicious evening at CocoMaya, a “beach chic” restaurant on Virgin Gorda, on the last evening of our BVI family sailing trip.

For the most part, our meals during our week-long sailing trip were casual. I cooked some meals and we enjoyed dinners at beach-side spots like Foxy’s, The Lobster Trap on Anegada, and Cooper Island Beach Club. On our last day, after spending a full morning and afternoon at The Baths, I proposed the idea to David of getting dinner at a picturesque restaurant I had heard several people mention- CocoMaya.

CocoMaya Restaurant is just around the corner from The Baths, located at Fort Point in Spanish Town and has a “Beach-Chic” vibe. After a quick google search I saw it had rave reviews on Trip Advisor and is consistently rates as one of the best restaurants in The British Virgin Islands as a whole. David often lets me pick the restaurants because he knows how much joy good food brings me, so we decided to take a closer look and see if it seemed like a good spot for our crew, being that we had a 7 and 5 year old in tow. 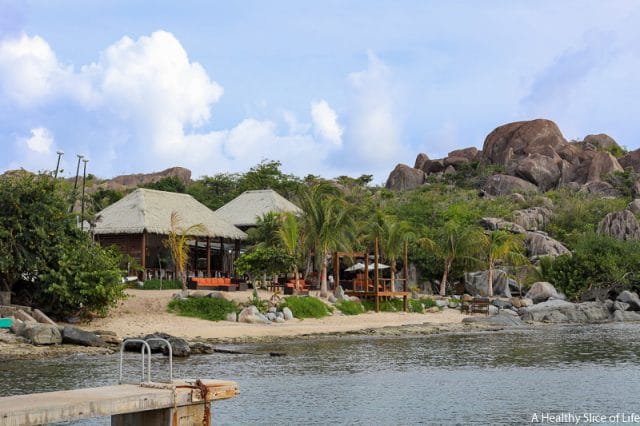 We anchored in the harbor where there was little else, other than some ongoing post-hurricane repair on a couple other buildings. David dropped me off at the large dock in the dinghy and I wondered in around 2:30 to see if we needed reservations. The hosted was so kind and suggested a 7:30 reservation so we’d be sure to experience the sunset.

Since we learned our lesson the hard way after taking an 8:00 PM reservation the night before and having Kaitlyn basically face-plant into her supper, I asked if a 5:30 would be available instead. I saw her scribble us in at 5:30, though not a single other reservation was made for that time, so I’m certain we would have been fine without out.

We moved our boat over to a neighboring mooring ball for the night and all showered up to go into shore. Around 4:30 we decided to head that way to grab a drink beforehand and enjoy the vibe. 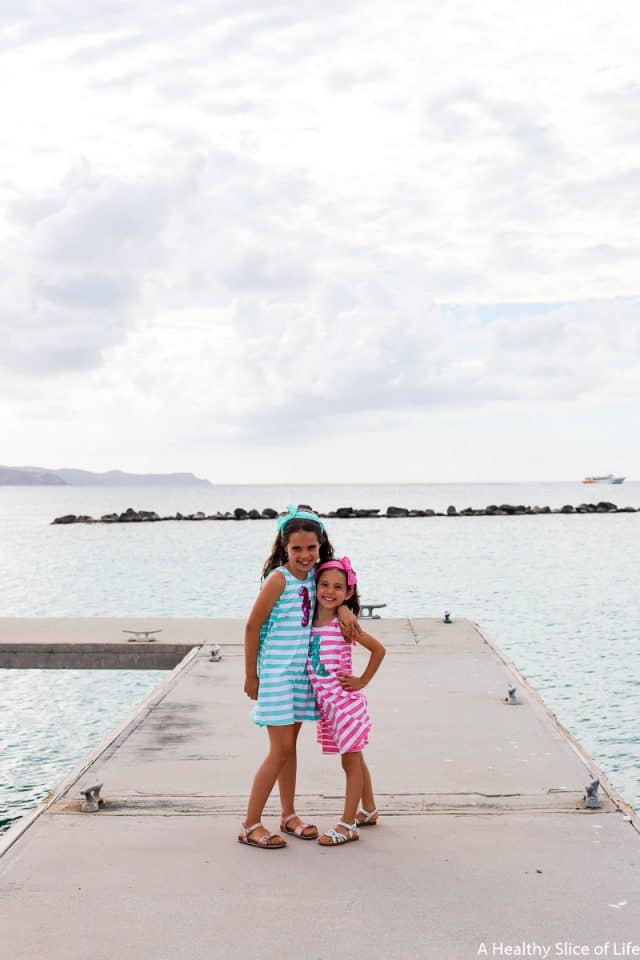 We walked in the open-air restaurant to the sound of 50 Cent’s “In Da Club” (not the radio edit) being spun by a DJ set up on the sand by the bar. I giggled when I saw David turn around and raise an eyebrow at me. It had a very Miami vibe, which is not typically our kind of scene, but it was a beautiful set up, they had SWINGS at the bar, and I was ready for one of their happy hour specials- a mango champagne cocktail. So we ventured onward.

On the waterfront side of CocoMaya they had beach games set up, from wooden block Jenga, to cornhole, and more. The girls quickly busied themselves while David posted up at the deep-set outdoor couches. I headed to the bar to grab us some drinks while the club music continued to bump loud and proud. 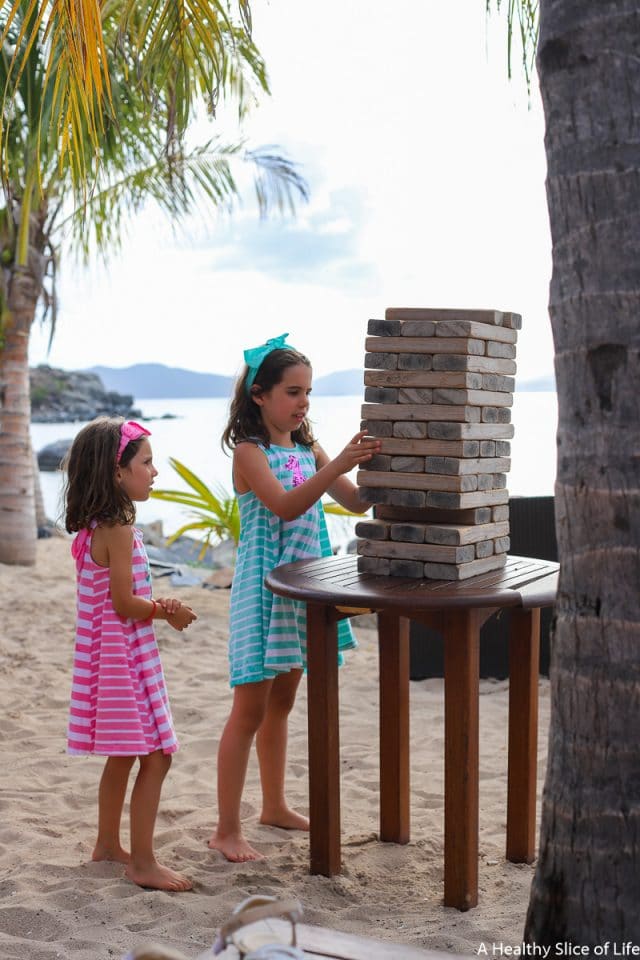 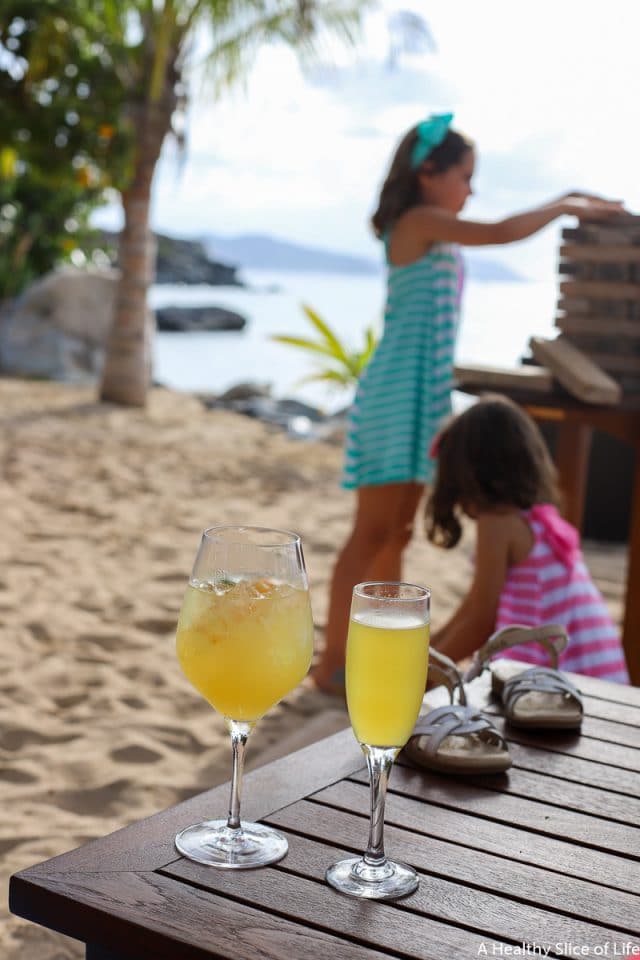 Once the girls saw the swing at the bar, they bee lined to join me. We ordered them virgin pina coladas and the nice bar staff even brought them some fresh fruit to accompany it. 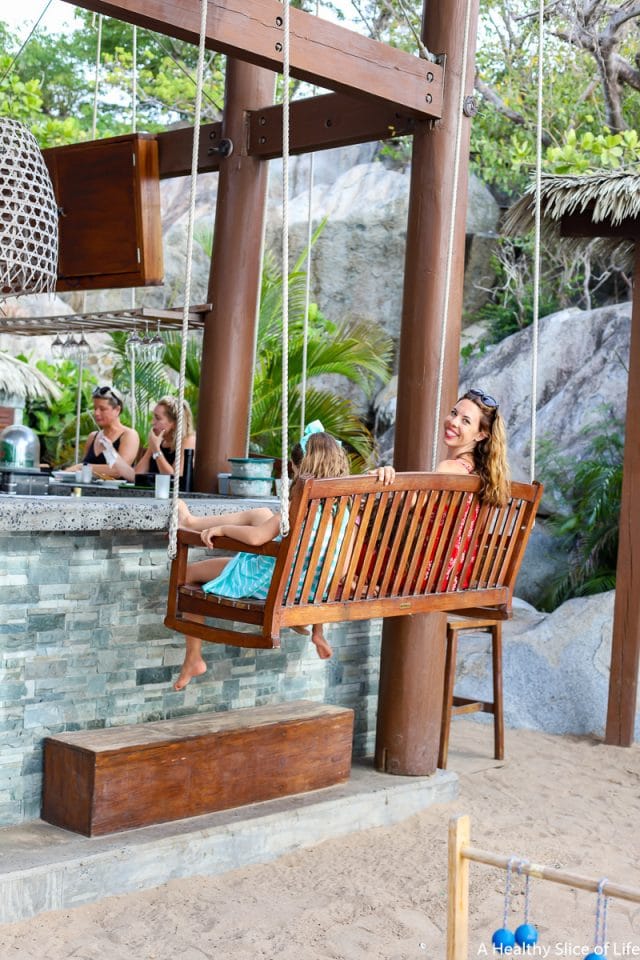 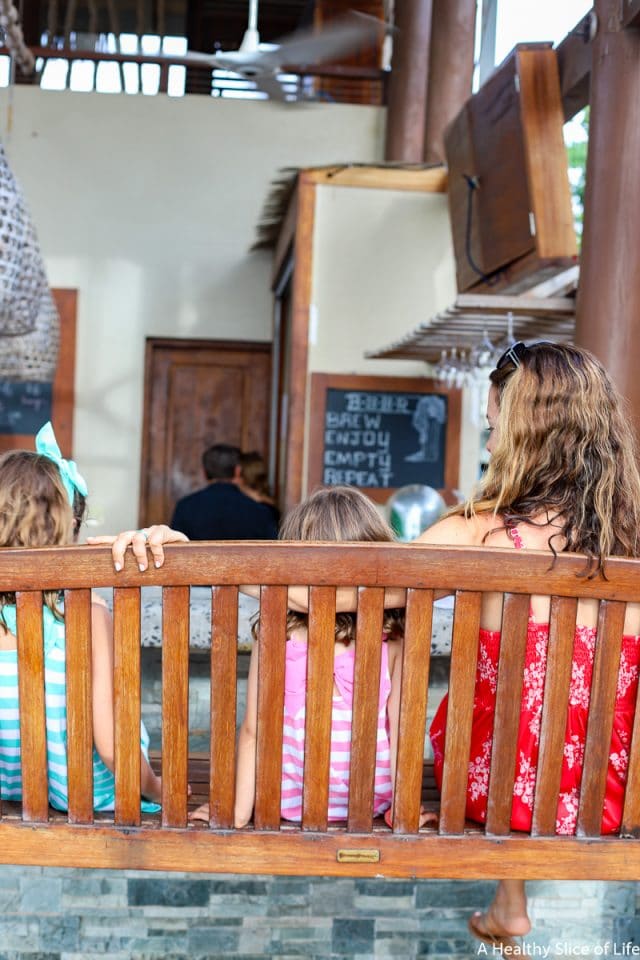 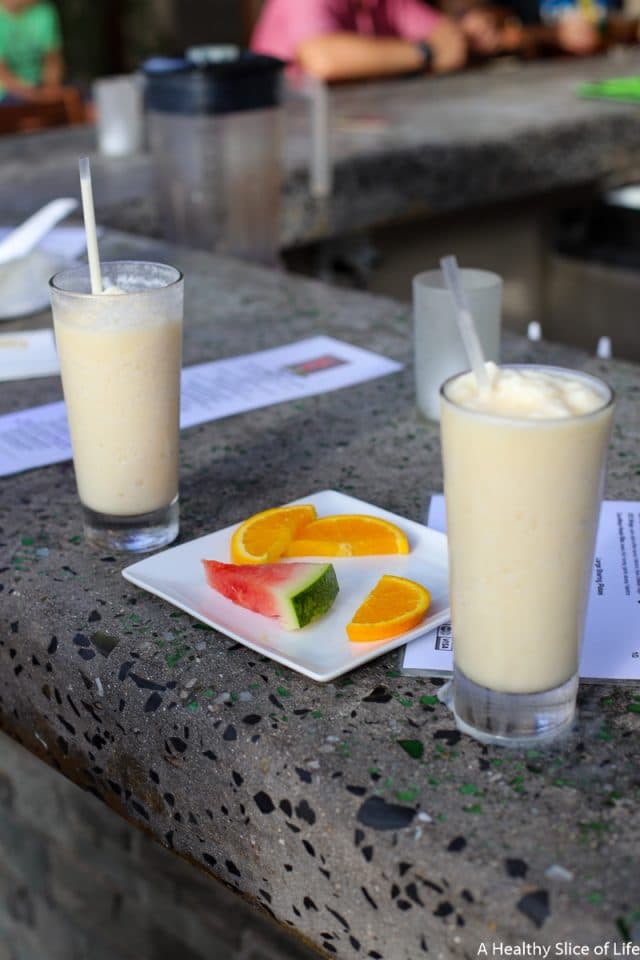 By this time the happy hour crowd started to taper out, and slowly the dinner patrons started to trickle in. At our reservation time, 5:30 PM, it was still fairly empty. The heat of the day had just started to dissipate and I’m not sure if it was the effect of the champagne cocktail or the DJ softening his music choices just slightly, but both David and I both began to ease into the atmosphere.

We delayed our reservations a bit while we settled up at the bar and took our table at around 6:00 PM. Our seats were right by the railing so we could watch the girls play while we ordered margaritas- a jalapeno margarita (his) and a spicy Thai basil (hers). 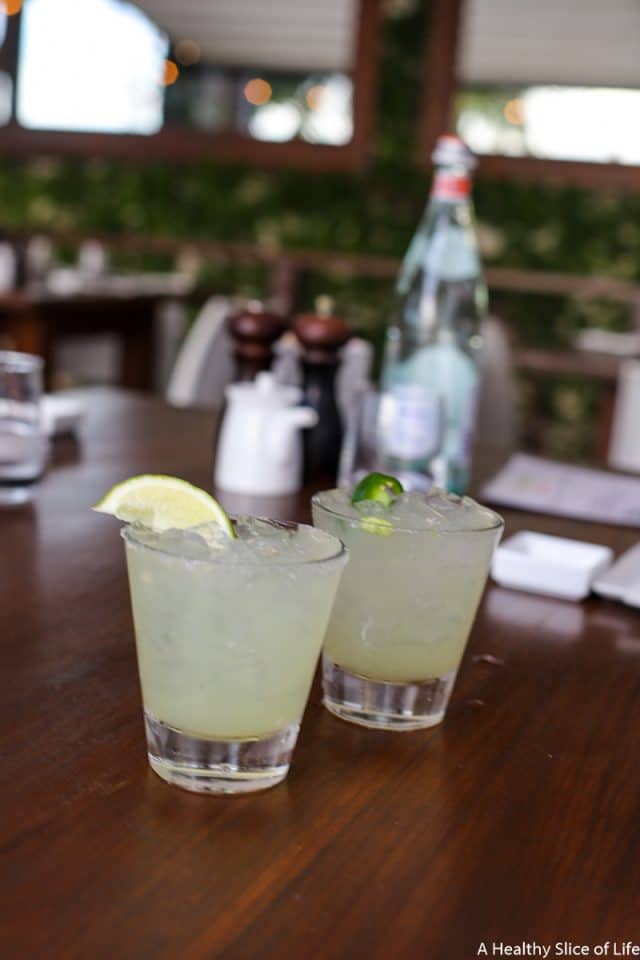 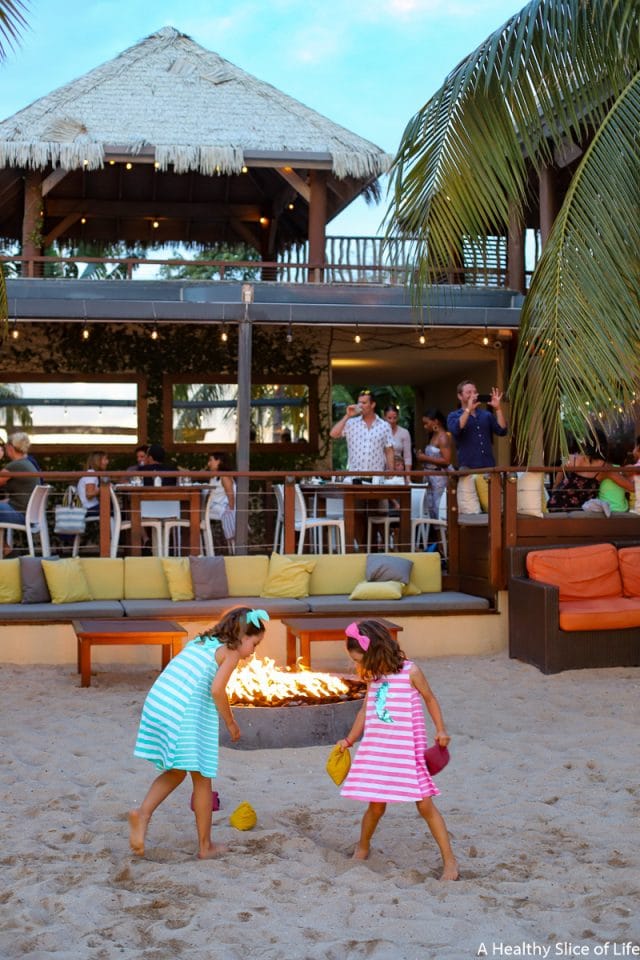 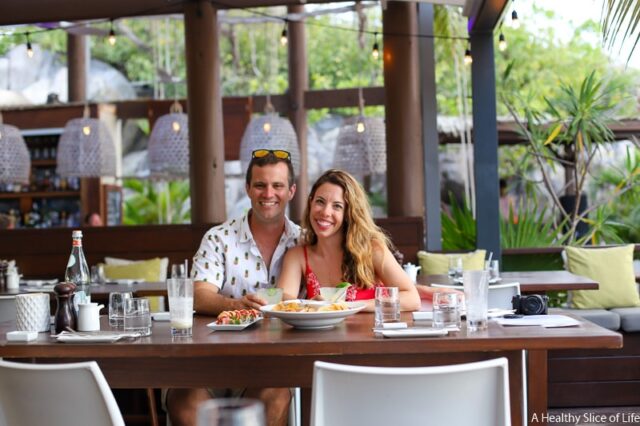 The sun was dipping low in the sky when we ordered our first appetizers- the local root vegetable chips with salsa and guacamole, the Virgin Gorda roll (crab salad/avocado/cucumber/red tobiko/mango puree/kewpie mayo), a spicy crab salad and jalapeno roll with sriracha, and a mango and crab salad avocado roll. 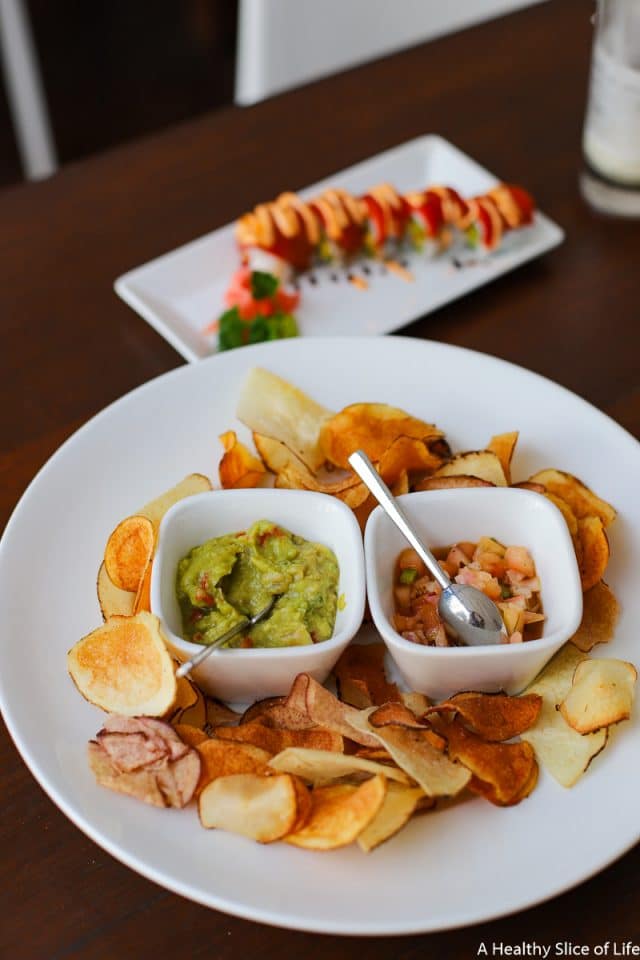 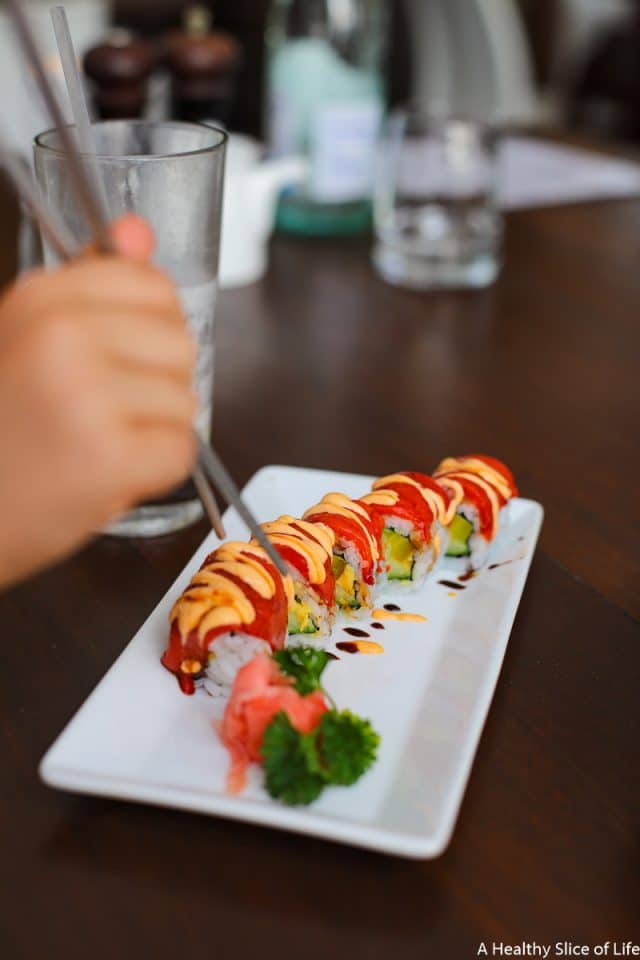 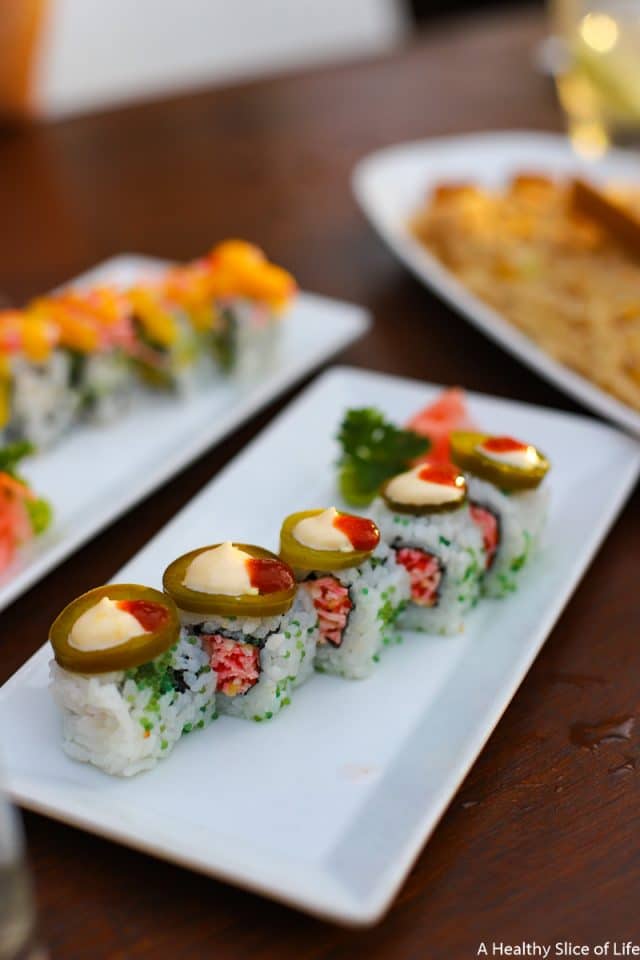 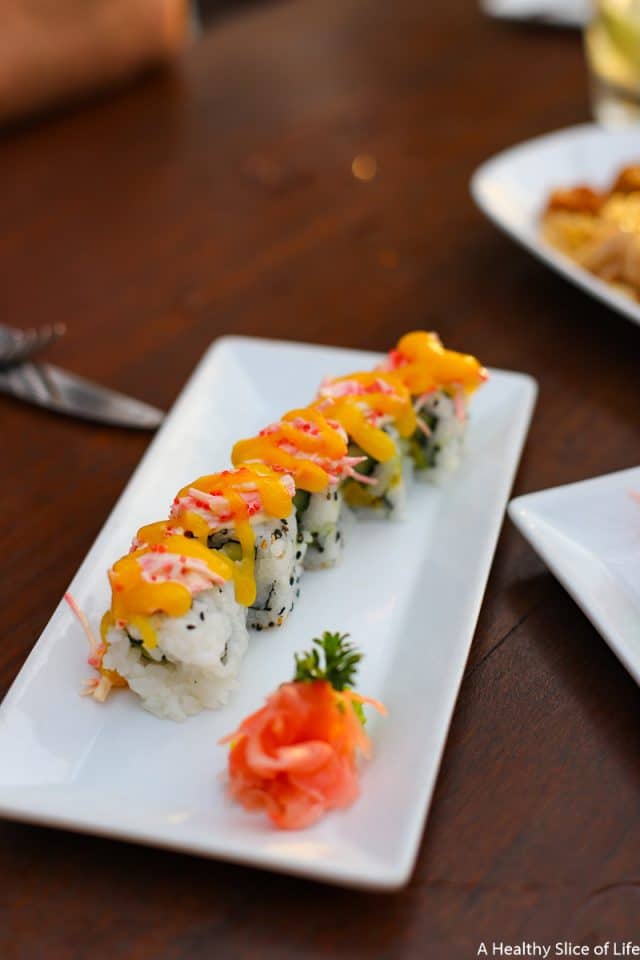 At the appearance of food, the girls ran to join us at the table and we descended upon the plates like a plague of locusts for two reasons. First, we were all pretty hungry by this point, but two- it was possibly the best sushi I’ve ever had in my life.

I had heard the food was good, but this was clearly next level cuisine. The flavors were fresh and vibrant. The amount of heat on the spicy rolls was just right and the accompaniment sauces added just a pop of flavor and didn’t overtake the taste of the rolls themselves. I’m going to dream about this sushi for years to come.

Encouraged to try more from the menu, we took our server’s suggestion to try the Pad Thai and also ordered the duck tacos. The tacos were good but didn’t wow me, but the Pad Thai was on the same level as the sushi- phenomenal. 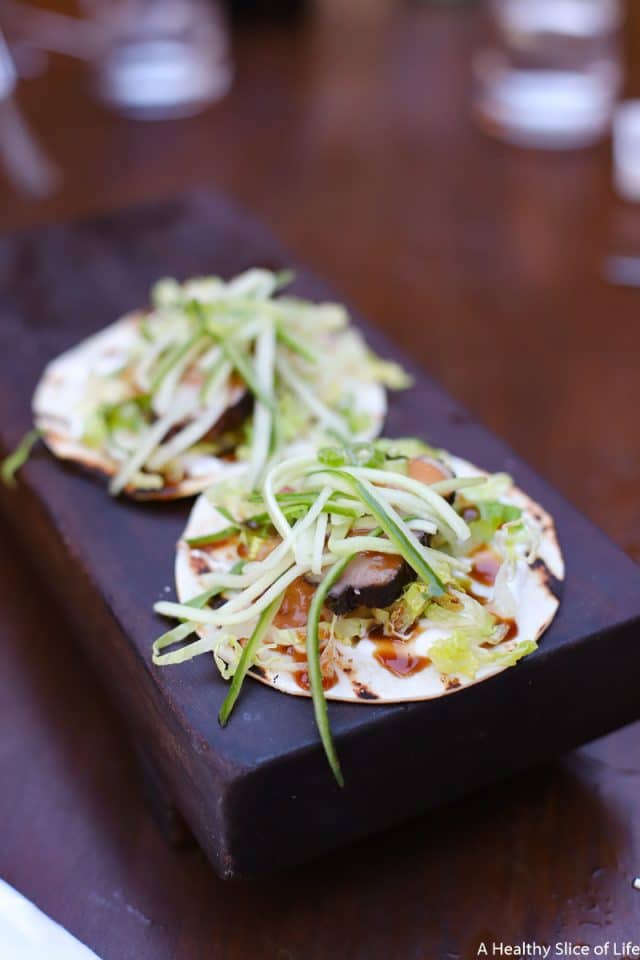 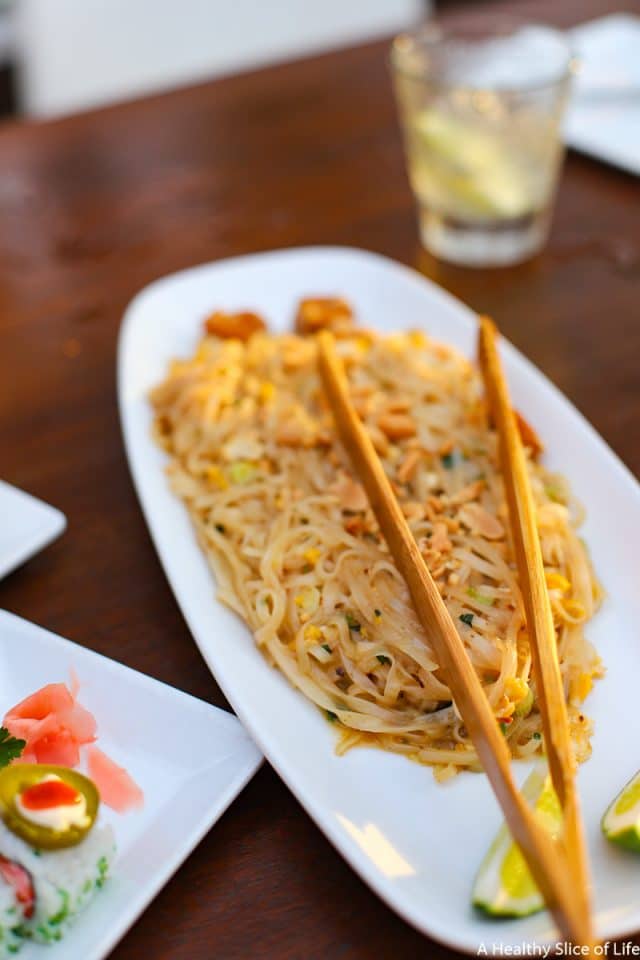 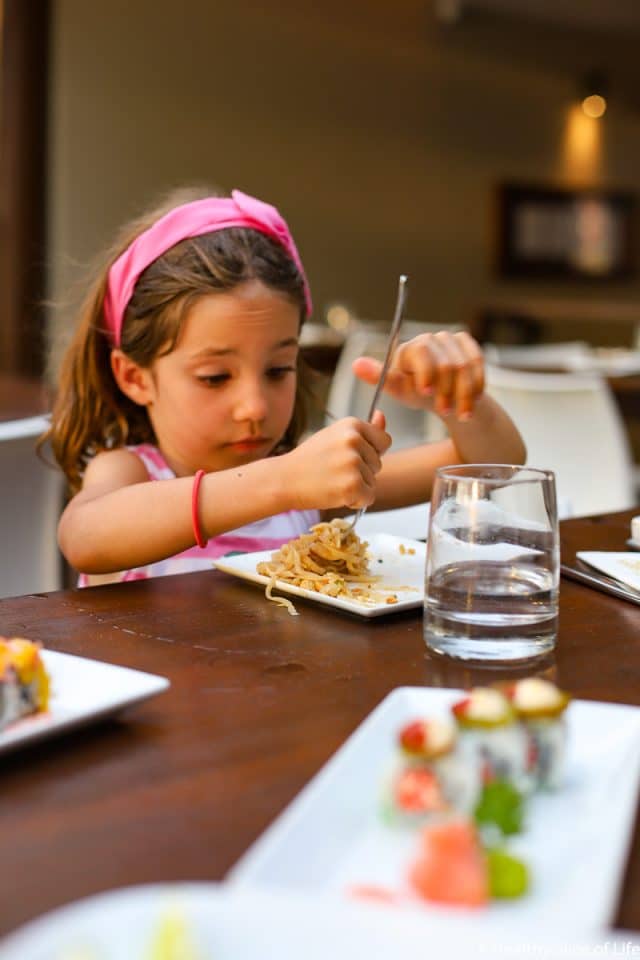 By this point in the evening, CocoMaya was really filling up. Tables of couples out for a romantic evening and tables full of laughing sailing friends with their children brought a warmth to the atmosphere as the DJ settled into playing music that was much more our style, like slowed down Michael Jackson medleys and “Easy Like Sunday Morning” remixes.

It might have been the margaritas talking or maybe the sun starting to fall below the horizon, but by this point the night felt magical. 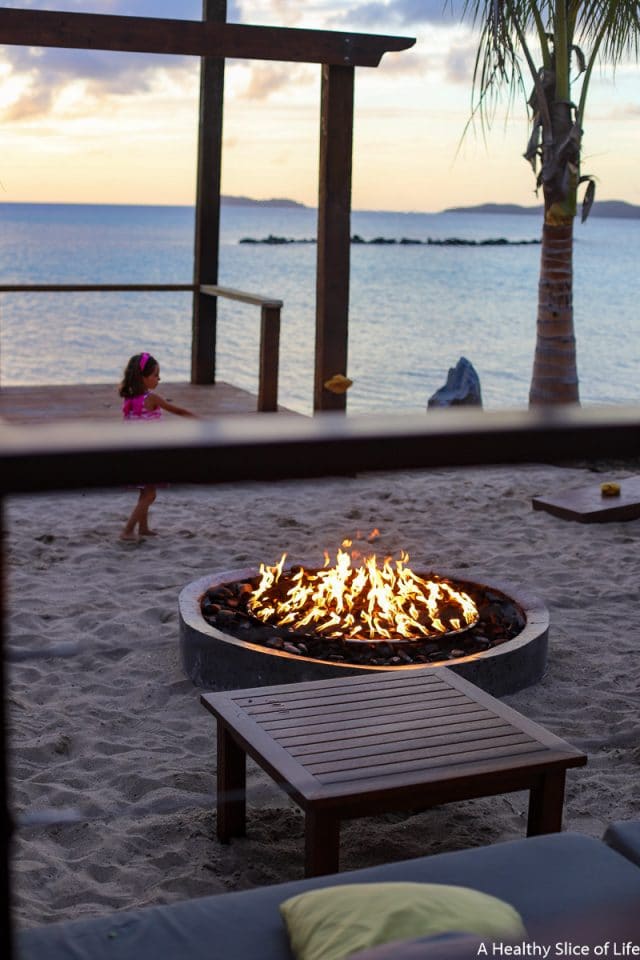 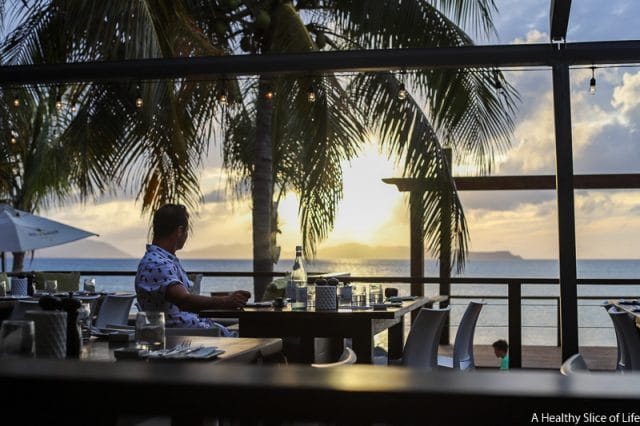 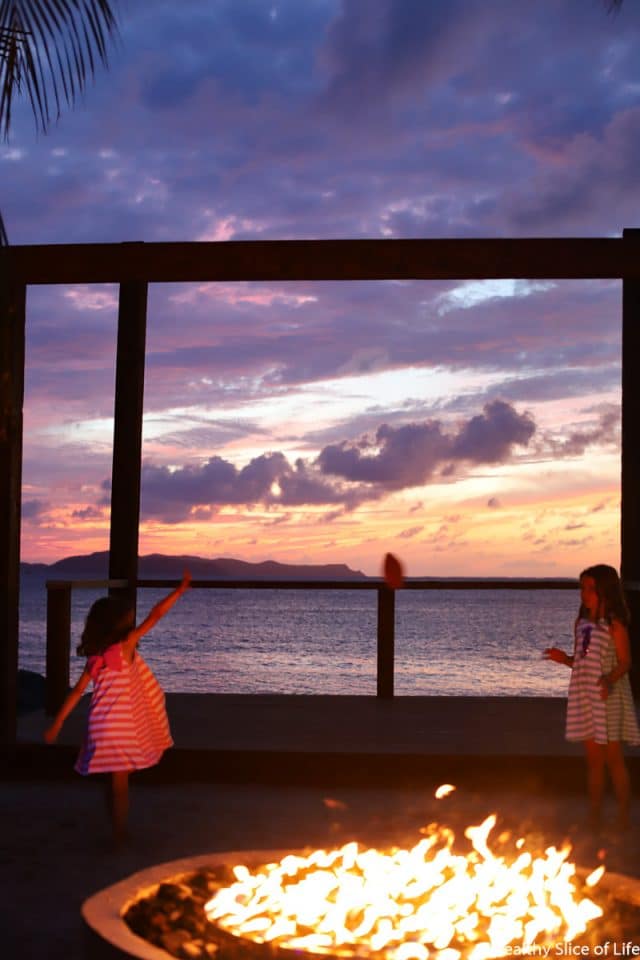 We dragged out the evening for as long as we could, moving from our table back down the the ocean-side lounge sofas. We finally decided to call it a night when there was just enough of a faint glow left in the sky to to lead us down the dock to our dinghy. David had brought a flashlight and headlamp to help guide us on a slow ride back across the harbor to our boat.

CocoMaya Restaurant was the perfect exclamation point at the end of an incredible week and if you’re going to be anywhere nearby, I’d highly recommend adding it to your itinerary. 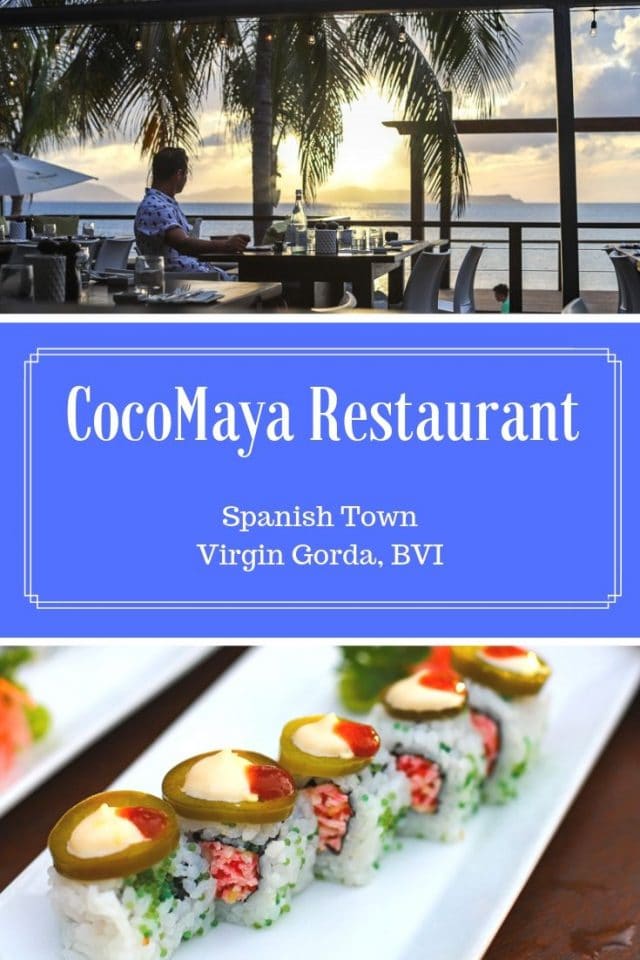