I love impromptu getaways so when Katy told me she and her family would be vacationing in Asheville for the week, it gave me the perfect excuse to pull together a road trip! Doing so meant I could finally meet my internet friend IRL and we could take advantage of the beautiful upturn of weather and get in a family hike. The girls and I took off late morning on Wednesday and met David in Morganton before heading into Asheville together. We booked a hotel when we were an hour out and ended up snagging the last room available at Hyatt Place Downtown Asheville. 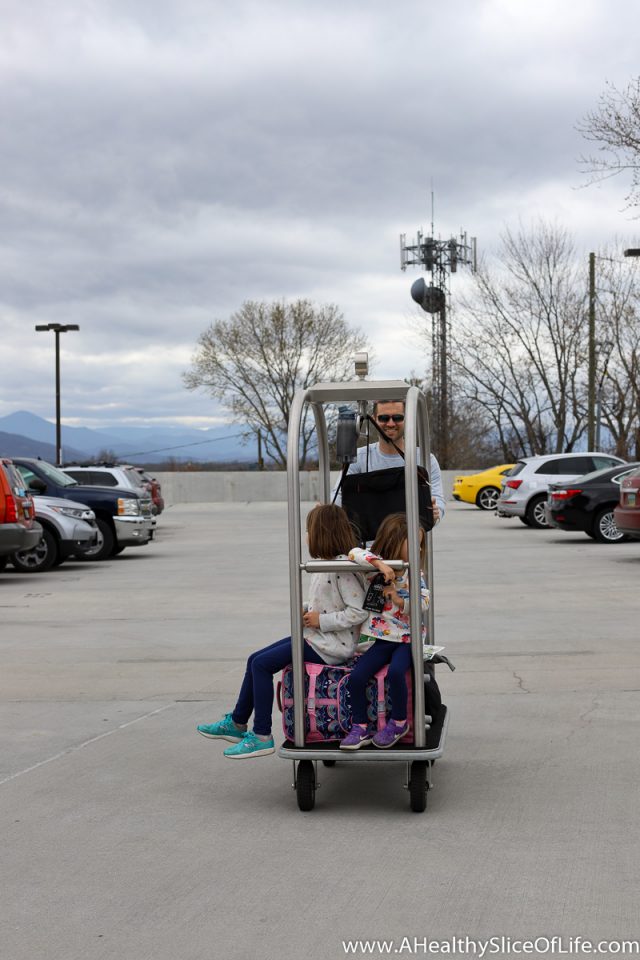 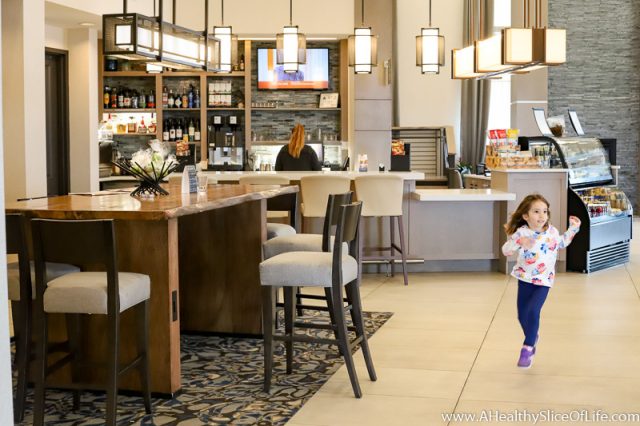 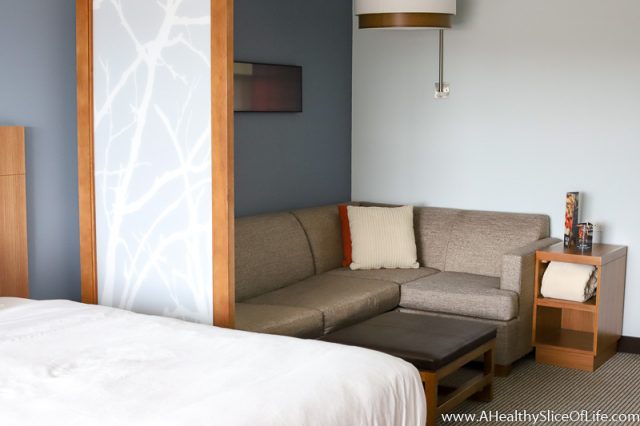 As you can see from the above picture, all the rooms at The Hyatt feature a “cozy corner” which is not only extra space, but also a pull out bed. Between that and the two queen beds in the room, it worked out really well for our family of four! They also offer a free breakfast buffet (that was pretty decent!).

We settled in, explored the hotel, and went to walk around the city, which we quickly realized wasn’t that fun OR relaxing with a three year old who just wanted to run. So we turned around and decided to check out The Montford, the rooftop bar at The Hyatt, which turned out to a be a super cool spot with a great view! A Carolina Fog (social house vodka, Asheville tea company earl grey tincture, house made winter herb & honey soda) for me and root beers for the girls quickly made it feel like vacation. 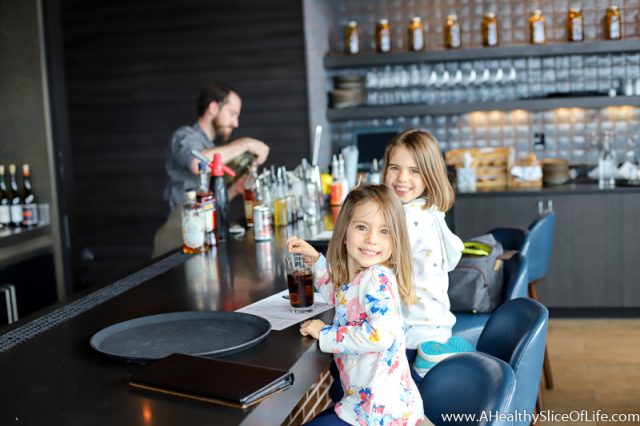 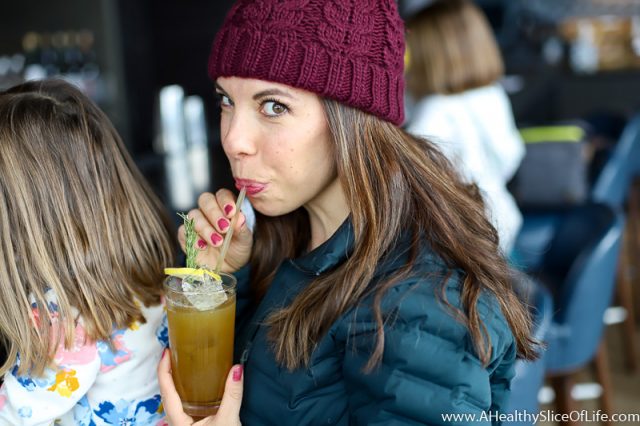 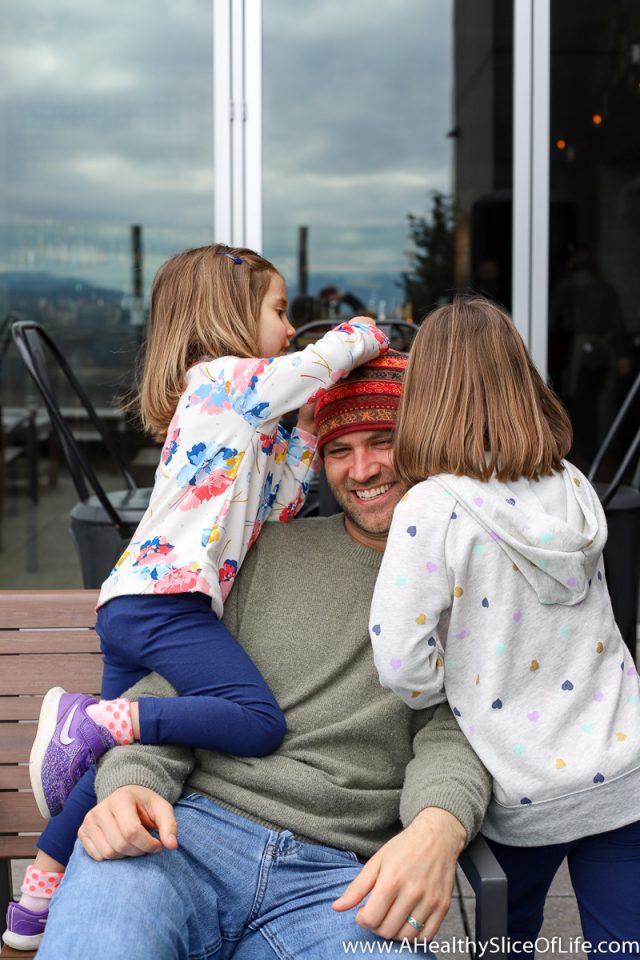 Late afternoon we walked the half mile over to Asheville Pizza and Brewing where we met up with Katy, her husband, and their adorable girls! I love kids for many reasons, but one of the best things about kids is their ability to immediately befriend each other, which our girls did, running around, laughing, playing games and entertaining themselves while the adults had just as much fun talking, tasting flights, and eating pizza slices that were bigger than our heads.

I’ve worked with Katy and I’ve been friends with her through the internet for a while, so meeting in person felt like hanging out with someone I’d known forever! It was such a fun evening and after we  parted a few hours later, the first words out of Hailey’s mouth were- “so when do we get to play with them again?” 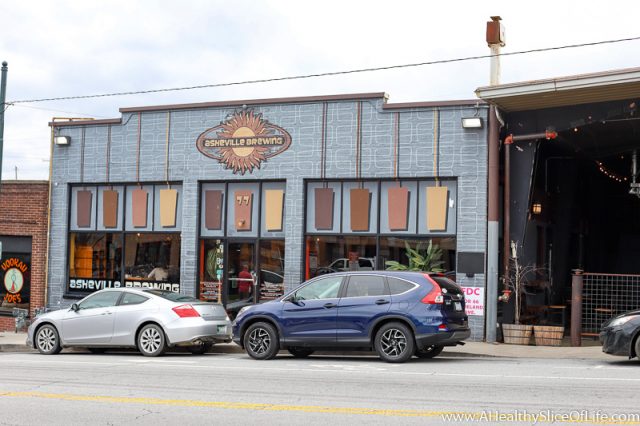 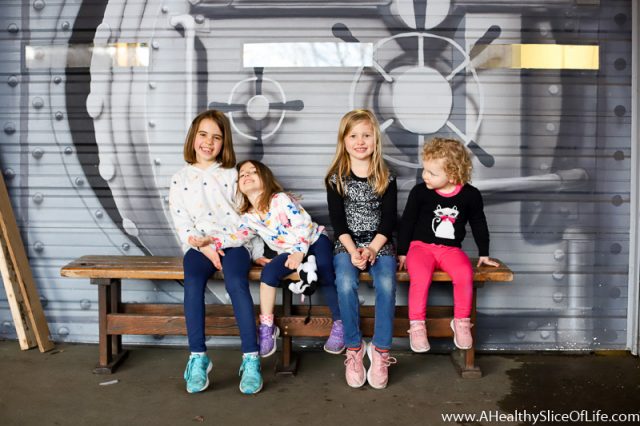 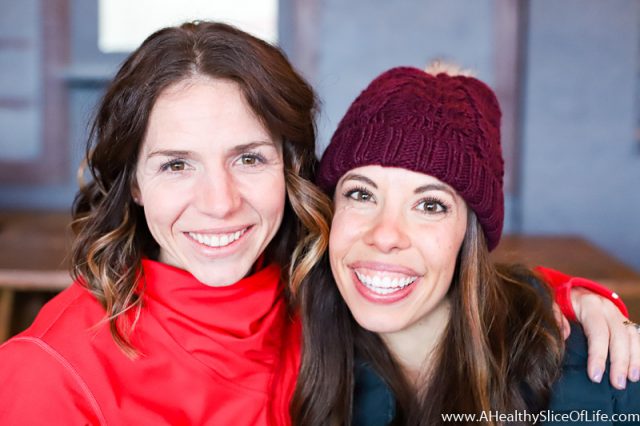 We all were asleep by 9:30 PM and woke up at a respectable 7:30 AM (friends with babies and toddlers- it gets easier!). It felt like a sin to be in Asheville with all it’s incredible breakfast options and not partake, but since we had places to go and mountains to climb, we enjoyed our quick, free buffet and headed southeast to Chimney Rock. The 45 minute drive is my kind of beautiful: rolling hills, farms, and streams galore. We passed by the well-known Hickory Nut Gap Farms and stopped along the way just to soak in the river views. 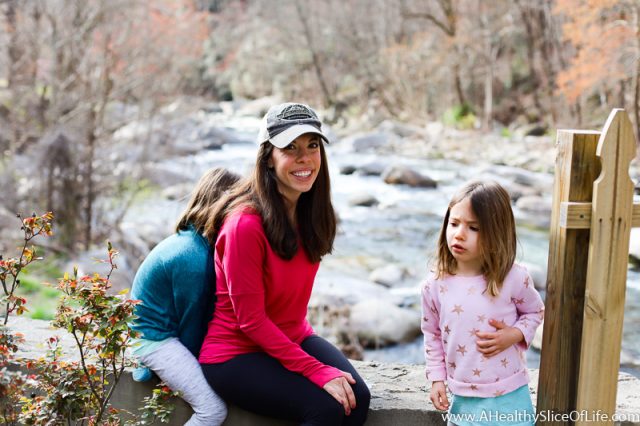 We arrived at Chimney Rock State Park mid-morning, bought our entry (ages 5+ must pay to get in), and easily snagged a parking spot. At this time the park was fairly empty and it felt like we owned it. The weather was gorgeous and we all quickly wished we had packed shorts and t-shirts instead of pants.

After exploring the real bat cave we took off up the flights of stairs towards Chimney Rock. When we made it, we took in the view and watched them raise the American flag. It was a really neat experience. The girls weren’t tired and asked to keep going higher, so we explored every nook and cranny, all the way to Exclamation Point, the highest point at Chimney Rock State Park. All that was well and good, but that then meant we had to take all those stairs down too! Both girls impressed us and Hailey tackled in all with ease and Kaitlyn made it all the way up and a small portion of the way down before resorting to David’s shoulders. All in all we climbed over 2,000 steps and wow, my legs felt it! 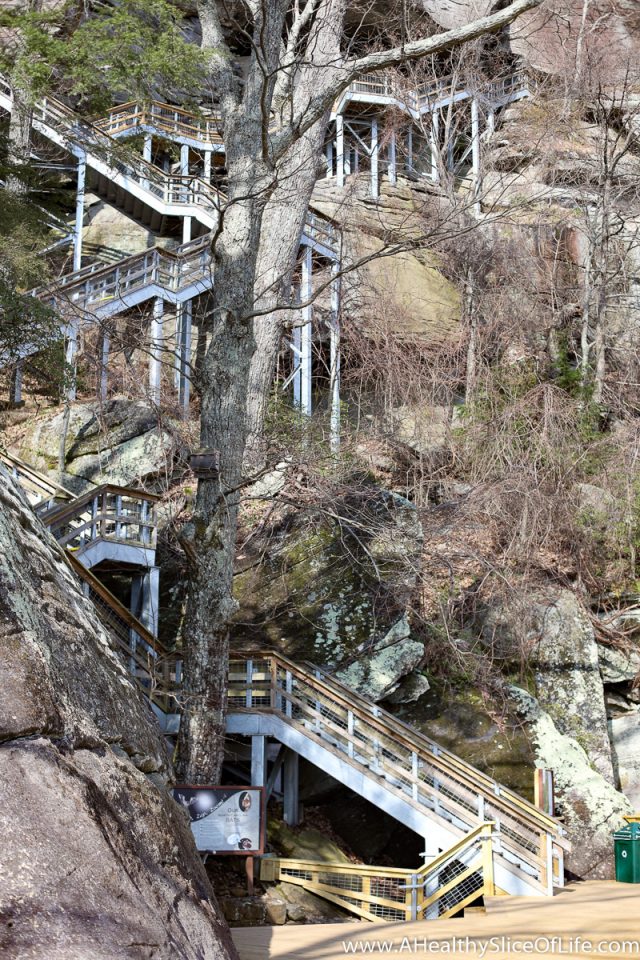 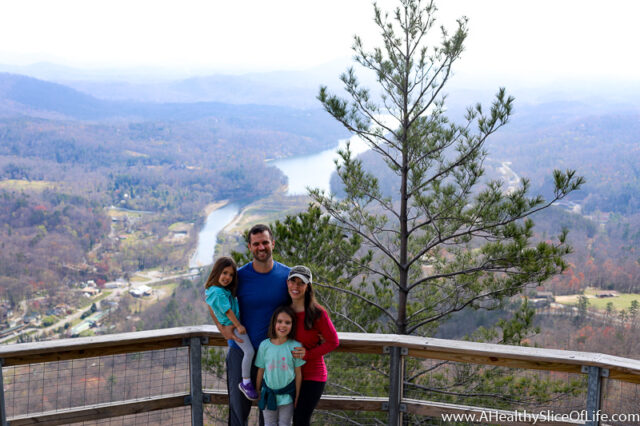 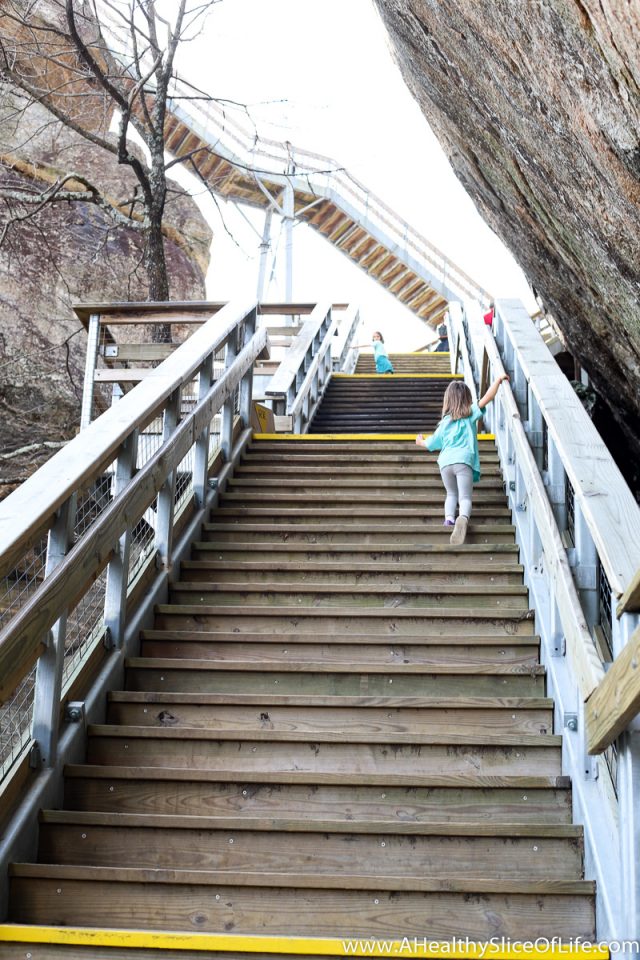 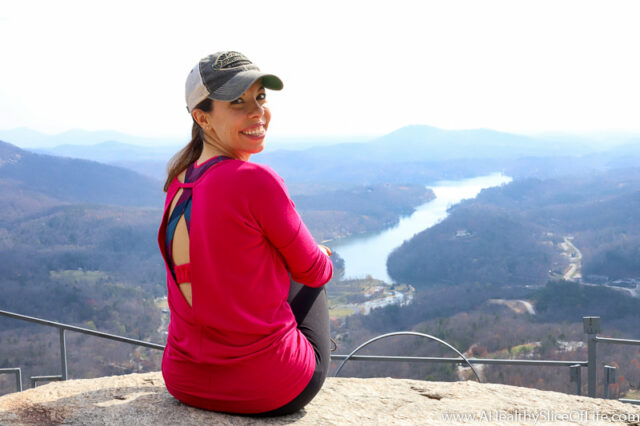 By the time we made it down, the park was slammed- not a single parking spot to be found. It was tempting to call it a day since we were all starting to get hungry and we had just climbed the equivalent of 50 flights on stairs. However, there was a 400 foot waterfall to see and we just couldn’t pass that up. We heard it was a 45 minute round trip hike (only 3/4 mile to the falls) and decided we could swing it. I’m so glad we did!

Hickory Nut Falls was majestic. It is the second highest waterfall of its kind east of the Mississippi River and a backdrop for several scenes in the movie The Last of the Mohicans. We gawked and David even climbed out on the rocks with the girls to feel the spray. I’m so glad we didn’t opt to skip it! 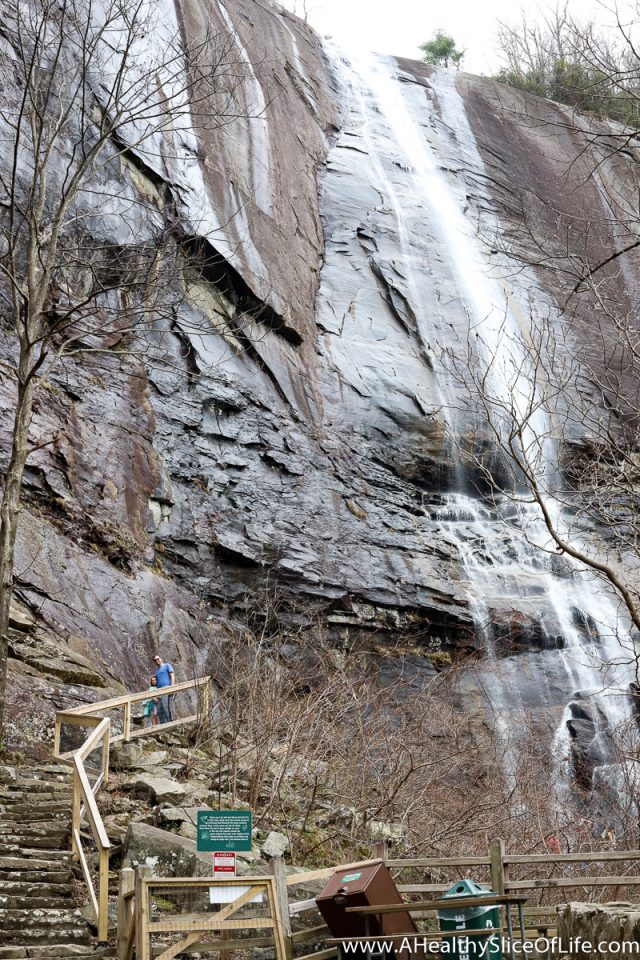 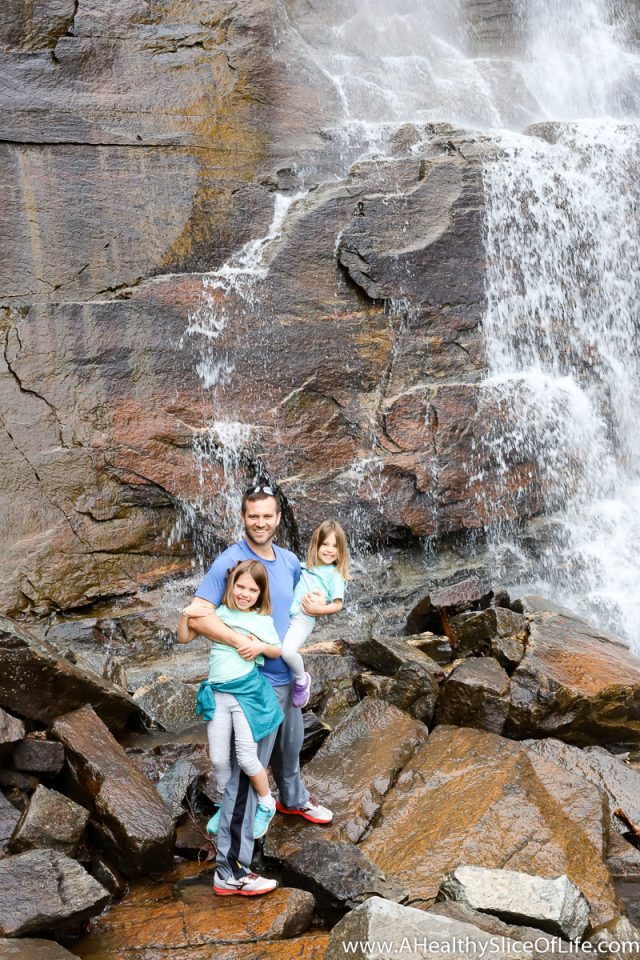 We arrived back to the car around 2:30 with tired legs and raging appetites. The cute town outside the entrance of Chimney Rock State Park offered a few restaurant choices and we opted to sit on the back deck at River Watch Grill for the sole reason that it overlooked the river. It offered typical bar a grill food, including about 30 variations of a burger, including black bean burgers. While we waited for our food the girls chased butterflies on the path beside the river while David and I relaxed and breathed in that mountain air. 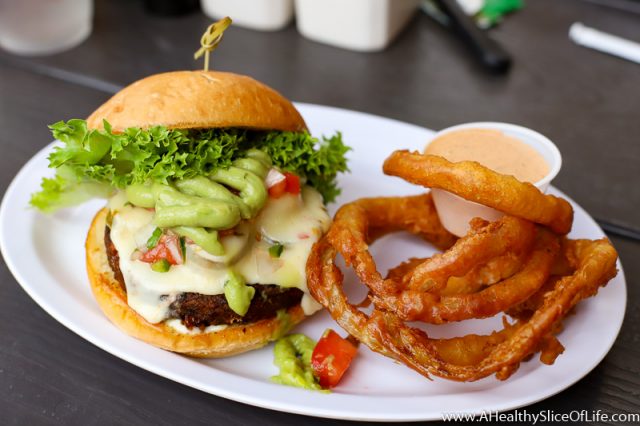 We all inhaled our meals and were in the car headed home by 4:00 PM. We took the scenic way back to David’s car, around Lake Lure, and again, enjoyed seeing all there was to see- cute restaurants, fancy houses, farms. Kaitlyn passed out and Hailey zoned out, making it an easy and quiet ride back home.

We really enjoyed Chimney Rock and are going to make a list of all the NC parks we want to see so next time the opportunity arises for a quick getaway, we’ll have our destination ready to go! A Few of our favorites we’ve visited thus far are:

Friends in the area- are there any must-visit parks we need to put on our list?

I look forward to the day when we can add state parks from all over and go for longer road trips too!