With the baby due in early May, there were several tasks I hoped to accomplish before then: getting rid of the pacifier, potty training and transitioning Hailey into a big girl bed in her new room.

When February rolled around, I realized we had yet to do any of it and time was ticking. We decided to start with what I hoped would be the easiest transition- the big girl bed.

Being that our nursery is gender neutral and all set up for baby, we decided to turn a guest room into Hailey’s big girl room. It was quite the project and took a few months to work on. Here is the before… 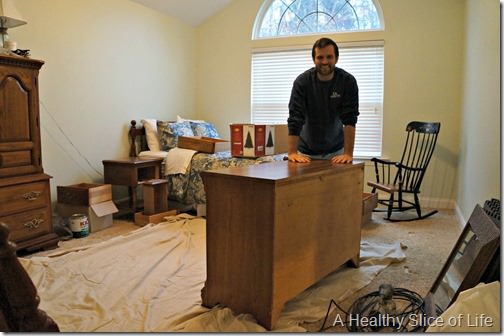 Tasks on the list included installing a light fixture and fan, fixing plumbing through the closet wall, painting the furniture, installing curtains and buying bedding. David wasted no time on the Mr. Fix-It side of things… 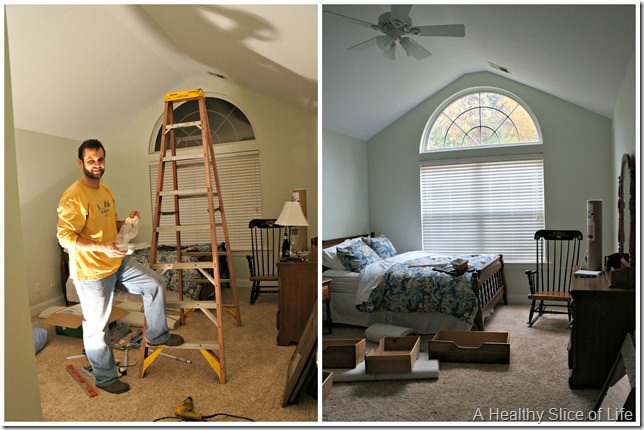 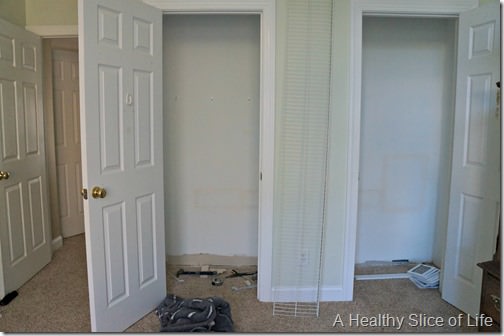 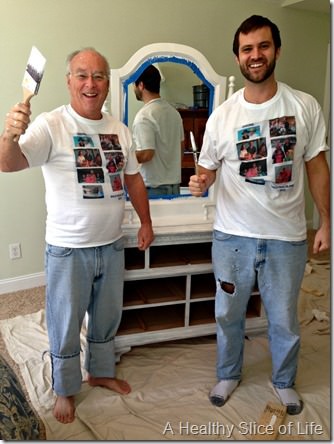 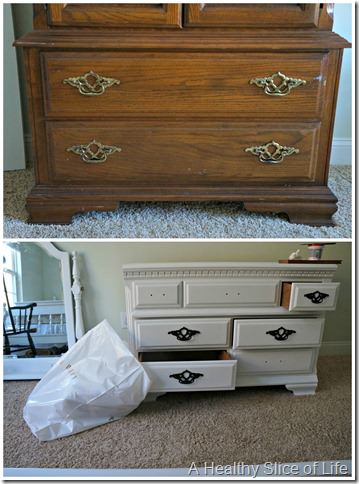 During the entire process, we talked to Hailey about how we were creating her BIG GIRL room and her excitement grew. Finally, it was time to reveal it to her! 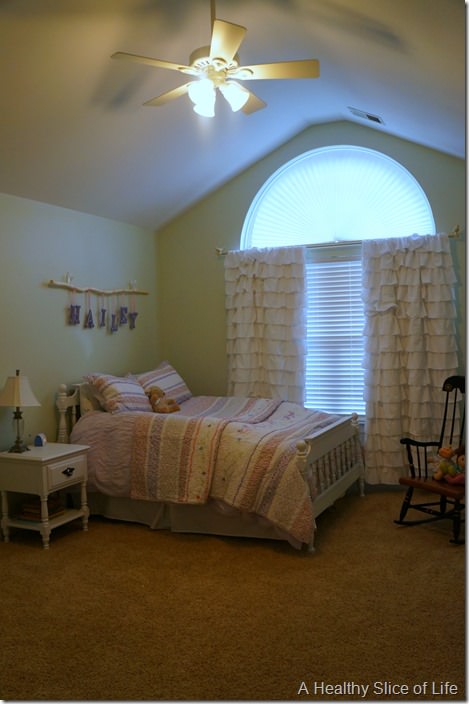 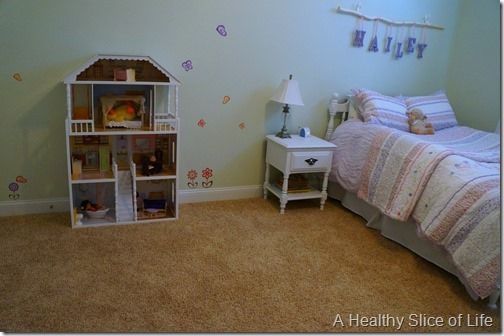 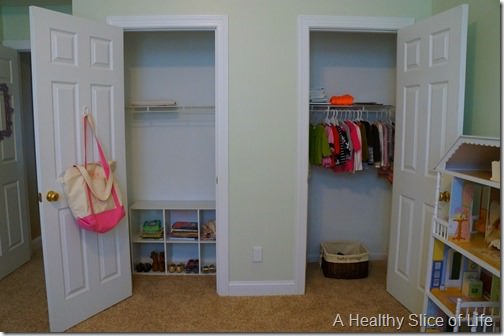 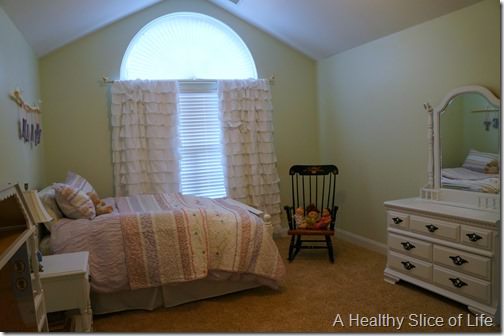 I want to add more to the walls, but overall I’m so pleased with the results. The walls are a light green, but it doesn’t really show in pictures. It feels girly and cozy and most importantly, Hailey loves it. She loves the birds on her curtain rods and sheets and the butterflies by her dollhouse. Personally, I want to sleep in her bed now instead of my own. 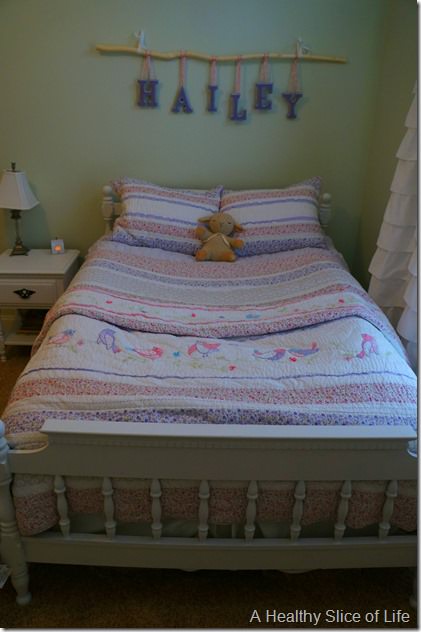 The build-up worked and Hailey was excited. She kept asking “sleep in big girl bed??” and finally we decided to bite the bullet. I was nervous because her sleep habits are awesome and rocking the boat sounded not only daunting, but possibly just plain dumb. Still, it was time.

We started the bed time routine about 15 minutes earlier than usual that night, leaving plenty of time for books and snuggling. Being the sap that I am, I came up to snap pictures and read one book before handing the reins over to David. 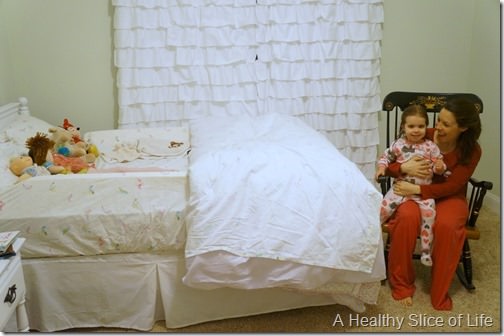 Then I went downstairs and watched on the monitor. David read a couple books, then they rocked and sang and finally he checked that she had all the necessities: two pacis, the sleep sheet, pink blanket, a water, 3 babies and books. Toddlers. Then, he lifted and put her into the bed.

Our plan all along was to treat it like a crib and put her in and out for now.

It was surprisingly uneventful and easy. She took about 45 minutes to fall asleep which isn’t uncommon. She never cried for us or anything. She slept through the night and woke up around 7:30 the next morning, staying in her crib and reading like normal until I grabbed her at 8am.

I was more nervous for nap. We purposely did not make her big girl room as dark as the nursery in hopes that she wouldn’t need it to be pitch black to sleep. We followed our normal routine…

Now to answer a few questions…

Have her sleeping habits changed at all?

Nope! I was nervous because for one nap time, she refused to sleep, which also happened sometimes in the crib. However, same as the crib, she played with her dolls, read books and rested for 3 hours until I grabbed her.

Has she realized she can get out on her own?

Not really. She hopped out once on her own to chase after me. I didn’t make a big deal out of it. I gave her a hug, told her it was time to go night-night and put her back in bed. She stayed. I am WELL aware this will change eventually and I’ll let you know if we run into the problem of her not staying in her room. I’m not looking forward to that!

My hope, though, is that we’ve helped her form the habit of quiet-time and self-play during the afternoon hours. I’m a-ok if she doesn’t want to nap, but still plan to keep the quiet time hours in which she can play in her room.

What are the bumpers in her bed?

I bought these magic bumpers online and am very pleased with them. They are all foam and fit under the normal-sized fitted sheet. The provide enough of an edge to keep her from rolling out, but she can climb over them if necessary.

Does she miss her old room?

Surprisingly, no! I was worried about that, but since moving all her stuff into her new room, she has no desire to go back to her old one. She even refers to it as the baby’s room now. I was pleasantly surprised with this one.

I’m thrilled that the first pre-baby task went so well, but I knew we were tackling the easiest first. Potty training and getting rid of the paci sound so daunting and honestly I don’t know the timeline or plan of attack for those yet, so stay tuned!

Did your kids always stay in the bed or did they eventually start opening the door and coming out?

How did you handle it?