I can’t believe I’ve waited so long to dive into it, but now I’m anxious to play catch up so I can show you my growing belly! I promise to move through these quickly so we can get to present day.

Like I mentioned, I’d been tracking my cycles so I had a good idea of when I ovulated in August. Then began the two week wait. The month prior, I has felt every pregnancy symptom is the book- fatigue, nausea, food aversions, you name it. Mental much?? This time I didn’t feel much. Maybe a slight cramp here or there and a little bloating, but nothing much. The only thing I found weird was that about 10 days past ovulation (still testing negative on pregnancy tests), I realized wine wasn’t tasting as good to me. I’d slowly sip one glass and barely finish it. Say whaaaa? I should have known right then that something was WAY off.

The morning of 13 days past ovulation (for those new to fertility talk, it’s the best way to keep track of timing that I found), I took a test. I squinted and brought it to my nose. A possible faint positive?!

I couldn’t quite tell. I drank a decent amount of water and didn’t allow myself to go to the bathroom. I know, a very healthy habit, but I wanted to concentrate any hormones that might be in me.

That afternoon, I took another test and sure enough, big fat positive!

I did a little dance by myself in the bathroom; I was over the moon! I immediately tried to figure out how to tell David. I always imagined something big and elaborate, but when the time came, I was just excited and wanting to tell him.

I decided a little celebration would be in order. I did a little shopping and ended up telling the uninterested cashier I was pregnant because I couldn’t keep my giddiness inside. He asked how far along I was and I said oh, about a day. He gave me the world’s greatest crazy lady look, but I couldn’t have cared less.

When David got home and we put Hailey to bed, I told him we had reason to celebrate. I pulled out a 6-pack of fancy mix-n-match IPAs for him, then proceeded to pull out ice cream…. then pickles. 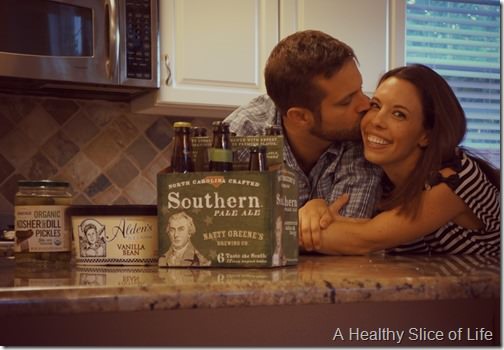 Between the goodies and my goofy smile, he got the message pretty quickly.

A few big hugs and giddy really’s?!? later, we settled into the couch, talking excitedly about the craziness life was going to become and possibilities of what our new child will be like.

For the next week I did my classic ‘I’m not really sure I’m pregnant because I don’t feel anything yet’ dance that David insisted I also did while pregnant with Hailey. I tried to feel things, but besides a slight headache here and there and extra short nap or two, I just didn’t feel like it was real. I kept up my normal eating and exercising, figuring I’d better squeeze in veggies while I could!

The following week, things began to get a bit more real. Smells started bothering me. Koda smelled revolting. I had hints of queasiness here and there and one day my entire right arm felt numb and tingly. I noticed my bra feeling more snug and actually discovered a lump under my left arm. I freaked out immediately, picturing breast cancer. Like I mentioned, I’m driven driven by illogical emotions at times, but I’d never had anything like it. I quickly called my friend Katie, who is an obgyn, and she assured me that cysts that pop up quickly are often hormone related.

By then, my nerves had kicked in and I decided I needed some confirmation on pregnancy and the lump being benign. The next day I booked an appointment to go into my doctor. I made the appointment on the day I estimated I would be 6 weeks along. Being that my parents were visiting the following weekend, I loved the idea of a little confirmation before sharing the news.

It turns out that my math might have been a little off on how far along I actually was, and thus began my first anxious wait of pregnancy. To be continued!

If you’ve been pregnant, how did you tell the dad-to-be?