Every so often I just feel like I need to embrace that truly momish side of me that wants to gush all the adorable details of my children’s existence. Today Kaitlyn turns 17 months, so I’m using that as a weak excuse to share with you all the fun going on with my sweet baby girl lately! 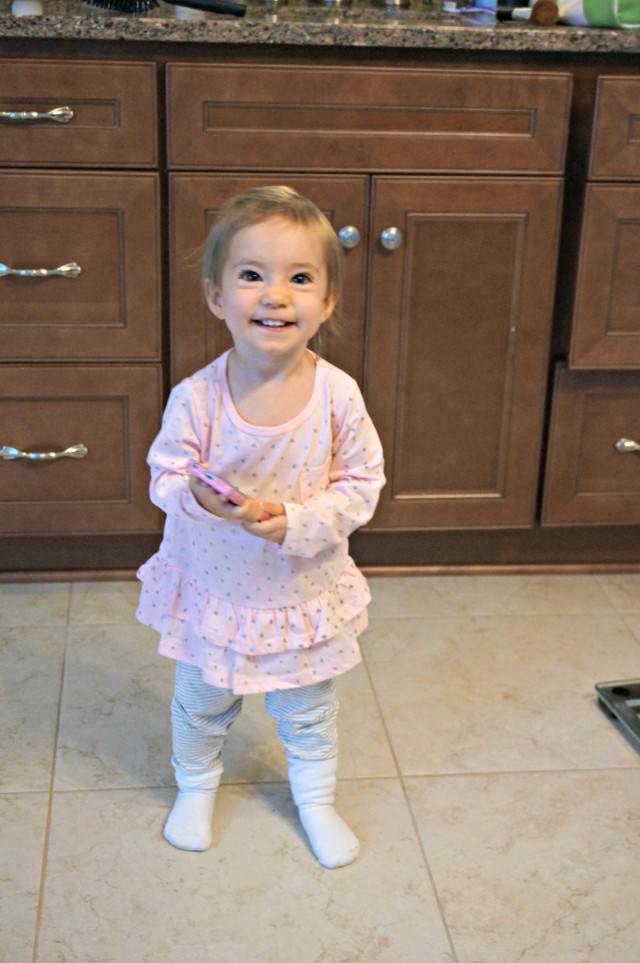 So indulge me if you don’t mind? …or click out. I’ll never know!

I know I’ve shared with you how Kaitlyn’s eating habits differ from her sister’s, but dare I say she’s coming around a bit? She tends to try most anything on her plate, but it doesn’t mean she necessarily eats it. She’ll do the famous “eat olives one day and spit them out the next” that toddlerhood is known for. Still, she seems to be eating larger quantities and varieties lately which I’m excited about.

My secret weapon that pretty much guarantees her to eat anything? KETCHUP. She loves it and will pretty much eat anything if she can dip it in ketchup. I buy the organic kind so does that make it better? Haha. I don’t give it to her at every meal, but when I do pull it out of the fridge, she points furiously to her tray and chants “deh deh” which is her version of “down.” 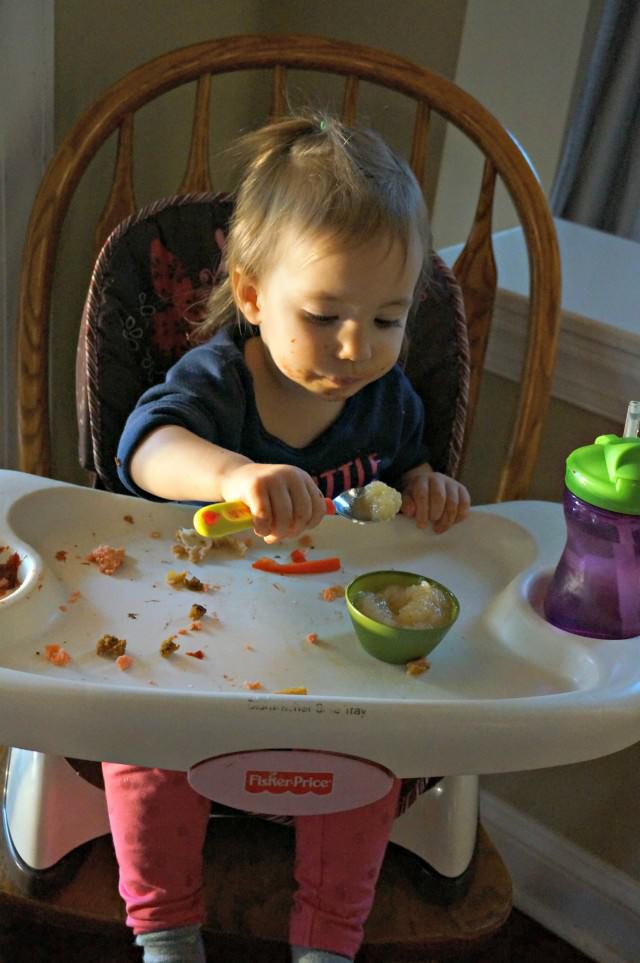 She won’t let me feed her even a little bit, but I’ll say she has the spoon and fork down pretty well. Her favorite foods at the moment include berries, oatmeal, yogurt, spaghetti, broccoli, applesauce, Bitsy’s Brainfood cookies, hearts of palm, muffins, tomatoes, salsa (mild) and anything I”m eating. Really, she will eat arugula and feta if it comes from my bowl, but put it on her plate? Forget about it!

She doesn’t drink milk, but I am still nursing. Morning and evening. She’s getting the age where I get some uncomfortable looks from people if I mention it, but it really doesn’t bother me. Maybe it’s the last baby thing and I see we are heading in the direction of weaning, but I’m just fine with it. And if I’m being honest it melts my heart when she snuggles up to me after bath, pats my chest and says “mah mah.”

For naps, I spend a few minutes singing songs with her, then kiss her, give her bunny and say night night. Sometimes she will fuss for a minute, but usually she lays down and goes right to sleep.

Now for the fun…

Kaitlyn keeps me smiling all day long. She is so happy. She is also into everything. She loves to climb and will push chairs over the counter tops to open (and empty) drawers and cabinets. 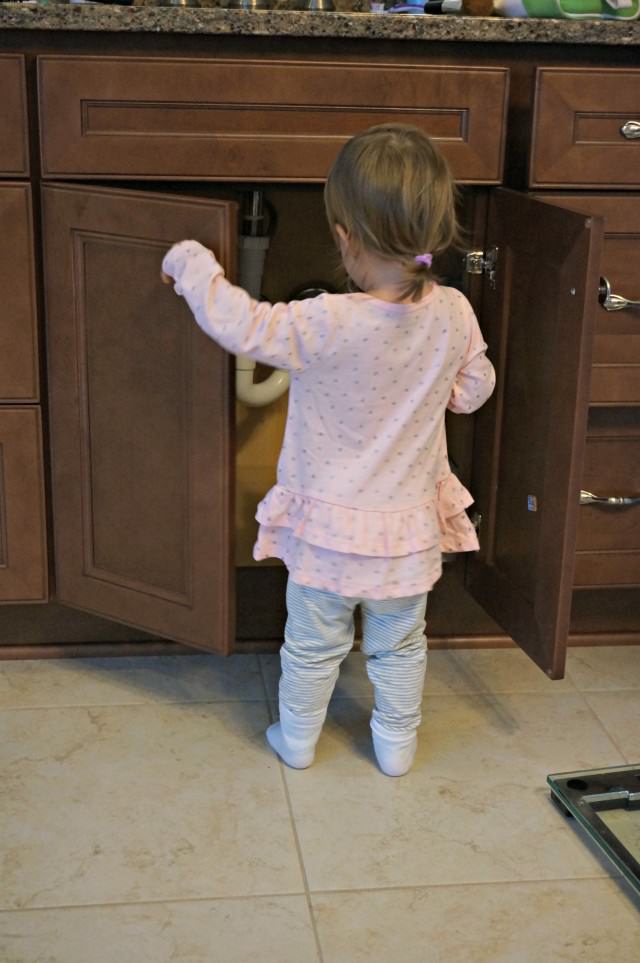 She plays well independently, but really loves playing with Hailey. I think it’s funny that she loves following Hailey around but can hold her own when Hailey tries to treat her more like a doll than a person. She’s a feisty little thing.

Recently she’s taken a liking to dress up clothes and especially dress up shoes, most likely from watching big sis. 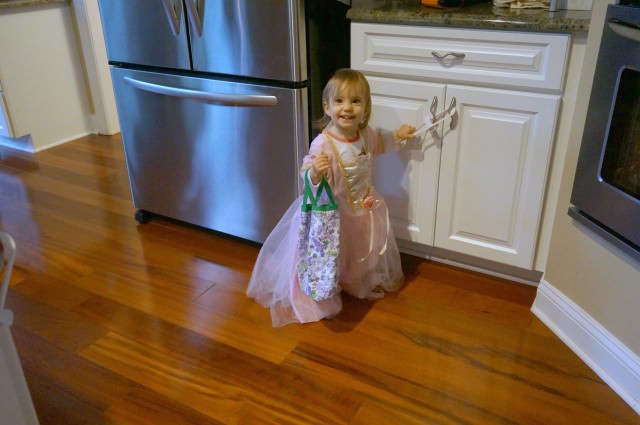 She is talking more and more each day. Some words that come to mind are mama, dada, Hailey (a-ay), water (wawa), bunny (me-e), rock, flower, bubbles (buhbuhs), shoes (shzz), dog (dah), hi, diaper (bahpah), up, bow (boowwww), down, thanks (dayyyy), uh-oh, fish and night night. She very recently started putting words together like hi dada (hiiii dah) and she squeals like a banshee with delight when David or I are gone and then come back. She loves making silly noises with her mouth and saying shhhhh too.

Pretend play is a lot of fun to her and she and Hailey “play doggy” where they both crawl around on all fours and more so yip instead of bark. Kaitlyn thinks this is hilarious. She likes songs and tries to join in (with twinkle twinkle she’ll chat “uppa buh” until the up above line comes around). When we are driving and the song If You’re Happy and You Know It comes on, she’ll shout HOORAY (ayyyy!) on cue and it always cracks me up.

She thinks it’s funny to point out belly buttons (beh-ee-buh) and make people show theirs to her. She doesn’t like being helped and likes to prove she can do things herself. 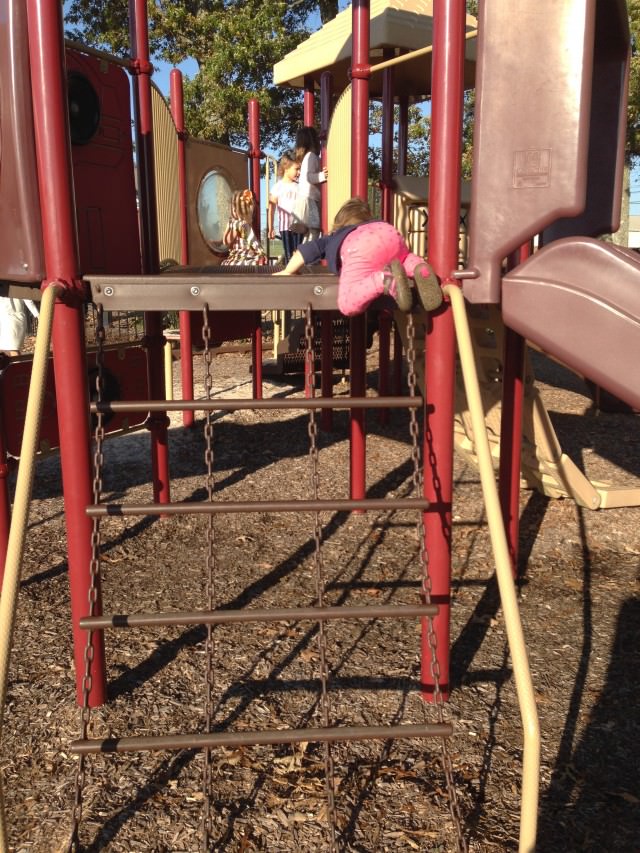 She is taking swim lessons once a week and LOVES it. She just does not stop grinning the whole time that even when I put her under water she doesn’t close her mouth (or eyes) and just grins, then giggle like crazy when she comes back up. She gets a kick out of blowing bubbles in the pool and bathtub too.

One thing she doesn’t love? Being told no. Even if you say it kindly, she’s not a fan. 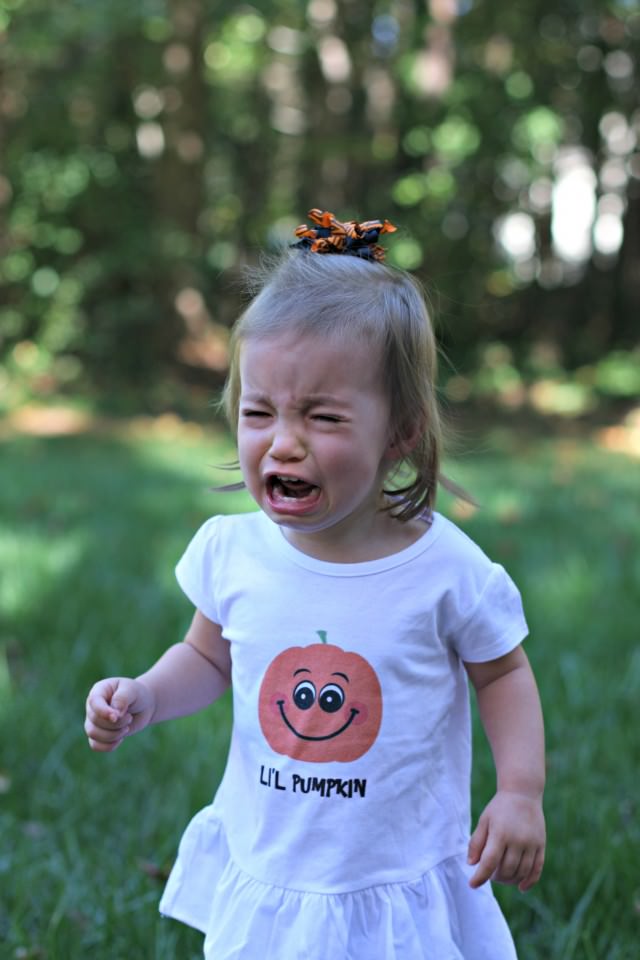 She goes to “school” two mornings a week and has a blast. She hasn’t cried once and always seems to be having a good time when I pick her up.

I could go on and on with little facts about my sweet Kaitlyn. If I had to condense it, I would say she is a really happy, adventurous little snuggler. She gives high fives, fists bumps and the most wonderful, biggest hugs. She will wrap her arms around my neck and say “awwwww” — probably because it’s what I say every time she hugs me. I just can’t get enough! 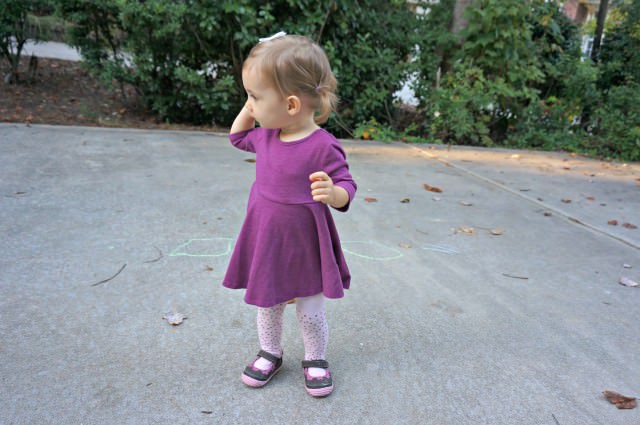 I haven’t gotten a recent weigh in, but she’s a little thing, maybe 19/20 pounds? She just moved up to size 4 diapers, wears 12-18 months clothing and size 4 shoes, which she likes to put on (the wrong feet) by herself.

I know I hide my pride so well, but I love this little girl so much and her big cheesin’ grin never fails to put a smile on my face.

Such a little stinker!!

Ok, did I miss anything? Feel free to ask a question!

Fellow moms, take a minute to brag! What is one thing that you absolutely LOVE about your child?

Or check out all my baby posts and toddler posts!

Have a great weekend!