David should have known it was going to be a long day when it started with me screeching “take my picture in the bagel shop!” 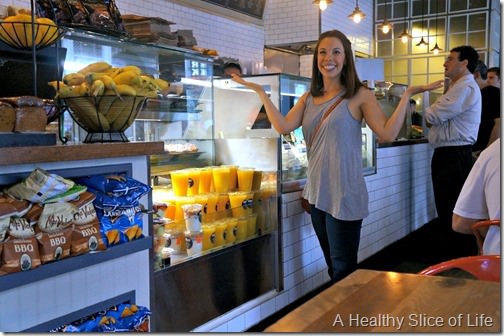 An authentic NYC bagel was on my list and Pick-a-Bagel did not disappoint. 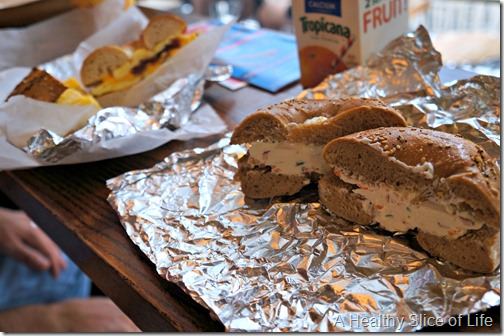 Once full STUFFED from breakfast, we ventured to Times Square to get tickets for the Gray Line Buses. We chose it based on a recommendation of how to see the most in the least time (tourists at our best!), and I’m really glad we did. We could hope on and off anywhere in Manhattan and I am a huge nerd when it comes to listening to historic facts that tour guides give. 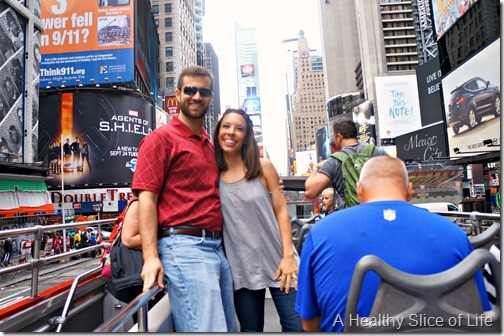 We took the downtown loop to start and I soaked up all the stories of the city’s beginnings and snapped pictures with the best of ‘em. 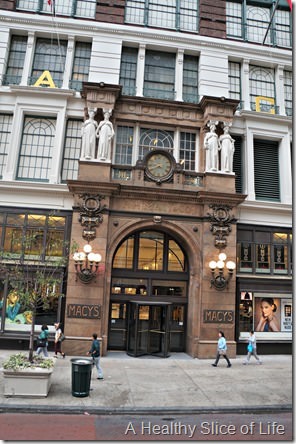 Did you know the Macy’s red star comes from a tattoo that Mr. Macy got as a teenager when he worked on a Nantucket whaling ship? SQUEEE! History tidbits.

We hopped off  the bus in the financial district because high on my must-visit list was the 9/11 monument. We waited in a long line and went through airport-esque security which I was not expecting, but it was completely worth it. 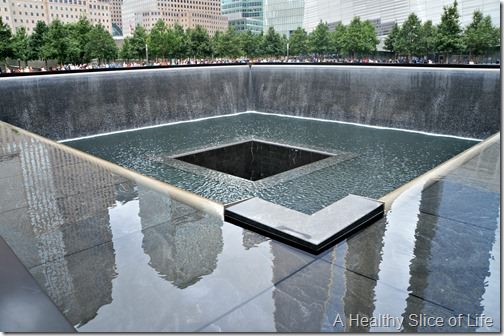 The reflecting pools are incredible. I felt the entire area was very well done and is a beautiful place to remember the tragic terrorist attacks and the innocent people that lost their lives. It really is breathtaking.

We walked a little ways through Battery Park before hoping back on the bus and resuming picture taking.

Hello, I’m pretty sure this is where Carrie went trapezing (?) on Sex and the City! How could I not snap a pic?

We hopped back off the buses at Rockefeller Center. What a cool area! It’s loaded with people (but isn’t all of NYC?), but I had fun searching for Tina Fey and imagining the ice-skating rink that calls the Rock home at Christmas time. 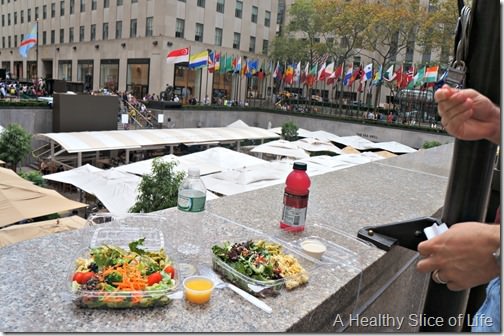 We grabbed some salads then searched for Rockefeller’s I Believe plaque. Check! 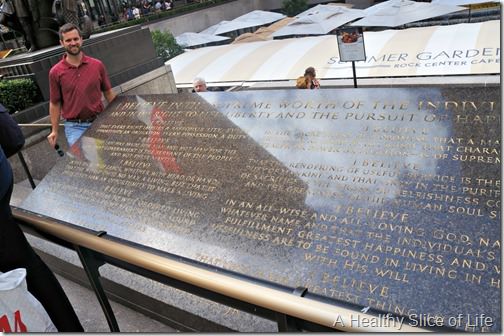 From there we wandered up to 5th Avenue, the high-end shopping street. We bought nothing but some pajamas for Hailey at FAO Schwarz after Zoltar directed us to do so. 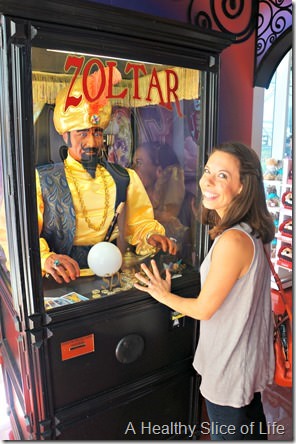 I admired the dedication (or complete bonkers-ness –it’s a word) of the people standing in this horrific line that also wrapped around the building waiting to…wait for it… buy a new iPhone. Insanity. Especially because most of them were playing on their old iPhones while waiting. 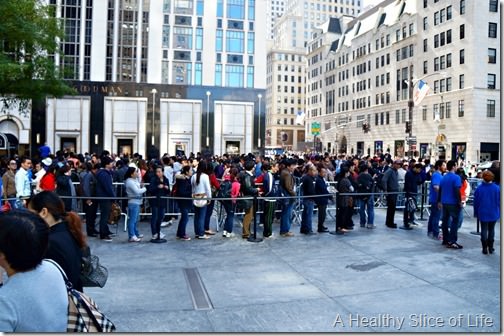 We walked up to Central Park, watched some street performers, then decided to rest our feet at the JW Marriott, snack on some wings and catch up on the football scores. 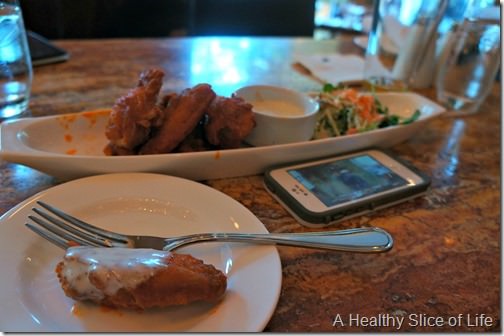 We wandered a bit more before heading back to The Hudson to clean up. We grabbed a drink and admired the view from their 15th story terrace bar before heading out. 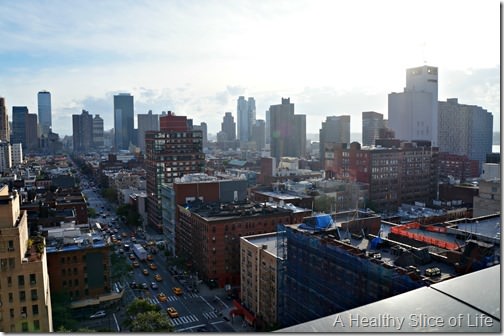 We were looking for a little spot to grab an appetizer and man-oh-man did we luck out! 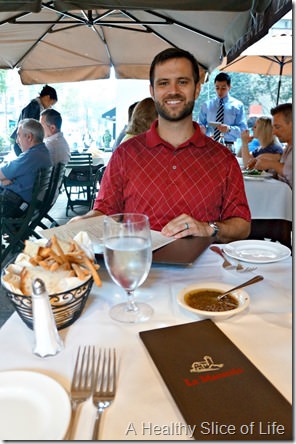 We found an authentic little Italian spot called La Masseria and it. Was. Phenomenal. The waiters were friendly Italians, the outside atmosphere was sublime and the food? Incredibly fresh.

I let David take the lead and he ordered something I never would have- the grilled octopus and cuttlefish with broccoli rabe over a fava bean puree. 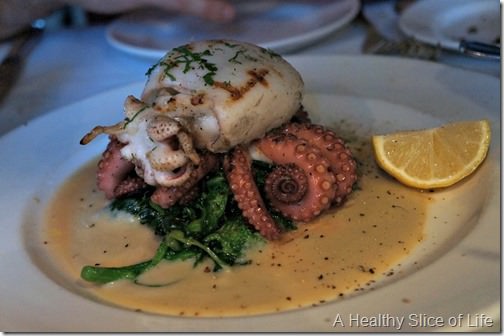 You guys, don’t be frightened. It was INCREDIBLE. We enthusiastically licked our plate clean. I wish we would have stayed for more, but the plan was to hop around. However, if you like real Italian food, ambiance and a dining experience, I highly recommend La Masseria.

We switched gears to a little place called the West End Grill. 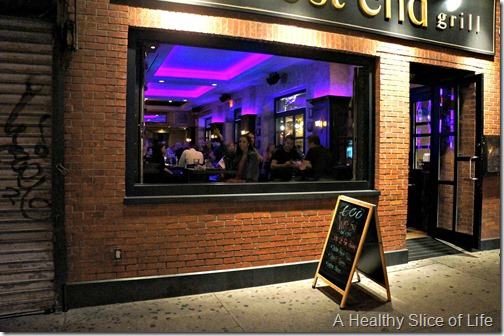 It was more of a burger and beer place, which suited us fine. We ended up staying there until it was time to head to the show. Another show?? Yes. Someone help me. I’m addicted.

Jersey Boys didn’t have seats together at the half-priced ticket line, so we opted for Chicago. 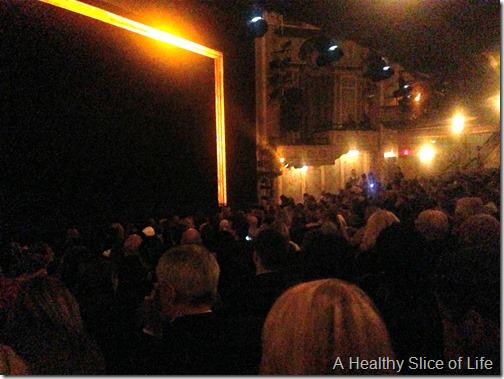 It was quite the different experience from Wicked. The show was solid, but it didn’t have the dimension that Wicked had and felt somewhat flat. Nonetheless, it was still entertaining and we enjoyed Roxie’s character!

After a full day and the rain that appeared after the show, we just grabbed froyo on the way back to the hotel. We people watched for a bit and called it a night. After all, we had more to do tomorrow!

What’s the best one you’ve ever seen?

Wicked was phenomenal and I also loved seeing The Sound of Music with my dad at the FOX Theater. Cirque du Soleil shows are pretty awesome too!