Good morning y’all! Can I first say how awesome all your comments were yesterday? You guys cracked me up asking about the ginormous dog bed, and it wasn’t until I read your comments that I realized how funny that must look!

The “dog bed” is really an amazing creation called The Love Sac (it’s actually their Super Sac). It may be the most comfortable thing in the world. Hubs bought “the sac” a couple years ago at Costco and up until 3 months ago, it was our only piece on furniture! It hasn’t reached it’s final resting place yet (the bonus/”man” room), and since it matches our couches, we’ve left it in the living room for now, until we buy “statement” chairs to fill the void. Bug isn’t allowed on the furniture, but she is allowed on the sac, so I guess it has become her’s.

I’m so used to seeing it, I forgot how [email protected] it must look to everyone else 🙂

Hubs and I also enjoyed an impromptu at home date night last night… starting with family budget discussions (what? That’s not how you spend date night?!) Thus the wine… 😉 We’re an oddly perfect pair, I guess, because we love discussing budgeting, goals and how to reach them. The great conversations ended with a sunset swim in the lake.

But that was all yesterday… today I’m back to my loquacious self (my dad described me using that big, fancy word years ago, and I still like it :)).

This morning I was up early to head to Charlotte for clients. Obviously I wasn’t up early enough because breakfast ended up being on the road: 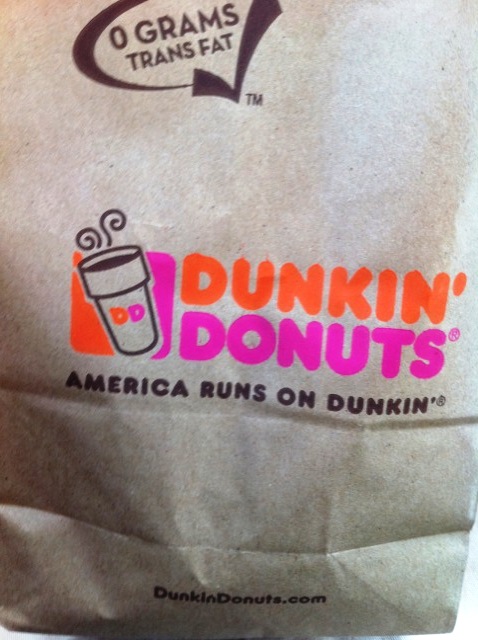 Nothing like some egg whites to get you going, right? Except I really wasn’t feeling cold egg whites this morning (last time I got the flat bread from Dunkin, it was ice cold in the middle- EW!)… so I took the savory route… 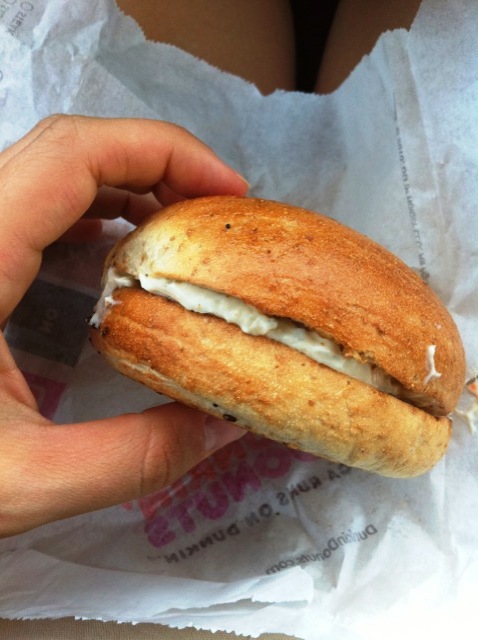 Wheat bagel with light veggie cream cheese- deeeeelish! And they’ve gotten a lot better about not piling on a ton of cream cheese (darn it… ;)) 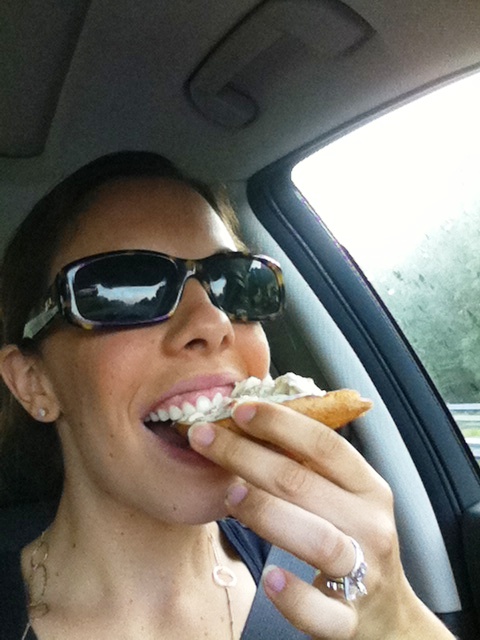 Now I’m taking a mid-morning break at the local Panera, where they have free wi-fi. I love free wifi. Although I remember when I worked a 9-5, I would grab lunch here and think “Who are these people that are using Panera like it’s an office?!” Now, that’s me… haha. And just to make you coffee drinkers from yesterday nervous… 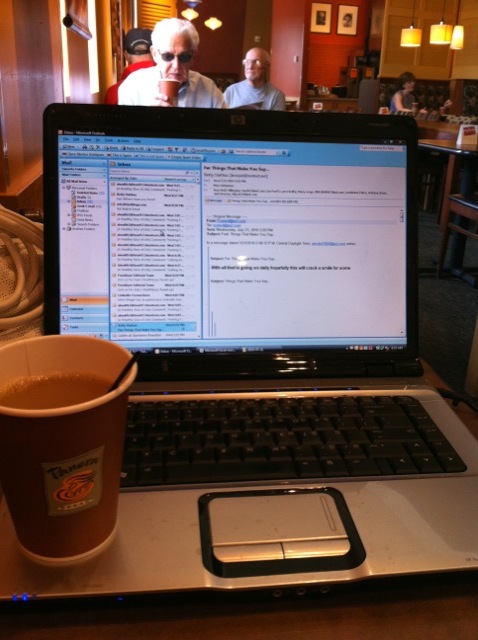 And to answer one last question, yup, I live on the lake. And am quite obsessed with water of any kind… creeks, rivers, oceans, lakes… I feel most peaceful when surrounded by water.

Are you a nature lover? Beach or Mountains?

I don’t know if I could choose, but if I had to, I’d choose Mountains… with a lake. Like where we got married… 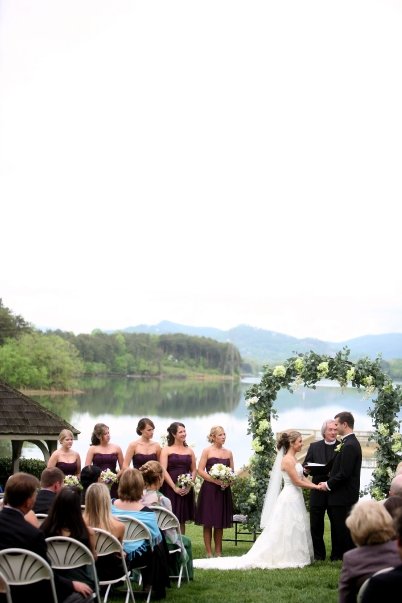 I was so hungry by the time I got home, I almost forgot to take a pic of my sandwich (turkey onion spinach mustard on a thin) with carrots and hummus… 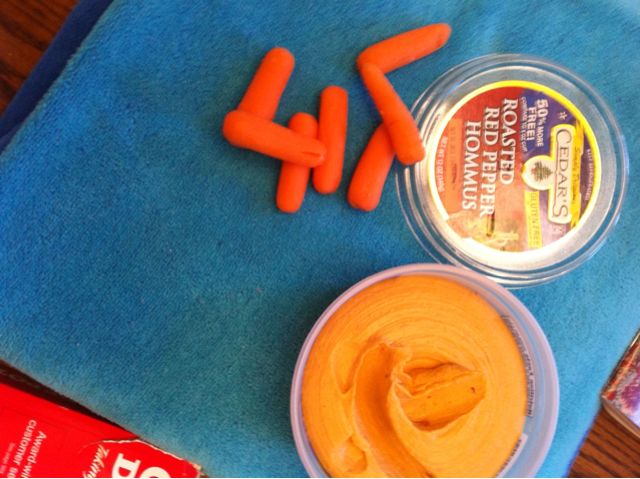 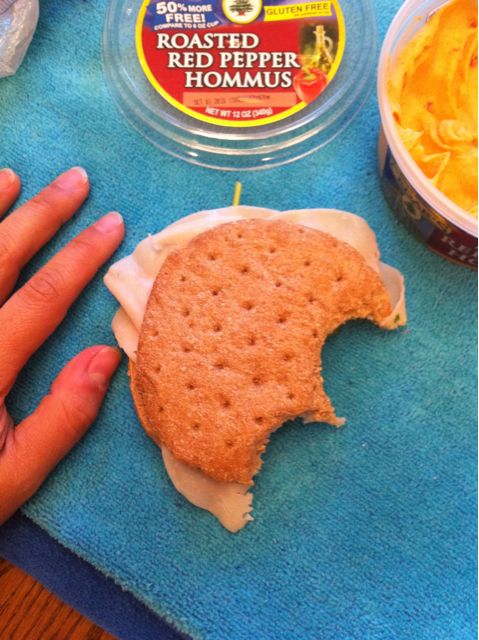 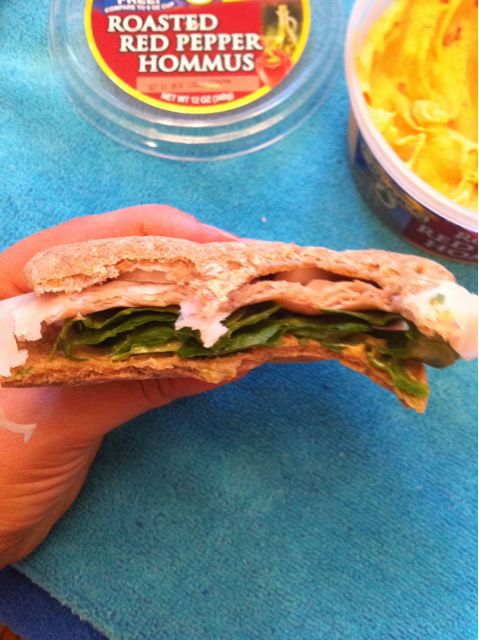 Koda was being a bum, and used the chair to cradle her head so she didn’t have to exert any energy… 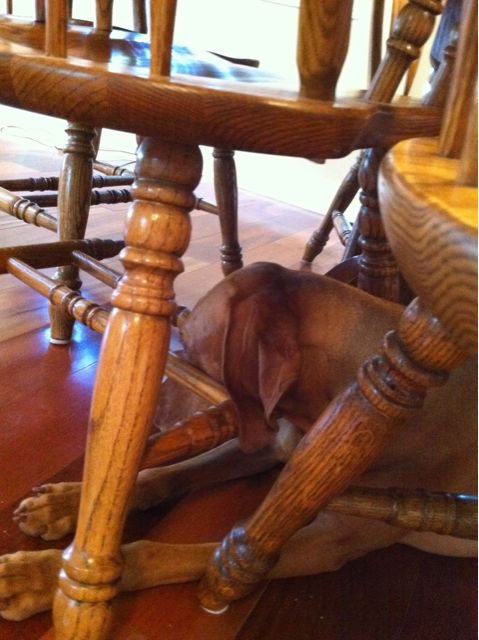 Nothing much to report… How dull, right? Off to do some work (and plan out what to do tomorrow night with my girls in the ATL!!!) 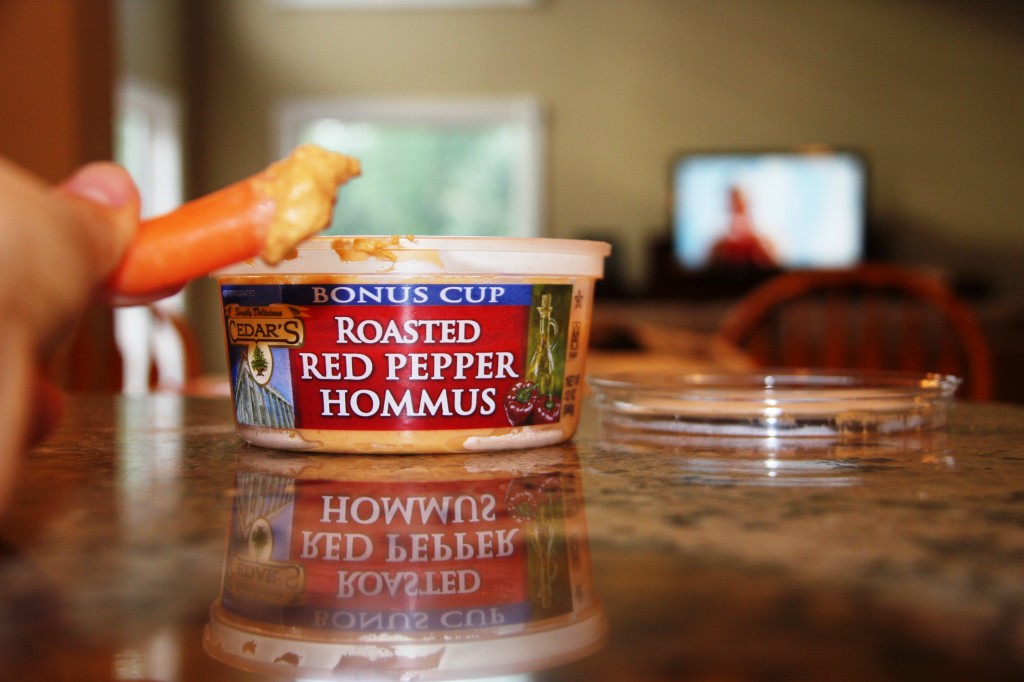 And the movie playing in the background? That’s Momma Mia. 🙂 Quite possibly one of my favorite movies.  Sometimes I wish I lived in a musical… being able to burst out into a spontaneous choreographed dance and song to express my emotions would be AWESOME.  Of course, it leads to lots of strange-one-eyebrow-lifted looks from Hubbs when I dance around singing in the kitchen while I am making dinner…

Speaking of making dinner, we officially declared it clean out the fridge and pantry night, which led to an odd combo of food.

First, I made a lemon lime seltzer mocktail 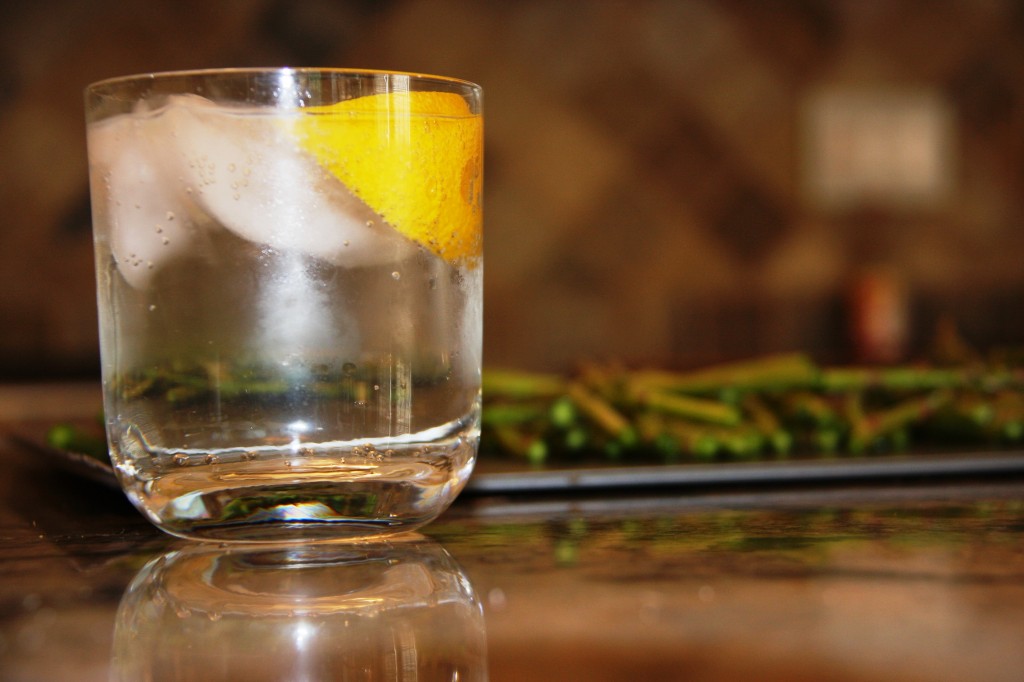 I ended up having 2 mocktails… crazy night, huh? 😉

Then I roasted some asparagus, which I munched on while I danced around singing Honey Honey and working on the rest of dinner. 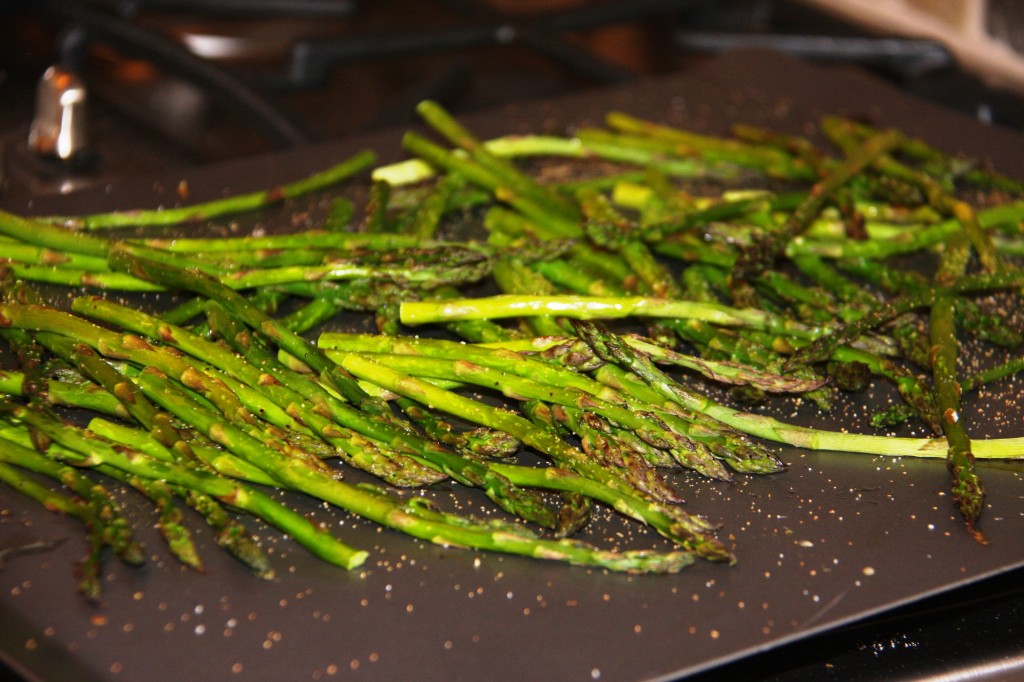 I was meatless, so I needed to figure out a hearty enough meal to fill up Hubs… I decided on brown rice as a base, then I stirred in kidney beans, a can of Rotel, a few dollops of Pace salsa, some chopped onions and spices… 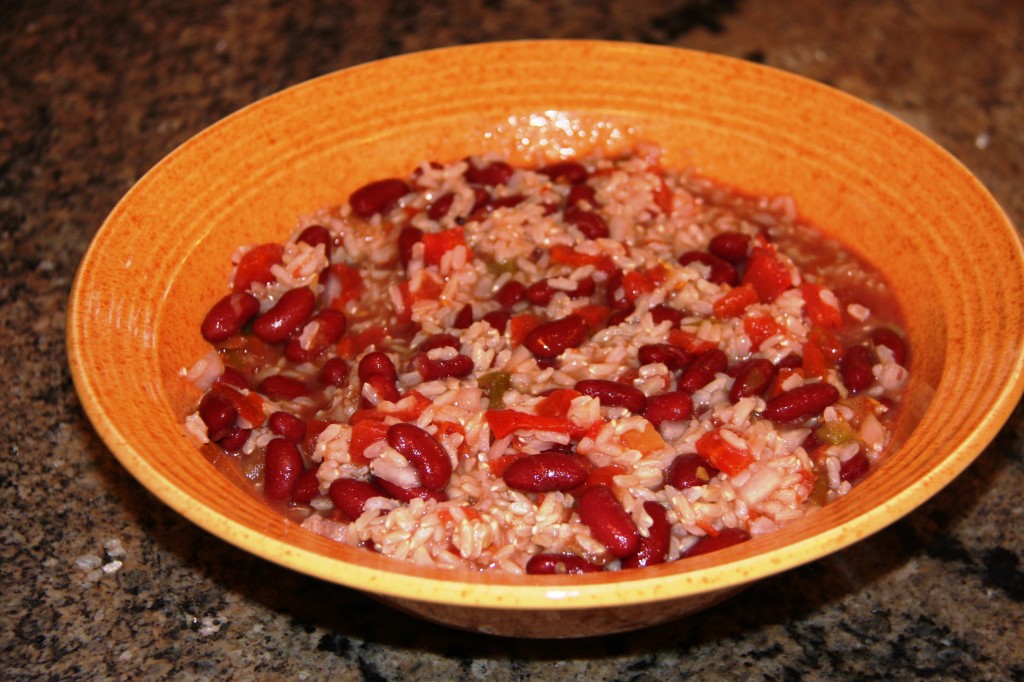 I decided we should eat it with tortilla chips, but after about 5, I switched to a spoon. Real classy dinner… asparagus and a makeshift dip, right out of the bowl! 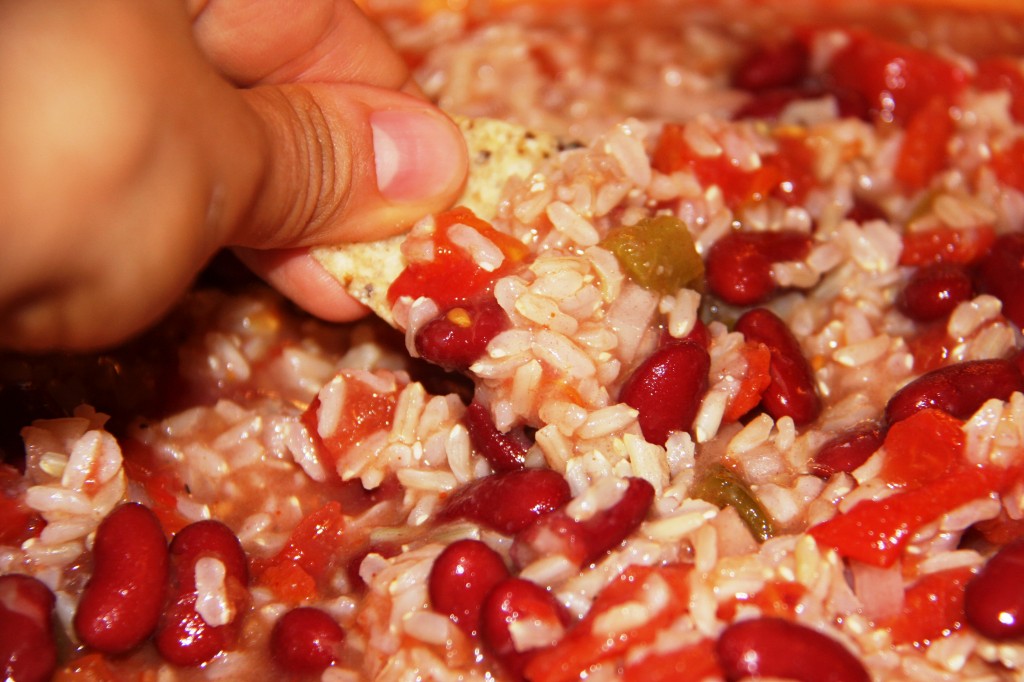 Despite the weirdness factor, it wasn’t a bad dinner!

Now off to relax a bit… thanks so much for your sweet comments about the wedding pic… that day massive storms came through the Blue Ridge Mountains, and it cleared up only 30 minutes before the ceremony… we didn’t have a back up plan for rain… let’s just say it was stressful… but totally the best day of my life!