It feels like just yesterday I was talking all about baby-led weaning, but somehow I blinked and Hailey is 4 years old. Though 4 still seems feels so young, in other ways I’m embracing that she is becoming more of a little girl and less of a toddler. With that comes more privileges, but also added responsibilities, on both our parts.

On my side it means honing in on household rules and manners. One area I’ve focused on lately is mealtime so I thought I’d give you a peek into our dinnertime scene. 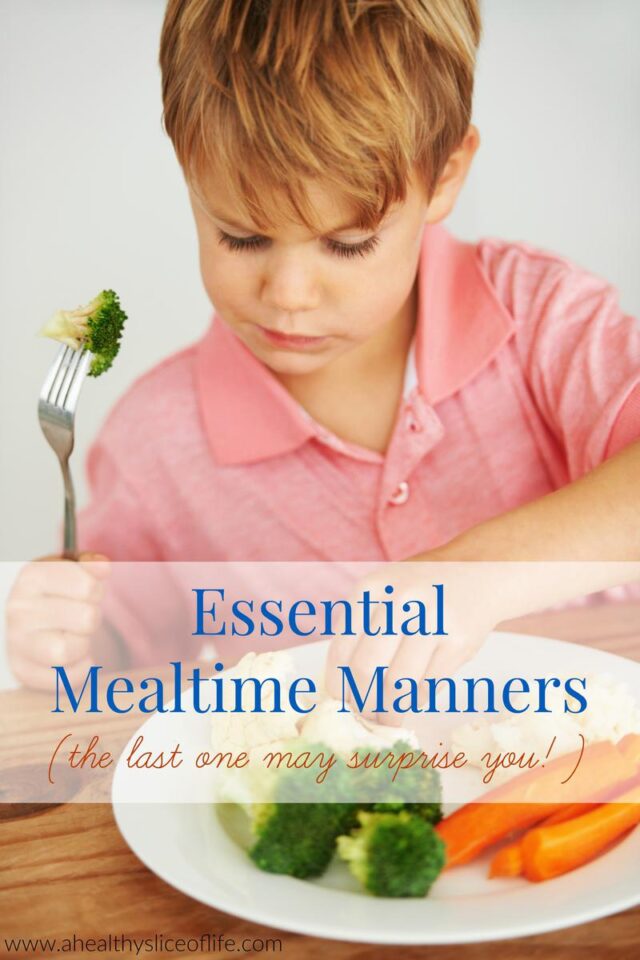 Chew with your mouth closed. Let’s be honest, is anything more unappetizing than eating across from someone grinding away at their meal with their mouth wide open? Maybe, but not much comes to mind. I started this rule early on and Hailey is pretty aware of it by now. Occasionally I’ll have to remind her by quietly pointing to my mouth while making eye contact with her, but usually she’s good at this one. In fact she is so hyper-aware of it that she has pointed out others to me that are chewing with their mouth open in public. It happened once at a restaurant and I about died of embarrassment when the patron next to us heard her state “mom, look! Chewing with mouth open!” Looks like I need to work on what is appropriate to say out loud and what isn’t next.

Ask for things politely. I overheard my friend Alison once saying to her daughter “we don’t start sentences with the words I want.” BOOM. I loved it and adopted the same rule from that moment on. We apply it to all scenarios, including dinner. Out of water? No problem, but instead of screaming I need/want more water or I’m thirsty, Hailey must ask for it correctly. May I please have some more water?

Stay seated at the table. Sigh. I’ll admit it guys, we’re terrible at this one. I probably have myself to blame, as I am always getting up to help Kaitlyn, filling requests for water/another napkin, cleaning up (guilty), etc, but Hailey truly does not make it through a meal sitting down. She’ll eat several bites, then hop up to come give me a hug. She goes to grab another bite then stands up and twirls around the table. I often write it off as an age-thing, but it’s probably something I should focus more on. Any tips?

Do not play with your food. I know I often talk about wanting the girls to explore their food, but there are some parameters on that. While we cook, yes, touch, smell and taste! When your 12 months old? Yes, use your hands! But at 4 years old and eating at the table, you are expected to use utensils to eat and not flick food around the table.

Ask to be excused. For as much as Hailey bounces between seated and standing during meals, she is aware that she has to have permission that the meal is over. Most often the last question asked is “Is your tummy full?” and if the answer is yes then we are working on her following up with “May I please be excused?” We certainly don’t have this one conquered yet, but it’s a work in progress and a rule I think is just good manners.

Help clear the table. After any meal or snack, Hailey is responsible for clearing her own plate. She throws yogurt containers and napkins in the trash, then brings her plate over to the counter next to the sink. I’ve been working on extending this to clearing the rest of the table too. She has to be reminded usually, but at this age she actually loves setting the table and clearing it if I ask her to.

No saying Yuck or Ew. This rule. This rule honestly is the most important to me. Maybe it’s a personal pet peeve, but I find it so rude when someone comments ewww or gross on a food that another person is eating. Perhaps it is because I eat some rather unique foods and have heard ew disgusting too many times myself, but it’s like nails on a chalkboard to me.

Hailey just recently picked this little gem of a habit up (I’m guessing from preschool?) and I was quick to shut it down. I explained to her that saying yucky, ew or gross is disrespectful. To explain it on her preschooler level I told her it could hurt the person’s feelings that worked hard to prepare that food and just because something is different than what she is accustomed to doesn’t make it gross. I’ve explained to her that she can keep quiet if it’s something somebody else is eating, or if it is offered to her, she can simply say no thank you.

What dinnertime rules did you grow up with?

What dinnertimes rules do you feel are important to teach kids?