This post is brought to you by a Healthy Slice of Life sponsor.

I have a theory. My theory is that kids and vegetables are not natural born enemies. Maybe I’ve met one too many friends that swear their kids love broccoli to be convinced that by kids are destined to despise all things green. So why is it such a widespread belief?

I know they get blamed for everything, an easy scapegoat if you will. But think about it- haven’t you seen plenty of old school TV shows or commercials that show children turning their noses up at whatever is on the dinner plate, only to be shown seconds later lit up like Christmas trees as their parents hand them XYZ product? I get that it’s a fun concept to poke fun at, but I’ve been told my favorite vegetable growing up was the artichoke, I see Hailey and Kaitlyn gobble down cherry tomatoes and have plenty of friends share with me that their children will flat out devour some carrot sticks.

So I have this plan to call a truce. Let’s stop propagating this Kids Hate Vegetables myth. I don’t expect my girls to suddenly jump for joy at every vegetable the encounter (after all, the homely beet is having a heck of a time trying to win me over), but I truly believe we can reverse this long-standing feud. I mean, if being nerdy is now cool, then can’t loving veggies follow? I think so.

Ok then, great theory, but how? How does one go about calling a veggie truce? I have a few ideas…

1. Get your kids involved. Have you seen some vegetables in their natural state? Some look downright freaky (I’m looking at you, root vegetables). When presented with an option between a freshly-pulled parsnip and a perfectly squared cracker box with Jake the Pirate slapped on the front, who do you think the kids will opt for? Exactly. 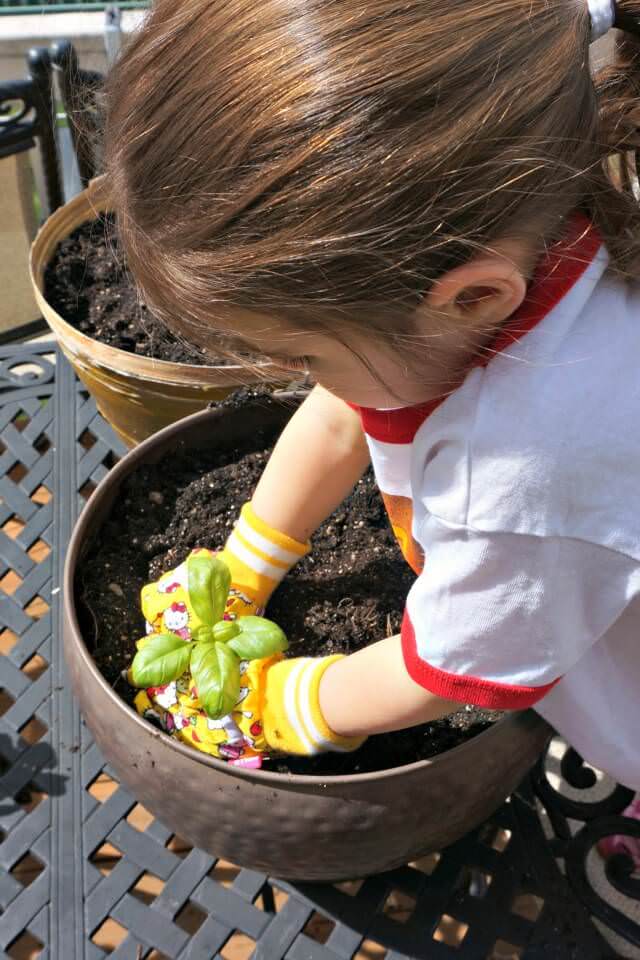 So take your kids to the grocery store, or better yet, the farmers market. Let them get comfortable with how vegetables look. Let them pick out any vegetable they want. Thanks to the internets, you can quickly google how to prepare even the craziest looking candidates. Get them in the kitchen and let them learn how to peel it. Let them smell it, touch it. Heck, take them out back and let them get their hands dirty while they learn that you can GROW food.

I’ve found that it doesn’t really matter what you grow- shoot, start with mint- that weed, ahem plant, will grow anywhere. But showing them they can grow something then eat it will rock their world. 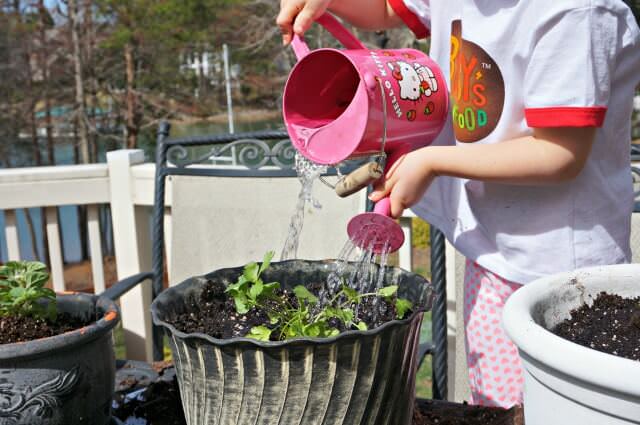 2. Make vegetables taste good. Sure, some vegetables might taste just fine flying solo (cherry tomatoes, carrot sticks, cucumber… ok, no cucumber for my kids, though I still don’t quite understand why), but others can use a little doctoring up.

Let them taste test salad dressings for dipping, toss them in oil and sprinkle them with salt to roast, throw them on the grill, saute them with a little butter, pack them into a smoothie or juice. I want to eat a piece of boiled cauliflower about as much as I want to endure trying to get an overtired preschooler to clean up her toys, so make is tasty! 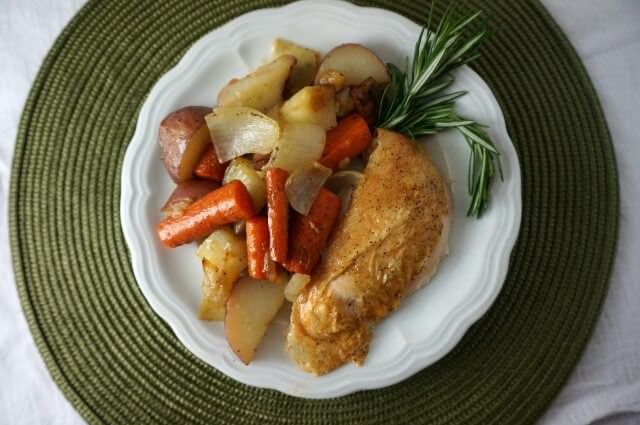 3. Don’t force them. The best way to kill any idea with kids? Make it mandatory. If I’ve learned anything while parenting over the past 3.5 years, it’s that power struggles always result in a lose/lose situation. Options are the way to go. Let them choose which vegetable will go with dinner. Let them choose how to prepare them. Now, I’m not saying they get to completely run the show, but letting Hailey take some ownership in decisions has worked really well for us. Hailey, would you rather have broccoli or zucchini (always broccoli). Do you want to squeeze the lemon on it or should I (always her). 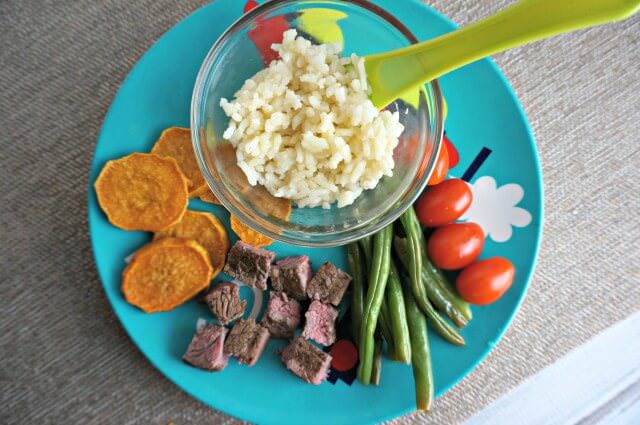 4. Stop hiding vegetables and celebrate them instead. Before you throw that rotten tomato my way, let me elaborate. Sneaking things essentially tells us that there is something to hide. When I sneaked out of the house while growing up, I was hiding it (though my parents tell me I wasn’t hiding it well). When we sneak vegetables into food, we are usually trying to hide them, solidifying the idea that they need to be masked. I’m not saying to stop putting spinach in smoothies or beans into brownies (if that’s your thing), but why hide it? Celebrate it- Isn’t spinach delicious in this (strawberry-banana-almost-milkshake-like) smoothie?!

I firmly believe in not hiding vegetables, which was why I was so excited when I discovered Bitsy’s Brain Food. 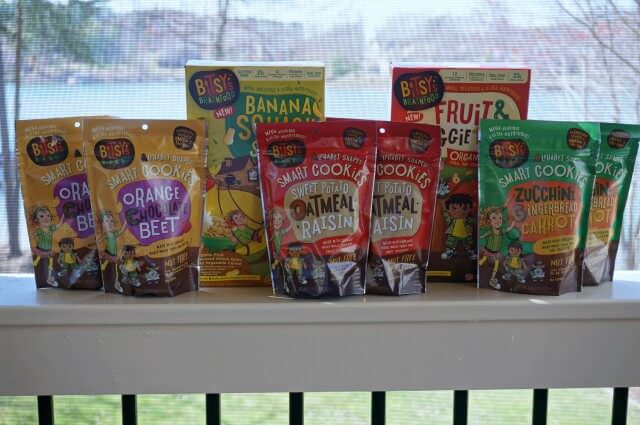 Bitsy’s Brainfood was started by two moms that believe that learning to eat healthy should be fun. We share the idea that vegetables shouldn’t be hidden because we want kids to embrace vegetables, knowing that yes they are good for them, but more importantly that they taste good too! 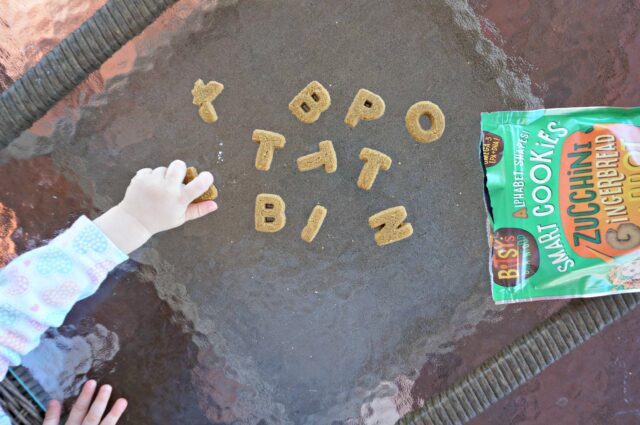 Their cereals and cookies are baked with organic fruits and vegetables, are non-GMO and their Smart Cookies even have Omega 3 DHA + EPA. Nice.

What I love about this brand is that they are all about helping kids to embrace vegetables; it’s even right on the label- ZUCCHINI Gingerbread Carrot cookies. This was the perfect product to test on Hailey, being that zucchini is usually on her ‘no eat’ list. 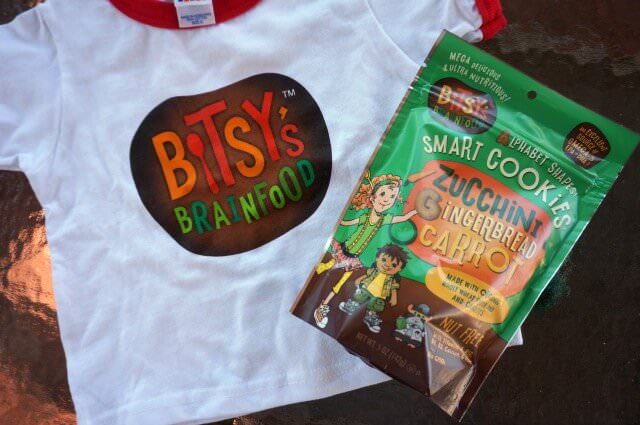 She grabbed the package and asked what they were. I told her. They’re zucchini and carrot gingerbreads! She was a little hesitant, but the letter shapes drew her in, then it was love at first bite. Now she’s all like, they’re my favorite! 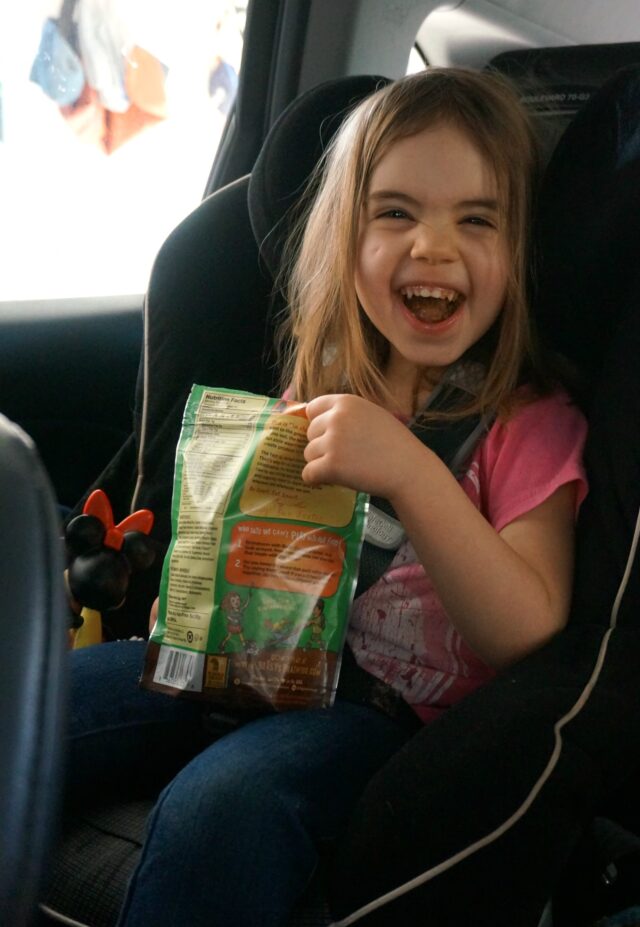