Another baby update already? Yes, friends, another month has flown by and though I sometimes feel these posts only thrill the grandparents and my own desire for record keeping, I continue to write them. Now hold on to your hats, I’m feeling chatty. 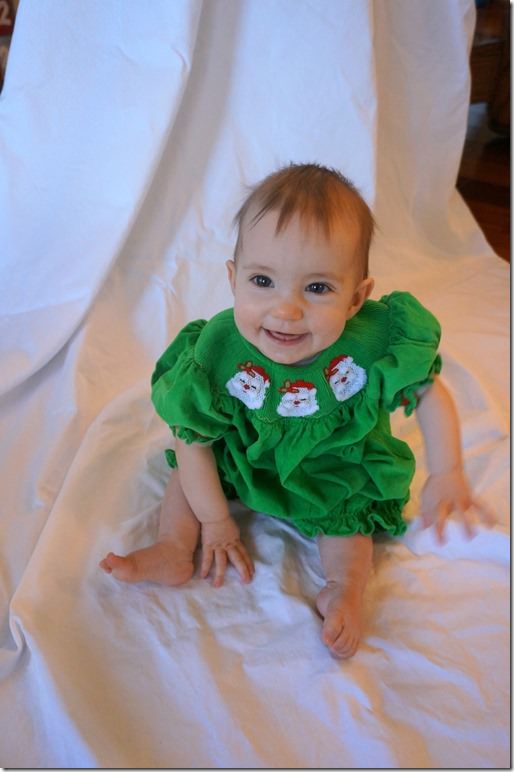 No official photo shoot this month because we are flying by the seat of our pants over here trying to enjoy the holiday season and figure out this ‘throw schedule to the wind’ phase that Kaitlyn seems to be going through.

This past month Kaitlyn has really started embracing baby led weaning. She can grab pieces and bring them right to her mouth, which makes eating out more enjoyable because she is distracted. 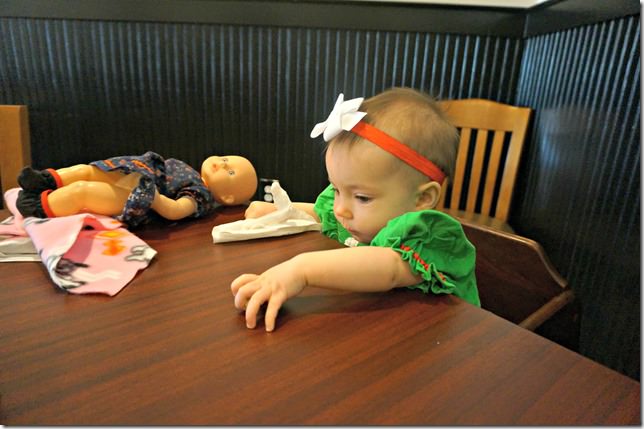 At home she eats solid anywhere from 1-3 times a day, depending on the day. 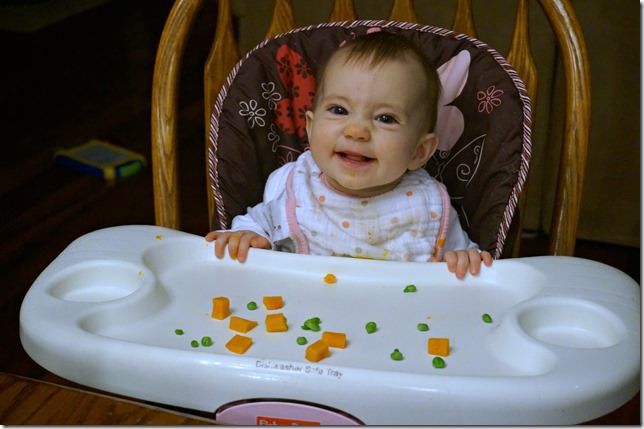 So far sweet potatoes appear to be a favorite, but I don’t think she really has strong taste preferences at this point.

I’d say she nurses 5 times a day (6:15, 9:30, 12:30, 3:15 and 6:15ish), but honestly, right now she must be hitting a growth spurt, getting teeth or something because yesterday she nursed a ton. I was a bottomless pit of hunger and thirst and it felt like the newborn days again. Whatever you need baby girl!

She took a bottle well when I was out of town a couple weekends ago and I’m reminding myself I need to keep up the occasional bottle so we can keep that as an option. 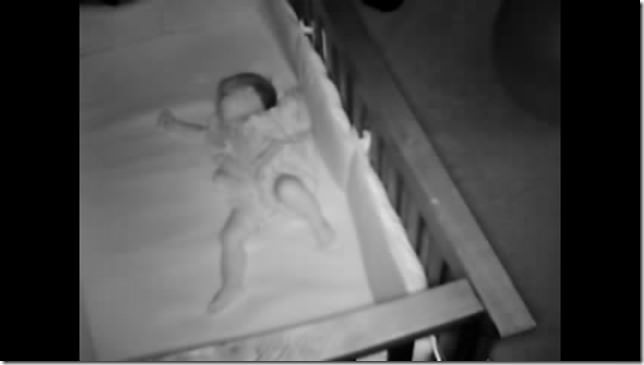 I can’t blame her for lack of schedule- that’s all on me. At seven months old, Hailey had a nice orderly little routine. Isn’t that cute? What first-borns get? Kaitlyn is always on the go. Lucky for me, she adjusts well, clocking in cat naps in the car. I know if we are going to leave the house that we need to be pulling out of the driveway by 8:45/9 and she will immediately doze off. 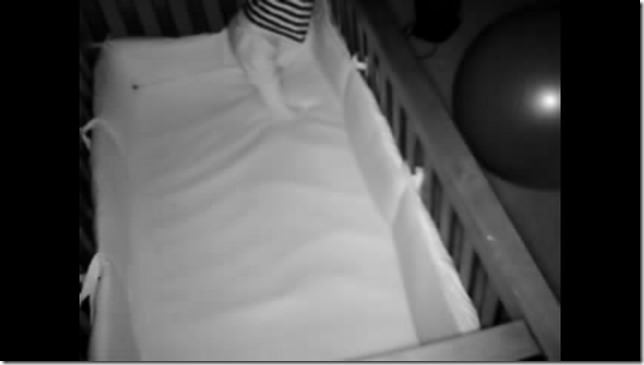 And have I mentioned how much she loves standing in her crib? It’s about time to lower the mattress. Sniffle. 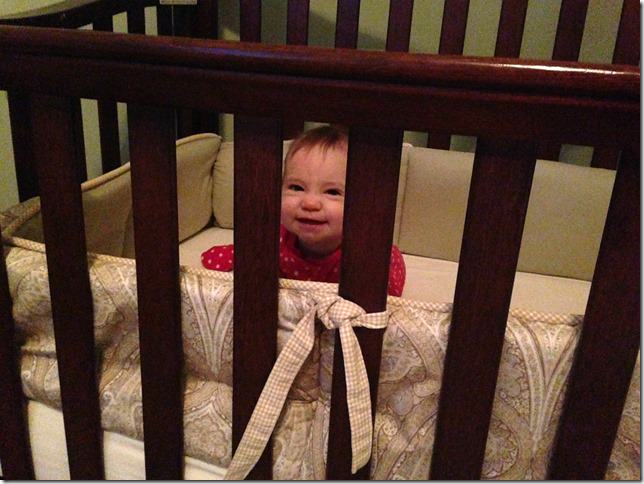 Oh that face, I just love it. Kaitlyn is a happy girl. Truly, the child is so cheerful unless she’s flat out exhausted.

She crawls everywhere on all fours, but her new favorite is pulling up to standing, then attempting to let go with one hand and turn around. She pulls up on toys, baskets,legs and chairs, which has led to some decent falls. She’s a bruiser. 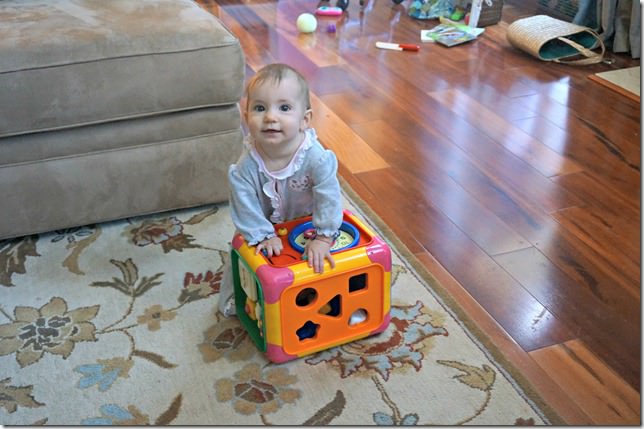 In the last few days I’ve noticed a real uptick in her babbling. I guess I would call it that? She gurgles and whispers, but I haven’t heard any distinct ‘dadadada’ or ‘babababa’ sounds. I keep trying to lure her to start with ‘mamamama’ but she isn’t quite there yet. 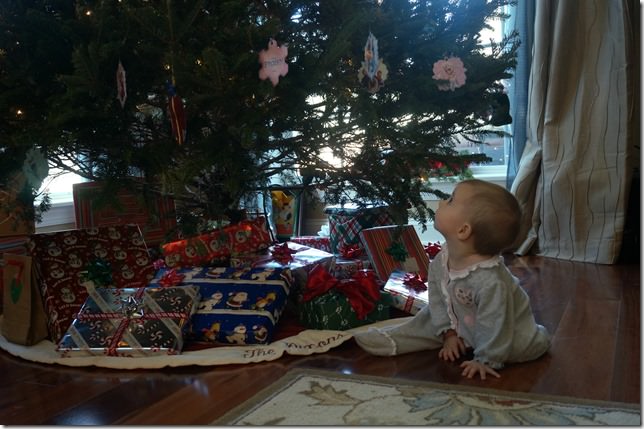 Let’s see, what else?

She wears mostly 6 month clothing or 6-9 month. She wears size 2 diaper. She’s a little thing, though I won’t know her official height and weight until her next appointment.

Dislikes: being stuck in one place and not able to move (the carseat), getting overtired, being left behind (if people leave the room she will crawl furiously after them crying… sweet thing), sleeping according to a predictable schedule, getting her fingernails cut

Loves: clawing me in the face and pulling my hair while nursing, standing up, ‘flying’, tickles on her back, try to claw the freckles off my chest, open mouth slobbery kisses on my face then bursting into giggles, making a squenchy face, the Ergo (YAY FINALLY!), and her sister 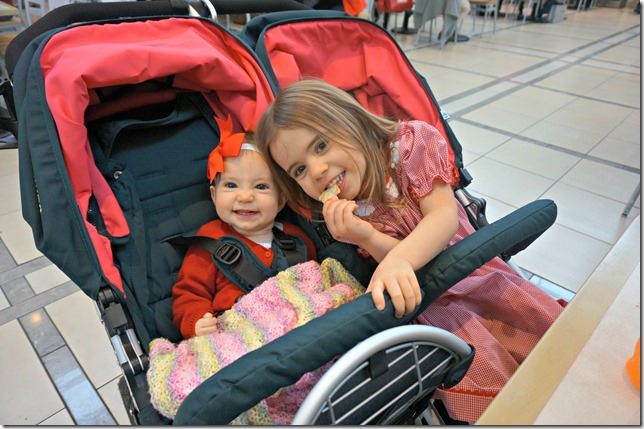 For fun: Hailey at seven months old part one and part two – plus other baby-related posts.