I receive emails every so often with Hailey questions, so after a few repeats, I find myself wanting to post about it. I love talking about what Hailey is up to because it helps me remember. If I didn’t write down everything that happens, I wouldn’t remember a thing and I’m only 7 months in! I also like posting about Hailey because I know I like to hear what is going on with other babies. Basically, I write this to share, NOT because I think I am an expert, because I’m not. I have experience… as much as any other mom out there with a 7 month old. So here are some answers from my point of view… 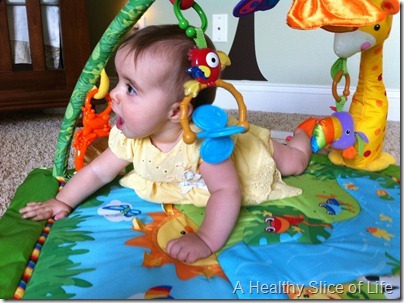 When and how did you establish a schedule with Hailey?

Hailey’s routine has evolved every couple months. In the beginning I wasn’t concerned with scheduling. I wanted her to eat when hungry and try to go to bed at night when we did so I could maximize my sleep. After she was a few weeks old, I tried to follow the eat, play, sleep routine that Baby Wise recommends. This didn’t exactly work for us, because it didn’t follow Hailey’s natural pattern and I ended up feeding her more often, and I felt like I was encouraging snacking over meals, so I came up with my own eat, play, sleep, play, repeat pattern. This worked for us. I never allowed Hailey to fall asleep while nursing. Her naps directly after eating were always short and didn’t allow her to get quality sleep, so if she started nodding of, I’d pull her away and play with her to keep her awake. Once she played for a while, I’d put her down for a nap. We even keep this pattern today and she eats once she wakes up, not before, because when she eats before she doesn’t nap as well. 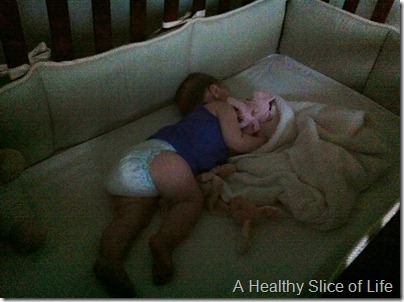 Since she was born, I’ve always written down the time she ate and how long she nursed for. After a few weeks I started recording her nap times and even wet and dirty diapers. I wanted to see if any pattern appeared. Slowly, it did. As soon as I noticed Hailey’s sleep signals (rubbing eyes and yawning), I’d get right on putting her down for a nap because waiting too long would result in a missed window of opportunity and an overtired baby. By writing down the times that these things occurred, I began to see a pattern of when she needed to nap and was able to put her down before she got overtired.

I really think that Hailey put herself on a schedule and I just paid close attention to her signals. It’s morphed over time as she dropped from 3 naps down to 2 and now from 5 nursings during the day to 4. 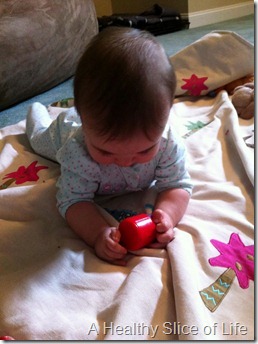 I have a 5 month old and I’m interested in hearing about when Hailey hit her milestones like rolling over, sitting up unassisted, etc.

Thank goodness I wrote stuff down because I’d never remember! Hailey was able to lift her head for short periods from her first week. Her first real smiles were around 4 weeks old and wow, they were amazing when I realized she was actually smiling at us. She rolled over just before 3 months. She rolled from back to front and front to back, but was incredibly inconsistent. One day she’d do it, and the next she’d lay there and scream. She started sitting up on her own just before 6 months old. She’s just now starting to overcome her hatred of tummy time and now pushes up on her arms, but is not up on all fours. She rolls and wiggles and can move in circles, but no crawling. She first ate solids right after her 6 month birthday. She started babbling a lot right after around her 7 month birthday (before that it was mostly coos and giggles), while babbling was more distinct sounds, like her new favorite, dada dada dada.

I think that’s most of the big milestones… did I miss anything? 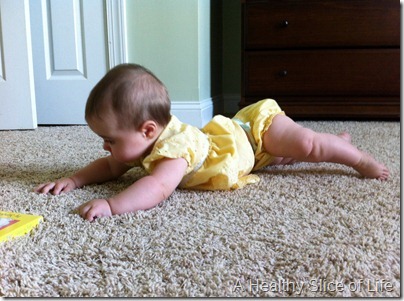 Did you rely on any books or other resources to work through developmental stages, growth spurts, tough times, etc?

I always thought I’d read a million parenting books, but I ended up not really reading much. I loved Ina May’s Guide to Childbirth, The Womanly Art of Breastfeeding and The Bradley Method. I read most of Happiest Baby of the Block and Baby Led Weaning and some of Baby Wise. I really think the 5 s’s of The Happiest Baby on the Block helped us out and I learned a lot about the stages of labor through The Bradley Method, but in all my 7.5 months of experience, I really learned to rely on myself… and twitter. Hahah. Seriously, though, I must have had some mommy instinct kick in because I feel like I trusted myself to learn what worked best for Hailey, since every baby is different. I still asked my mom, friends and my twitter friends plenty of questions, and found the support helpful on sleepless nights caused by growth spurts (shout out to the #zombiemoms!), but I try not to compare developmental stages because every baby grows at his/her own pace and if I get caught up in who is crawling or talking early, I’d drive myself crazy. 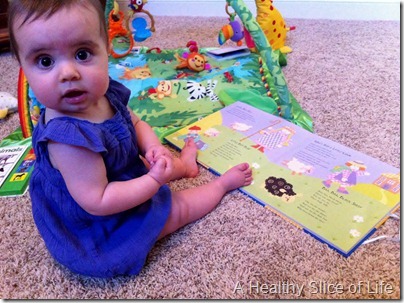 How many times she having milk now that she’s eating table foods, sleep schedule, etc.

7:15 wake up and nurse. 9 minutes on one side, 5 on the other. Change diaper, get dressed. Play in jumperoo while mom blogs and makes breakfast.

10:35 nurse 5 minutes on each side. Diaper change. PLAY by going on a walk or playing with her kitchen in the playroom. Read books with me. I’m very interactive during this time and talking to her constantly.

12:15 More play, sometimes solo, or running errands out of the house.

4:45 Meal time! Into the high chair for the second meal of the day. I watch her and prep dinner.

6:45 Bath time. Splish splash and have some fun. Get dried off, clean diaper and put into jammies.

7:00 I kiss her good night and David takes her to her room, rocks and reads her a book and puts her to bed. 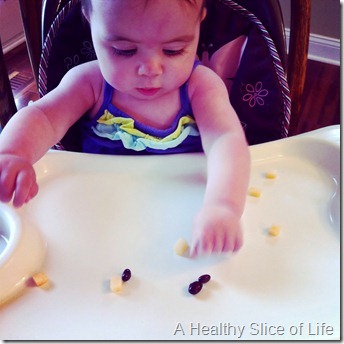 I think I’ve been wordy enough for today, but if you have any questions, keep sending them my way! …or leave them in the comments