haven’t worked out hard in one solid week.

Last Thursday I pounded out over 4 miles on the dreadmill for the Couch to 10k program, then skipped home knowing that that was my final workout for the week (unless you count dancing on a booth). 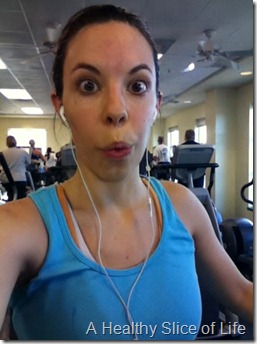 I’m saying ‘whew’ in the picture, but clearly it just looks like I’m channeling my inner gold fish. Lesson learned.

I always know that when Monday comes, it’s time to jump back on the the workout wagon, but after a lazy Sunday, Monday was spent getting life back in order and groceries in the fridge.

Tuesday I still felt tired (clearly I can’t party every night like I once was able to…), but took K-dizzle on a 4 mile bike ride. For those that follow me on social media, you know my vet officially declared her fat, so we’re working on it. It’s not her fault. She wants to be adventurous, but since the baby came, we haven’t gotten her out as much… and soothed our guilt by giving her extra peanut butter #parentingfail 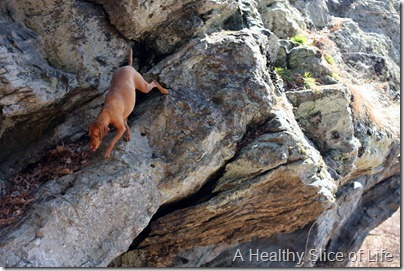 Wednesday, determined to get to them gym, I got on the treadmill and did about half of what I was supposed to before turning it off and heading home.

Yesterday? I felt great, but with the 60 degree weather, I opted for a stroll to a playground with Koda and Hailey. Maybe topping out at just over a mile. 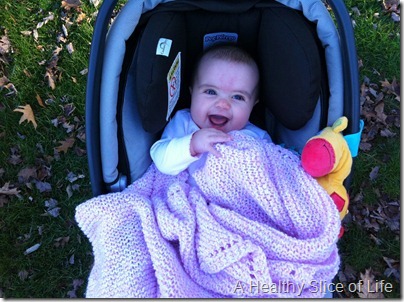 The funny thing is that this would have driven me crazy, once upon a time! Have I admitted before that I’m a recovering ‘all or nothing’ type of person? Well, if I haven’t, let me assure you that I am.

One bite of a ‘naughty’ food or one day off my exercise plan would throw me into a tailspin of ‘well now I’ve screwed it up so I might as well…” you fill in the blank. Mine was usually filled with something like “eat an entire Papa Johns pizza and sit on the couch all day”.

But this week, instead of driving me crazy with guilt, I’ve acknowledged that I listened to my body, which was tired, darn it.

I soaked up the sunshine and enjoyed outside time without stressing about whether or not I’d still be able to make it to the gym.

And today? I’m feeling reenergized and my legs are itching to run. Ok, that’s a lie, I wish I had that kind of itch! But they are feeling well-rested and ready to rock.

So today I will be patting myself on the back as I head to the gym, knowing that a week of taking it easy isn’t the end of the world.

And that’s saying a lot for this recovering all or nothing-er.

Are you an all or nothing person?