14 months old and getting more fun everyday.  I finally made the decision to enjoy each stage as it comes, instead of reminiscing about the days flying by. I tend to get nostalgic easily and want to make sure I focus on the thrill of the journey of parenthood so I don’t miss a moment. I snap a lot of photos so I can properly cry my eyes out with nostalgia and she goes off to to college, but for now, I savor the moments and each new stage. 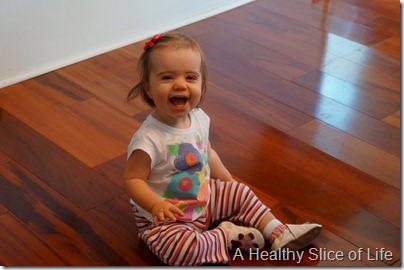 And let me tell you, 14 months is a pretty awesome stage. I skipped the 13 month update because I didn’t think I’d post monthly updates anymore, yet here I am, not wanting to forget the joy that is 14 months, so please indulge me 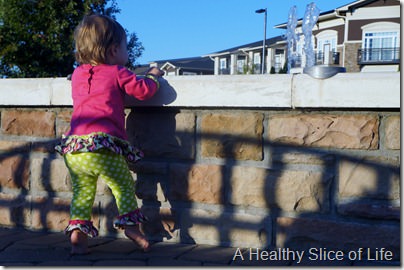 At 14 months, Hailey loves exploring the world. She would be outside all day if it was up to her. 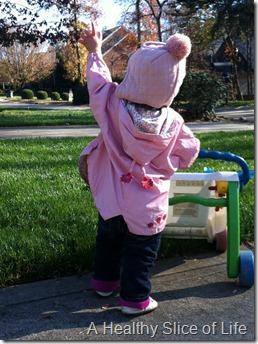 She points and laughs and the neighbor’s dogs, crumbles fall leaves in her hands, and handles her walker like a pro. It’s funny she loves it so much because she can now walk on her own! 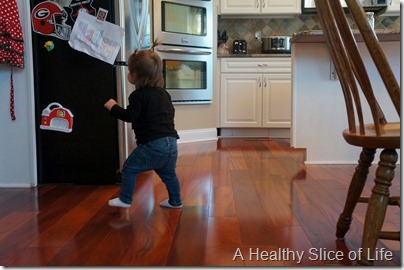 She started at 13 months taking steps. She’d take 3-4 in a row, fall down and try again. I guess some people call that walking, but I wasn’t convinced. When I finally got to 15-17 consecutive steps, I declared her a walker. I LOVE watching her toddle. I still squeal when I see her pigtails bouncing up and down on the other side of the island. 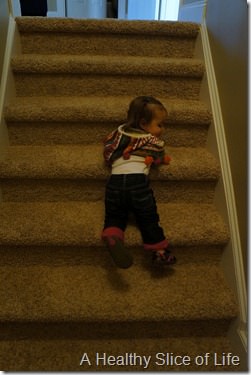 Hailey is also a stair master. At 13 months she started handling them like a pro. As she approaches, she turns around and slides down backwards. As with everything she does, I think it’s adorable. 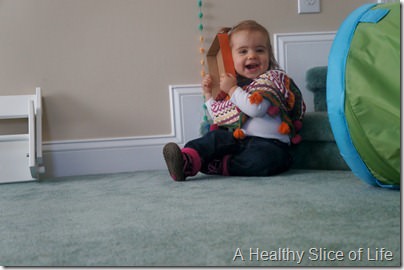 Her favorite activities include peek-a-boo/hide-n-seek, dancing to toddler radio and Christmas songs, giving high fives, grabbing Koda’s tail, climbing into chairs, going down the slide and putting things in her bucket, spilling it, clapping and filling it back up again. 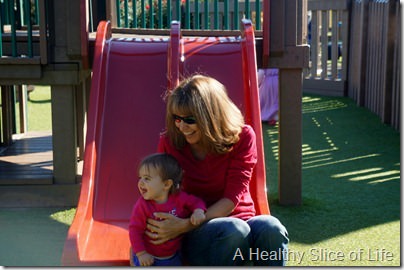 She’s a sweet girl. Periodically she’ll stop playing, walk over and lay her head on my leg. She gives the best hugs and snuggles. We’re working on kisses. 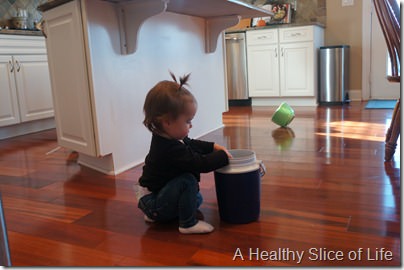 This isn’t to say she isn’t without her challenges. Besides pulling everything out of cabinets and drawers, she also sometimes bites when she is tired and it hurts! She also thinks of most diaper changes as torture and occasionally throws a tantrum when I take things away from her. Oh, the drama. 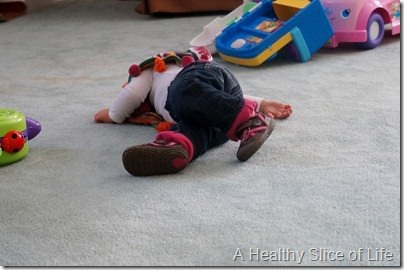 She is sleeping from 7:00pm-7:30am and I usually go get her around 8:00am. She always smiles, stands up and hands me both pacifiers. Yes, she still needs one for each hand for bedtime and I think it’s adorable. She is napping once a day, usually going down between 10:30 and 11:00 and sleeping 2-3 hours. 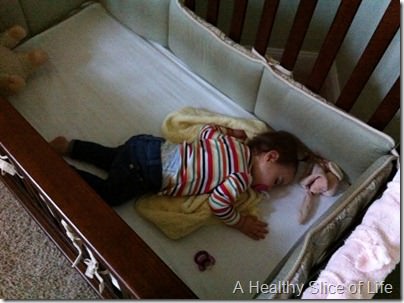 Let’s talk words. I really struggle with what to count as words. Is it saying them? Or using them consistently in context? Hailey says hi (hiiiii), dada, banana (na-na-na) and dog (dah) in context, meaning I know she, without doubt, knows what they mean. In fact, I can’t say the word banana without her freaking out and wanting one. She wakes up every morning saying banana and pointing to the counter until I give her one. She says mmm when she is eating something she likes and says moooo when I ask her what a cow says.

She also has said mama and ball, but doesn’t say them consistently with meaning. Seriously? I’m with you EVERYDAY and I can’t get a decent mama? Sigh…

I’ve also found that she is mimicking our inflection. She repeats things back in babble, but with the same inflection in her voice. It’s neat. 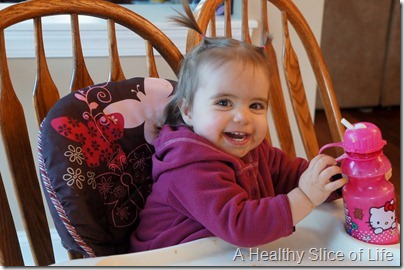 She’s still eating well. 3 meals and 1 snack a day. Her favorite foods right now are banana, sweet potato, pomegranate arils, Greek yogurt and salmon. She’s not as wild about her old favorite black beans unless they have some flavor added in. She drinks about 8 ounces of her milk a day. No banana milk necessary. Whoop! 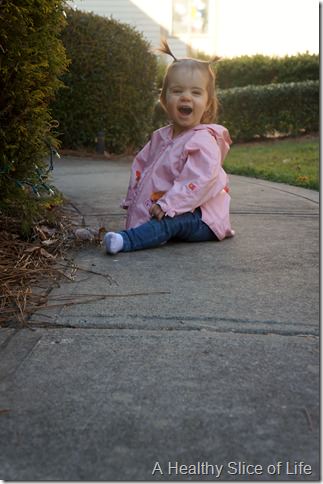 As if I haven’t already been wordy enough… here’s a rundown of the basics.

Clothing: 12-18 months or 18 months clothing, though some of the pants sag on her. She wears size 4.5 shoes and size 4 diapers.

Teeth: She has 8! Top 4 and bottom 4, though with the swollen gums, I wouldn’t be surprised if those molars popped through soon. 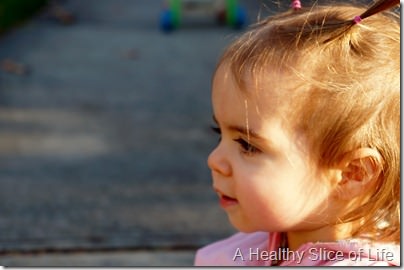 There can’t possibly be anything I left out, so thank you for indulging this update post. Sill deciding whether or not I’ll keep up the monthly updates or not…

Have a great day!