David’s birthday is next week and like most men, he is quite difficult to shop for. There isn’t a lot of things he wants, but what I can always count on being a hit is an experience. Back before we had kids we always did weekend getaways instead of gifts. Those weekends aren’t as easy to come by anymore, but with a lot of planning and Mema’s loving helping hands, I was able to whisk David away to Asheville for a fun-packed, 24-hour whirlwind.

Oh Asheville NC, I love you. I’ve heard it called the Boulder (CO) of the east, and though I see the similarities, I think it warrants its own reputation. It has an eclectic, artsy, farm-to-fork feel that the entire city embodies. Now where to start…

Asheville is about a 2 hour drive from us, so Saturday morning we kissed the girls, took off and were in the city by 11:00 am. Our first stop was at Green Sage, one of my favorite little coffeehouse cafes. Full of kombucha on tap and freshed-pressed juices, it was a tough call, but ultimately I ended up going with the Buttercup Coffee (a drip coffee blended with extra virgin coconut oil and grass-fed butter). 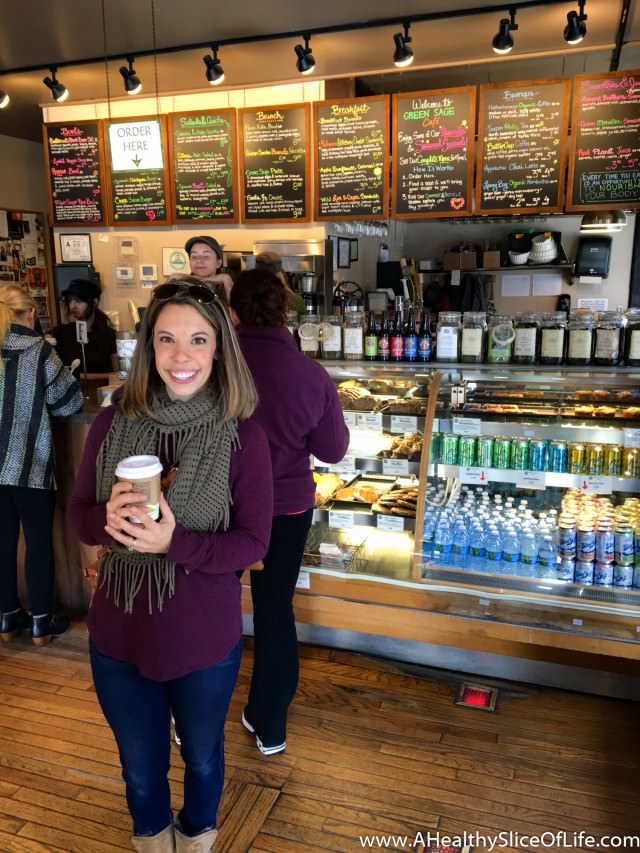 It was slightly creamy and coconutty and tasty in its own right, so I didn’t need to add a thing. Still, I couldn’t help but squeal in delight at the offerings for condiments. 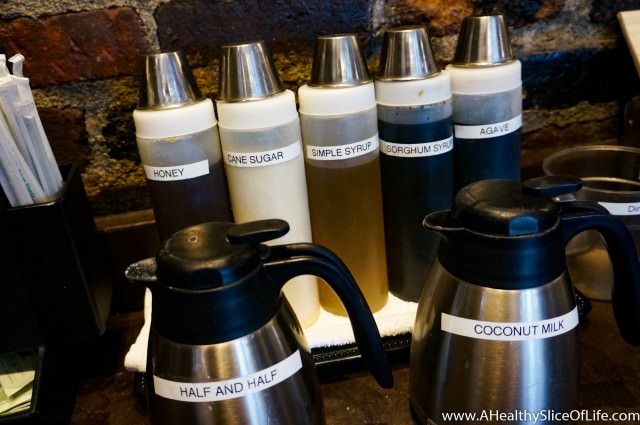 How many places are coconut milk and sorghum syrup available as add-ins?

We wandered the city, stopping by chocolate shops and admiring local art. 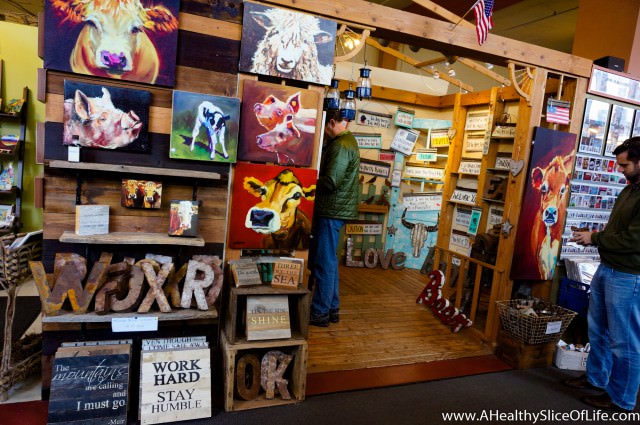 I wanted that cow painting on the right so badly and it was only $50! If I had any place to put it, it would have been mine. I also deeply considered the fancied-up set up for boxed wine. 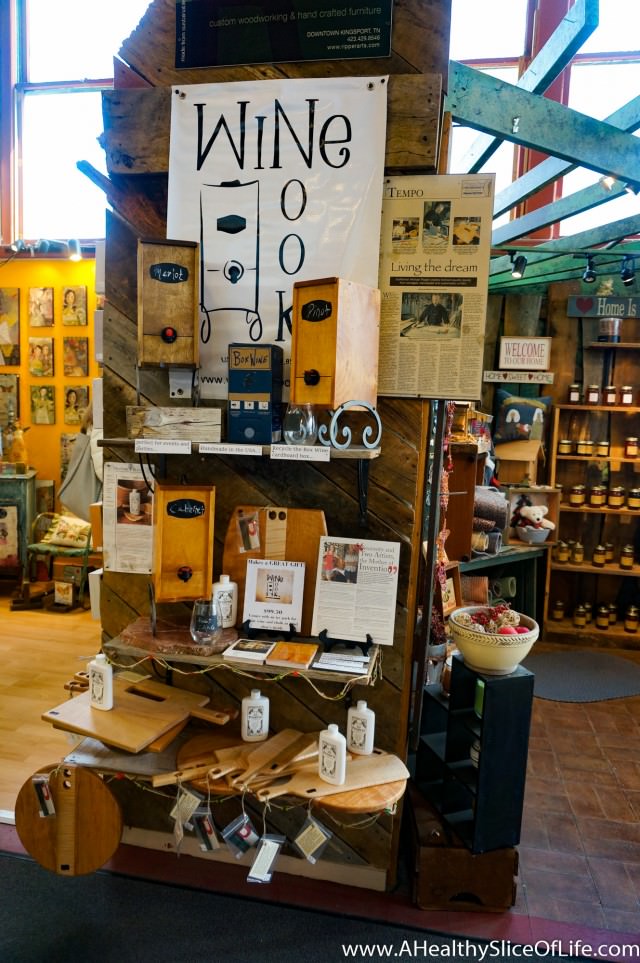 Eventually our stomachs started growling so we headed for Wicked Weed Brewery, which was slammed starting the moment it opened. It was my first time there and it didn’t take me long to agree with the general sentiment that it is a COOL spot. 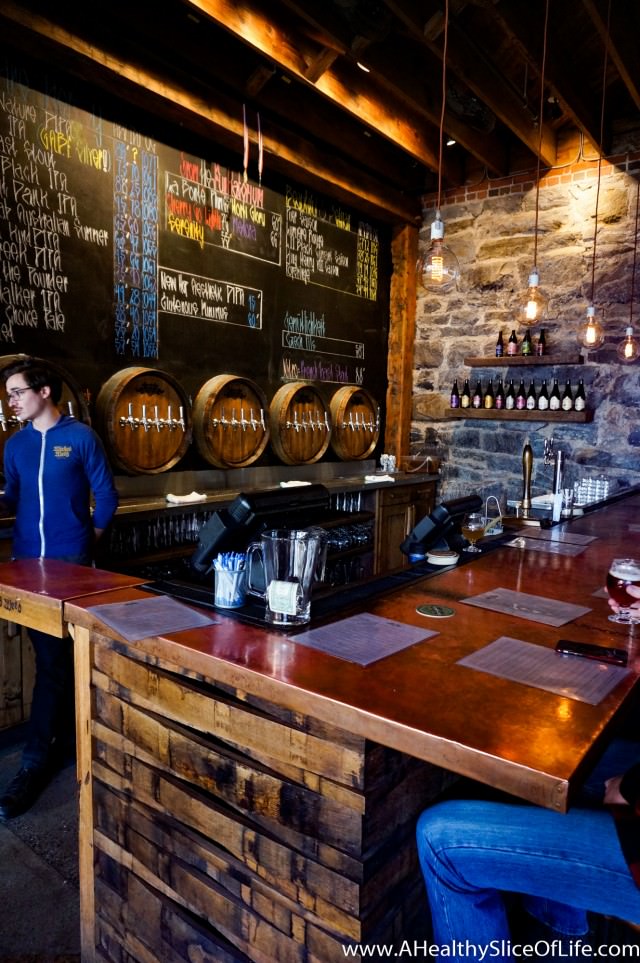 They offer a wide variety of their own beers, plus an impressive menu. We grabbed lunch and indulged in an ale and an IPA. 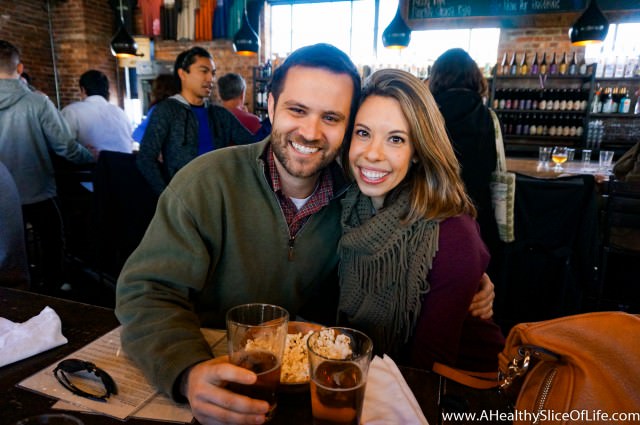 From there we wandered to another nearby brewery- Green Man Brewery before I started to get the itch to take off to our destination for the evening, the Historic Omni Grove Park Inn. 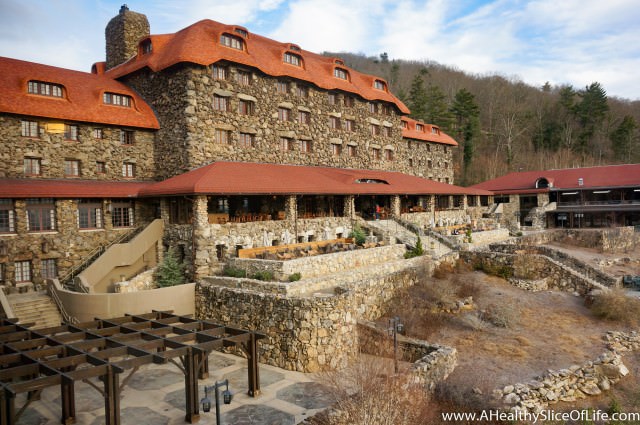 I wouldn’t be surprised if most of you already know of this incredibly beautiful hotel; it’s certainly has a shining reputation of Southern hospitality and rich heritage. I was honored that they offered me a complimentary night’s stay for our visit. David and I have stayed here before, back in December of 2009 when we were fully-fledged into weekend getaways instead of gifts. That time of year they have the most magnificent gingerbread houses on display!

Despite no gingerbread houses in January, David and I spent over an hour exploring and reading its history, which is beautifully displayed throughout the hotel. The list of guests that have stayed here reads like a page right out of a US history book. 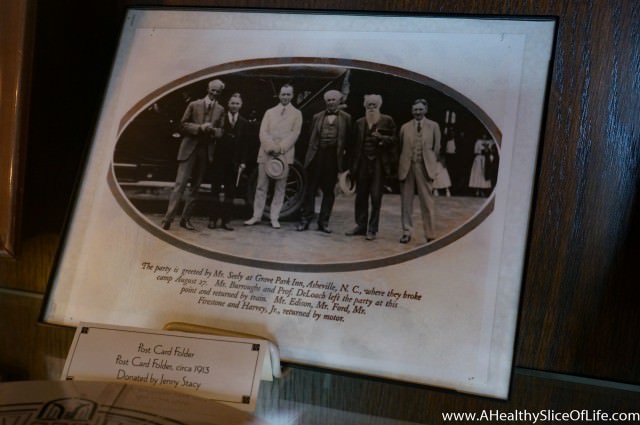 We spent time by the grand fireplaces in the lobby, which are literally bigger than I am, and took every window we passed as the opportunity to soak in the mountain view. I am most definitely a mountain girl. 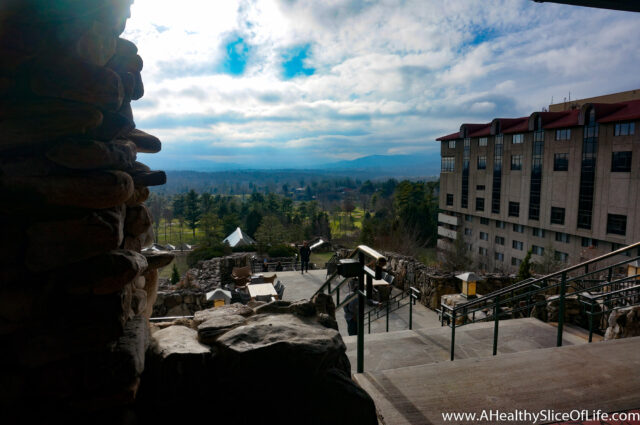 We kept the party going with signature drinks. The American Smash (Tito’s vodka muddles with lemons, basil, strawberries and sugar) for me and bourbon with ginger beer for the gentleman. 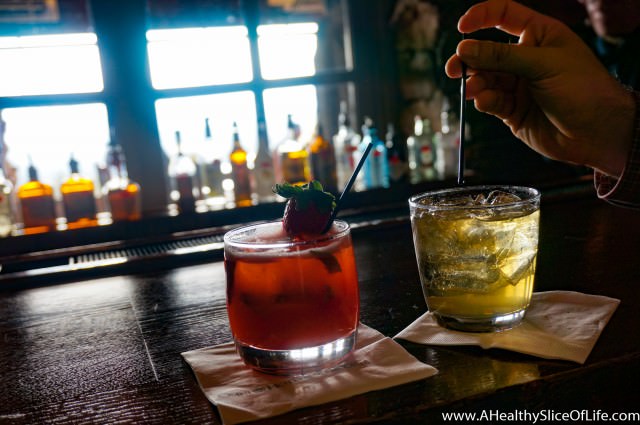 We made reservations at the Blue Ridge Buffet on property, then headed to the room to dress for the evening.

Another surprise for David was tickets to the Grove Park’s Big Band Weekend. We were told anything more than business casual would suffice, but the opportunity to dress up rarely presents itself, so we decided to go all out. 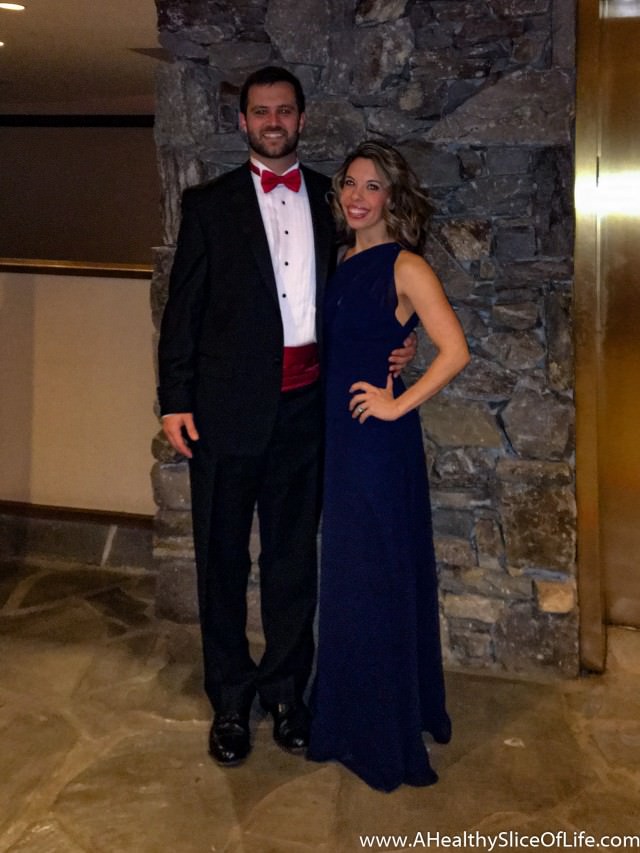 Does anyone else take on a different persona when dressed to the nines? Oh I just love it! We took off to dinner feeling quite elegant and I was grateful the dress was loose enough to allow me to fully enjoy the buffet. I left my nice camera behind, but ended up having to pull out the iphone to try and do the food justice because 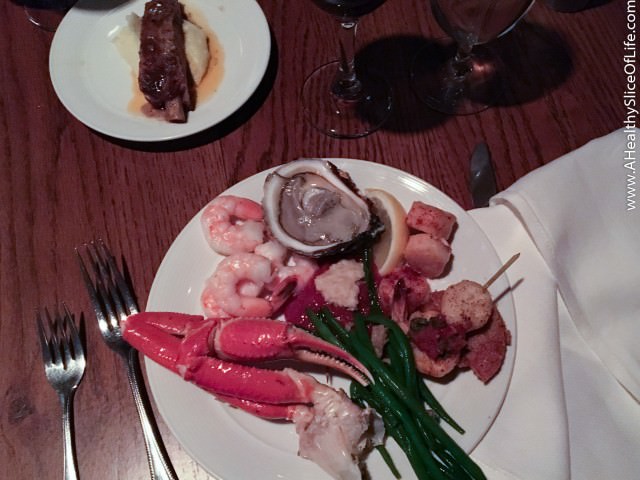 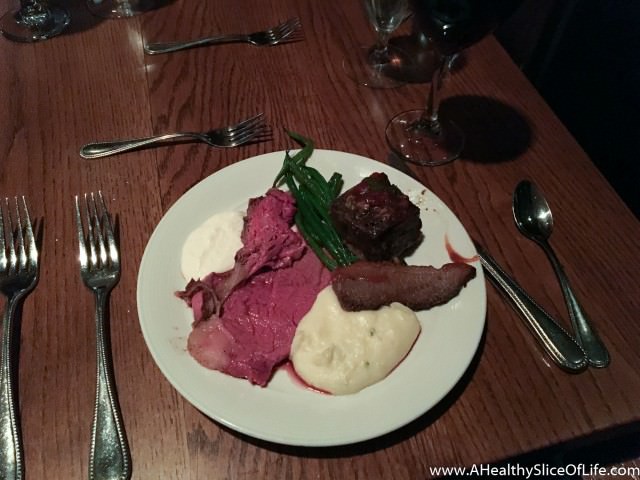 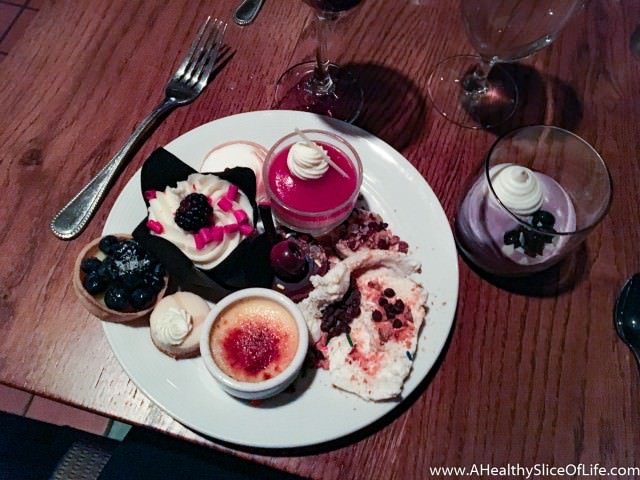 plates later we finally threw in the towel.

From there we were off to the grand ballroom, not quite knowing what to expect from the evening. We arrived to see a large brass band set up on stage and many ladies and gentlemen dressed in their best. The dance floor was hopping with everything from the foxtrot to the two step. The atmosphere was lively and we wasted no time heading to the dance floor.

We brought the average age down by at least 30 years, but we did our best to keep up with all the movers and shakers tearin’ it up. It was a BALL. My photos didn’t do it justice, but I did snag this clip. Don’t mind my cheesy wink!

We danced until close to 10:00 pm I’d guess before deciding we needed continue the evening at Elaine’s Dueling Piano Bar. You guys, somehow we channeled our inner 20 year old selves because we shut the place down. I can’t even tell you the last time we’ve had such a footloose and fancy-free evening!

The next morning we made one last stop downtown to grab breakfast at The Early Girl Eatery. This famous spot, like so many other Asheville restaurants, focuses heavily on locally sourced food. We split some pumpkin gingerbread before I face-planted into the Early Girl Benny, which is grit cakes topped with tomato, spinach, poached eggs, tomato gravy and avocado. I added ham too because… well why not?! 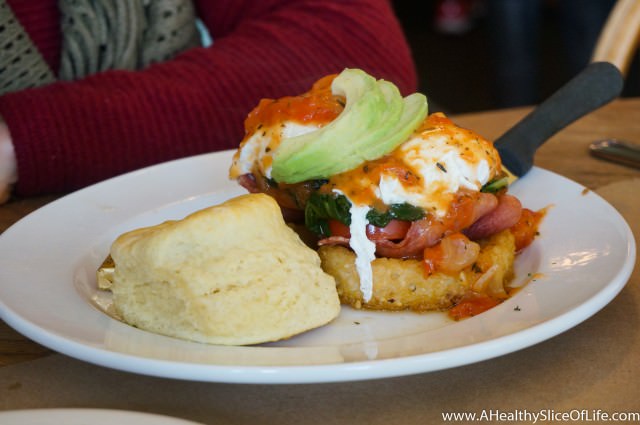 I think the picture speaks the deliciousness for itself.

We headed home after that to hug to girls and thank David’s mom for being a rock star Mema- the girls had so much fun! I’ll be completely honest, we were total bums yesterday afternoon and it felt so good.

Happy early birthday to my best friend and love of my life! And Thank you, Omni Grove Park Inn, for hosting us in your fabulous accommodations!

Have you ever been to Asheville?

What is your favorite spot?