I tried my best to post a few pics from the weekend as it was going on, but I only did a so-so job.  We had a great time, though! Who doesn’t have fun with a bunch of girls at the beach? Here’s a few highlights from the weekend…

The main table decor… full of Skittles (the bride’s favorite candy), mini tacos, the infamous cake (FUNfetti!), and couple others goodies too. 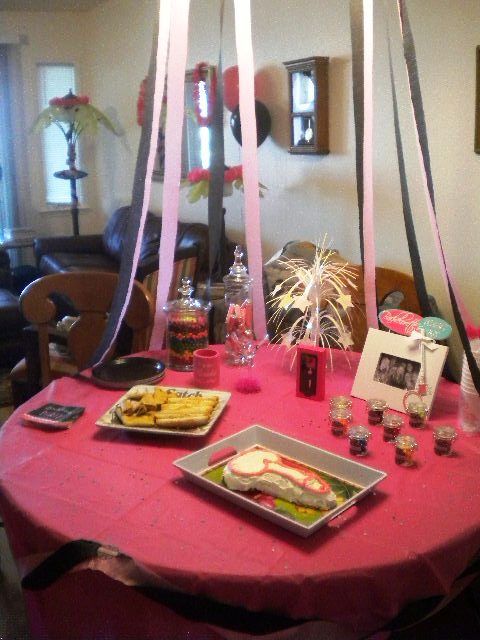 We all grabbed lunch Saturday at Snapper Jacks… and the food was really good, which surprised us! 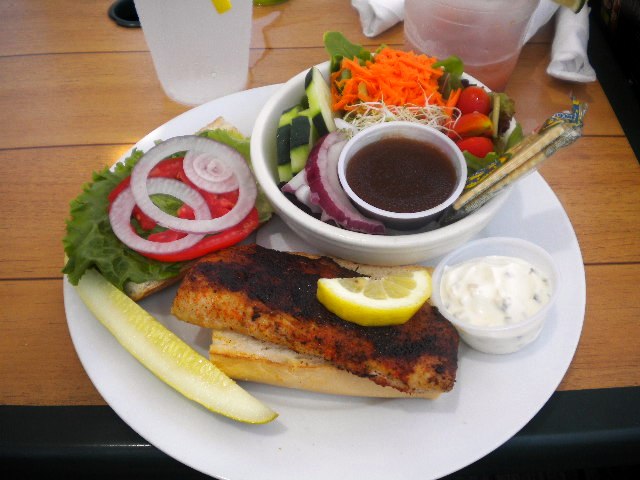 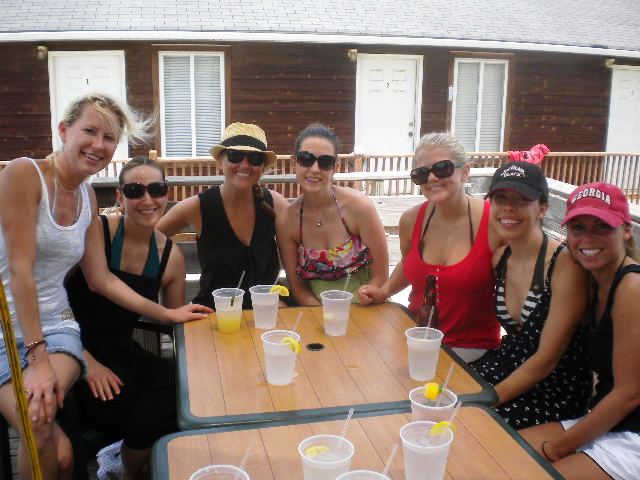 We had a mini high school reunion on Folly Beach… 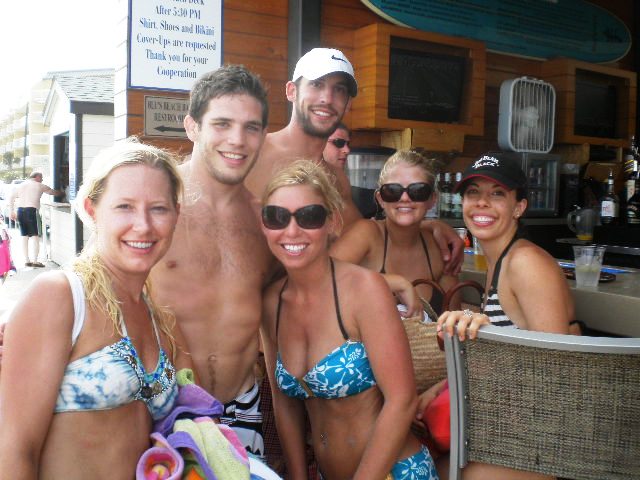 We also took a long walk on the beach… where… I kid you not, a seagull pooped on me.  What are the odds?! Luckily the ocean was right there 😉  **No picture of this because… well, EWW**

then it was time to head to dinner!

The food was delicious and they had wine flights! I had the pinot noir wine flight… what a brilliant idea! 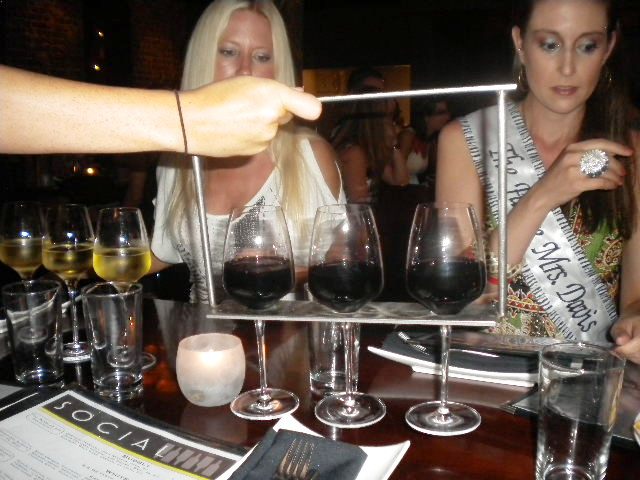 I still can’t believe we got our whole meal for free! We must have ordered 1 of everything on the menu. Wowza!  After dinner we pretty much danced the night away and had a blast. As always, the weekends fly by fast, and I was back home before I knew it.

Because I can never get enough of the water, I played in the lake for a while with Hubbs and Bugs, then after an early dinner and a little bumming on the couch, we called it an early night. Whew, did I need that sleep!!

Now, to get myself going… 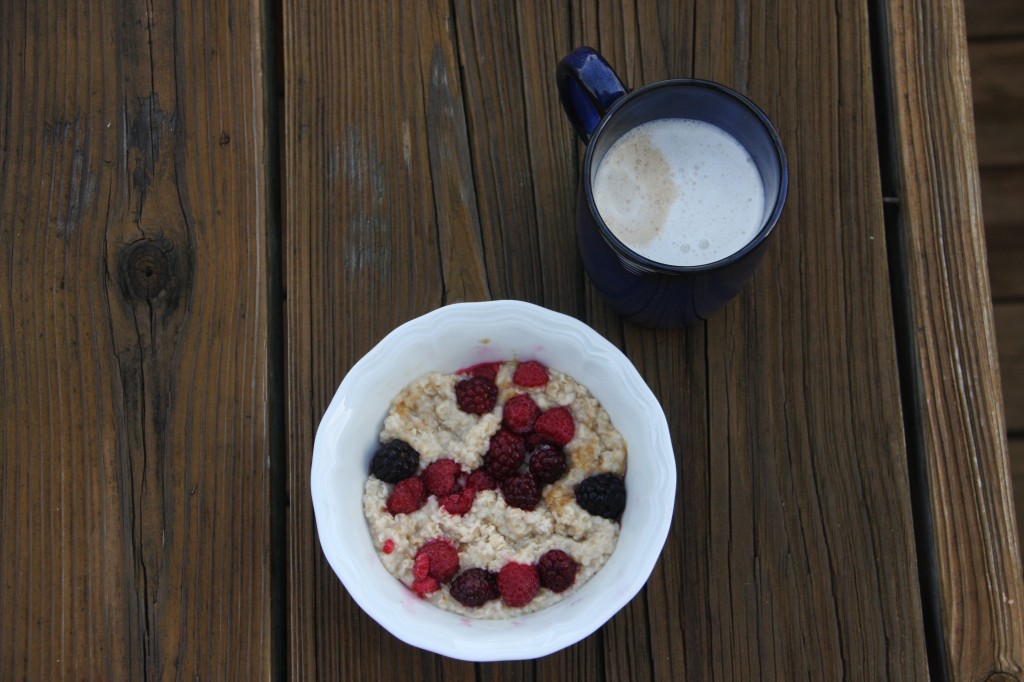 Instant oatmeal, with the sugar chunks removed, plus berries!  I suppose it isn’t the best thing to eat a breakfast when the prep works requires picking out the sugar chunks, but oh well 😉 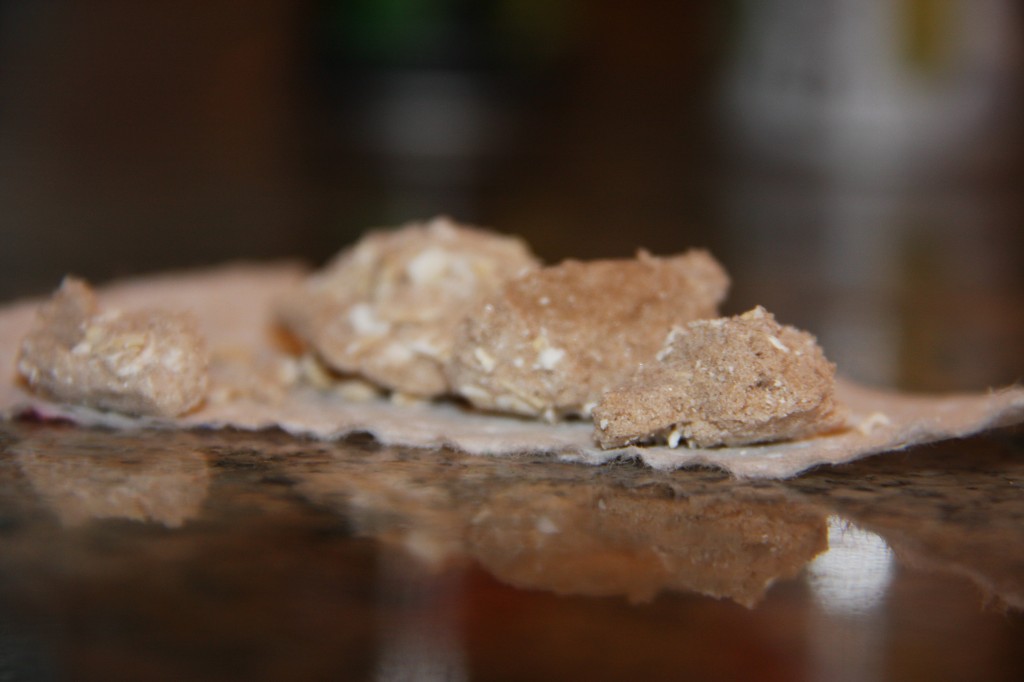 Despite the coffee, I’m still moving a little slow this morning… thus the lack of any witty commentary.  Please accept my apologies and do return once the coffee has done it’s thing 😉

How was your weekend??

Man o man, the coffee never fully kicked in… I guess my body needs the real fix : sleep.  2 nights in a row of staying up to 4am takes more than 1 good night’s sleep to fix, I guess. Or… maybe it’s just a sign of how infrequently I stay up that late anymore… either way, I’m dragging.

But despite being tired today, I decided I need to new kick to my work out routine.  It seems everyone is a runner, and I can’t fathom why it’s so hard for me.  So after hearing several success stories about people using the Couch to 5K training system, I splurged 😉 on the $2.99 app for my iPhone!

It’s actually really cool… you create your own playlist from your itunes, your run with it and it tells you when to walk and when to run (love intervals!), and it tracks your success.  I must admit, day 1 was a bit more difficult than I thought it would be.  I figured it would be mostly walking, since if you truly are coming from the “couch”, you wouldn’t have much stamina, but it was a pretty solid mix of 60 seconds jogging to 90 seconds walking.  It wasn’t hard, just not as easy as I anticipated.  The heat didn’t help though… I’ll be doing it from now on either earlier or late in the day.

It did, however, feel great to get in a solid walk/jog before lunch.  Speaking of lunch… 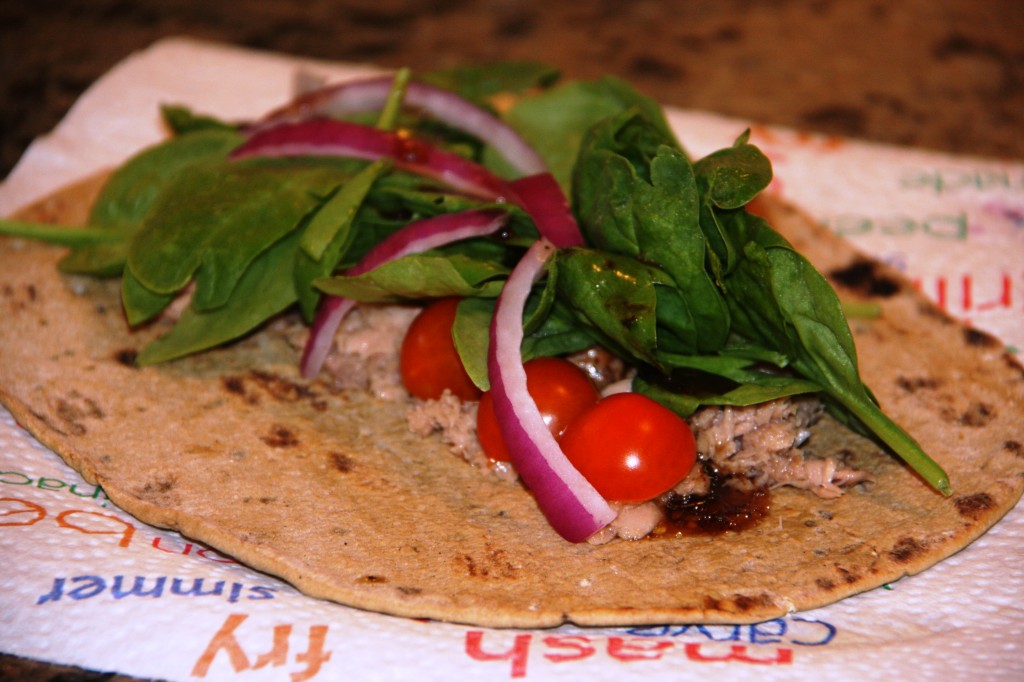 Flatout wrap, tuna, spinach, red onion, 4 cherry toms from the garden, and a drizzle of Newman’s!  It hit the spot and I felt refueled… for a little bit 😉

I was feeling hungry again and remembered how good Gracie’s bean dip looked, so I decided to try it out. Into the Magic Bullet went: 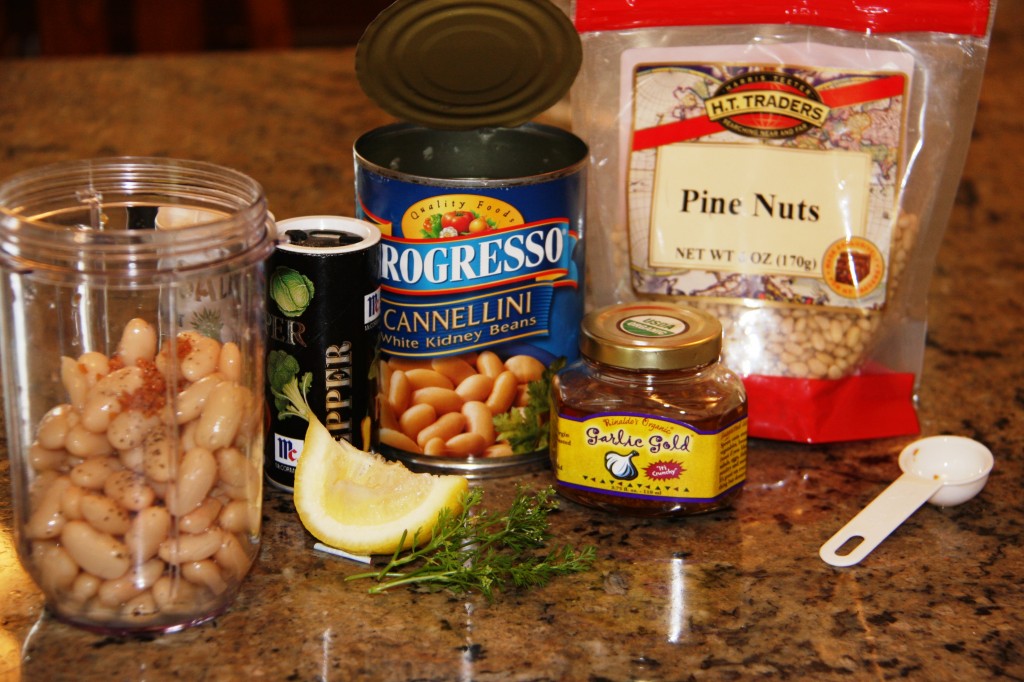 The food process Gracie used probably would work better than my bullet did, but for ease of clean up, the bullet worked just fine.  The result? A really tasty way to eat beans!  It was thick and hearty, with a subtle flavor (Next time I may add a little more garlic gold for flavor and a smoother texture) 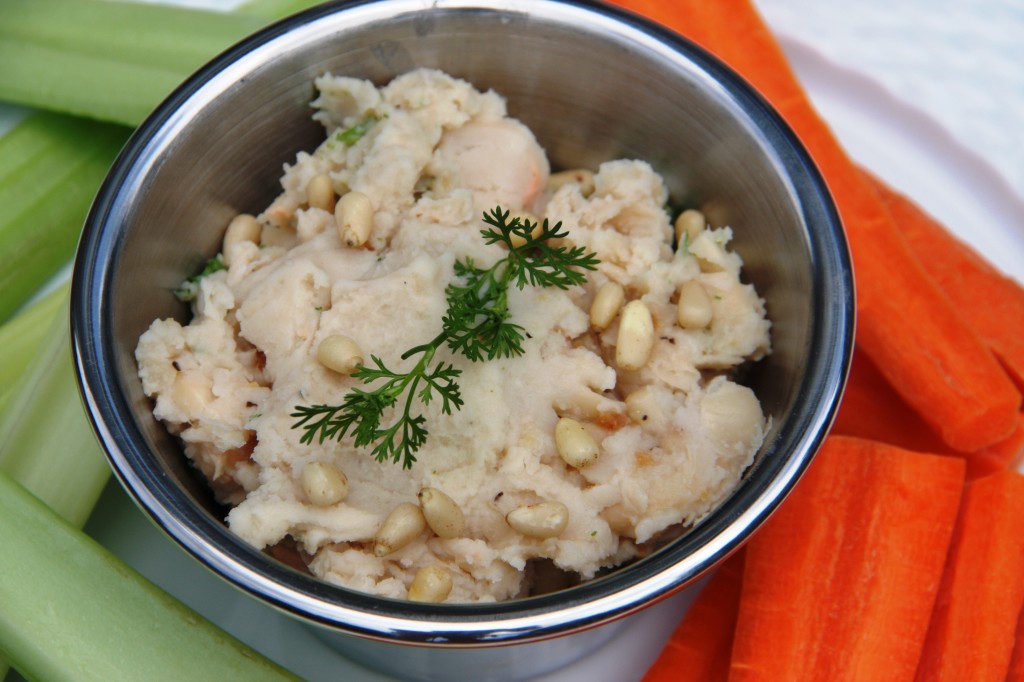 I also sprinkled on some pine nuts, as Gracie suggested. It’s such a hearty dip that you would either need a strong cracker or veg to stand up to it.  My carrots and celery were up to the job! It was a delish afternoon snack. 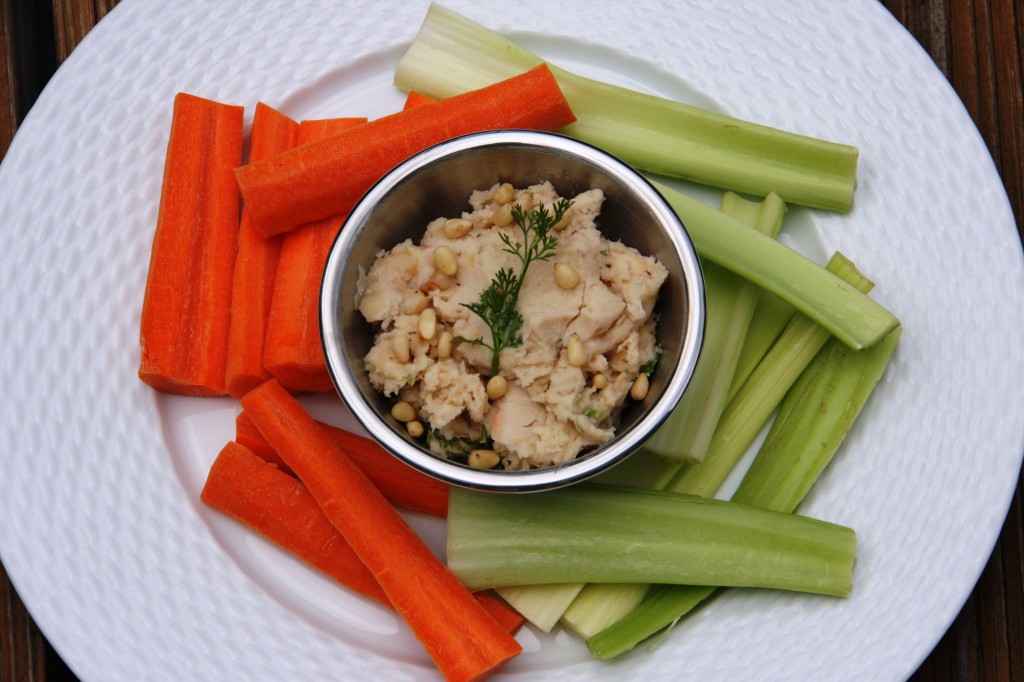 I’ve got a decent amount of work to do this afternoon… let’s hope I can stay awake for it!

Phew, my energy finally kicked in 🙂  and then there was some snackage to keep it going…

I know I am behind on the trend, but I finally got around to trying these: 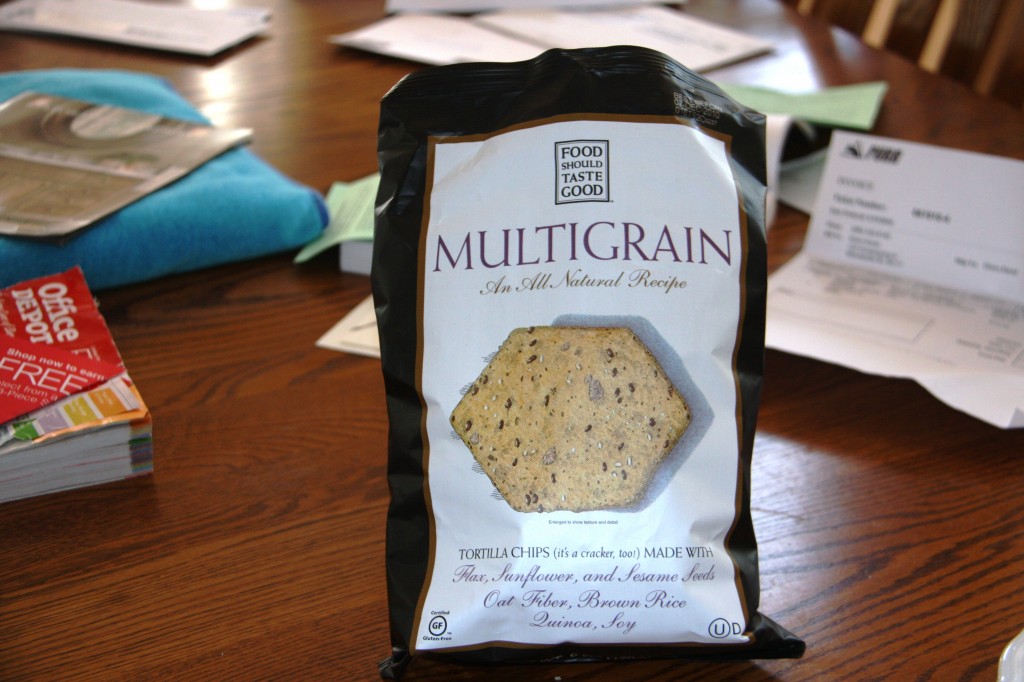 As if y’all didn’t already know, these are delish!! Crunchy, just enough salt, taste fresh and have great ingredient list, too. They’re a keeper! Please disregard the mess that I usually try to hide 😉  I enjoyed them with a little laughing cow 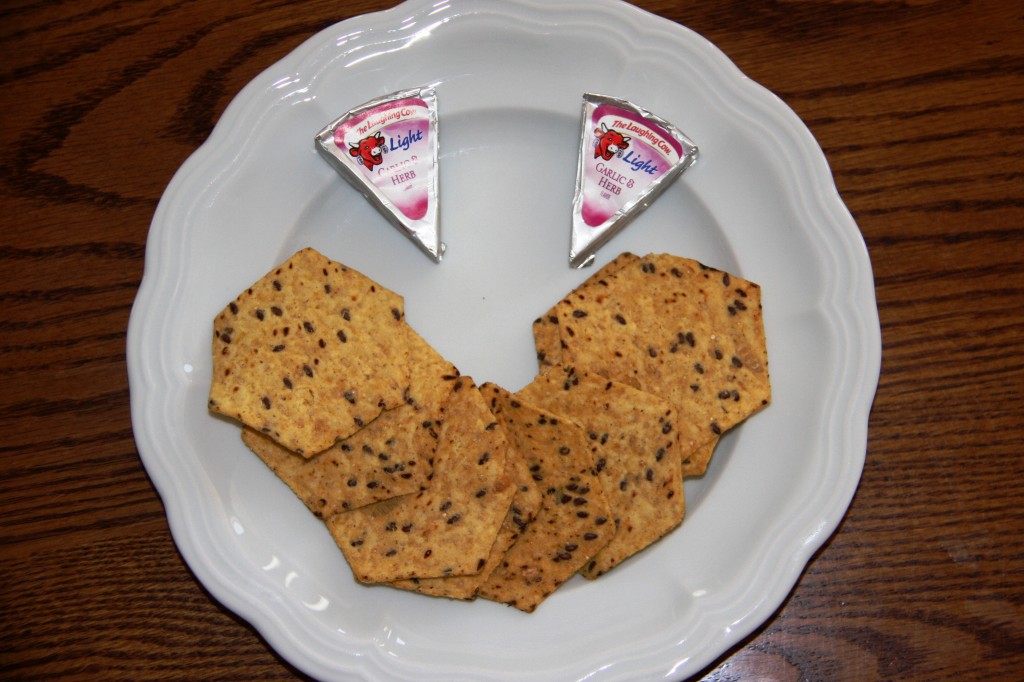 and dessert.  I mean, Chobani!

Dinner tonight… was. BOMB.  And I mean bomb in a good way, like the old school “it is the bomb“.  Not bomb as in “epic fail”.  If you haven’t noticed, I like to use phrases that were cool, um… about 10 years ago.  I’m not quite hip enough to by privy to all the new “cool” words, like ‘epic’.

Anyways, my unruly, overgrown basil plant inspired me to get creative and attempt a first… pesto!  Yup, I’ve never made my own before, and thus, why follow a recipe? I should create my own, right? Right. 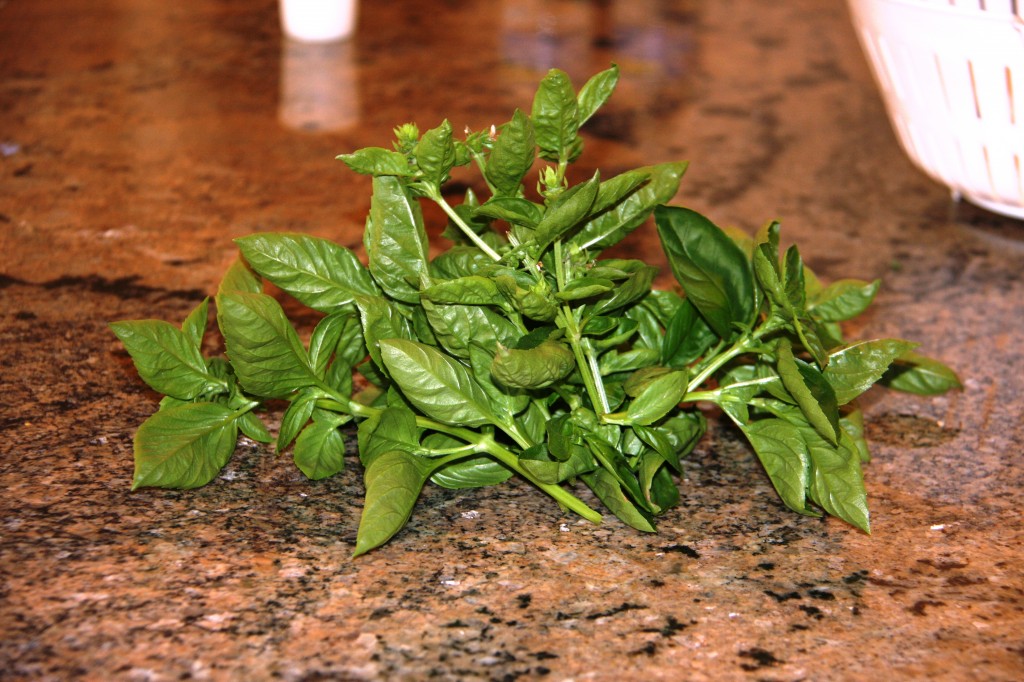 …picked off the stem, washed and stuck in the food processor with some buddies… pine nuts! 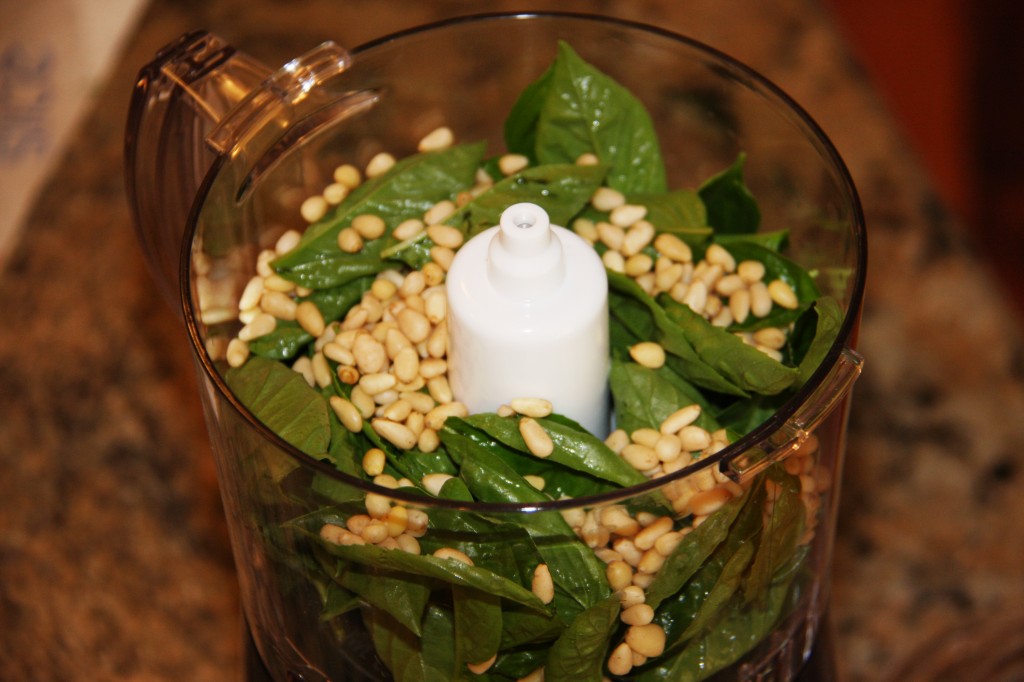 After being pulsed a few times, shredded parm cheese and 2 garlic cloves joined the party. 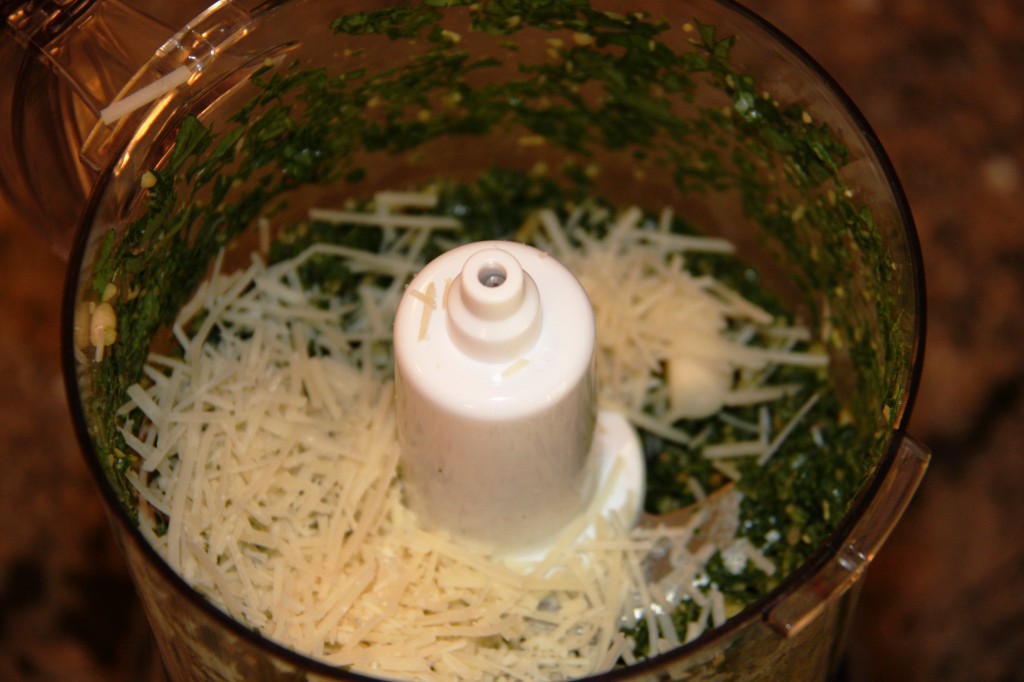 Being fashionably late, olive oil finally remembered to attend (I seriously almost forgot the olive oil… that would have been interesting).  I didn’t use too much… I drizzled it in, but I’d guess about 2 Tbsp? 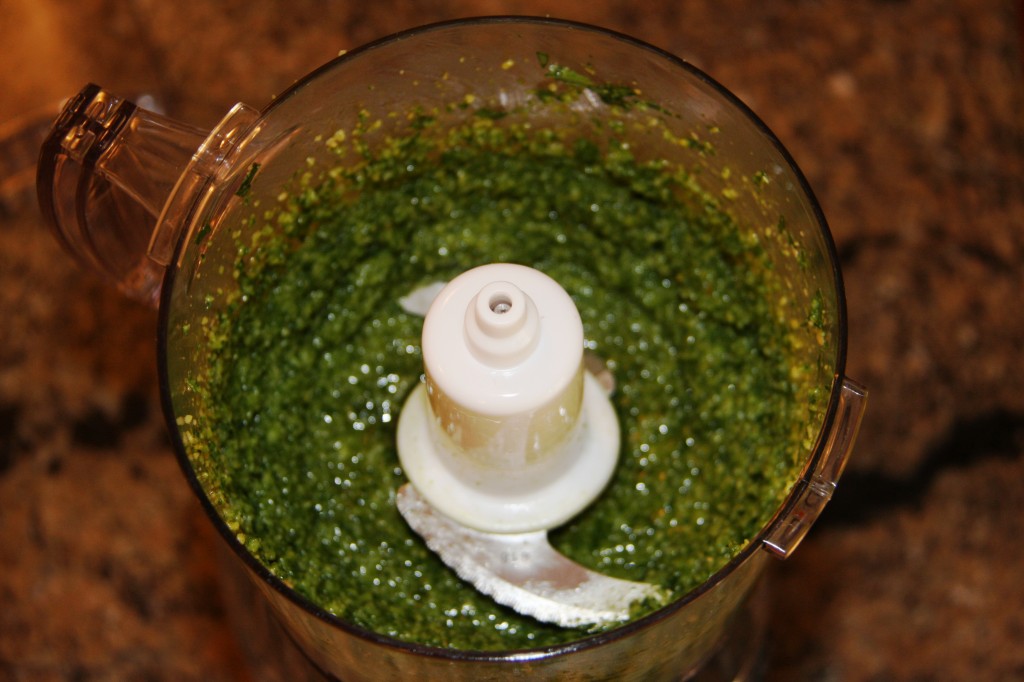 Now… what to do with it?  With a little inspiration from my favorite Amy’s frozen pizza, the answer was easy.

I used part of a whole wheat pizza dough ball I got at the Teeter. 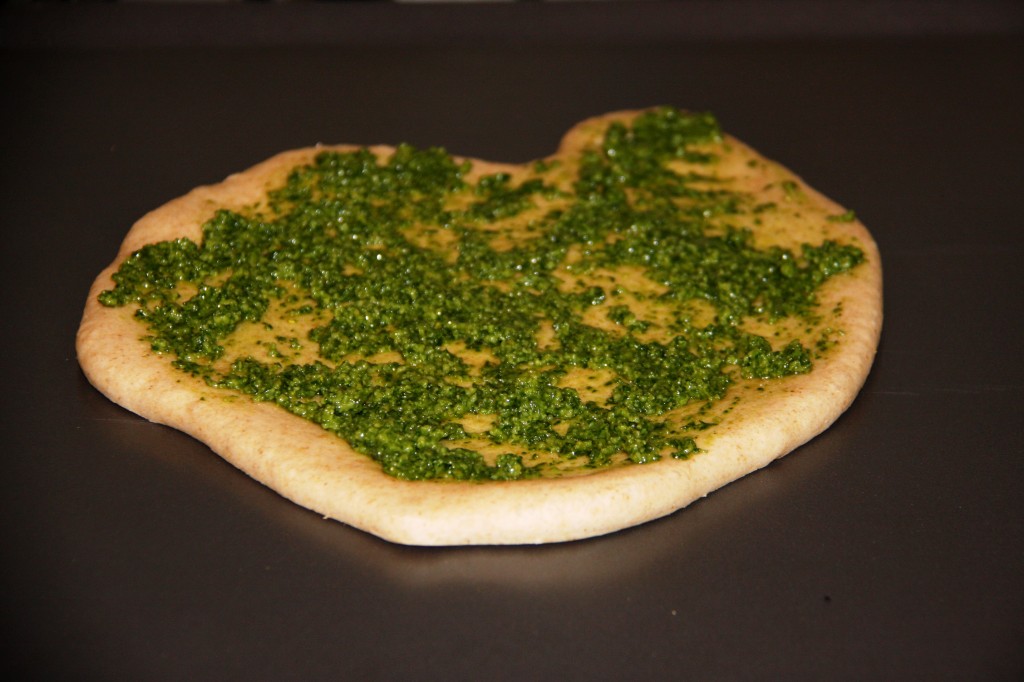 Topped it off with my pesto, fresh tomato (I love these ‘maters from the road side stand!!), broccoli, fresh tomato and a little s&p. 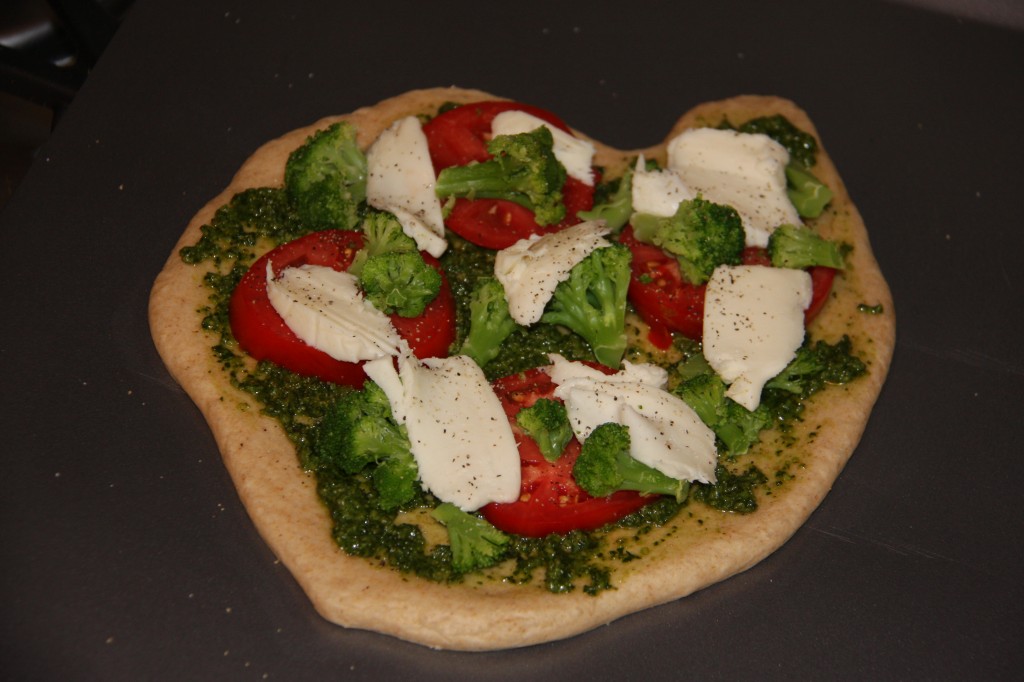 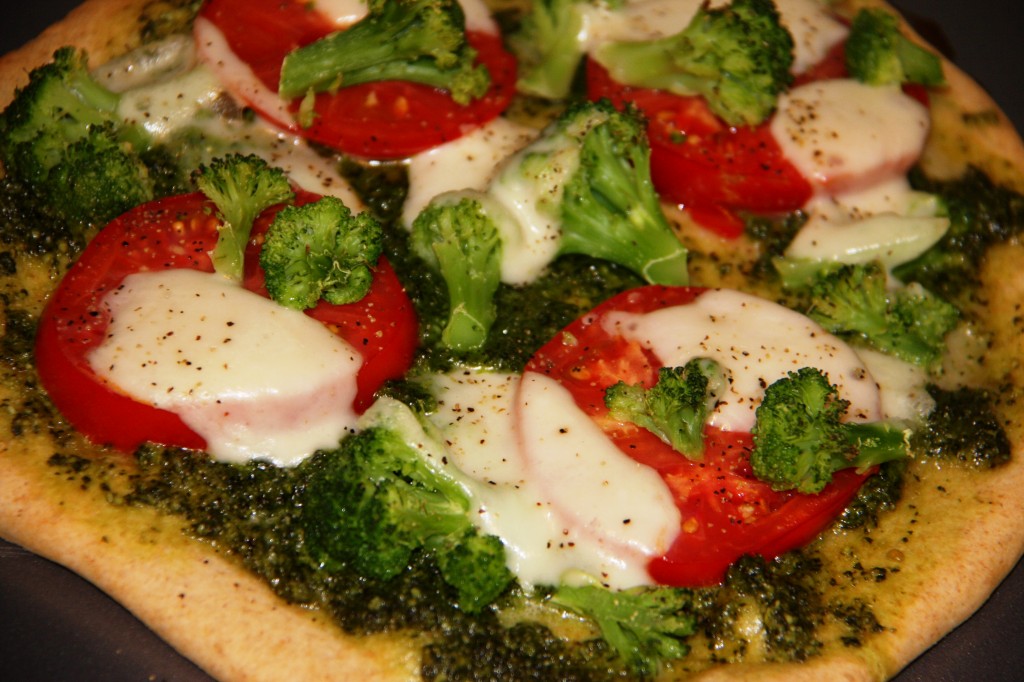 I also added a little Texas Pete on top for a kick of spice and it was Ah.Maz.Ing.  Amy’s has nothing on me!

Now I’m doing some blogging, a little work, and watching Frank make a ballsy move on the Bachelorette.  I hate when Hubbs works late, but at least he isn’t able to make fun of my love for trashy tv 😉