Obviously the highlight of the weekend was Saturday, which could easily be referred to as a perfect day. After sleeping in (until about 8:45am… which is really sleeping in for us!), HUbbs and I made some breakfast and signed up for a tennis court. We ended up only being able to get a court in the middle of the day (now I know why the courts are free from noon-3:00pm… it’s HOT). Despite the heat, it felt great to get out there and run around… and I almost won! After the longest set in the history of tennis, I ended up losing 11-9.

We came back home to play with the bug in the lake for a little bit and do our best to exhaust her. She didn’t have a ticket for the concert, and was going to have to stay home. Before I knew it, 5:00 was here and we were off to the big city! I was excited, which resulted in self portraits on the way into Charlotte… 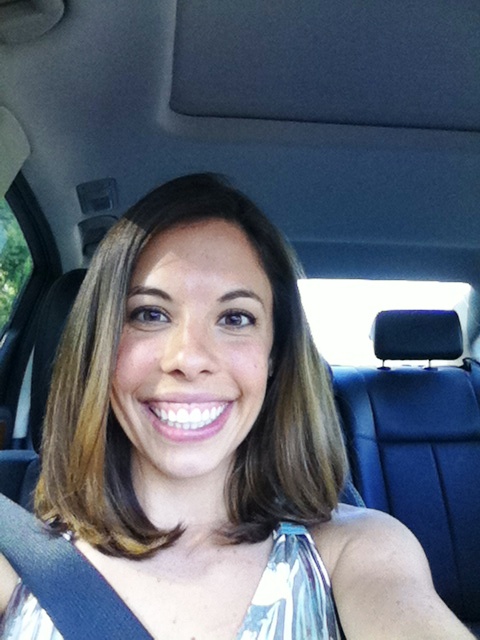 We arrived early for our reservations at MEZ. Mez is a new restaurant in the Epicenter (a cool area of uptown that has bars, restaurants, dueling piano, bowling, etc all in one centric location), and is right across from Time Warner Cable Arena. 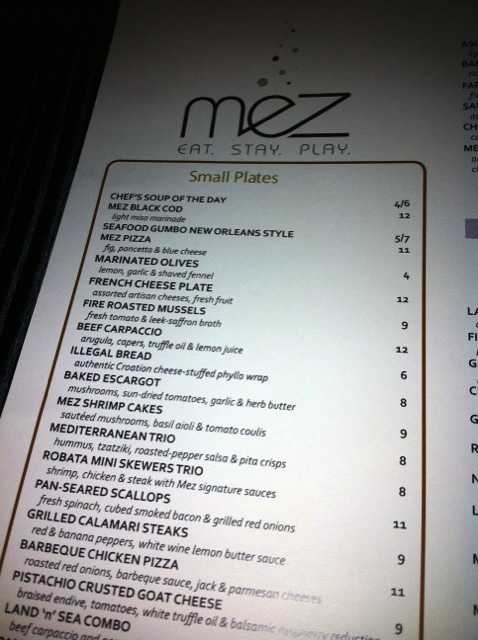 We were feeling ‘fancy’ and Buble-ish (because that’s a word, right?), so our drink orders reflected the mood… a Manhatten for the Mister and a Kettle One Martini, straight up with two olives and a twist for the lady. (I totally feel like James Bond when I order my martinis…) **Please disregard the scary eyes…** 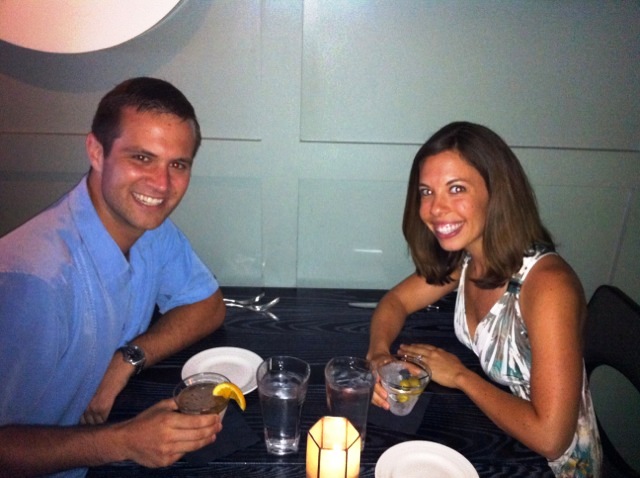 Although entrees are available, we decided to do all small plates… which made for a leisurely dinner with wonderful conversation. We hadn’t had date night in a while, and it felt so wonderful to spend an evening out with my incredible husband. OH! And the food was pretty wonderful, too 😉 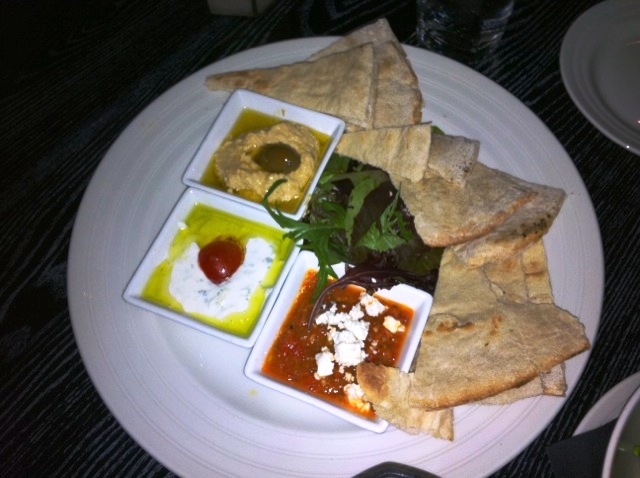 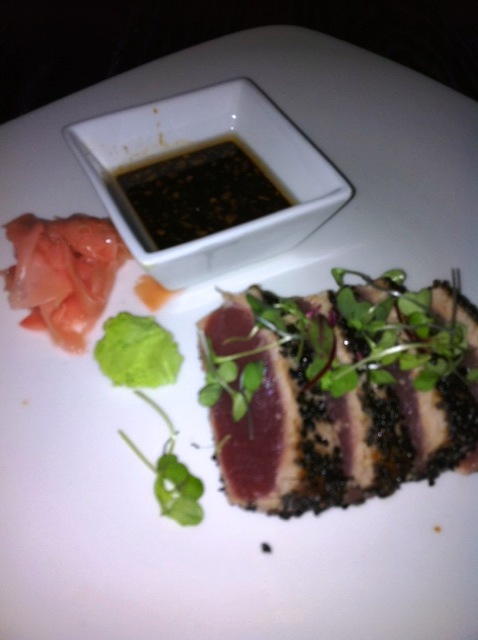 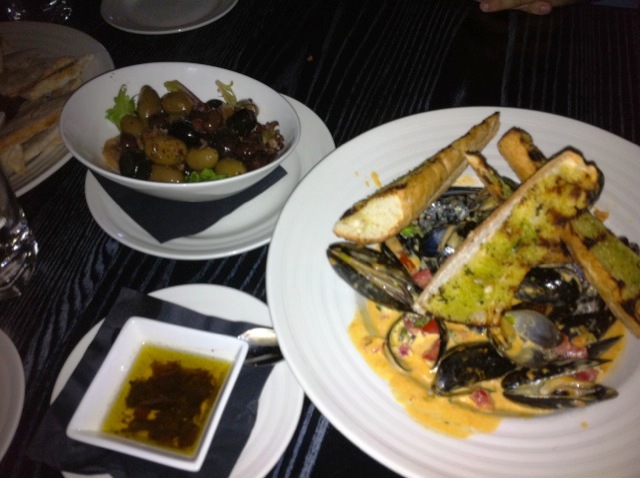 Marinated olives and MUSSELS in a delish tomato-y sauce (I’m sure those are the same words they used to describe it on the menu ;)) 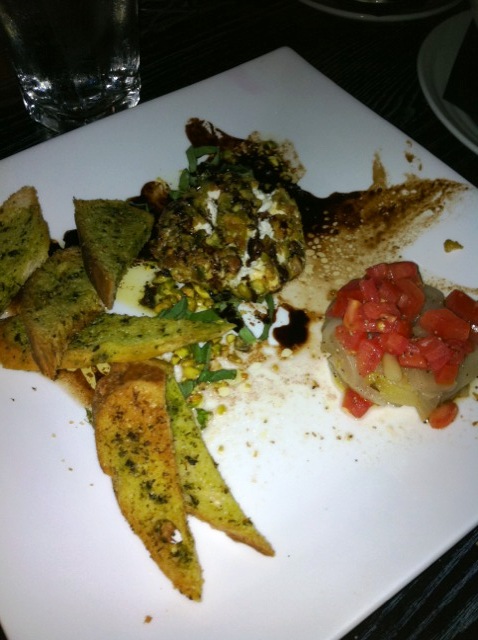 And finally, my love, GOAT CHEESE!

I love small plates because you get a bite of so many different flavors. I’d eat dinner here again. Afterwards, we headed to the concert, and after a disaster at will call (note to self: ALWAYS get paper tickets), we were in! We grabbed a couple brewskies before going to take pictures with Michael Buble himself: 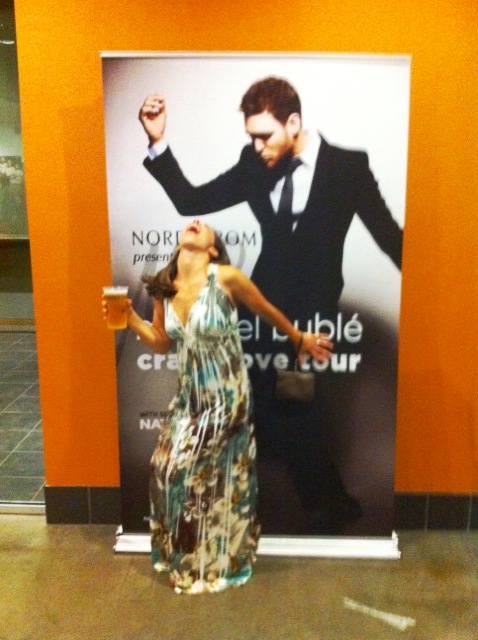 Hubbs wasn’t as excited as I was about the pictures, but he was a good sport: 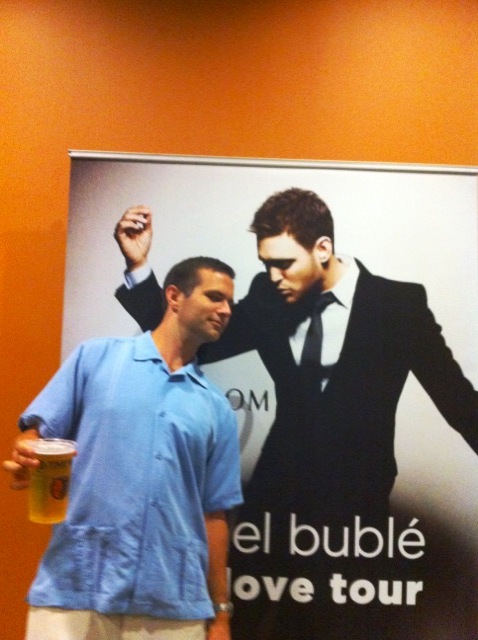 We made our way to our seats, that for the record, were great! Front and center, but in the back, where the seats start going up. My iPhone failed me miserably in the picture taking department, but I tried my best. The opening act was all a Capella (think Motown meets Glee), and was in.cred.ible.

Then it was time for the man himself… 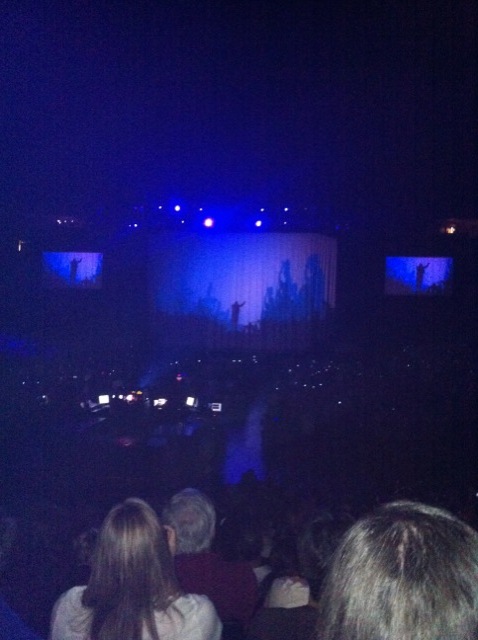 You guys… WOW. Before the concert, I loved Michael’s (yes, we’re on a first name basis) smooth, Sinatra-esque voice and his wonderful, catchy songs, but after the concert, I am IN. AWE. of him. He has such a great personality! Actually, great is a terrible word to describe him, because great is overused and pretty nondescript. In concert he is witty, incredibly interactive with the audience, gracious, genuine and you can see his talent shine. At one point, he even pulled the little piece out of his ear, and with no music, sang to us. That, my friends, is talent.

Check out this clip I videoed… sure, the picture quality is terrible, but listen to him. He’s so gracious…and funny! And I apologize for the annoying girl screaming “I love you Michael Buble” and attempting to sing along in the background… I assure you it wasn’t me. 😉

I apologize for the in depth coverage of the concert for all you non-Buble fans (is there even such thing as a non-Buble fan??), but it was that AWESOME.

Sunday was a relaxing day that consisted of being lazy and playing on the boat… and lunch at The Rusty Rudder so I could eat those delicious fish tacos again! 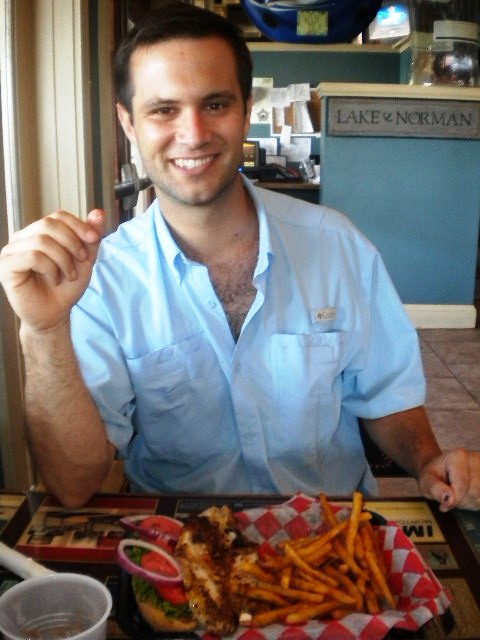 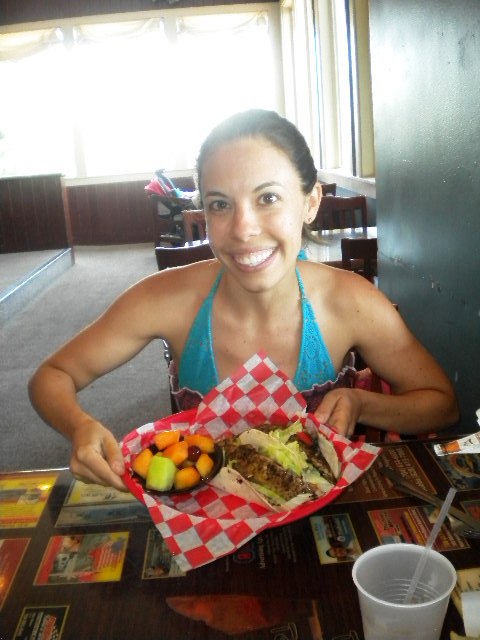 Then to keep with the taco theme, we splurged on dinner… I had to use up the Velveeta in the fridge from last weekend (note… I never buy Velveeta… but since someone brought it and left it in my fridge last weekend, I had to use it up, right??) Enter: Rotel Dip. 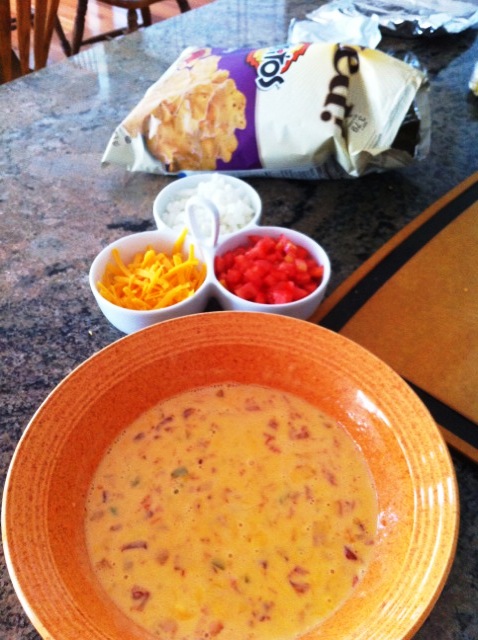 No worries, we didn’t eat all of it… but it was goooooood 🙂

I was pretty full after it, so I only ate 1 taco while we watched the DVR’d World Cup finals (GOoooo Spain!) 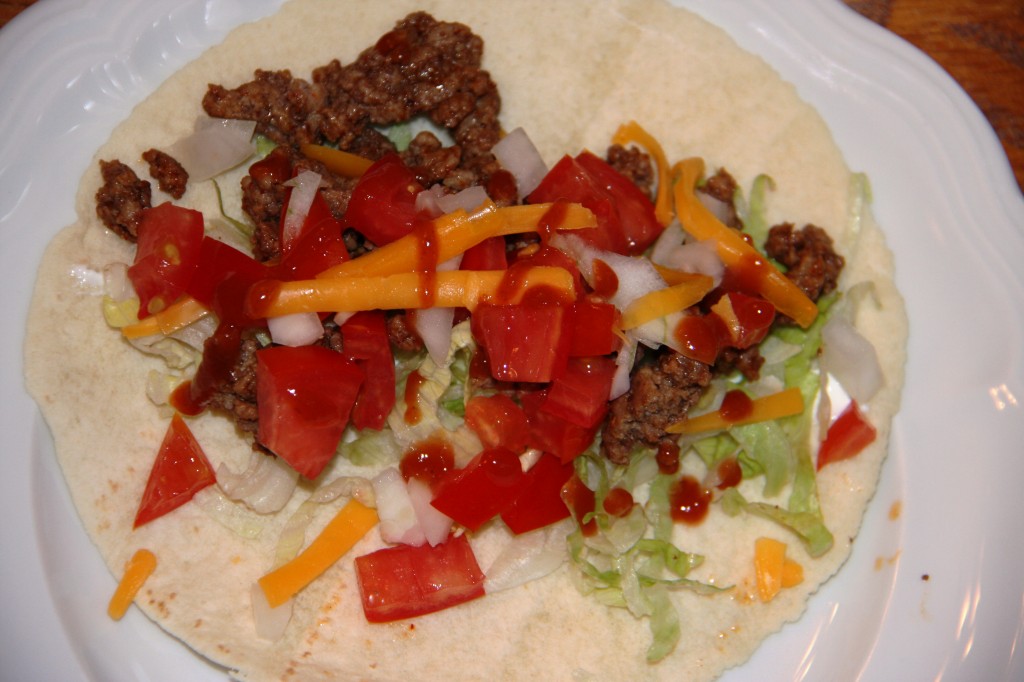 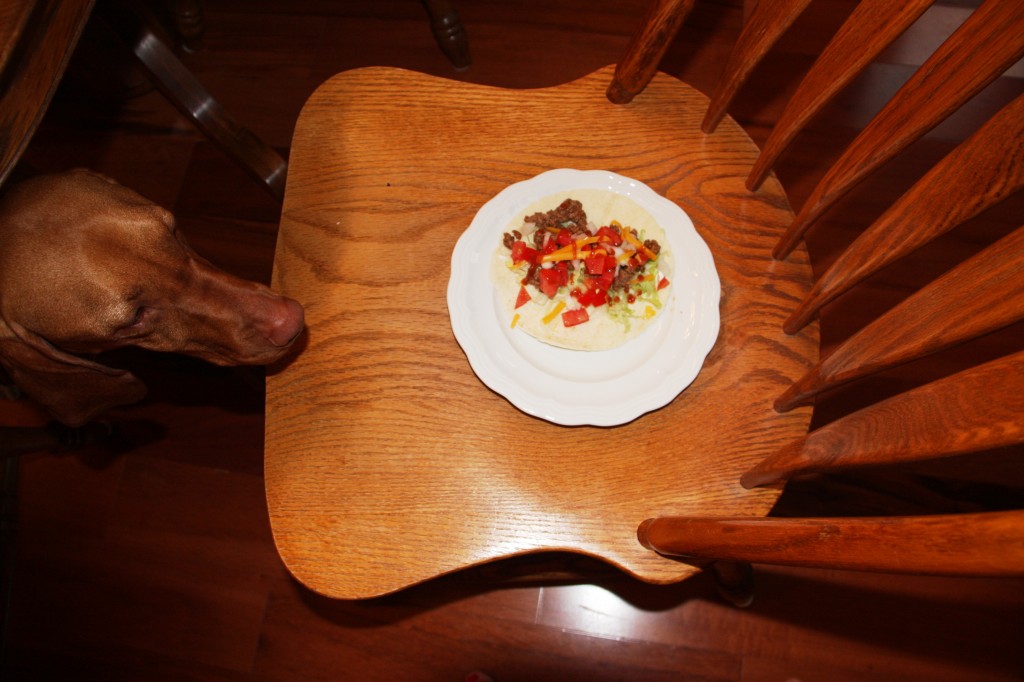 And I guess this all leads us to this morning. I wasn’t very hungry (which is odd, but I guess Rotal hangs out in the gut longer than healthier foods ;)), so I just ate some of these: 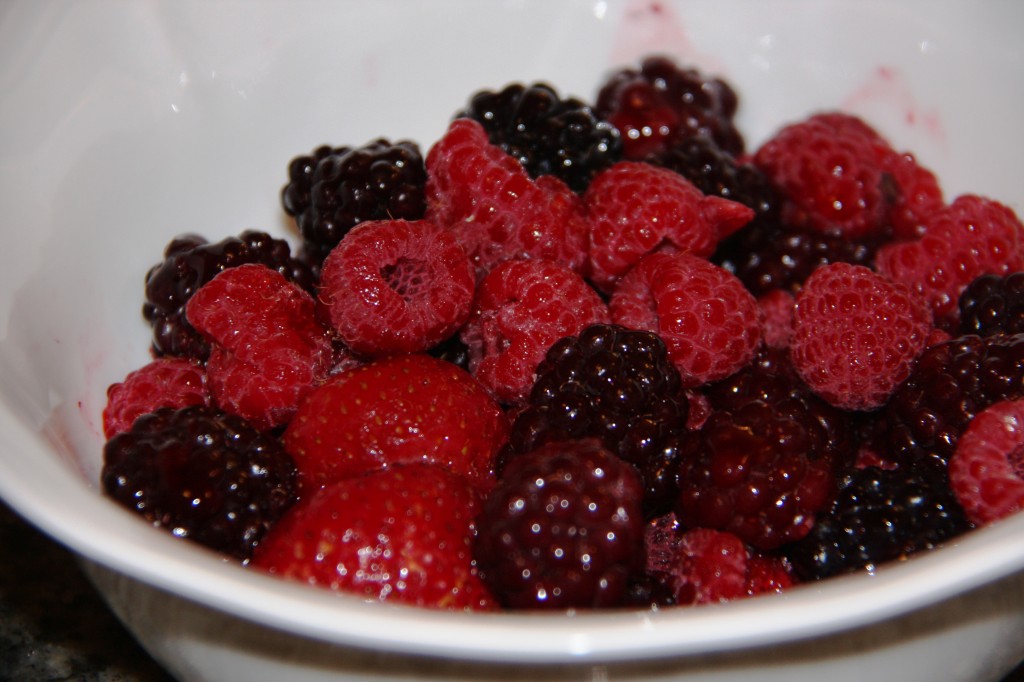 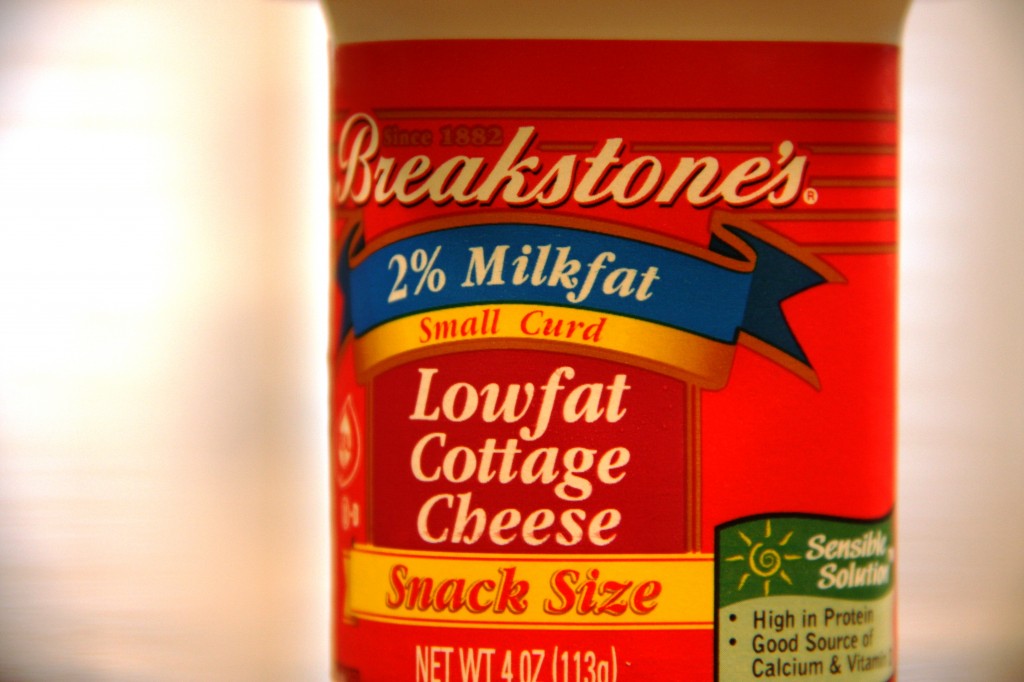 Phew… is anyone still reading my blog at this point? I feel as though I’ve written a novel 🙂

I guess I could have summed it up in the beginning by saying, I had a wonderful weekend! …but you wanted more details, right? Please just smile and nod politely to appease my ego…

I’m glad it’s cloudy/potentially rainy today… days like this make for a more productive day for me (is that odd?). Well, I’ve done enough sharing…so now you tell me….

What was the highlight of your weekend??

I debated forgoing any more updates today because the initial post was so long… but I felt like blogging, so here I am. Lunch was some beans (with nannie’s homemade pepper sauce) and another glorious wrap. I seem to be digging these wraps lately. 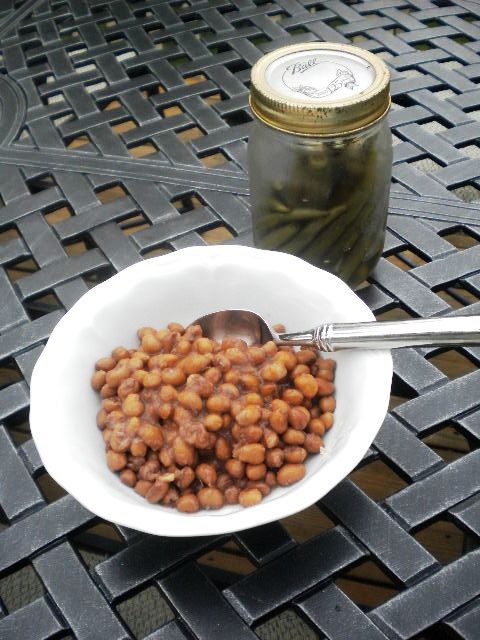 The wrap was a Flatout, topped with hummus, onions, spinach, lettuce shreds, feta, a drizzle of Newman’s, and a scrumptious, REAL tomato. I picked up 5 tomatoes at a road side stand for $2 yesterday. They were grown just down the road, and taste phenomenal. Really. 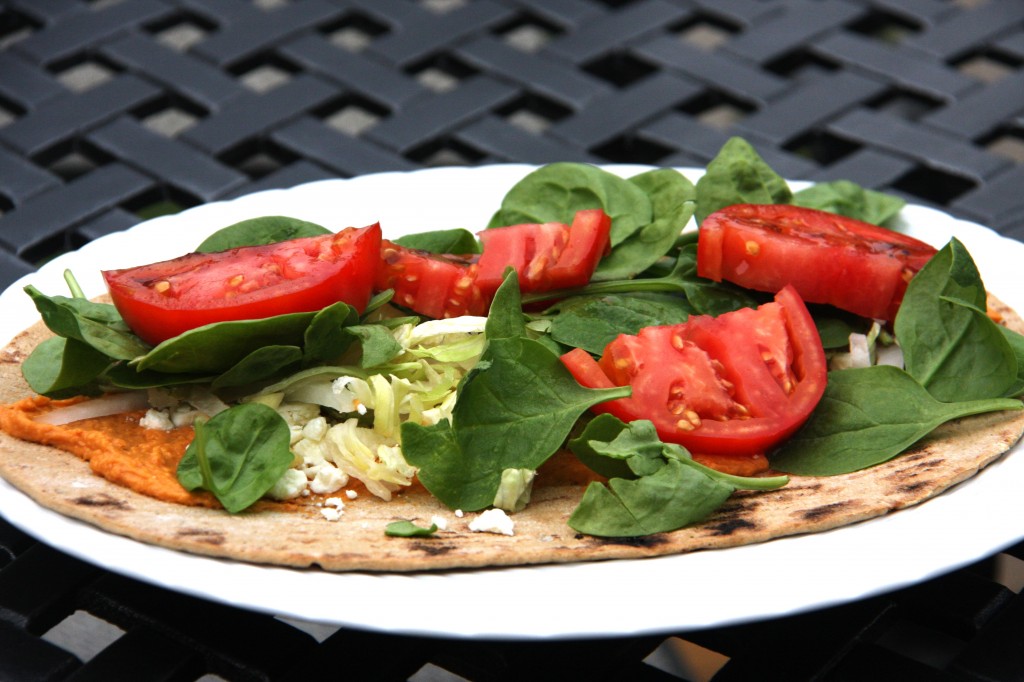 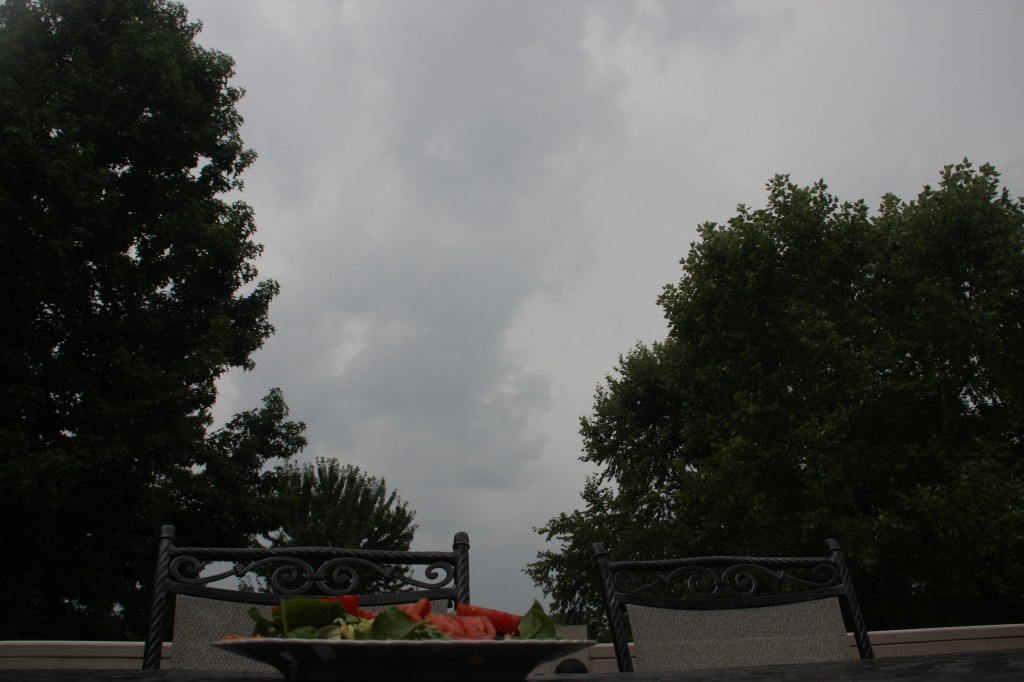 The sky started to darken and thunder was rolling in, so I ate quickly! 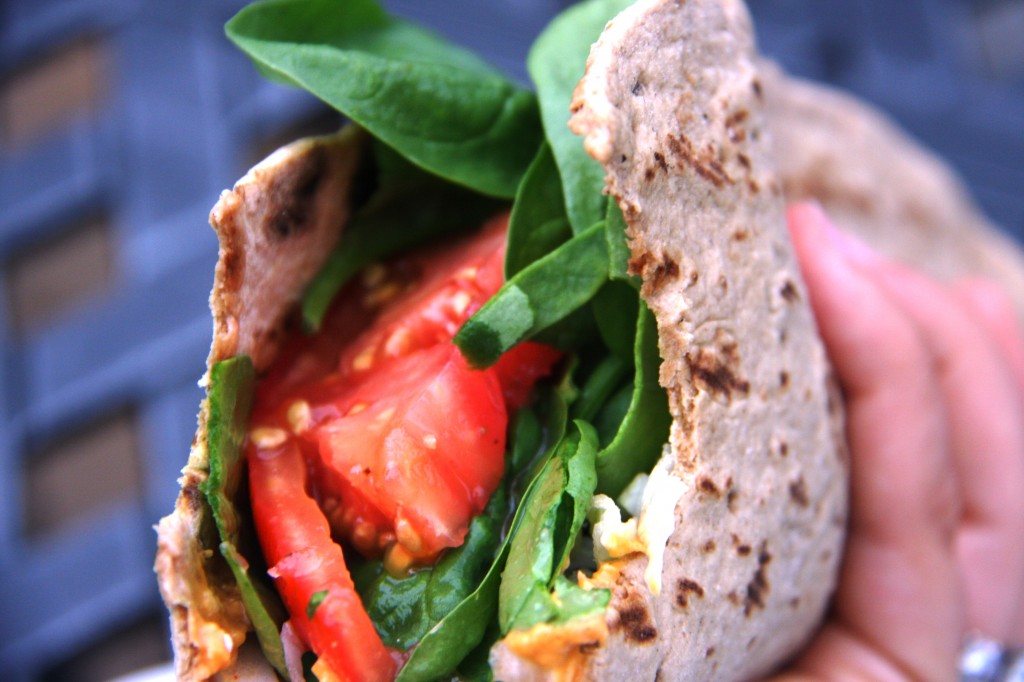 And sure enough… the DOWNPOUR followed. 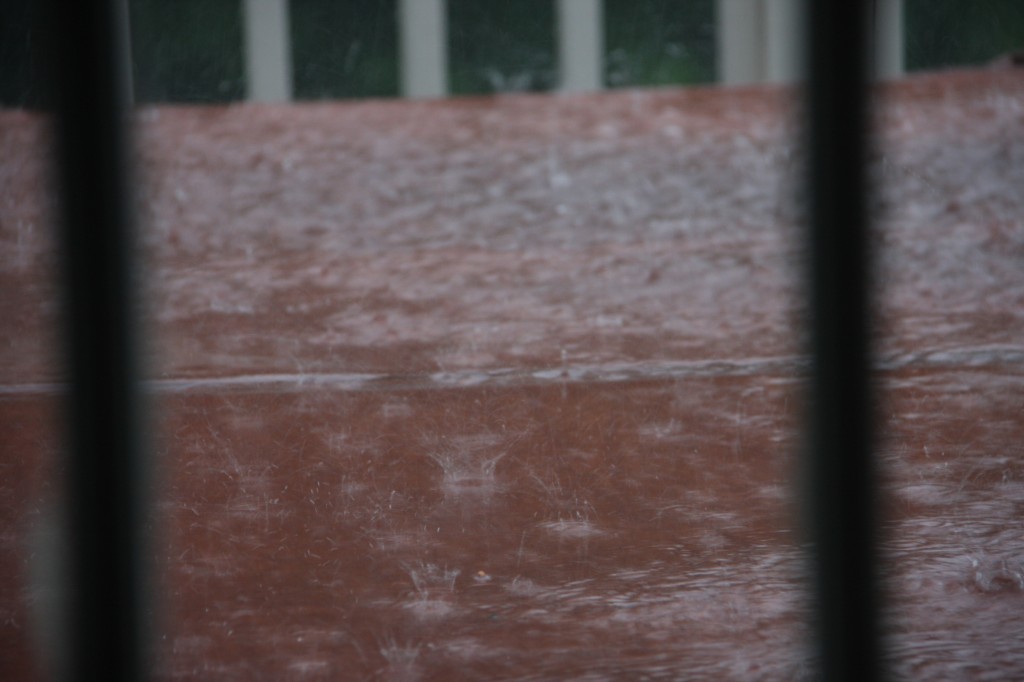 I had a quick trip to the doc in the afternoon for some heart flutters I’ve been having. So now I’m hooked up to a gnarly heart monitor for 24 hours so they can track them. Most likely it’s nothing serious, but better safe than sorry 🙂

I also did work and laundry… and snacked 😉 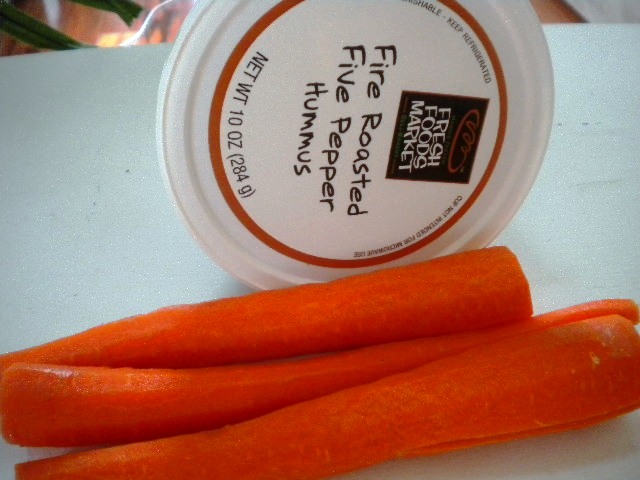 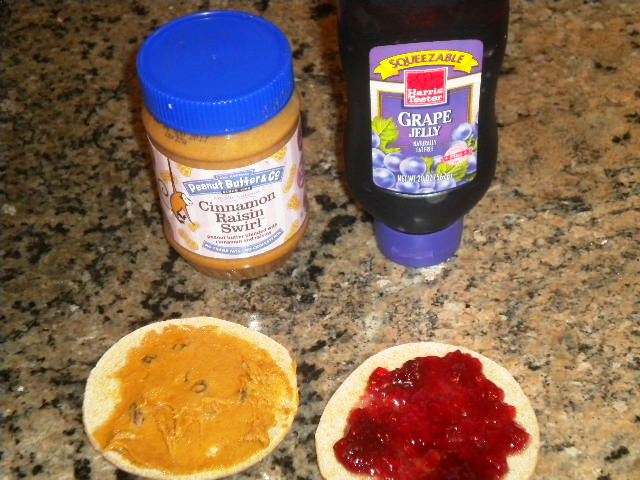 Yup, that’s good ol fashion jelly. It was good and made me feel 10 years old again.

Oh yeah, and Koda “helped” with the laundry. Actually, I think she was saying “Mom, no more laundry. Play time.” Here’s a picture. Just because she’s presh. 😉 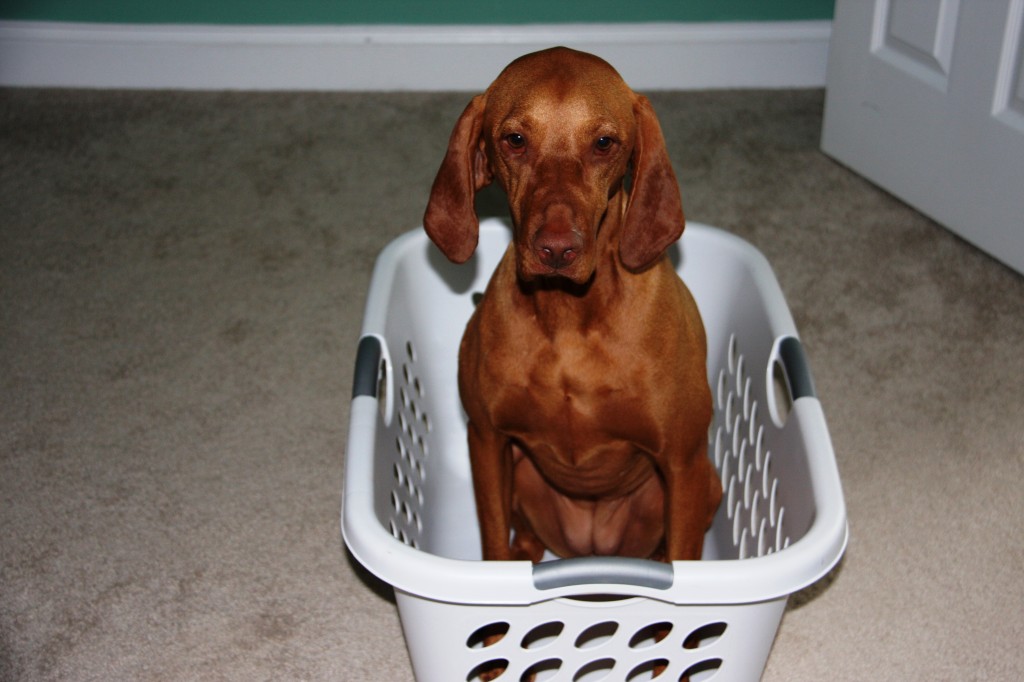 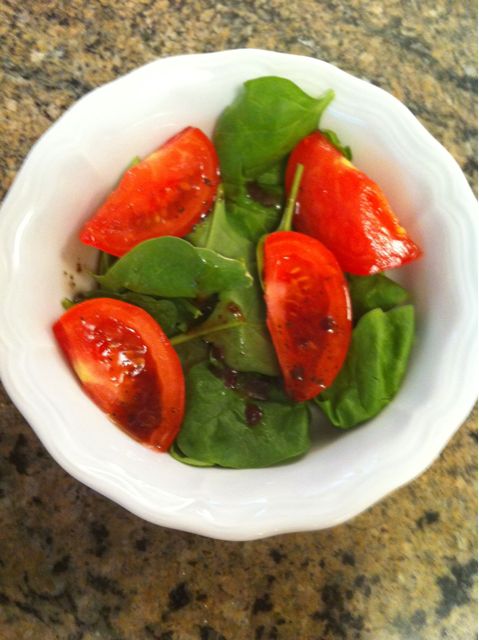 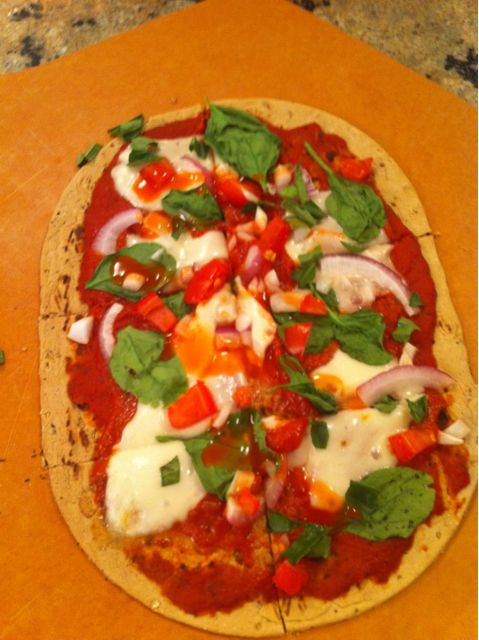 The best thing about this pizza? I get to eat the WHOLE thing. And it was awesome. Now I have to go write down the time because my heart just fluttered… So annoying! 😛