Get your family ready for the Christmas season with the best Christmas movies for preschoolers, ages 3-6 years old. 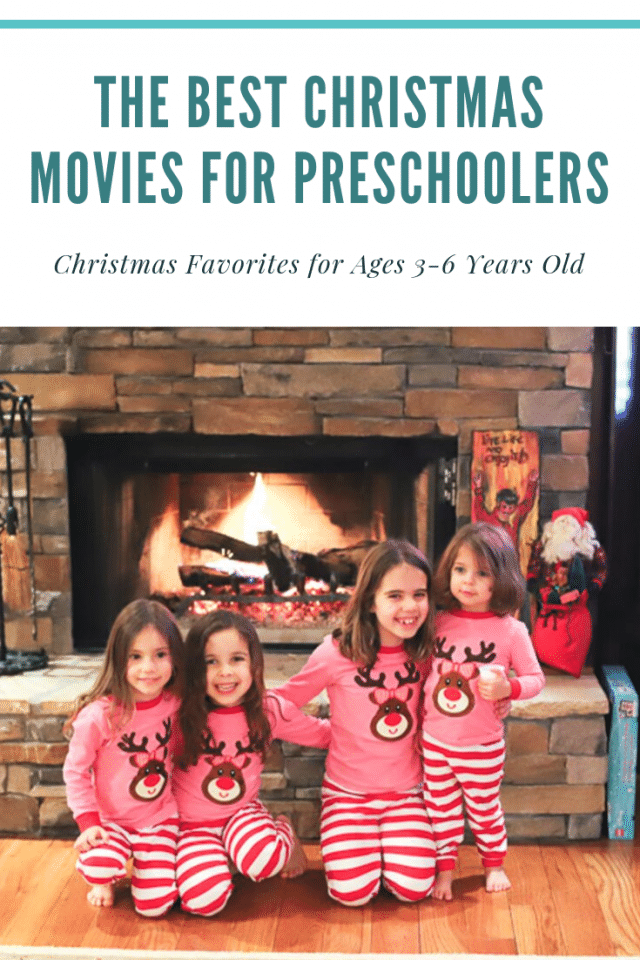 Twas the Friday before Christmas and all through the house.
Everyone was stirring, but at least there was no mouse.

The new towels were folded and had been put away with care
Leaving David to roll his eyes at each matching pair.

Family would be arriving soon and the kids couldn’t wait;
There’d be cookie decorating to do if they didn’t come too late.

Some food had been prepped, most presents were wrapped,
And now all I wanted was a long afternoon nap.

But the kids, oh the kids, they wouldn’t leave me alone.
I’d start drift off then they’d jump on me and I’d moan.

But what to my wandering eyes should appear?
Netflix- loaded with movies for the end of the year.

So onto the couch I piled the kids
With their blankets and loveys and waters with lids.

I flipped on a movie with a swift, directive click,
And there on the screen appeared the man himself, St Nick!

With the girls enthralled with the magic on the screen,
I was able to get in my nap… without being mean!

Though the above rhyming may prove that I’ve officially surrendered my sanity for the year, I must confess my deep love for Christmas movies. While I also love making edible Christmas crafts with the girls, sometimes it’s nice to just all cuddle up together and relax. In December I loosen up a bit on our household screen stance and embrace all the wonder of Santa, Rudolph, Frosty, Mickey, and all the rest of the gang!

This year with Hailey being six, we’ve dipped our toes into the next level of movies (I’m looking at you Home Alone!), but for the most part we stick to the Christmas movies for preschoolers (movies that are appropriate for children five years old and younger). We’ve dutifully done our research and can now report back with our stance on the best Christmas movies for preschoolers and all kids under five years old. 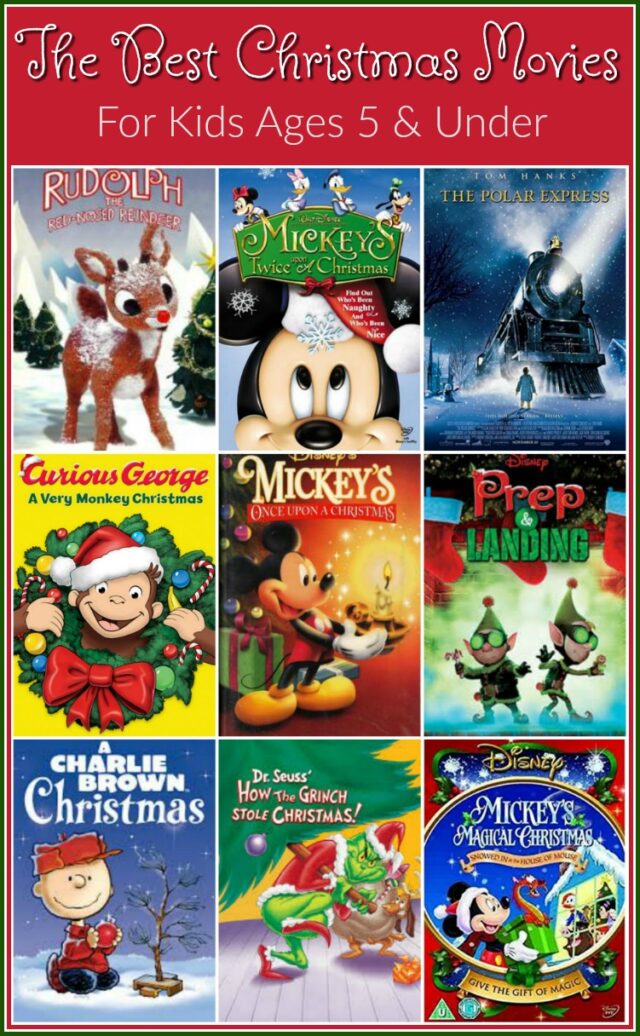 The Best Christmas Movies for Preschoolers

Mickey’s Once Upon a Christmas (1 hr 5 mins): A Christmas themed, three-part video. The first part, “Donald Duck: Stuck on Christmas”, is essentially a retelling of with Huey, Dewey, and Louie reliving Christmas over and over again. Next is “A Very Goofy Christmas”, in which Goofy tries to overcome his son’s skepticism about Santa Claus. Finally, “Mickey & Minnie’s Gift Of The Magi” recreate the classic tale of ironic Christmas selflessness.

Mickey’s Twice Upon a Christmas (1 hr 7 mins): Features five shorts starring classic Disney characters. The shorts include “Belles of Ice,” in which Daisy Duck and Minnie Mouse’s friendship comes under strain during an ice skating competition; “Christmas Impossible,” where Huey, Dewey and Louie travel to the North Pole to try to remove themselves from Santa’s naughty list; and “Mickey’s Dog-Gone Christmas,” in which Pluto runs away from home after ruining Mickey Mouse’s Christmas decorations.

Snowed in at The House of Mouse (1 hr 5 mins): When a huge snowstorm leaves everyone stranded, Mickey and all of his guests at The House of Mouse, including Pooh, Piglet, Belle, Snow White, Ariel and many more of his old and new friends, break out the cookies and hot chocolate to help Donald mend his tattered Christmas spirit. The fun starts when Minnie pulls out their favorite holiday home movies and everyone starts to reminisce. Their magical memories soon put everyone in the Christmas mood-even grumpy Donald, who ultimately becomes the star of the evening.

How the Grinch Stole Christmas -original (26 min): Every who down in Who-ville likes Christmas a lot, but the Grinch who lived just north of Who-ville did NOT! So the cuddly as a cactus Grinch (with termites in his smile and garlic in his soul) tries to wipe out Christmas for the cheerful Who-villains, only to discover: maybe Christmas, he thought doesn’t come from as store. Maybe Christmas perhaps means a little bit more! Magnificently narrated by Boris Karloff and animated by cartoon legend Chuck Jones, it’s an award-winning Who-roast-beast-feast of a holiday classic!

How the Grinch Stole Christmas– remake (1 hr 26 mins): The Grinch tells the story of a cynical grump who goes on a mission to steal Christmas, only to have his heart changed by a young girl’s generous spirit. Funny, heartwarming and visually stunning, The Grinch is fun for the whole family!

Prep and Landing (46 mins): On Christmas Eve, a high-tech team of elves from an elite unit known as ‘Prep & Landing’ ensures homes around the world are prepared for Santa’s visit. But when two hilarious little elves face unexpected challenges and are pushed to their limits, it’ll take a great big effort to save the season. Enjoy a heartwarming holiday classic sure to make everyone’s Christmas list!

The Polar Express (1 hr 30 mins): The Polar Express is the story of a young boy who on Christmas Eve boards a powerful magical train headed to the North Pole and Santa Claus’s home. What unfolds is a journey of self-discovery, which shows the boy that the wonder of life never fades for those who believe.

A Charlie Brown Christmas (25 mins): Christmastime is here. Happiness and cheer. And for Peanuts fans everywhere, it just wouldn’t be Christmas without this classic holiday delight. Christmas lights may be twinkling red and green, but Charlie Brown has the Yuletide blues. To get in the holiday spirit, he takes Lucy’s advice and directs the Christmas play. And what’s a Christmas play without a Christmas tree? But everyone makes fun of the short, spindly nevergreen Charlie Brown brings back – until the real meaning of Christmas works its magic once again.

Curious George: A Very Monkey Christmas (58 mins): George and The Man with The Yellow Hat are having a very merry time counting down the days until Christmas. There’s only one puzzle: neither of them can figure out what to give the other for a present. The Man is having trouble reading George’s wish list and George doesn’t have a clue about what to get for The Man who has everything. Will they be able to find the answers before Christmas morning?

Arthur Christmas (1 hr 37 mins): How CAN Santa deliver billions of presents to the whole world in just one night? With an army of one million combat-style Field Elves and a vast, state-of-the-art control center under the ice of the North Pole! So how could this incredible operation have MISSED one child?! To Santa’s young son, Arthur, it threatens to end the magic of Christmas. With retired Grandsanta, a rebellious young elf, an old sleigh and some untrained reindeer, Arthur sets out in a crazy mission to deliver the last present! Deck the halls with excitement, fun and wonder in this new Christmas classic!

Elf (1 hr 35 mins): This hilarious Christmas film tells the tale of a young orphan child who mistakenly crawls into Santa’s bag of gifts on Christmas Eve and is transported back to the North Pole and raised as an elf. Years later Buddy learns he is not really an elf and goes on a journey to New York City to find his true identity. 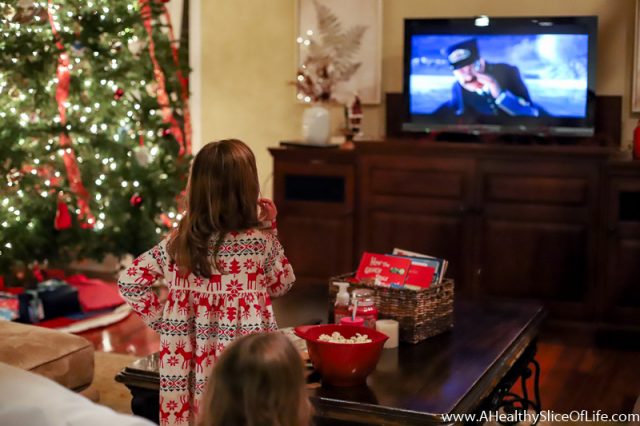 All of the above I can personally vouch for. We’ve watched them as a family and have enjoyed them. I always suggest people check out Common Sense Media for a full review before watching a movie because all kids are sensitive to different things. For example, I’m super sensitive to language/name-calling, but Hailey (6) and Kaitlyn (3) have never really been bothered by scary things. I know all kids are different and Common Sense Media gives a thorough overview of what you can expect!

There are other movies I have heard are good for young kids, but have not watched myself. They include: Eloise at Christmas, The Muppet Christmas Carol, The Santa Clause, and An Elf’s Story.

I would also like to suggest Radio City Music Hall Christmas Spectacular featuring The Rockettes. It’s on Netflix and my girls last year and this year were enthralled!

Are you a kid Christmas movie lover?

Which ones are your family’s favorites?!