It looks as though W(w)AW is here to stay! I really appreciate your feedback.  I enjoy posting all my eats weekly and it was nice to hear you like it, too.  Also, sounds like a lot of you like the nutrition breakdowns- I’ll do my best to add those on to my recipes, too, if you’re interested?

Today, though, is all about the BUMP! The 6 month bump to be exact. 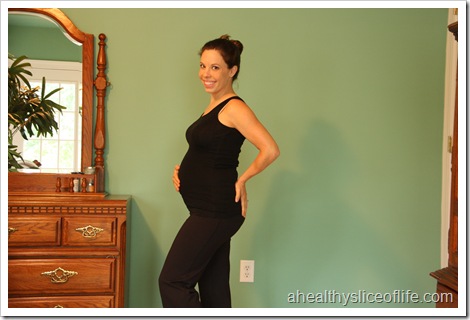 Tuesday I graduated to 24 weeks (6 months!!) and am only a couple weeks away from my THIRD trimester. What? When did that happen?

It’s also exciting that 24 weeks is when the baby is considered viable, meaning that Baby D would have a chance at surviving if s/he chose to come out now… but I’m hoping we still have a lot more time!

Baby D weighs over 1 pound and is the length of an ear of corn.  S/he is also starting to put on fat and developing blood vessels that will turn the skin pink and allow the lungs to function (in a couple more months!)

Oh, and my uterus? Is the size of a soccer ball according to the experts. Look at me- already a soccer mom 🙂 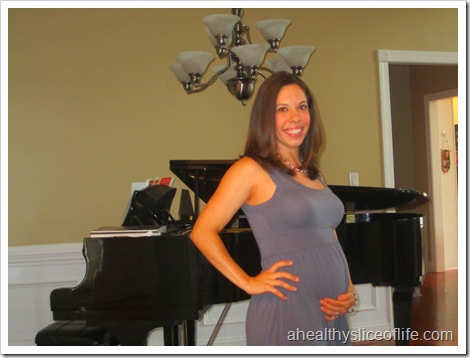 Now, it’s time for the breakdown…

Pretty darn good! Better than I ever thought I would at 6 months pregnant.  My calf cramps during the night have subsided a bit, and I’m now an expert at making my way to the bathroom in the middle of the night without opening my eyes. 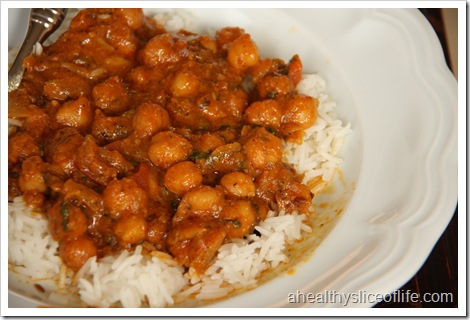 Hmm… not much! 😉 Kidding of course.  This week has been interesting because I’ve noticed cravings (which I haven’t had in forever) return.  Mostly it’s for Indian food, but also the infamous carbs.  I’m loving bagels (shocking) and Love Grown Granola.

My appetite has been really perking up this past week, too, so I feel like I’m eating more often, which is fine.  And I’ve felt a little heartburn from time to time, which I never have experienced before.  Seems the little one loves spicy food, but my body isn’t so sure?

How I’m Workin’ It

I’m still very pleased to report that my exercise routine has been rockin’! I’m actually staying active closer to 6 days a week than my 4-5 I was shooting for.  Between incline walking on the treadmill, bike rides (I know, I could fall of…but I’m super careful!), neighborhood walks with the pup and yoga, my body stays in motion.

Yoga is now hard though.  The 60 minutes seems to drag on as I fight through triangle pose and airplane. Child’s pose is even uncomfortable.  However, after class is the best feeling- I feel relaxed and stretched out, so I’m determined to stick with it.

I’m staying active around the house, too.  Laundry (which is becoming more difficult thanks to leaning over into the washing machine) and cooking keep me busy, and I’m still cutting the grass, too! 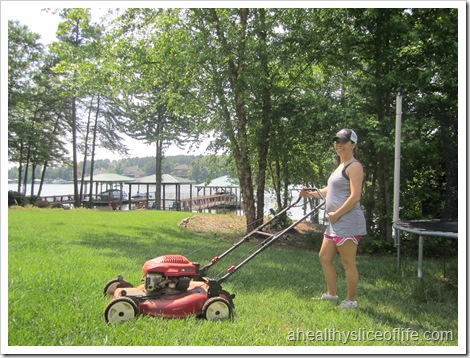 I had my 24 week appointment Tuesday and I’m measuring right on schedule!  here’s some stats from the doc:

Stretch marks: None so far! I’m doing my best to stay hydrated inside and out

Movement: My favorite part! I felt kicks above my belly button for the first time, and in the evenings, I swear Baby D does boot camp.  S/he goes nuts! (as I’ve shared probably too often on twitter).

On the to do list: Nursery stuff! Hopefully an update or two on nursery progress will be posted in the next update.  Right now the ‘nursery’ is still holding all of Hubbs’ beer brewing supplies…