Thank you all for your comments yesterday! They really helped me chill out about having ‘topics’ to post about and to just enjoy the process. Y’all are the best!

And now we are here on day 10 of the paleo challenge (also known as my amazing husband’s birthday!!). The ten days might have gone by in a blink to you, but not so much for us. I’ve been trying to think of a smooth way to report our thoughts and feelings over the challenge and concluded the simplest way is to go with a pro/con list. 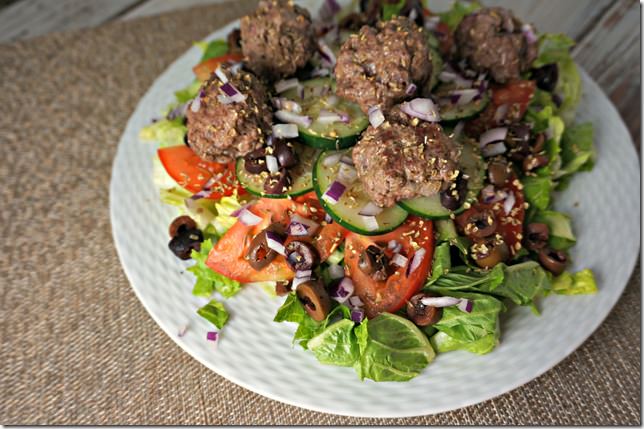 Let’s start with the PROS we found to eating paleo style over the past 10 days.

1. Energy is high and stable (for me). I can notice a distinct different in my energy levels when eating this way. I don’t get the 2pm crash and I feel incredibly perky all morning long (which is saying a lot when you’re spending your day with little ones). 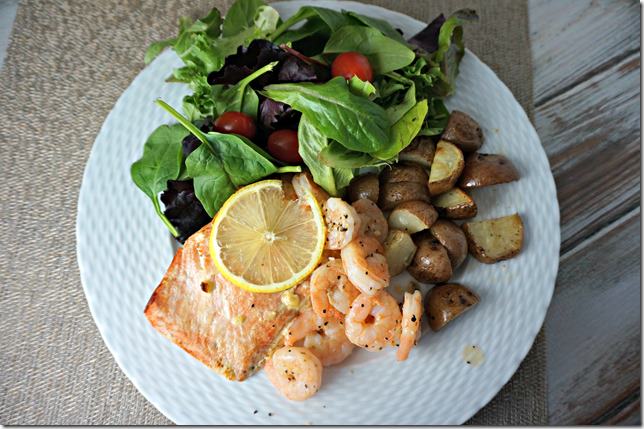 2. The focus on real foods. I love the foods included on the paleo diet. Lots of vegetables, fruits, meat, healthy fats like olives, almonds and avocados. My body responds well to these foods and I feel so much healthier/less greasy than when I used to try and do Atkins in college and chow down on hotdogs and pork rinds (ew… I’ve come a long way!) 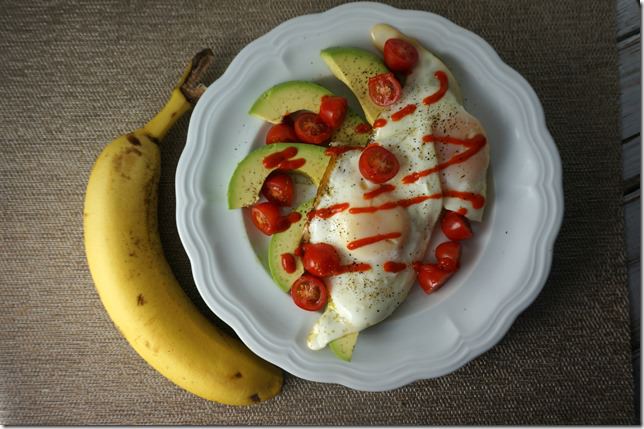 Over Medium Eggs with Avocado, Tomatoes, Sriracha and a Banana

3. David felt caffeine hit him harder and started liking black coffee. I got a great recommendation from you about coconut milk as creamer, but I didn’t have it originally so David drank his coffee black. He said he was surprised that he’s starting to like it that way and thinks he’ll stick with it over cream and sugar. 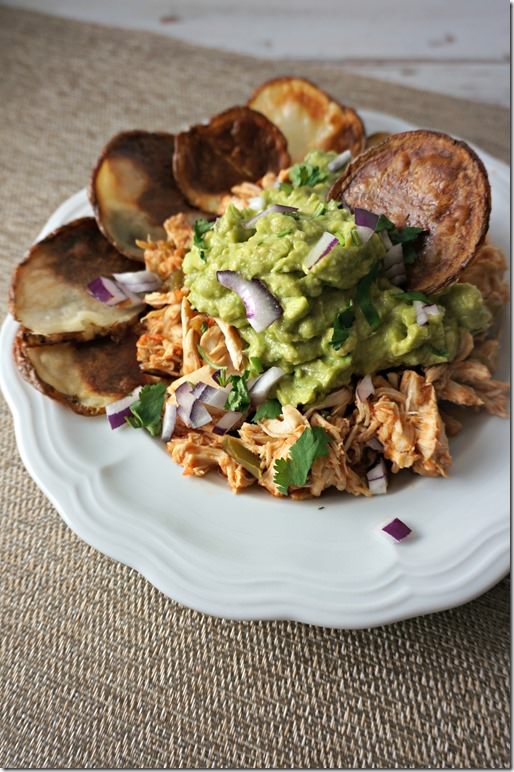 4. No bloated feeling. This was one of my favorite perks! It was crazy and wonderful to feel the same in the evening as I did in the morning. My abs/core just felt “tighter” for a lack of better explanation. I didn’t have any digestive issues and my middle just felt less flabby. I’m not doing the best job of explaining it, but it felt good!

And that sums up the pros. There are some great ones in there, but now to keep it honest, the CONS (to us).

1. Trouble feeling satisfied. David and I both had this odd sensation of being full but still hungry. Yes, it makes no sense, so the best way I can think to explain it is the meals left us unsatisfied, even if we liked the food and felt physically full. I feel over time that this dissipated for me, but it didn’t for David. Instead of that ‘mmhmm, that was good’ feeling of satisfaction, we’d both kind of just look at each other like “ok… I guess we’re done now.” 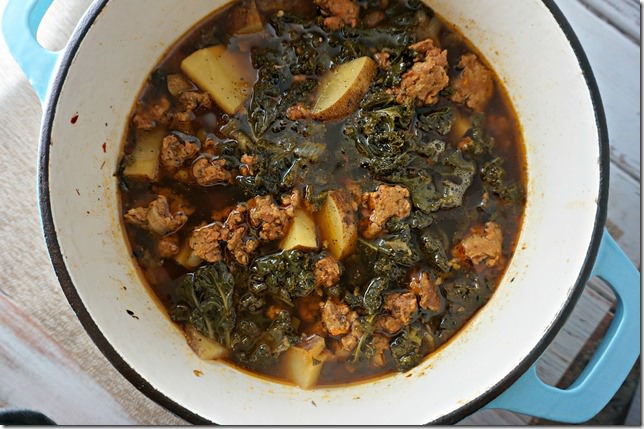 Spicy Sausage, Potato and Kale Soup (minus the cream)

2. Mood changes. David was flat out depressed some days, which is totally unlike him. I called him grumpy on more than one occasion, which I’m sure he loved. He also felt like his brain just wasn’t working as well. I felt like I was more emotional. This totally could have to do with hormones/a busy week/or unrelated, but I felt I was on a bit of a rollercoaster, which is unlike me as well. 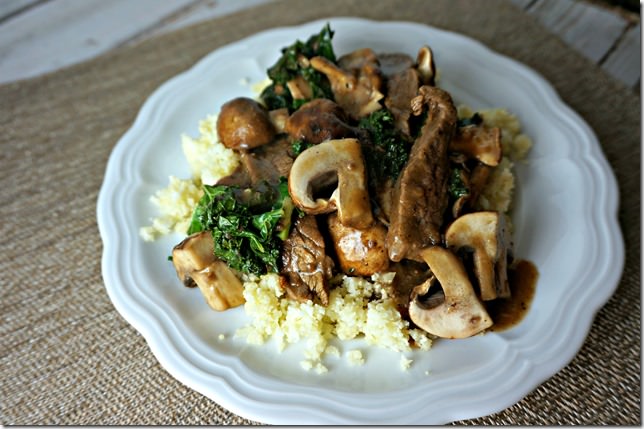 3. It was challenging trying to plan and make meals for everyone. This challenge made me empathetic for people that are new to meal planning. It can feel really overwhelming! Trying to plan meals out of our norm, while also feeding the girls took a lot of effort and a lot of prep work. It definitely took planning ahead and using nap time to do some dinner prep. I’m sure it’s just because it was a new way of eating for us, and perhaps I tried to get too fancy with our meals, but it was a little stressful. 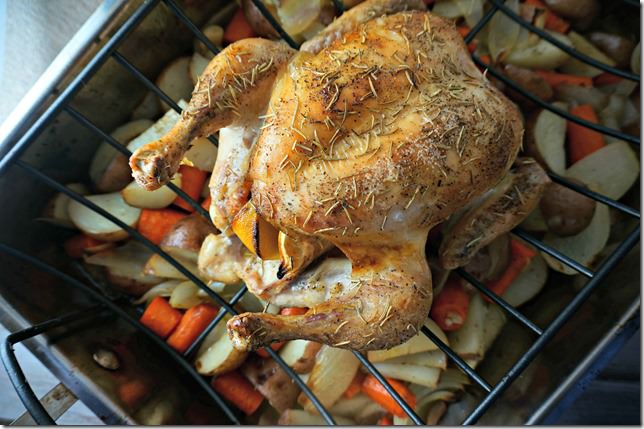 4. It was expensive. I fully admit that it may have been my novice status or my planning of too many fancy meals, but for 10 days of food we spent about $387 dollars. That’s really hard to admit. I will say that that was for all our meals (we didn’t eat out), it fed Hailey and Kaitlyn too (for as much as an 8 month old eats) and I bought mostly organic, but still. Yikes. 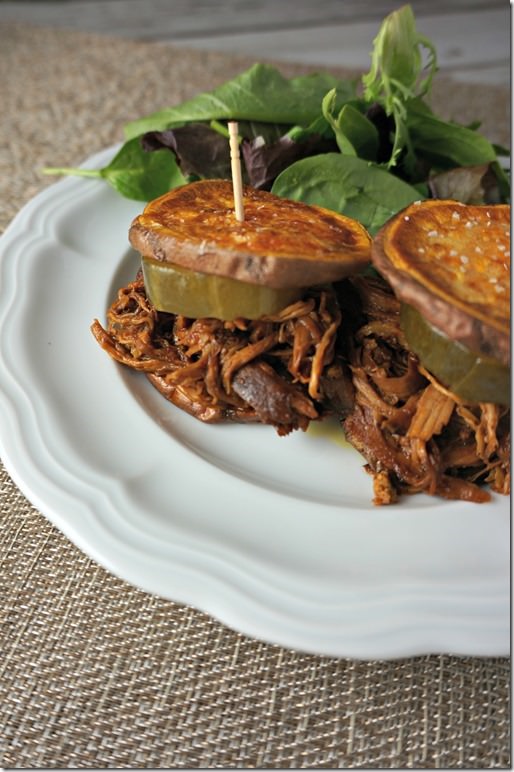 As whiny as I feel I’ve been about some parts of the challenge (wiiiiiiiine, I missed you!!), I’m glad we did it. Sometimes you just need to try things and form your own opinion. While we only did it for 10 days (mad props to you Whole30ers out there), I feel like I got a pretty good overall sense of the style of eating and can totally see how it works well for some people. I think paleo can be a great, healthy way to eat, but (no shocker here), it’s not the right fit for us long term simply because of the mental state of deprivation it caused. I think I will continue to eat paleo-ish about 80% of the time, which was pretty much what I was doing before, but will welcome feta cheese, Friday night pizza, spontaneous meals out with friends and wine back into my life with open arms.

Also, I would be remiss not to answer the question I’ve received a few times over the challenge- did we lose weight? Yes. I lost 2 pounds (with no negative effect to my milk supply) and David lost 4.5 pounds. Water weight? Maybe, but we both did lose, so that was interesting!

Now to decide what the reenter the norm with… a glass of wine or a slice key lime pie for David’s birthday?!