The Whole7 is a shortened version of the Whole30. It follows the same guidelines and can be used to reset sugar cravings, reduce that bloated feeling before a big event, or to just keep healthy habits in solid place (all according to the official Whole30 website). Today I’m sharing my experience with it and my Whole7 meal plan.

While driving home from Disney, David and I sipped kombucha and talked about a budgetary and dietary detox. I’m typically not one for extremes but after an extended period of eating foods we aren’t used to and spending amounts of money that though we planned for still seemed excessive, we decided to take action. Action one: redo a budget. You know, the every dollar has a name method. Luckily a 12 hour drive home from Miami gave us plenty of time to tackle that. Action two: completing a dietary boot camp.

I always feel better when I eat loosely modeled after a paleo style. My typical eats are paleo with some whole grains, dairy, and wine. Since I don’t think I’d ever have a strong enough desire to complete the Whole30, the eating guidelines do intrigue me, so David and I decided to do a Whole7. Honestly, I didn’t think it was a real thing, but apparently I’m not the first to just go with it. Read more on doing a mini Whole30 here. 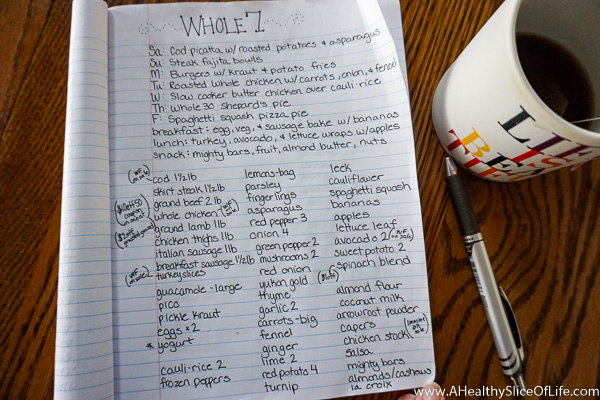 Knowing that eating this way is typically more expensive (quality meats and produce will crank that bill pretty high!), I tried to take note of items that were on sale and had coupons on the Whole Foods app. 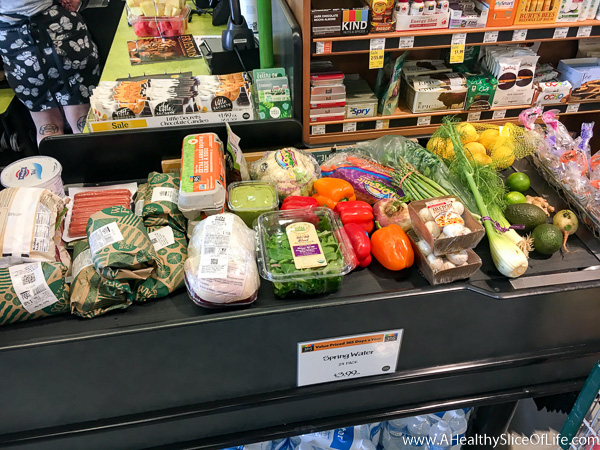 I also had to snag a few products that weren’t in my pantry, like arrowroot powder and almond flour, which raised the overall cost too. Still, I was excited for a week full of super clean eats.

I’m going to run through our meals, then discuss changes we saw, challenges we encountered, and overall thoughts.

Feedback: I was impressed by the almond flour coating and since I love capers, I thought it was delicious! 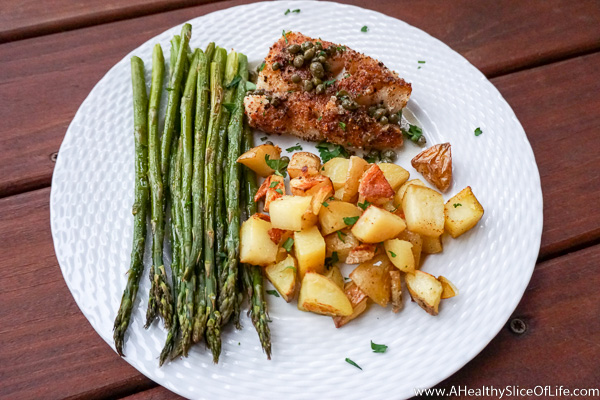 Feedback: I intended to serve it over cauliflower rice, but since they were out in the frozen section and I was too lazy to make my own, I just roasted it, which turned out to work just fine. 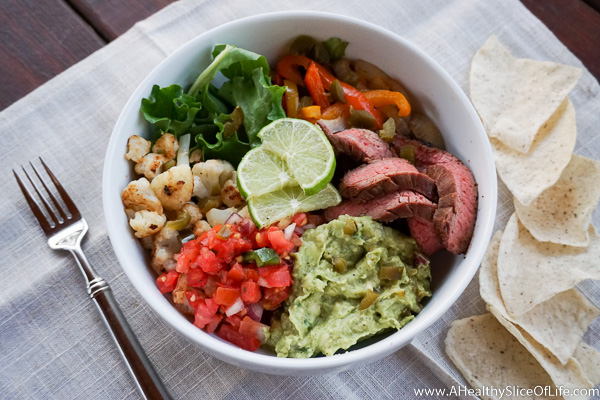 Feedback: I could eat this any day. Farmhouse Culture’s Garlic Dill Pickle kraut offers a nice kick to liven up the entire meal. 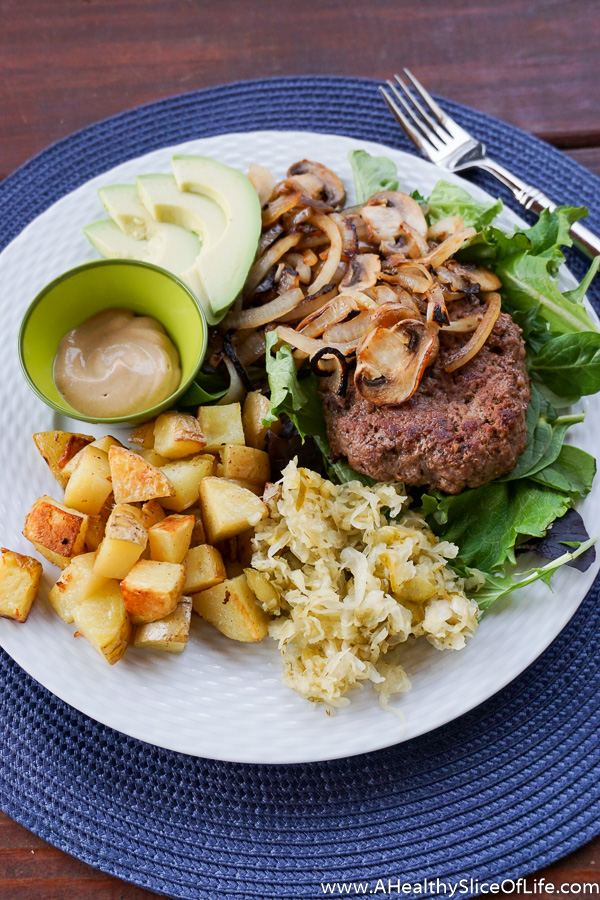 Feedback: I should have added potatoes too. It just wasn’t satisfying enough on its own.

Feedback: Super easy and tasty. I appreciated the more complex flavor that came from the spices, including garam masala, turmeric, coriander, and more. 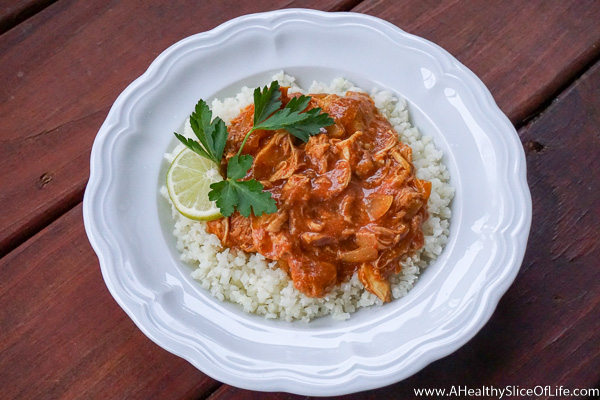 Feedback: One of my favorites! I’m not usually a Shepherd’s Pie kind of girl, but this dish was hearty and comforting at a time during the Whole7 when some meals left us feeling unsatisfied. I will make again! PS- forgive my horrible photography. 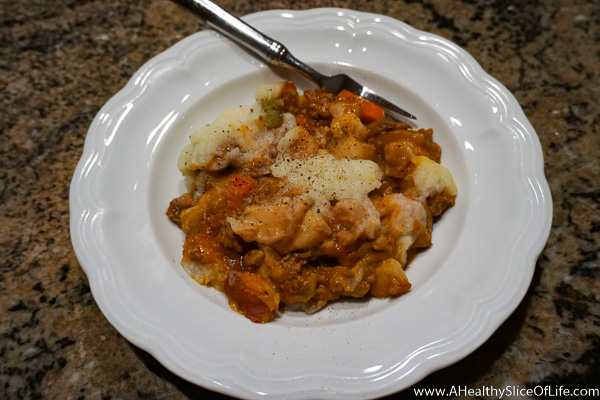 Feedback: I’ve made this 100 times and we always all like it! However, it’s another photography fail. 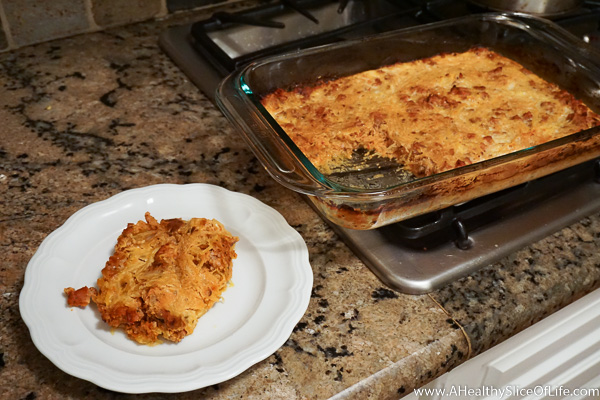 [Tweet “The Whole7 is a shortened version of the Whole30. Get the full week meal plan here! #whole30 #whole7”]

Here are 30 breakfast ideas for doing the Whole30. I opted for a simple egg bake. I made this recipe which was good, except I would add hot sauce next time to give it a little more flavor. 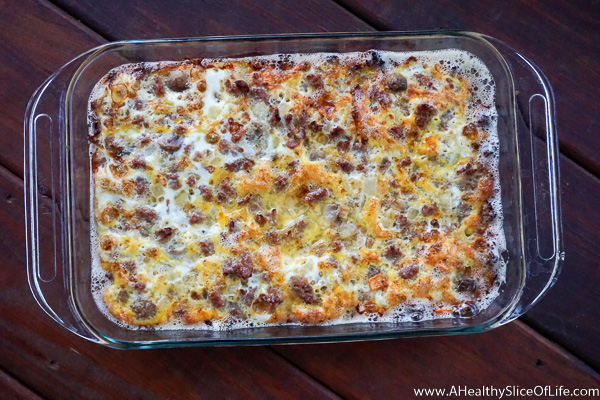 I let it cool and cut it into squares. David would eat 2 squares and a banana on his way out the door while I dressed mine up a bit more. 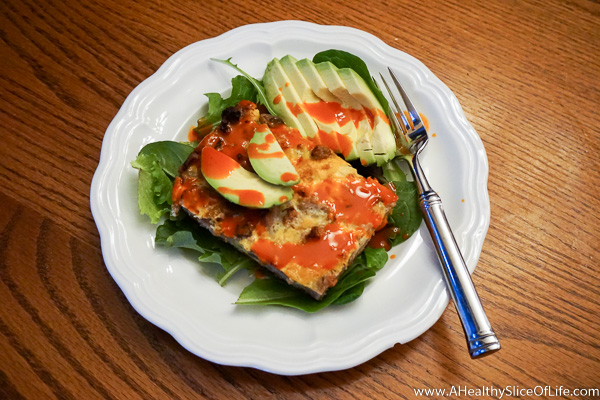 I found out quickly I needed to eat a lot more to stay feeling full. I tried two different paleo wraps (more on whether this is “allowed” in my afterthoughts). Julian Bakery (found at Whole Foods) and Siete Foods (found in the freezer section at Whole Foods). 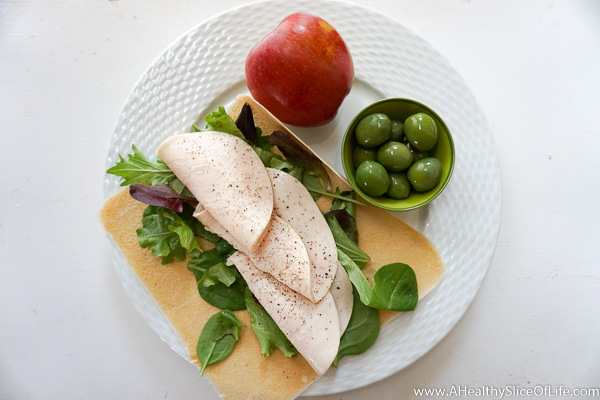 Above: Julian Bakery paleo wrap and below is Siete Foods. 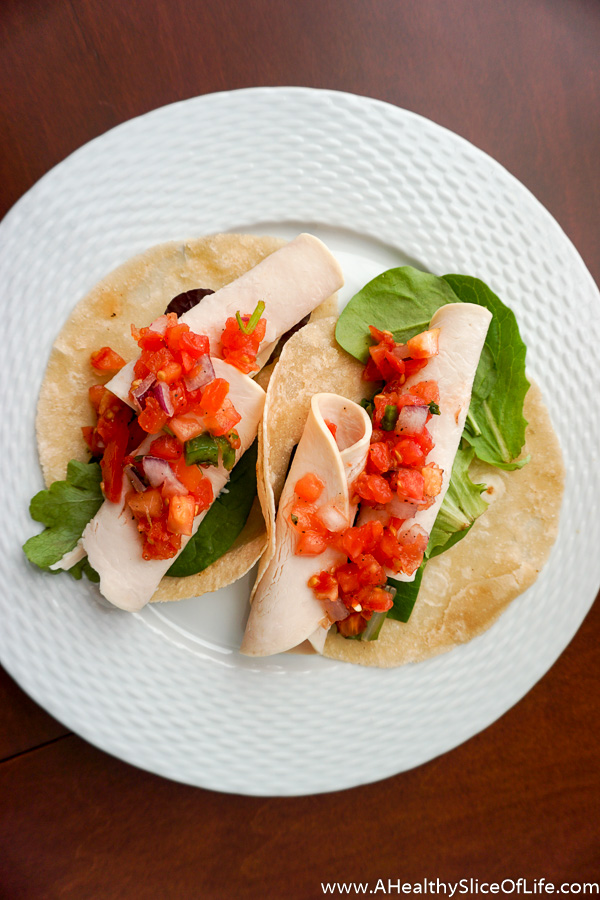 I preferred the Siete Foods, though both made nice options for lunch wraps!

My favorite lunches followed the laws of volumetrics. I liked the large salads like below with a dip side item, like these plantain chips and guacamole. 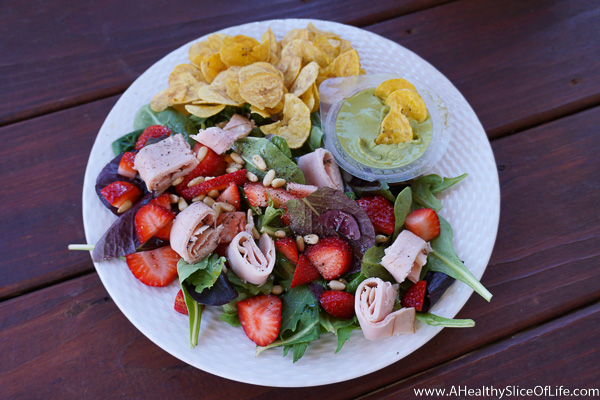 David: Lost 5 pounds in 7 days. Hated almost every minute of it. He felt like he was eating enough to get full but never felt satisfied. He said by a few days in he felt permanently in a mental fog, had low energy, and his crossfit workout sucked.

Brittany: Did not lose a single pound. However, my stomach felt super flat and I had no bloating the entire time (even when monthly hormones came into play). Honestly, I am considering doing this once a month for a week if it can help with my horrific period pain (which it seemed to do, but that’s a post for another day). There were a few times I felt that “full but unsatisfied” feeling which really sucked. Overall though my energy and attitude were good, which I attribute to the fact that my diet leans that way most of the time as is. In fact, if you added in wine and dairy, I’d probably be good to go!

I realize I may get called out for not “doing it right.” Purists say you can not snack or attempt to recreate baked goods/other items, even if all ingredients are compliant. Well, I’m clearly not a purist. The Siete Foods tortilla chips saved our sanity (so good!) and this organic (all ingredient compliant) coffee and almond butter smoothie saved me on a mom and daughter day out at Discovery Place Kids. 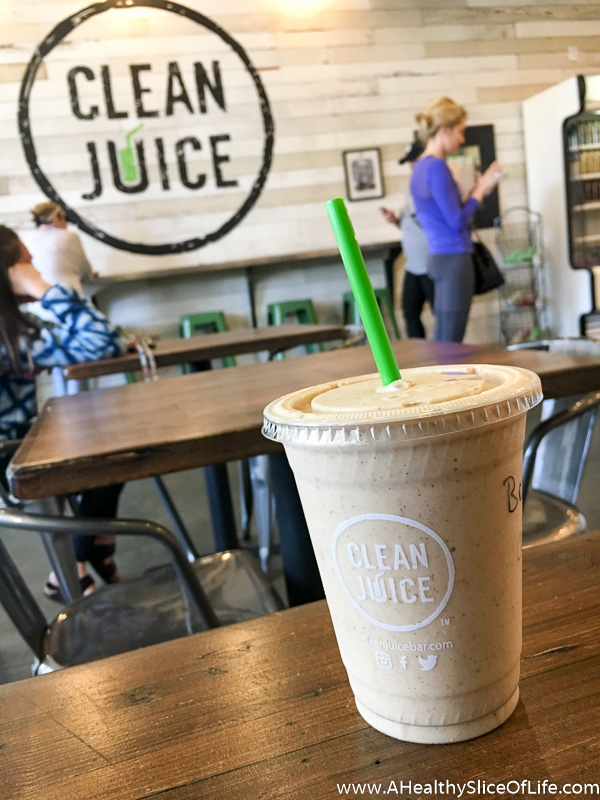 David did have ONE positive thing from this experience- I blended a can or full fat organic coconut milk in the blender, then stored it in the fridge in a mason jar. He stirred it into his coffee every morning and really loved the flavor. It was even better when I blended the coffee with a scoop of coconut milk in the blender. It tastes like a latte! 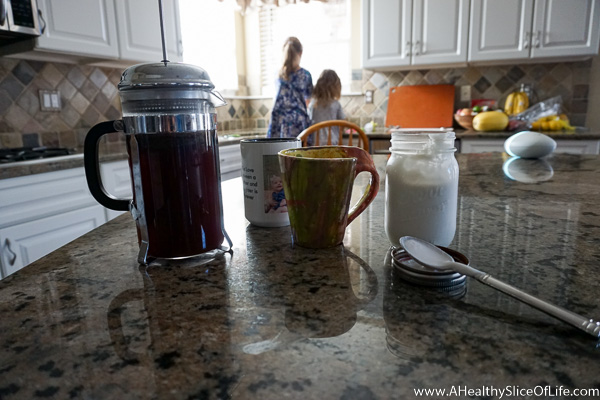 It’s expensive. Between the initial trip to the grocery and subsequent trips to other grocery stores, our weekly total topped $300. That is really hard to admit. I could do it for less by not eating as wide of a variety for meals (we used lamb for the Shepard’s pie and convenience foods like compliant tortillas and chips add up quickly too). I also bought items like arrowroot powder that I should have ordered from Thrive Market (affiliate link!) ahead of time to save money. Lessons learned. 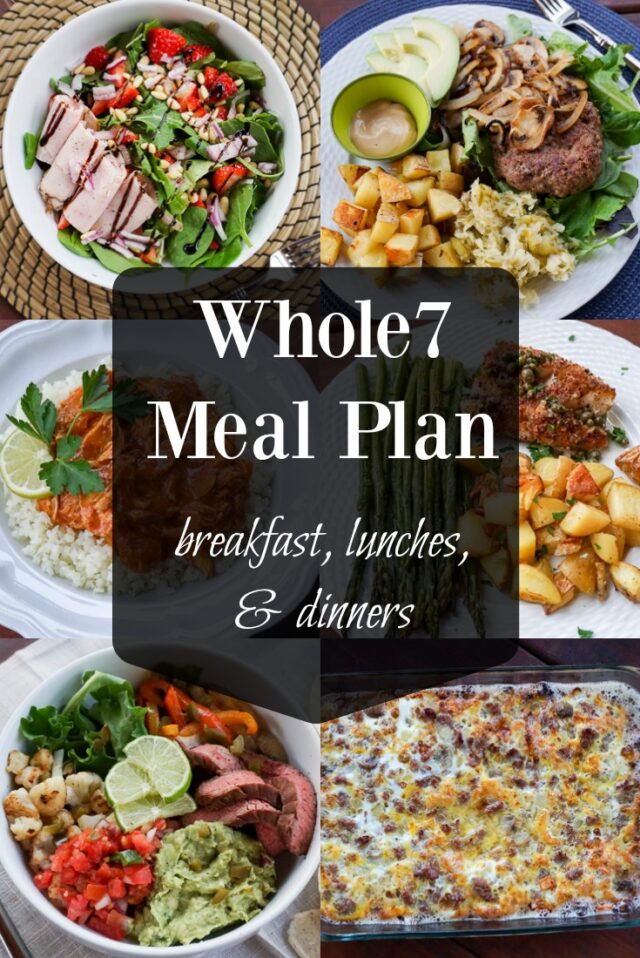 At this point, I don’t think so. While part of me gets giddy at the challenge of it, for me, I prefer not to focus so intently on food. I don’t have any real health concerns (minus beans, which I’ve learned just don’t do that well with my digestion). I think it can have enormous health benefits if it’s a real shake up to a person’s day to day diet, but for me, it felt like a more restrictive version of the way I eat normally. I will admit, I felt great having a flat, non-bloated stomach at all hours of the day, but that doesn’t outweigh the happiness that a glass of wine with my husband on a random Tuesday night brings.

I really did enjoy shaking things up with my meal planning and will definitely be repeating some of these dinners and buying some products I might not have before. Even David is enjoying his new coffee creation, so I always think it’s worth experimenting and trying something new in the culinary department!

Any questions on my experience with the Whole7?