Today is a special day! While those of you remembering it’s David’s birthday are absolutely correct, I was referring to Martin Luther King Jr Day. MLK Day (as it is often referred to) is an American Federal Holiday marking the birthday of Martin Luther King, Jr (which is technically on January 15, but is celebrated the third Monday of January each year).

I feel for the vast majority the man needs no introduction, but for a quick refresher, Martin Luther King Jr was a social activist and Baptist minister who played a key role in the Civil Rights Movement from the mid 1950’s until his assassination in 1968.

I’m not here to preach to you about Martin Luther King Jr, but as I was teaching the girls last week about MLK and the civil rights movement (and blowing their beautiful, innocent minds), I shared with them how their Papa John (my dad) had actually marched with Martin Luther King Jr in Chicago. It’s something I have always known and am proud of, but the story had new life breathed into it when the girls were curious and wanting to know more.

My dad has so many stories to tell, and the story of his time in Chicago as a seminarian volunteer for an outreach program to local gangs is one of the best.

In honor of MLK Day, I wanted to share this article my dad wrote about the transformative power of love that he witnessed first hand through the story of a man named James Hobson. Republished here, with his permission, of course. I hope you find it as inspiring as I do. Take it away, Dad!

Over the years my life has been dedicated to positive change, transformation, once as a priest, in academia, and now as a psychotherapist.  I have had the privilege of working with people committed to growth in themselves and in others. I would like to share one very special experience of transformation with you.

The boy/man is James Hobson – he thinks that might be his name.  He is not sure if that is his real name because he does not know his biological parents; there is no birth certificate.  By the time he was fifteen he had been placed in thirty- two foster homes, attended twenty two schools, and was homeless by the age of fifteen.

James was around twenty when I met him in the west side ghetto of Chicago.  He was the leader of a three thousand member gang named the Vice Lords. He had been arrested sixty six times for gang activity.  He was known as “Caveman”.

I was there as a seminarian volunteer in the Cabrini project begun by Rev. Charles La Verde.  He was concerned about the violence and death present in the community and began this outreach effort to touch and transform their lives.  James came to Cabrini to play pool. He was greeted by a group of caring people who treated him with respect and invited him to look at another way to live.  Over the period of three months James experienced a loving “family” who truly cared about him. He began to change.

An example of  this change was when Dr. Martin Luther King, Jr. came to Chicago to point out the housing discrimination and slum lords victimization of poor people. A massive march of poor people and other well-intentioned people took place. James and I participated. We were arm and arm with each other as bigoted bystanders hurled insults, spit at us, and threw rocks. It was a scary time but we made it to the end point where Dr. King was hit in the head with a rock and went to his knees. I was so proud of James and his ability to stay calm and not angrily engage this ruthless mob. I will always remember that day and our attempt to participate in such a social justice issue.

The impact of the spirit of the Cabrini volunteers opened new doors for James.  He clearly needed to escape his surroundings. Military service was an option. He was rejected by all four branches.  Finally, after many petitions and interventions by significant individuals, James was admitted into the Army. In the course of his military stint he earned two bronze stars, three presidential commendations, and six other medals.  He attained the rank of sergeant.

Upon his return to Chicago, James was given the key to the city by Mayor Daley and a college scholarship.  James wanted to give something back to the community and has for many years worked through the parks and recreation department to reach gang members. He tirelessly reaches out to the estranged impoverished youth, in whom he can readily see himself.  The cover story for the Chicago Tribune’s Sunday magazine carried an eight- page story about James.

A banquet honoring James was held a few years ago in Chicago.  Father LaVerde, was trying to start another Cabrini project in the south side ghetto, hoped that the youth of his  community would listen to someone who had “been there”. (The night before a thirteen-year-old boy was killed near the church for crossing the street into the Latin Kings’ turf.)  This night the community was invited to honor James and to hear him speak. A few of us former volunteers came for a reunion with James and with each other. James told his story.  Tears of joy and love were shed. Embraces filled the room. The evolving story of transformation had been explained. A new man stood on stage, grateful and proud, yet tearful from the emotional damage experienced in his childhood.

James has had a successful career as head of Chicago’s park system. He continues to gain awards for this transformative work in the community, especially with the youth. His rewards include both city of Chicago and the State of Illinois.

I have been blessed to have been a part of this “new beginning” of James.  He occasionally will call me at Christmas to tell me that he loves me and is grateful for what we shared.  He always will be my friend.

There are other James’ out there – people of incredible potential.  May you and I see them, hear them, be with them – love them. New beginnings are possible.  Love transforms.

Last time I was down at Mom and Dad’s house I saw a scribbled note on the counter to my dad from James saying he’d be in town soon and would like to get together if they could. It reminded me of this story and made me want to do my part in continuing to spread the message about the power of connection and love.

I shared this with you today because I’m proud of what my dad was a part of, to share with a piece of my personal and family story, and because I truly do believe that love can transform.

You can check out more of my dad’s articles here.

Thank you, Dad, for letting me share this today! 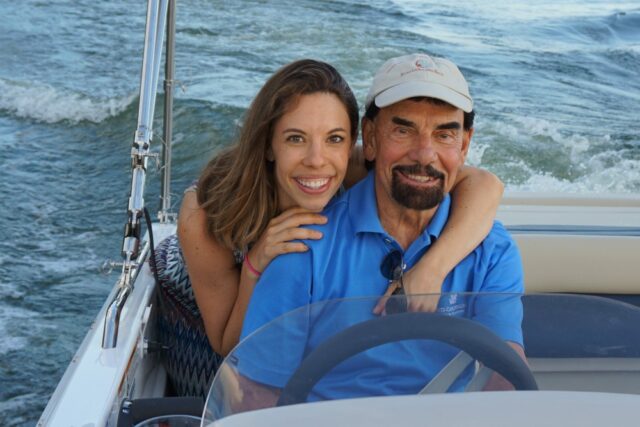