I don’t believe in yelling at my kids. I’m not much of a yeller as is and I don’t think screaming is ever a good way to get a point across. As a mom, I try very hard to lead by example, teach with a kind but firm hand and be create a safe and consistent atmosphere for my kids. Yes, I believe very strongly in all of that, and yet yesterday… sigh, yesterday I lost it y’all.

Upon the girls’ insistence, I agreed to one of those big, bulky kid carts at Whole Foods. They are adorable, but clunky and sort of hellish to push around. Yet, they keep the kids inside. Right? I mean, they have seat belts and steering wheels with beeping horns- what more could a kid want? Apparently to run around like little hooligans, that’s what.

It started with them preferring to get out and walk, which led to 15 boxes of crackers being tossed in my cart in the 10 seconds I took to stop and say hi to a friend. Then they decided climbing on the cart and holding on to the outside while I pushed would be more fun. I wavered back and forth in my head as to whether I should allow it, but while trying to pick my battles, I decided to let it go. I was just making a quick trip after all and if this could buy me 5 more minutes to load up, so be it. 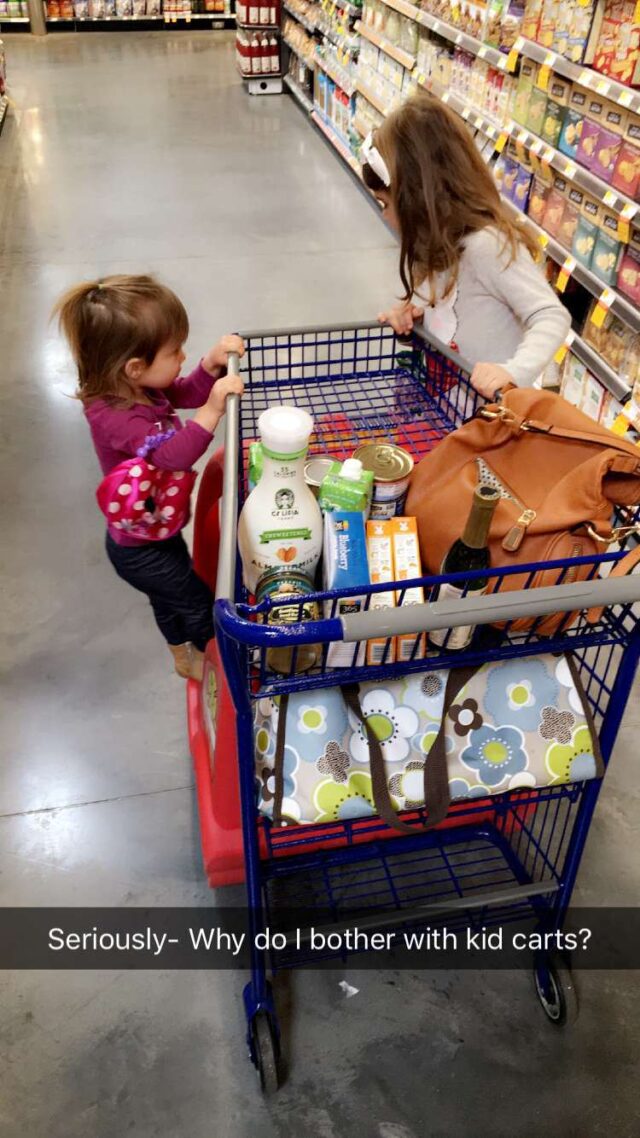 Finally we were heading to the check out line, which happens to be near a display of OPEN CANDY BINS for bulk buying. I love you Whole Foods, but why– whyyyyyyyy do you display candy in the open within grasp of children’s grabby little hands? I did my best to avoid it. We went down a side aisle and headed straight to the checkout line, which unfortunately was a little long at the moment. But like a moth to a flame, before I could park our car cart into checkout #4, Kaitlyn had popped out and was halfway to the candy stand. I get it; she’s not even 2 yet. But then Hailey, my FOUR AND A HALF YEAR OLD, took off and was hot on her heels, giggling like a banshee.

This left me in line, firmly and loudly telling them to get back here now. No dice. When they were out of my view, I had no choice but to abandon my cart and run after them. Kaitlyn had snagged a yogurt-covered pretzel and was halfway through it while Hailey was circling the display trying to decide between chocolate apricots or gummy worms. I snatched Kaitlyn up and grabbed Hailey’s hand. She was in a fit of giggles (irritating me further) and becoming floppier by the second (does anyone else’s kid get floppy??) as I told her to get in the cart and stay there. I held my wiggling toddler under one arm while unloading all the groceries onto the conveyor belt. I looked over and Hailey was out of the cart, messing with all the stuff on the side of the check out line.

I gave her my most stern mom look and hissed in a way that only a mom can do to get. in. the. cart. now. More giggles as she ran off, banging into another shopper’s cart. At this point my eyes were stinging and I’m sure my face was red. Who was this kid?! I could feel people looking and all the assumptions raced through my head. I just knew they all were wondering why I couldn’t control my kids. They undoubtedly were shaking their heads saying that’s what is wrong with kids today. No discipline; no structure.

I paid as fast as I could, apologizing to the clerks and making an awkward joke about how I should have picked up more wine. I just wanted out of there. I wheeled out the oversized beast cart with Hailey whining and trying to escape with half a leg hanging out the side while still having Kaitlyn tucked under my arm.

As I unloaded the groceries into the car, Hailey started screaming and whining about not getting a yogurt covered pretzel like Kaitlyn and how it wasn’t fair. She was climbing over the seats and incessantly whining I want a pretzellllll.. (cry whine)… pretzelllll….

With the three of us inside the car and the doors closed, I lost it. I whipped my head around and screamed at her to buckle up. It was loud. Hailey’s eyes got big. I was so frustrated, embarrassed and at my wits’ end.

I wish I could say that ended Hailey’s meltdown but it just fired her up more.

Disappointed in myself for yelling at her, I switched gears and just resigned myself to silence as Hailey kept yelling at me- bad mom! No ma’am! I will not play with you! Perhaps a little funny sounding in hindsight, but incredibly nerve-grating in the moment.

By the time we got home, the car was silent. Hailey had worn herself out and given up trying to get my attention after I refused to engage with her antics. Kaitlyn was happily turning pages in a book, appearing oblivious. I was drained.

This parenting thing is most humbling and eye opening experience. It will highlight your shortcomings in one second and fill your heart with joy the next. It will have you doubt your decisions and abilities. It will have you question if you’re doing it right.

I continued to mentally beat myself up for not handling the situation in a way I was proud of when I finally stopped. I realized I needed a change in perspective. What would I tell a friend if she came to with this same story? Feeling defeated for losing it and yelling at her kids? I undoubtedly would be a lot kinder and more supportive than I was being to myself. Motherhood is tough and we are often our own worst critics. After quiet time at home for all, Hailey was back to being her sweet self. We had a talk about what happened that ended with hugs. Then we moved on, hopefully both a little wiser, and ready for a fresh start.

My hope is to encourage you today to know you are the best parent possible for your children. Have faith in your decisions and forgive yourself for your mistakes. None of us are perfect, but we get up each day and give it our best. And honestly, showing up consistently, well, that is the best things we can do for our families.

I write more about my firsthand experiences as a mom here.

Have you ever disappointed yourself in the way you handled a situation?

Was it difficult for you to give yourself grace?