Hey yall! Whew, we are back from a whirlwind weekend feeling a little hoarse but with memories that make it worth it. David and I took off in the early morning on Friday, headed for Annapolis, MD. It’s about a 7 hour drive, but this time of year it is beautiful. Driving through the rolling hills of Virginia with the leaves changing and no kids in the car was quite serene, until we hit DC traffic- yikes!

Luckily we just caught a little at the tail end of our journey and made it to our AirBNB rental by 4:00. 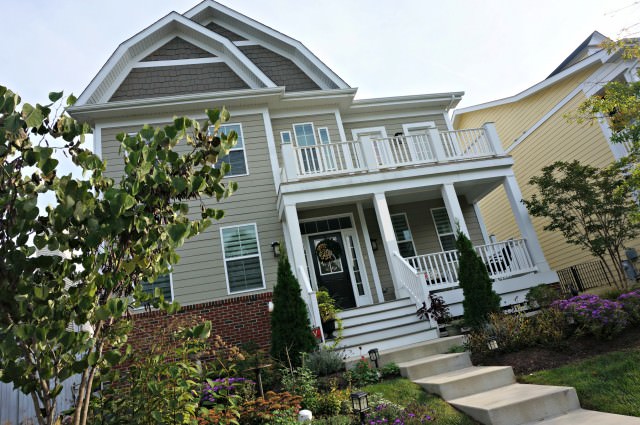 A little side note, this was our first time using AirBNB to book just a room, not an entire house. So yes, basically upstairs this cute home about a mile from the boat show, we rented a bedroom and bathroom that I was pleasantly surprised to find in impeccably clean conditions. For a situation that sounds quite odd on the surface, it worked out brilliantly and I highly recommend it!

We said hello to Tom, the owner’s brother who was meeting us, then dropped our stuff to take off for the show. 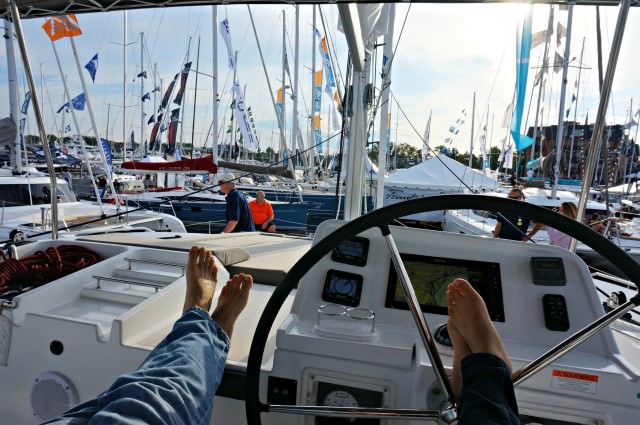 David and I are somewhat sailboat show junkies. This is our third show, after previous taking Hailey in 2012 and 2013. What can I say, we love us some catamarans! 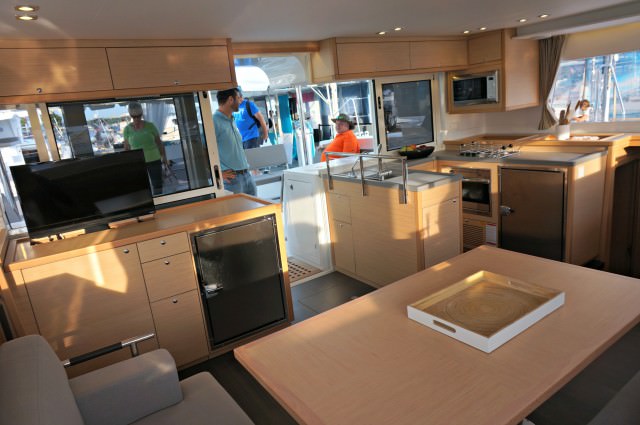 We bounced between boats until the storm clouds rolled in and they booted us off the docks. 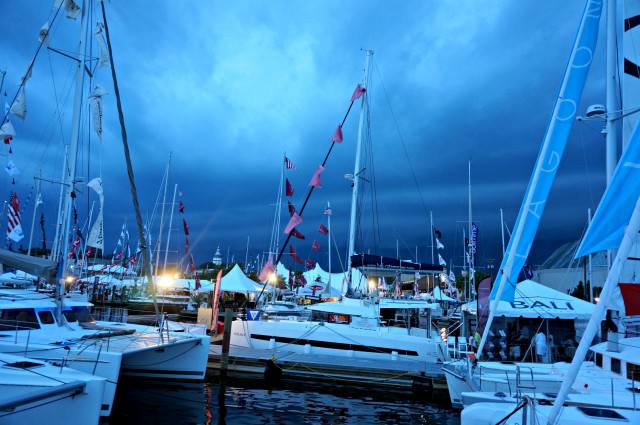 The squall came in quick and fierce, but lightened up soon enough for us to make a run for it to dinner at McGarvey’s in downtown Annapolis. 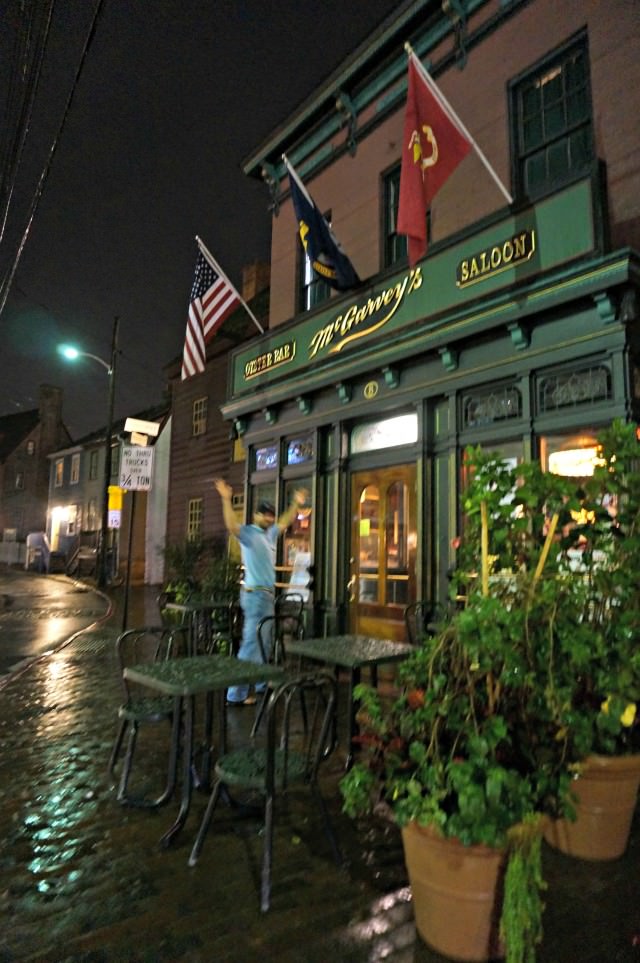 There we proceeded to eat everything in sight, as I was on a personal mission to eat all the seafood I could while we were there for the weekend. 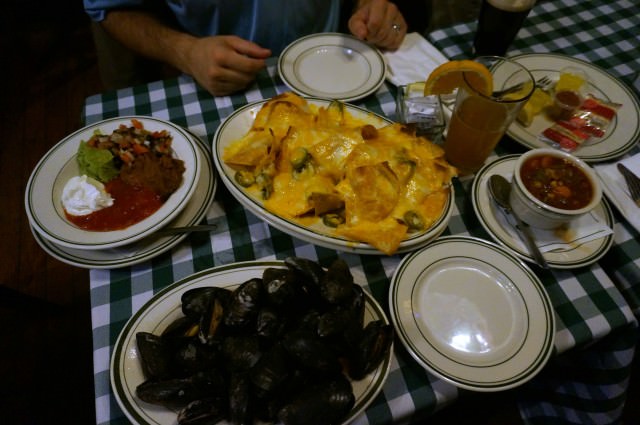 The mussels were large and definitely the hit of this dinner. We finished up and then picked on ourselves a little bit. We were both feeling a little worn down from the hectic week, so we ended up heading home by 9:00. It wasn’t exactly living it up, but we wanted to make sure we had a good night’s sleep before the next day.

It worked! And we both felt ready to go Saturday morning. 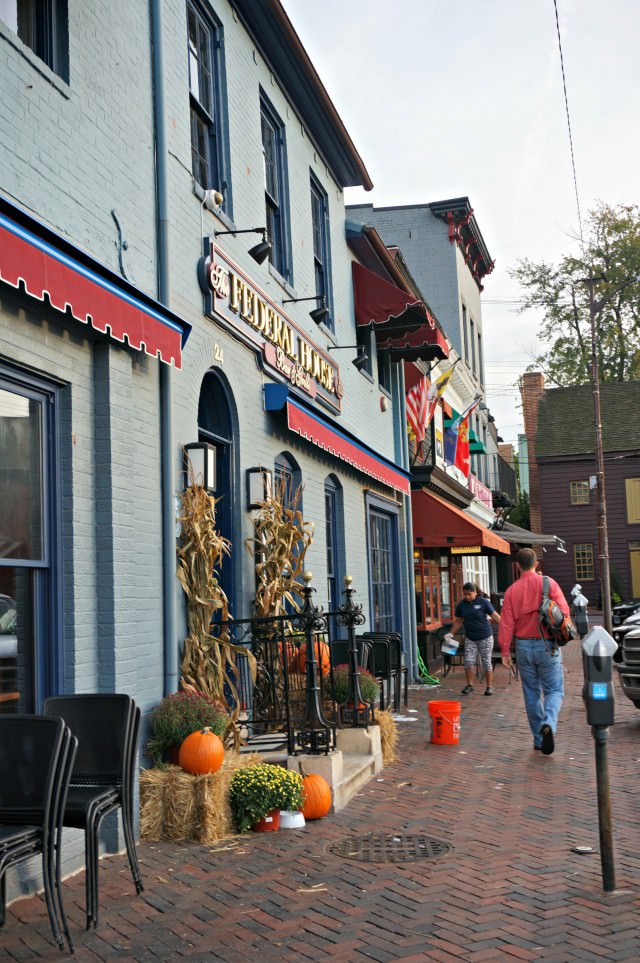 We checked out the highly recommended Iron Rooster for breakfast and it did not disappoint. 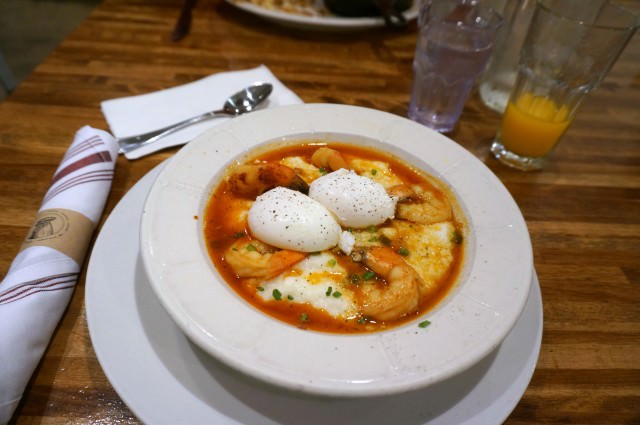 I fell in love with the freshly squeezed orange juice as I devoured my shrimp and grits with poached eggs. All the seafood remember? 😉

By 8:30 we were at the rec center as scheduled. We were stoked for the weekend because we signed up for a full day experience called Take the Wheel. The entire morning was spent in the classroom, where we heard a presentation from Ralph Naranjo. Calling him an experienced sailor would be severely under-crediting him, and we thoroughly enjoyed soaking up as much knowledge from him as possible. 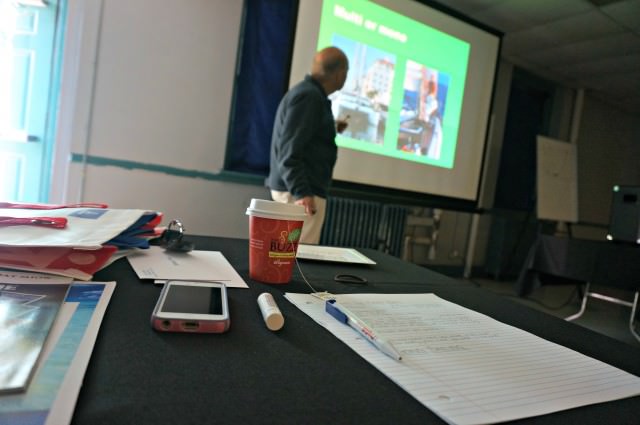 We were dismissed around noon to grab lunch. 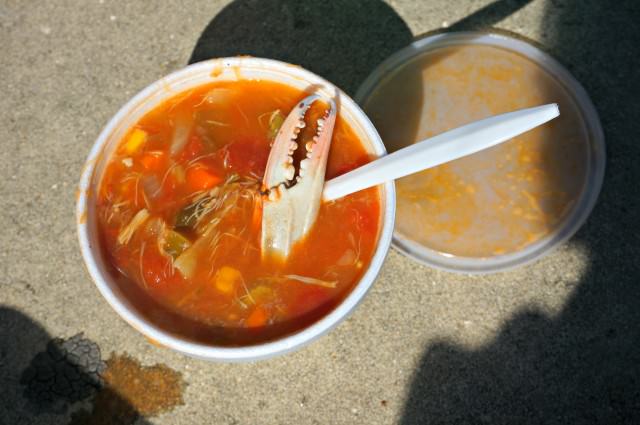 We then had a couple hours to explore before the next part of our course, getting out on some boats! 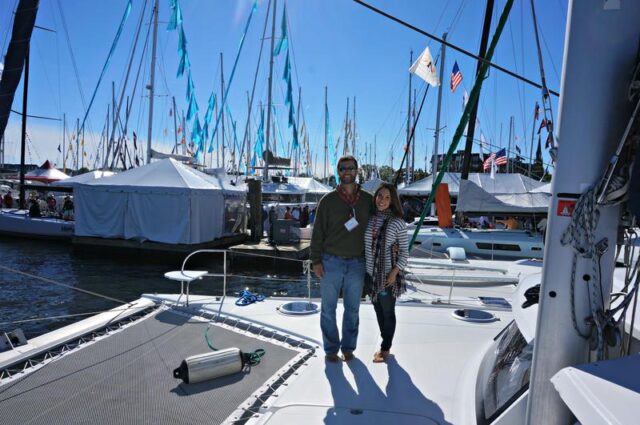 We felt a bit mislead, as we thought we were going to be on the newer versions of the Fountain Pajots, but it didn’t put a damper on our fun. With about 6 aboard the boat, we literally got to take the wheel and sail out into the Chesapeake Bay. 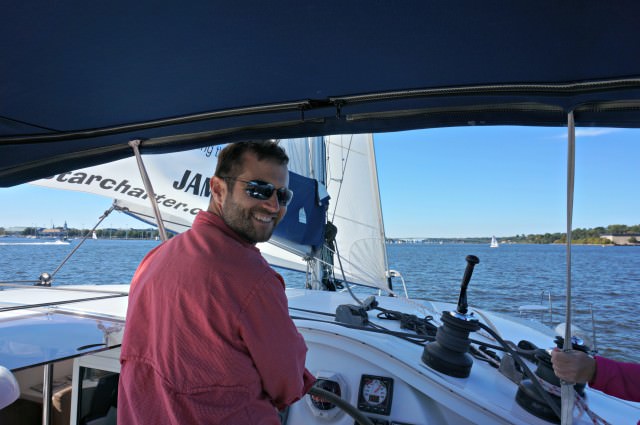 I wish we could have stayed out for hours, but we had a blast spending time on a 44′ and a 40′ catamaran. We got to take control at the helm, practice tacking and handled the lines (which without using the wench made me mentally recommit to bootcamp). Oh yes, and I relaxed a little too.

It was a fabulous afternoon. We were left with about a couple hours of boat show time, so we snagged a couple signature pain killers and returned to a few of our favorites to ask some questions before the sun set. 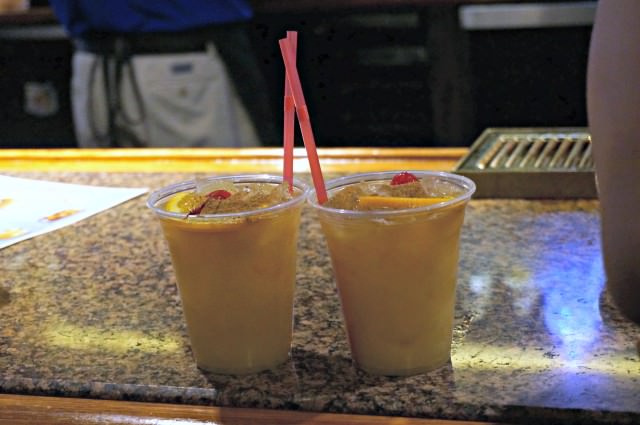 Once the show closed, we took the water taxi over to The Chart House, a nice restaurant on the water. We snagged seats in the lounge area and sipped drinks while I continued my seafood eating mission. 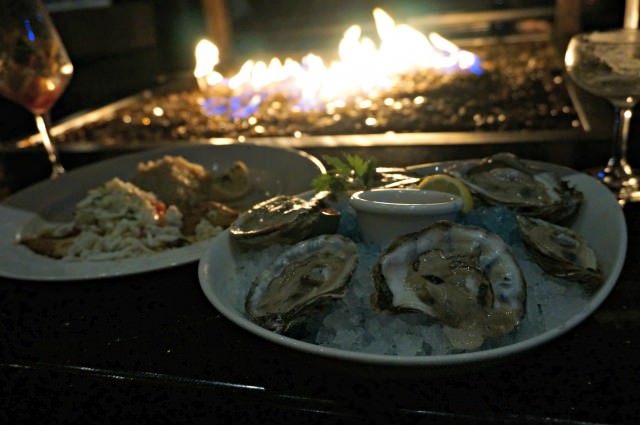 After dinner we wandered the docks, talked to some new boat owners and ended up accidentally making our way into a private club on the water where we chatted until midnight with some locals about raising kids and our love for the water.

The next morning we squeezed in one more indulgent meal, back at the Iron Rooster. 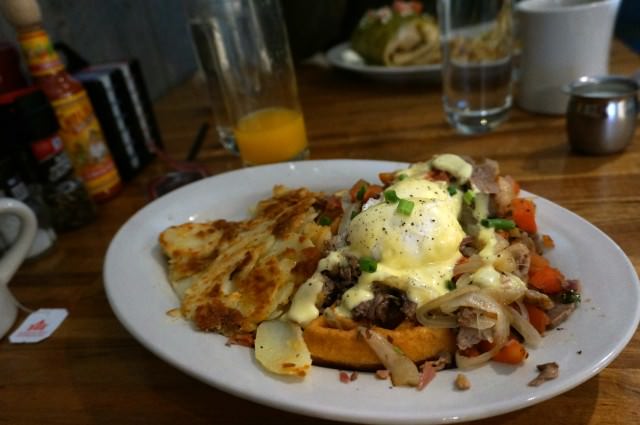 That would be a brisket Benedict over a cornbread and jalapeno waffle. Insert wide-eyed emoji here because WOW.

Then we listened to podcasts for the majority of the ride home where I couldn’t wait to squeeze these three (four)!

I am so SO appreciative of my mom and dad for coming up to stay with the girls. The girls had an absolute blast and Hailey told me all about the pumpkin patch, parks and crafts they did over the weekend. Thank you so much Mom and Dad!!

The weekend was wonderful and exciting and I am feeling refreshed to get back at the grind today.

If you could have a weekend adventure- where would you go?