I’m a fan of the phrase “it gets easier” when it comes to talking to moms with infants and toddlers. Those years are really in the trenches because even they are full of SO many joyful and beautiful moments, they are accompanied by many sleepless nights, blow out diapers, sporadic meltdowns, and other instances that are physically demanding. In that regard, it does get easier! However, whenever I say that, I tend to get push back from moms with older kids saying that they’d love to go back to those early years when the struggles were more simple and contained. I understand that too. I still have young kids myself, ages 6 and 3, so in this brief stage, I have the unique ability to view things on sides of the fence.

Now that Hailey is 6 (and half), things are pretty smooth sailing on the day to day front. She’s a wonderful little person that I can reason with, give direction to, and- oh!- she can use the restroom all by herself. However, I’m seeing the other, more complicated, parenting trials starting to pop up. These challenges are more layered and emotional. Suddenly I’m having to consider things like how to help guide her through moments of hurt, feelings of inadequacy, and other situations that feel too grown up for us to already be flirting with- yet here we are. 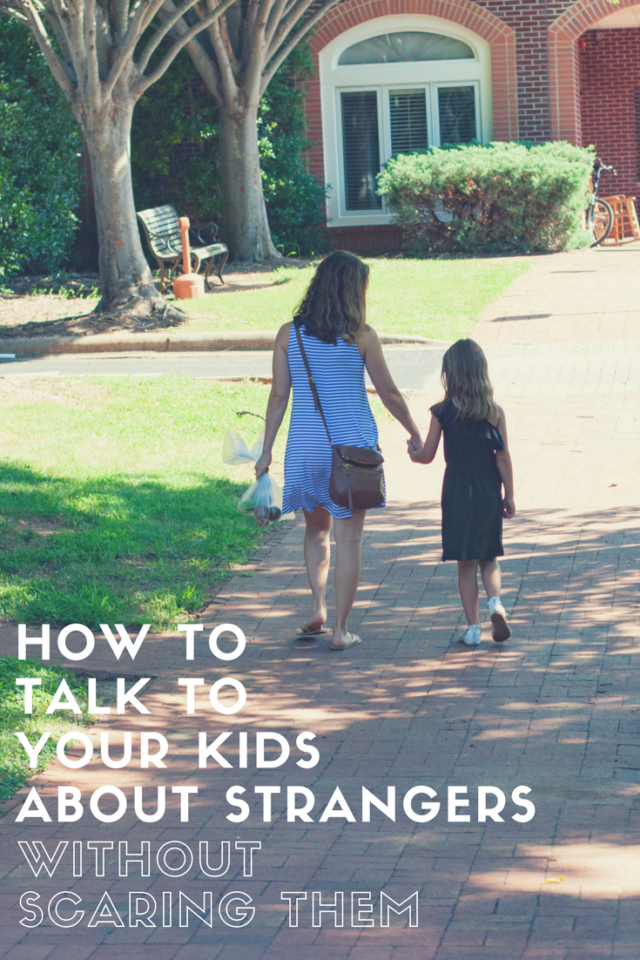 One of those realities I’ve been mulling over lately is how to talk to our girls about interacting with strangers. We are out and about quite often. David and I strongly encourage our children to develop confidence in the world and with people by doing things themselves.  Most of these things I’m able to completely monitor (like when I have Hailey check out at the grocery store by herself), but I know there will be moments down the line when I’m not there to make the call on whether a situation is benign or not. I don’t want them to be afraid of strangers, but of course I don’t want them to blindly trust them either. So what’s a parent to do?

We’ve taken the approach of teaching our children to trust their intuition rather than a blind wariness of all strangers.

We chose to go this route after I considered how I handle stranger situations myself. The majority of the time it’s just good ‘ol neighborly chats and niceties. However, there have been instances of conversations or interactions when things just don’t feel right and when I know I need to get out of the situation quickly. I’m hoping to teach the girls to have the same trust in their gut reaction.

To try and translate the idea of listening to your instincts, we’ve dubbed it the “uh-oh” feeling.

I’ve been encouraging her to understand the uh-oh feeling by applying the same concept to different situations. An easy to understand example is when she does something she knows David and I won’t approve of. She is able to grasp that gut reaction of “Uh-oh, I know this isn’t the right thing to do” so we talk about how that is her intuition talking- the uh-oh feeling.

We are going this route because I want her to be able to distinguish between being afraid of all strangers and being wary of strange people or situations. I want her to be comfortable being friendly while also staying aware.

This is important to me because as a friendly person myself who sometimes struggle with people pleasing, I’ve been in uncomfortable situations when I should have said something or left, but didn’t do so because I didn’t want to be rude. Hailey really loves people, all people, but we had a moment once when she whispered in my ear- “that man is scary.” I was immediately tempted to push politeness and say “nooo, I’m sure he’s a very nice man!” But by doing that, I would have been shutting down her intuition. Instead, I just whispered back, “if he makes you feel uncomfortable, you can stand on the other side of me” which honored her “uh-oh” feeling.

Is this foolproof? Nope. But what is? I think the best we can do is try to raise kids that believe in themselves and their gut. Our personal hope is to raise children that are confident and capable, who understand that the world isn’t bubble-wrapped, but that it isn’t an overly scary place, either. <3