A firsthand experience on The Polar Express train ride in Bryson City, North Carolina on an unusually snowy December day. 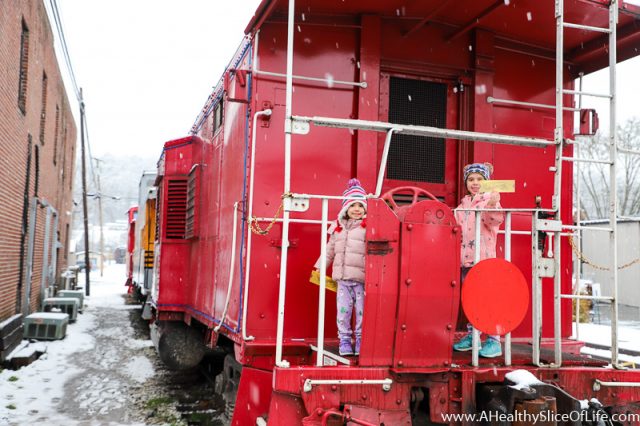 David sometimes picks on me for planning. I can’t help it; getting things on the calendar ahead of time is in my blood. Sometimes it’s silly, I’ll admit, but other times it is essential. For example, I can’t imagine doing Disney again without adequate planning. Still when I came to David in August with the idea to buy tickets for The Polar Express in Bryson City, I definitely got a chuckle in response. However after polling friends on facebook, I decided to move ahead with the plan and was glad I did, as tickets for prime dates were already close to being sold out!

After snagging four tickets, I went about finding accommodations. Bryson City is just over 3 hours from us, but I wanted to make things feel relaxed, so I ended up finding a little 2 bedroom/1 bath cabin outside of town and booked it. This past Thursday, we took off. We arrived just prior to 6:00 PM, picked up a pizza from the adorable downtown area, and made our way to the cabin. Not long after we arrived, we were in pajamas, eating pizza, and taking full advantage of the board game collection. 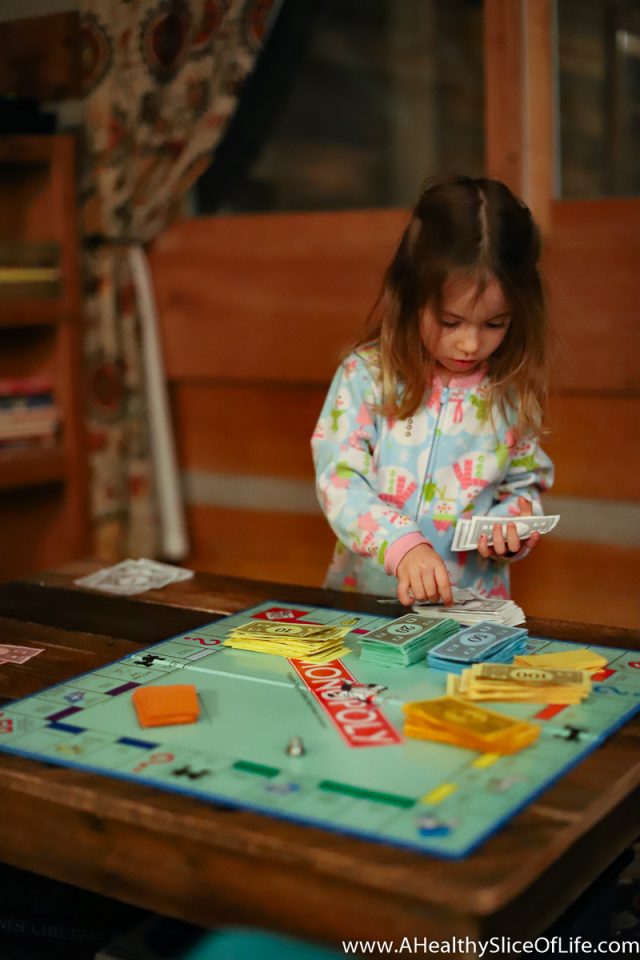 We all crashed hard that night, tired from the travel, so when David woke me up at 7:15 I wasn’t all that thrilled… until I looked outside. SNOW! 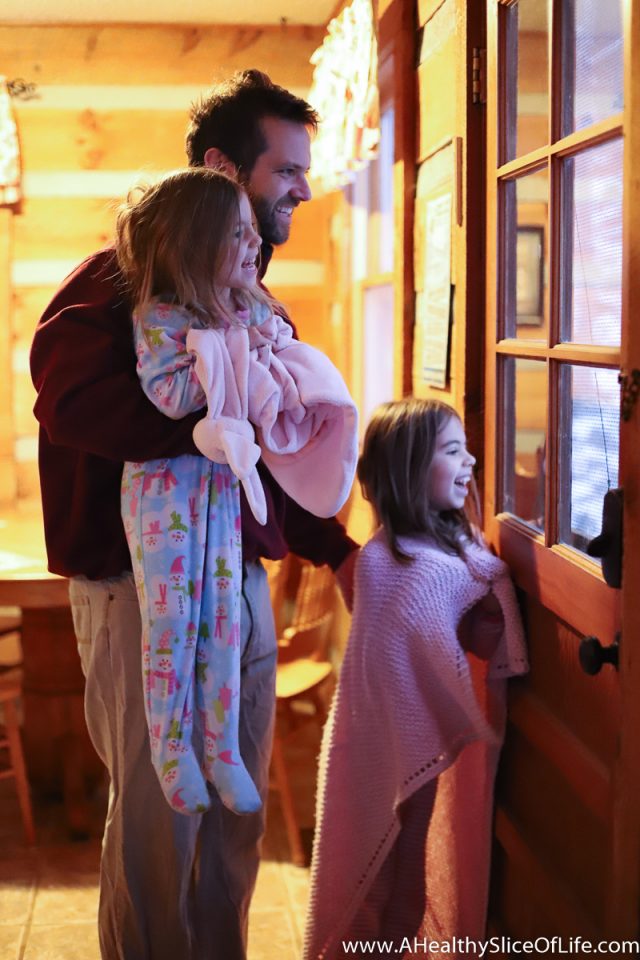 If you hadn’t heard, the south got quite the snow experience this past weekend. The weatherman the night before had predicted it would miss Bryson City, so when we looked out to see a beautiful inch or two, we all were giddy! 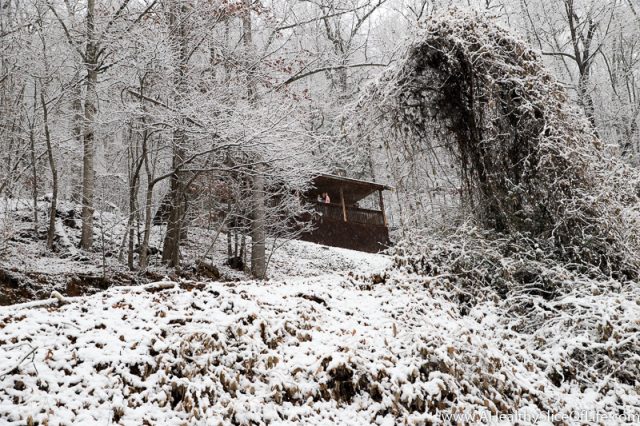 David decided to move the car down to the bottom of the steep driveway, then after breakfast we all went out to explore. 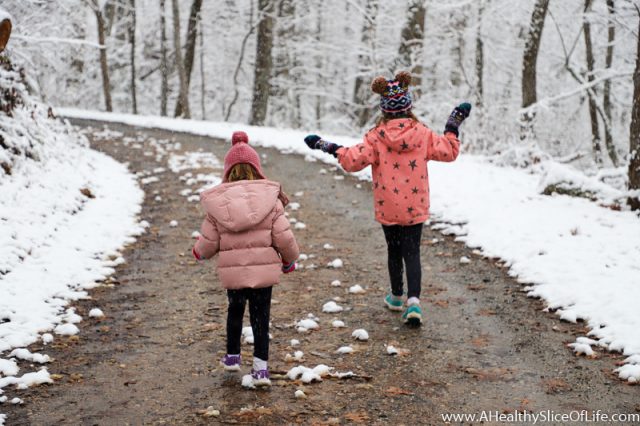 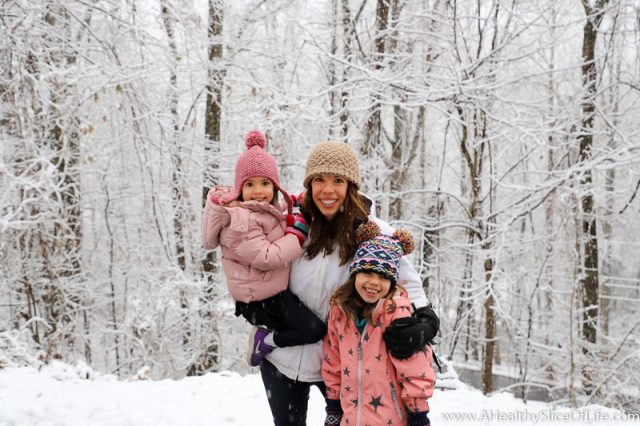 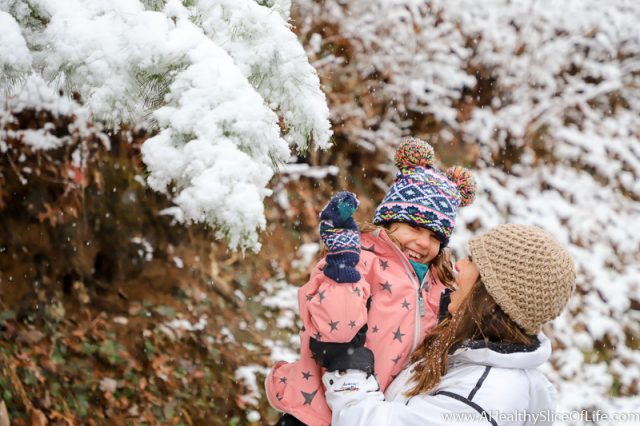 Walking in a winter wonderland was pure magic. I forgot just how quiet things are with snow. We tromped around for 30 minutes or so until it was evident why the girls are both asking Santa for waterproof mittens. Poor things had frozen little hands! 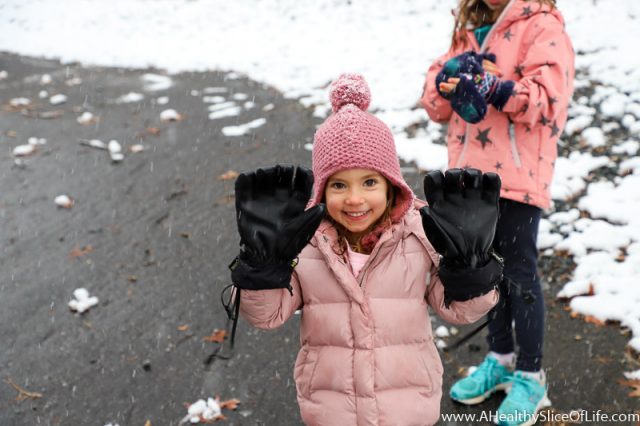 It had started snowing again at that point, so we went back to the cabin for a fire, some magazine reading, and playing with the plethora of ladybugs that inhabited the cabin. Proof that our children need a pet can be found in the fact that they spent hours making homes for the these little ladybugs, some that were more lively than others. Bless their hearts. 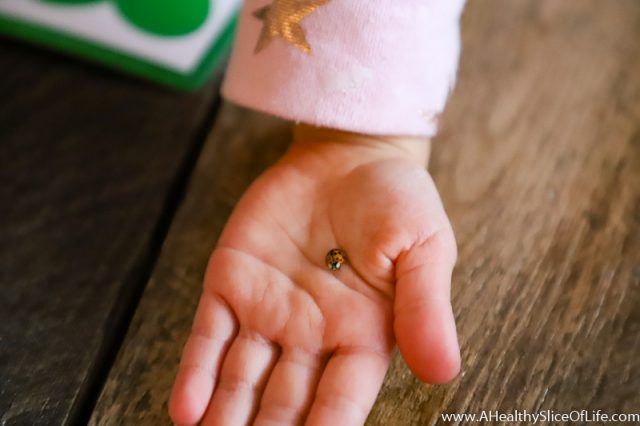 Meanwhile outside, the snow kept falling. In fact, it came down harder and harder as the day went on and I began to worry if we’d be able to make it into town. David worried if we made it to town if we’d be able to make it back, so around noon we decided we couldn’t miss the Polar Express, even if we couldn’t make it back to cabin, so we packed up the car with all our things (just in case) and headed the 20 minutes into town. 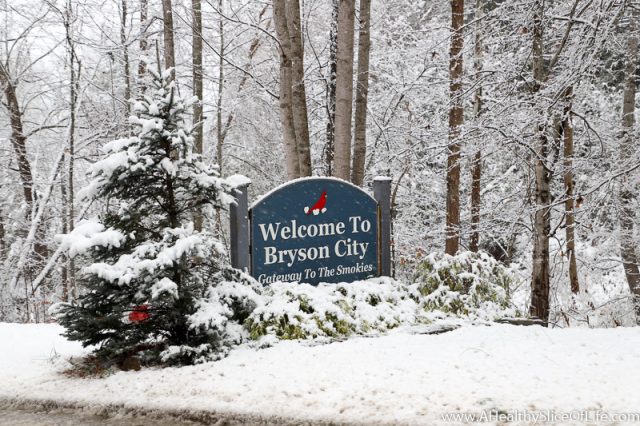 The snow was thick and because of it, the town was nearly empty. If it hadn’t been so beautiful, it would have been eerie. Cork and Bean (a highly recommended restaurant) wasn’t open yet, so after poking around a few places, we decided on Anthony’s, an Italian spot right across from the tracks with large windows and a cozy atmosphere. 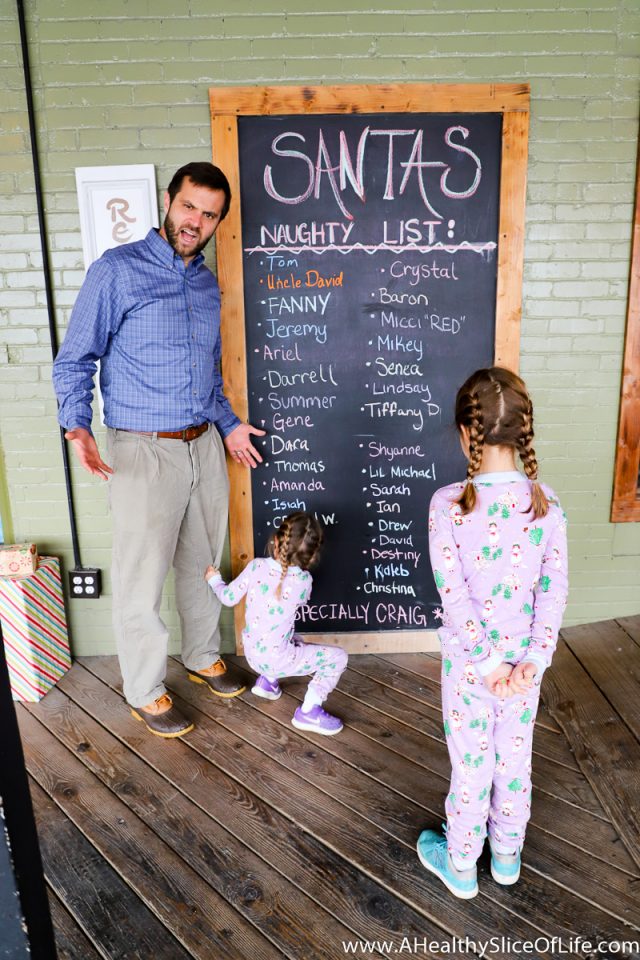 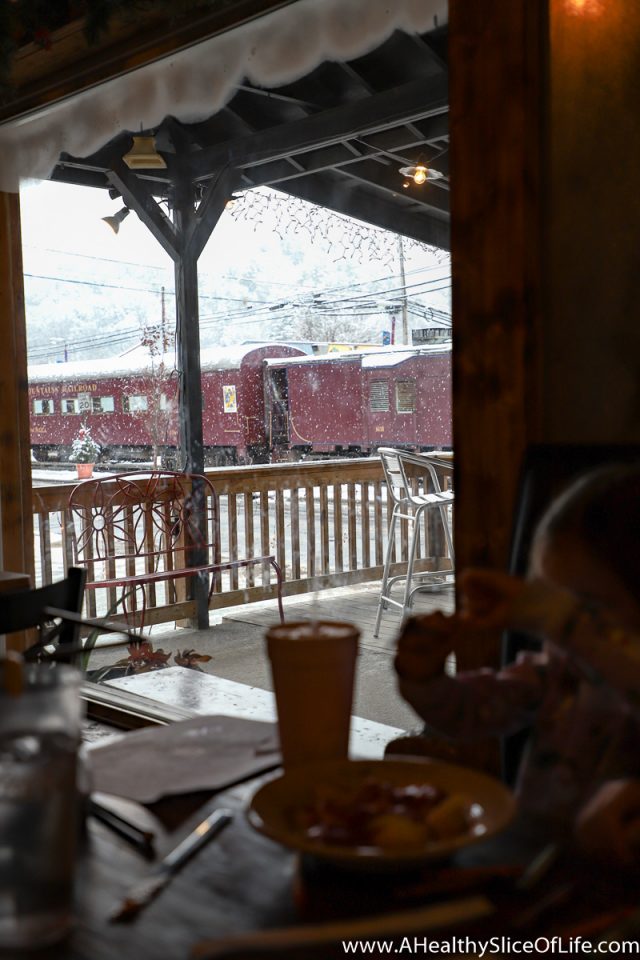 The restaurant only had two employees that showed up to work, but our experience was still quite nice. The girls had lemonade and ravioli, while I had a Bloody Mary and a spaghetti bowl. David had a Manhattan and I’d recommend getting a cocktail if that’s your thing because they were great! We spent about two hours here, watching the snow fall, chatting with the other couple families that wandered in, and watching the pajama-clad kids chase each other in circles. 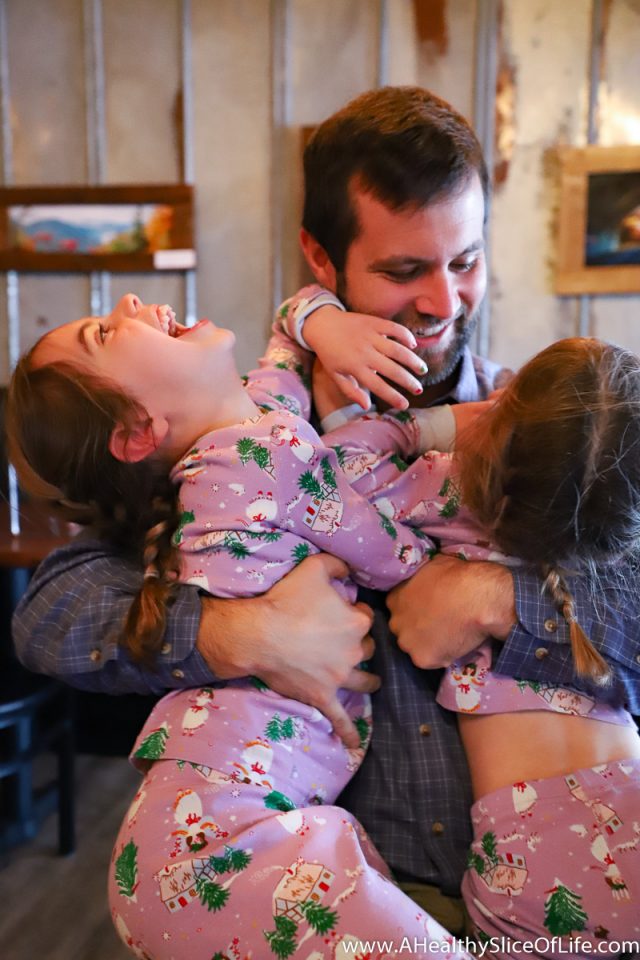 At 4:00 PM, we walked across the street to pick up our tickets. Again, no lines and hardly any people. Bizarre and awesome. 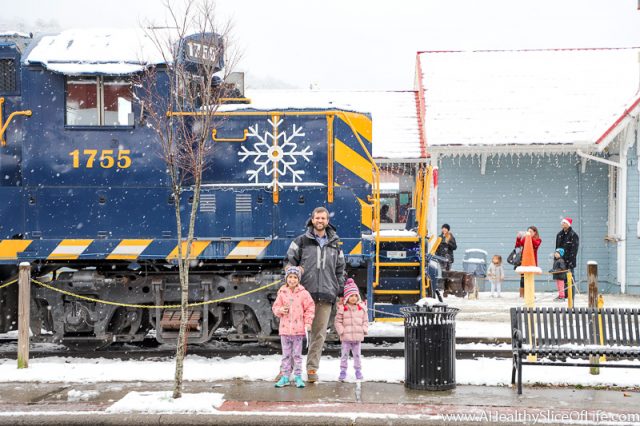 The girls were in awe of the train and Hailey kept asking if we really were going to go to the North Pole. My answer of “I guess we will see; I’ve never been on the Polar Express either!” seemed to satisfy her and the excitement built. 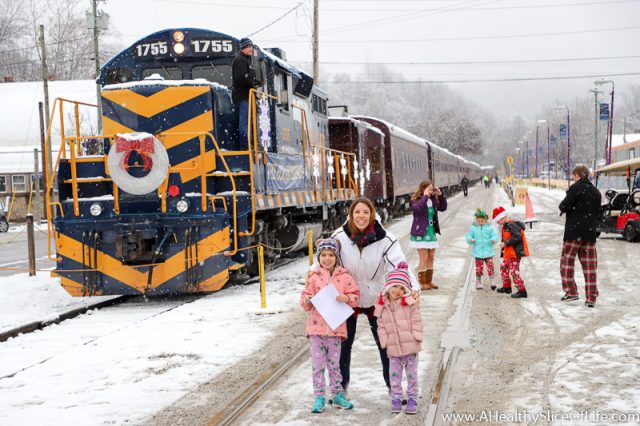 We wandered a bit, took pictures with their official golden tickets, and made a brief stop by the train museum before lining up at 4:40 to board The Polar Express!

One tip I had been given multiple times was to splurge for first class tickets. I can’t compare our seats to the others, but first class ended up being pretty fantastic. The car felt spacious and we had our own assigned table of four that was set up with bags of snacks upon our arrival. 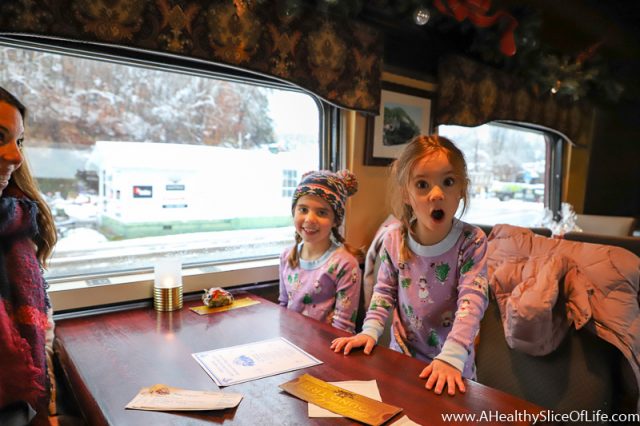 The large windows made it easy to see the snow-covered scenery and we all were very comfortable. I will say that the car stayed a bit cold though! 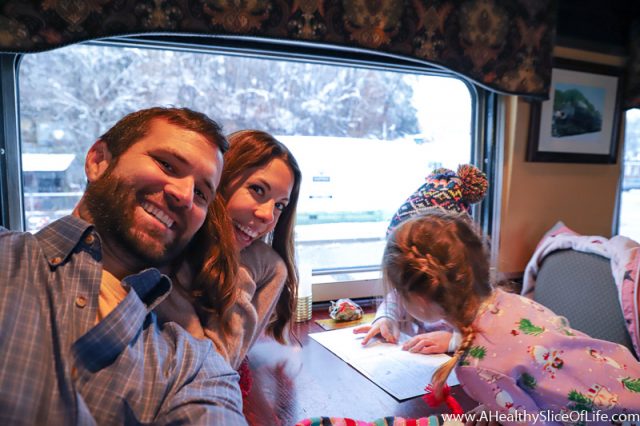 At 5:00 PM the train took off! Originally I had tried for the later 6:35 PM train, but ended up with the 5:00 PM train due to availability. Now that I’ve been I’d highly encourage you to go for the 5:00 PM train too. For the first 30 minutes (on the way to the North Pole) it was still light out and we were able to see all the beautiful scenery- the Nantahala River, the mountains, everything- and it was gorgeous. 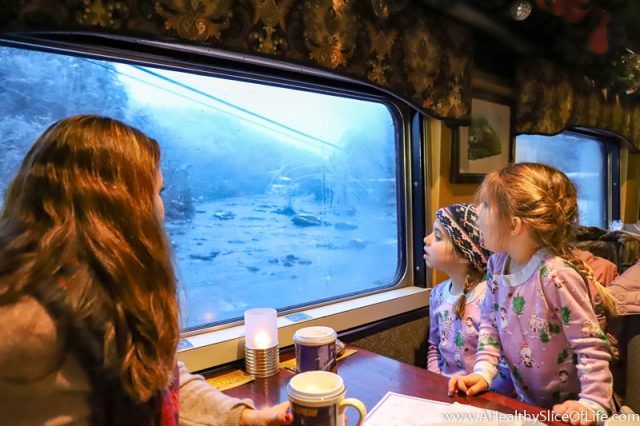 The thing I admired most about the Polar Express train ride was that they didn’t have much downtime, which worked beautifully for children’s short attention spans. Things kicked off, just like movie, with the cooks in the aisles singing the hot chocolate song and handing out (warm) chocolate. 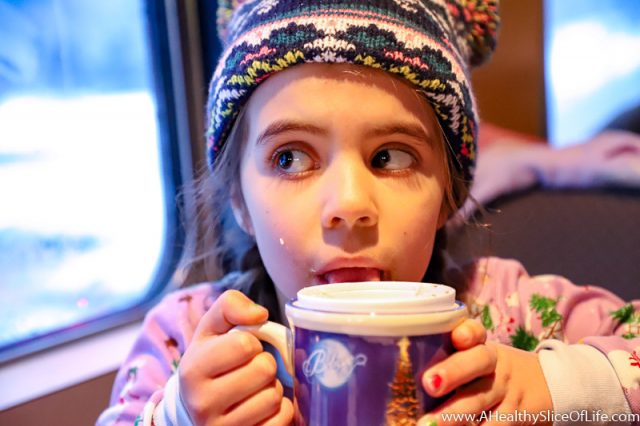 Each car is assigned one “cook” and ours, Sprinkle, had to sing and dance by herself, but she did a wonderful job. After the song and dance came a reading of the Polar Express and sprinkled walked around holding an over-sized book so the kids could help turn pages and follow along. David and I truly were able to kickback and watch everything and enjoy the experience ourselves. 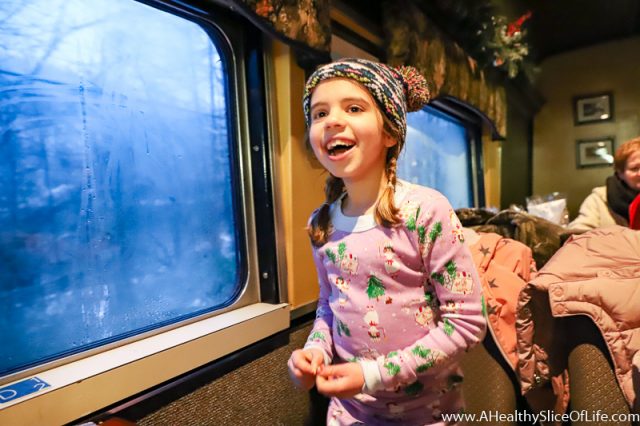 About 30 minutes into the trip, we arrived at The North Pole. They turned off the lights inside the train car and we were able to see the North Pole lit up outside the window. We waved to Santa and his sleigh outside one window, then after a brief stop (that allows Santa to secretly board the train), we slowly rode through the whole North Pole while Sprinkle explained each building (that is Santa’s workshop, that is where Mrs. Clause bakes cookies, and my favorite- that is where all your Elf on the Shelf elves live). 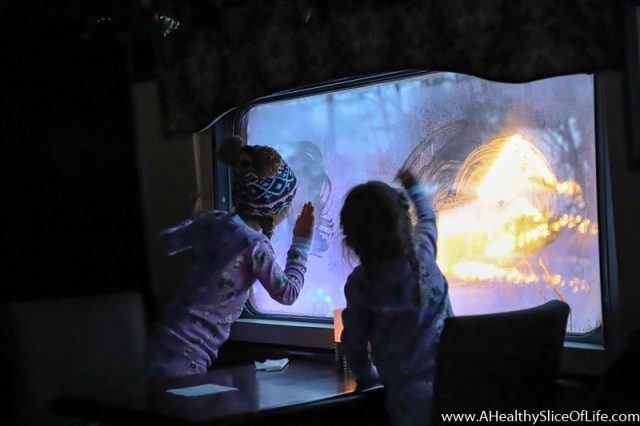 After about 5 or 10 minutes of checking out the North Pole, we headed back to town. The excitement on the way home came in the form of Santa walking through the train, visiting each table, and handing out a bell from his sleigh. 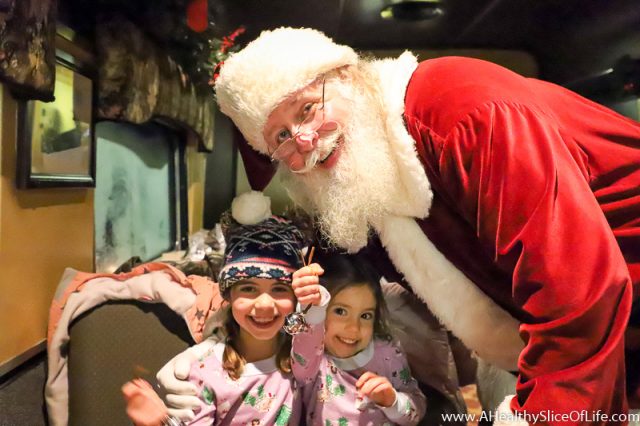 Santa was fantastic, and spent a few minutes talking to the girls while they each proved the could hear the bell ring (you know the importance of this if you’ve seen the movie or read the book).

For the rest of the ride home, there were a couple songs and the girls got to dance in the aisle with Sprinkle, who quickly became Kaitlyn’s favorite person. 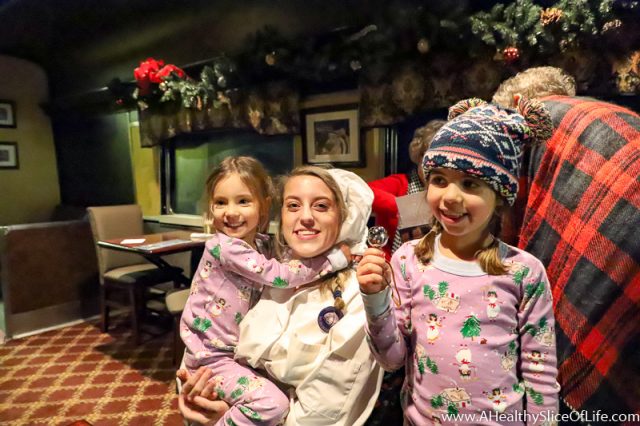 We unloaded back in Bryson City with two happily exhausted girls (and parents). The snow was still coming down but the roads looked more clear and we were able to make it back to our cabin for the night. However, we lost power at about 6:00 AM thanks to the almost FOOT of snow that had accumulated and our authentic log cabin lost heat fast. We quickly packed back up, grabbed breakfast at a diner, and headed back home, driving all the way through a winter wonderland.

The whole experience exceeded my expectations. From the cute little cabin to the snowy town and view from the train. I don’t actually know if we’d ever do it again because I’m not sure we could recreate the magic of this past weekend. After all, people in town said they hadn’t seen snow like that this early in years and years. It felt like we really lucked out!

Have you ever ridden on the Polar Express?

Where did you ride on it?

Thoughts or tips from the experience?