WOWza… I’m just going to put it out there. I ate like my former fat self this weekend… or should I just say… this weekend was a food FAIL.  Let me rewind for a minute…

I had a blast in Atlanta Friday night, and the food at Two Urban Licks was phenomenal.  If you haven’t checked out myiPhone pics from dinner on Friday, you should!  The appetizer was Salmon Chips, a house special.  It was a homemade potato chip, topped with salmon, capers, dill, and who knows what else, but YUM!  My main dish was bronzed scallops with Gouda grits… yes… GOUDA grits.  And they were as delicious as the sound.  Throw in 2 Kettle One martinis, and my weekend of indulgence was off to a rockin’ start… I’m sure I danced off all those calories later that night though… right?

Despite my buddy Alexis accompanying me on a Whole Foods feeding frenzy at 8:30am on Saturday morning… 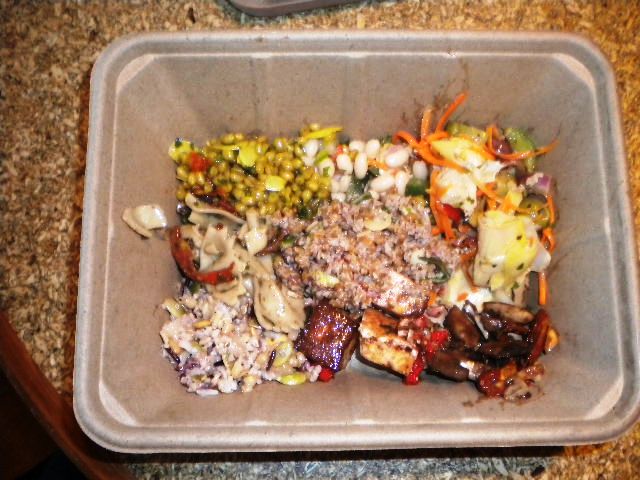 (which was full of healthy goodies)… the day only went downhill from there… including 2 cheeseburgers, 1/2 a buffalo chicken wrap, some french fries, 1/2 a black & white cookie… then it was Sunday… which included tortilla chips, 1/2 slice of pound cake and a handful of chocolate chips.

Luckily I spent some time hittin’ up the local farmer’s markets to stock up on healthy goodies for the week… for cheap! All this: 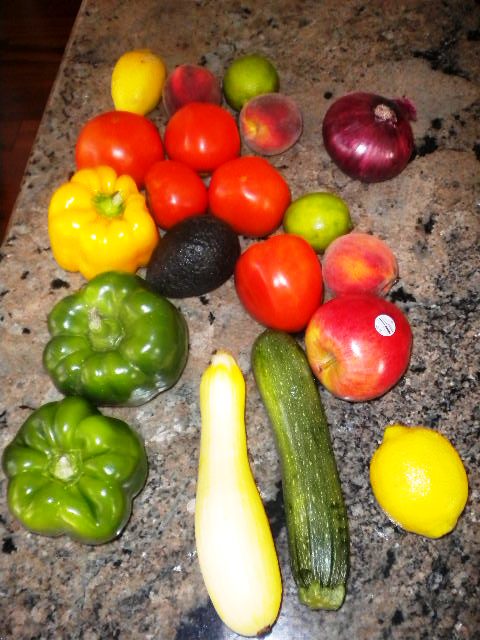 for $10. Heck yes!  I ended up food shopping at the grocery, 2 farmer’s markets, and BJ’s (our wholesale club which I refer to as Costco because who wants to say I’m going to BJ’s?) 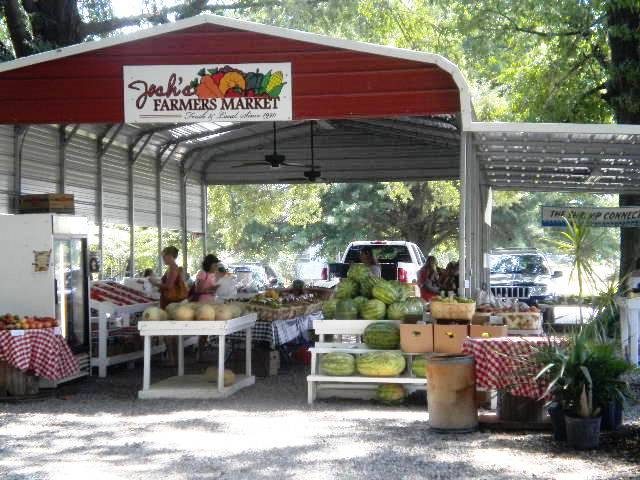 Despite buying healthy foods, I kept up the indulgence theme through Sunday evening, which left me feeling ‘ick’.

So this morning I felt inspired. “Let’s get on track!”, I thought.  So I set the alarm for 6:15am (it’s early for me!), nudged Koda out of her bed, put on my running shoes and hit the pavement for week 2 of Couch to 5K.

WOW.  What a difference not running in the midday heat makes!  I actually felt good running (well… walking and jogging ;)).  After 30 minutes, I was back home.  After chugging some water, I was on to breakfast.  I was trying out these new fun finds: 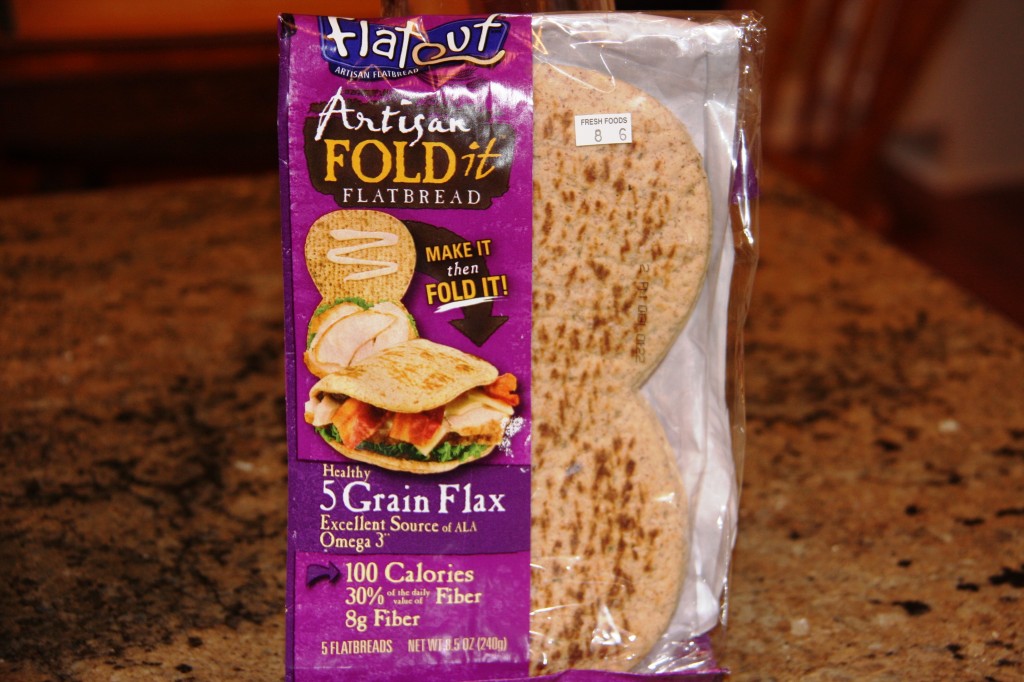 I made a 1 egg scramble with spinach and leftover mixture of tomato, red onion and cilantro… 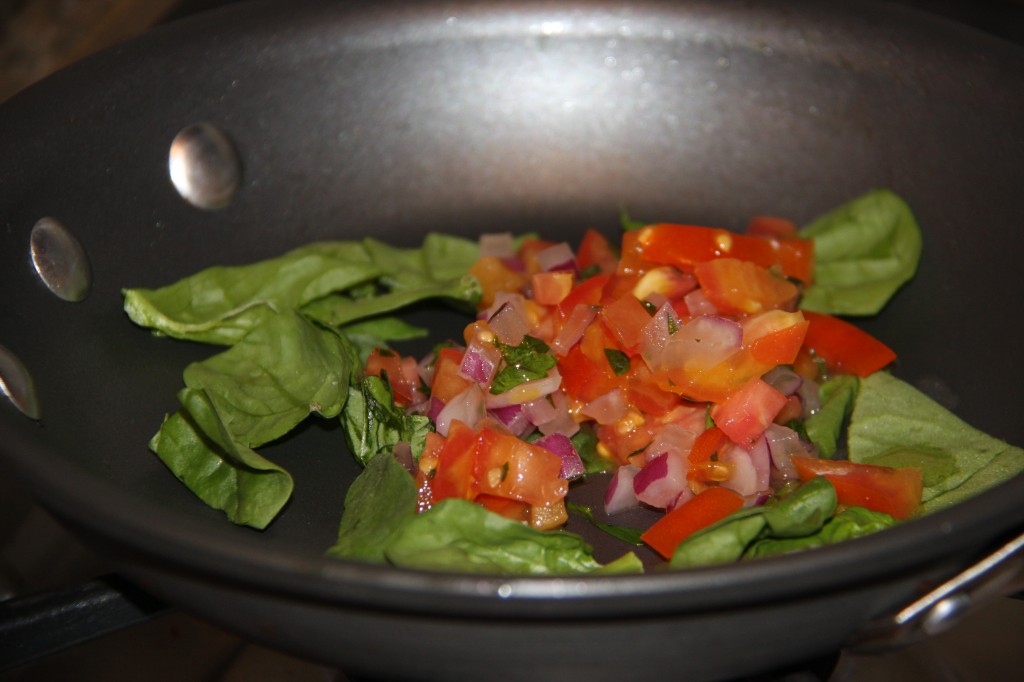 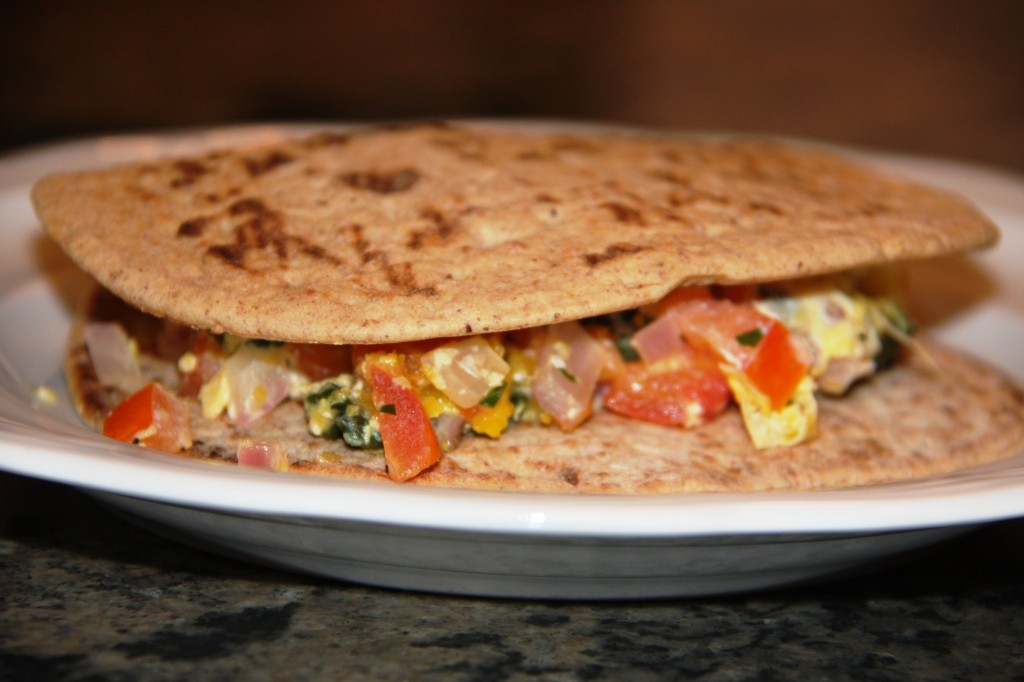 It tasted really good, but the flatbread was too doughy to hold my eggy goodness.  Would have been much better toasted… lesson learned. 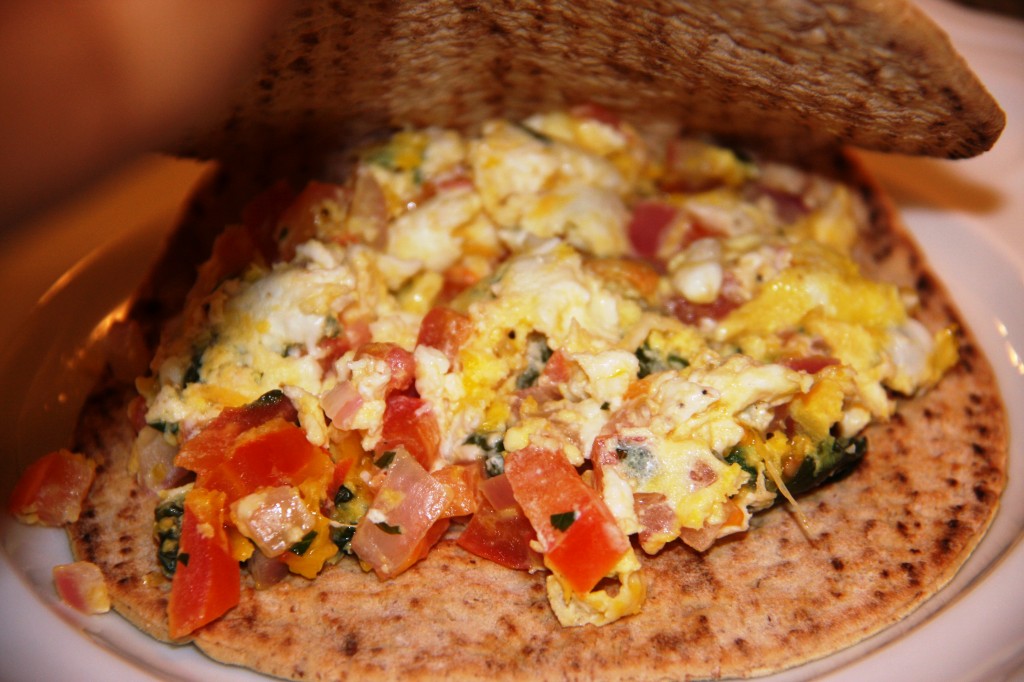 and there was a small cup ‘o joe. 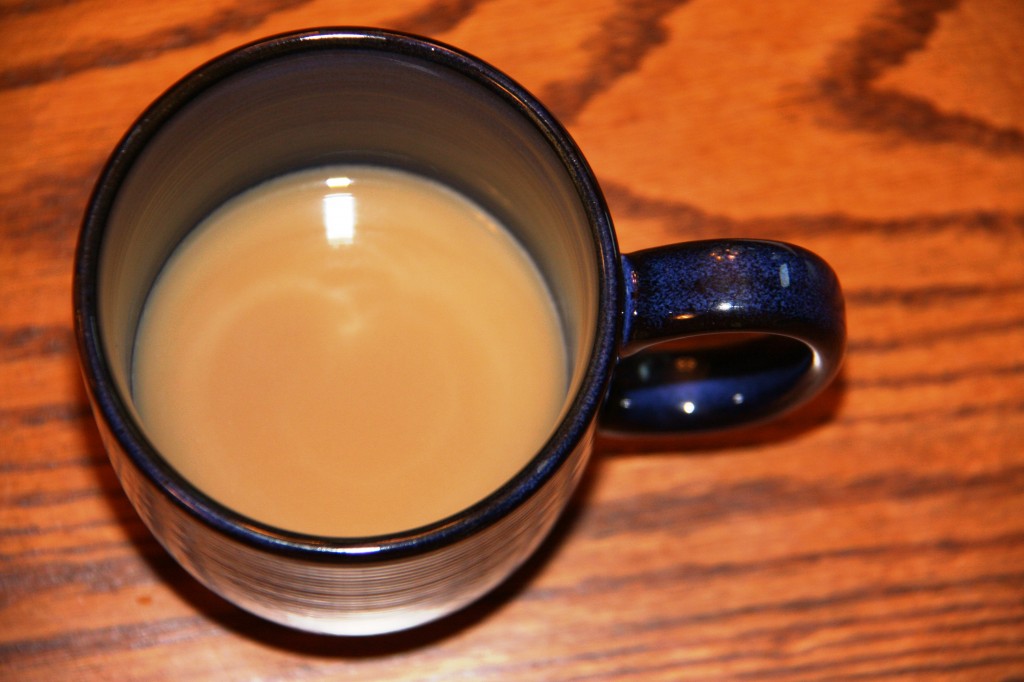 To continue with the Monday motivation… I’ve gotten a few emailed questions about how many calories I eat… and you know what… I don’t know! So I thought I’d track my intake this week just for kicks… so here’s the breakfast breakdown:

Do you count calories? Diabetic Exchanges? Or just wing it?

I munched on a crunchy Gala apple on the way into Charlotte this morning… but forgot to take a picture- oops.

Then I made it home in time for lunch… which was a big disappointment.  Don’t you hate it when you waste a meal on something that didn’t even taste good? Well, it’s what I get for trying to use leftovers that weren’t too tasty the first time around…  last night we had “blackened” cod, which was over salted…. did I think the salt would magically disappear overnight? Guess so… 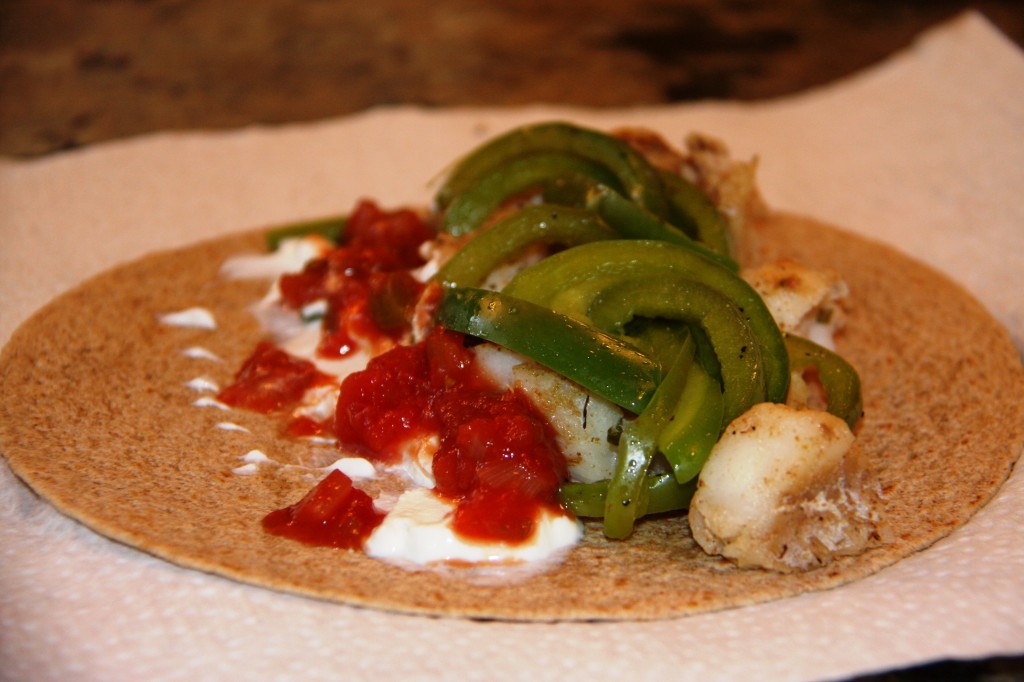 Yuck.  Salty.  Not even delicious sour cream could redeem this wrap.

Then I had some baby carrots and hummus… I think the baby carrots were old (even though I bought them yesterday)… or maybe I just miss the taste of big carrots… baby carrots= yuck. 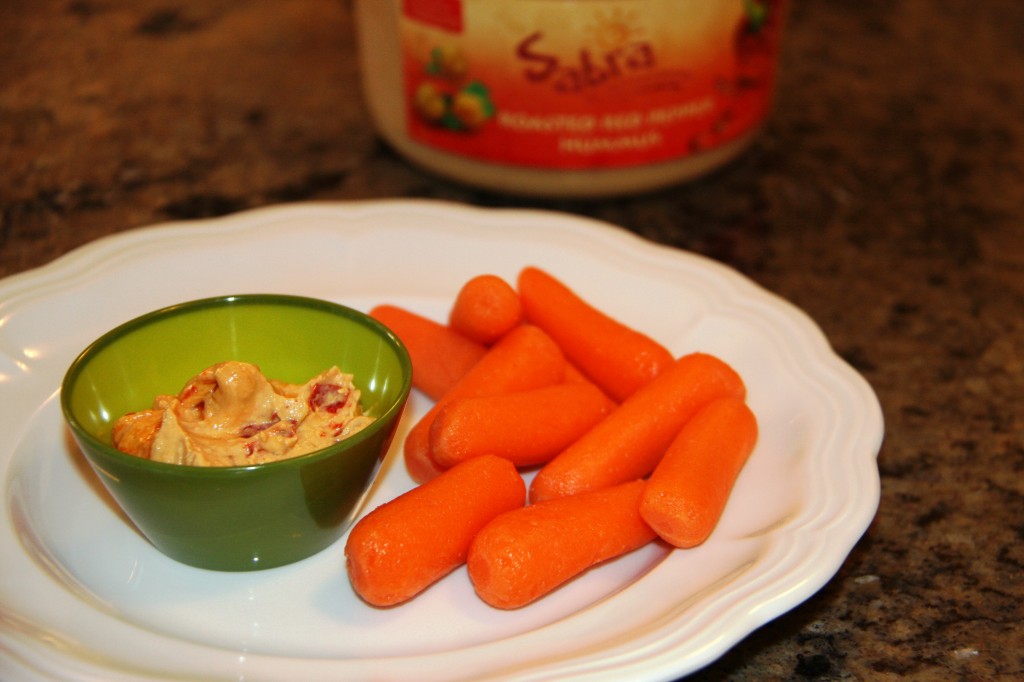 Probably the most disappointing 347 calories I’ve consumed in a long time… I better make up for it with a delish dinner! 😛

I totally should be focused on working, but I got distracted by a snack attack and a funny puppy!  To satisfy my hunger (or boredom?  Not sure which it was…) I decided to go GREEK!  ::shout out to all my KD ladies out there!::  But I digress… I meant in the form of yogurt… Fage 2%.  What?!? Where’s the Chobani?!? Yup, I switched it up. I’m wild.

Koda was thrilled that I woke her from her slumber to pose with my yogurt. 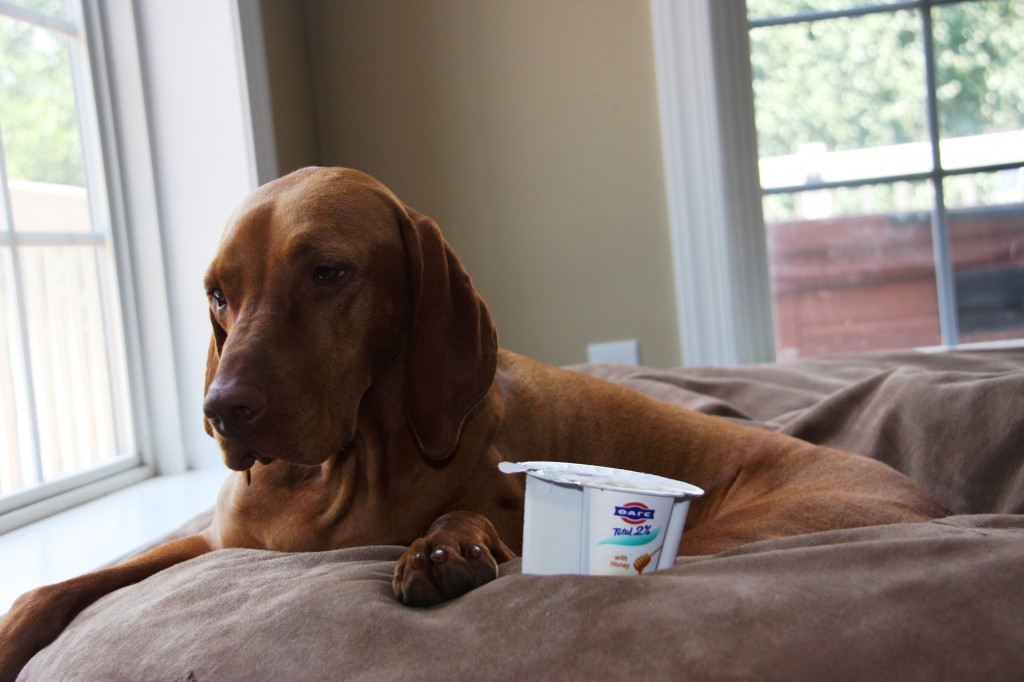 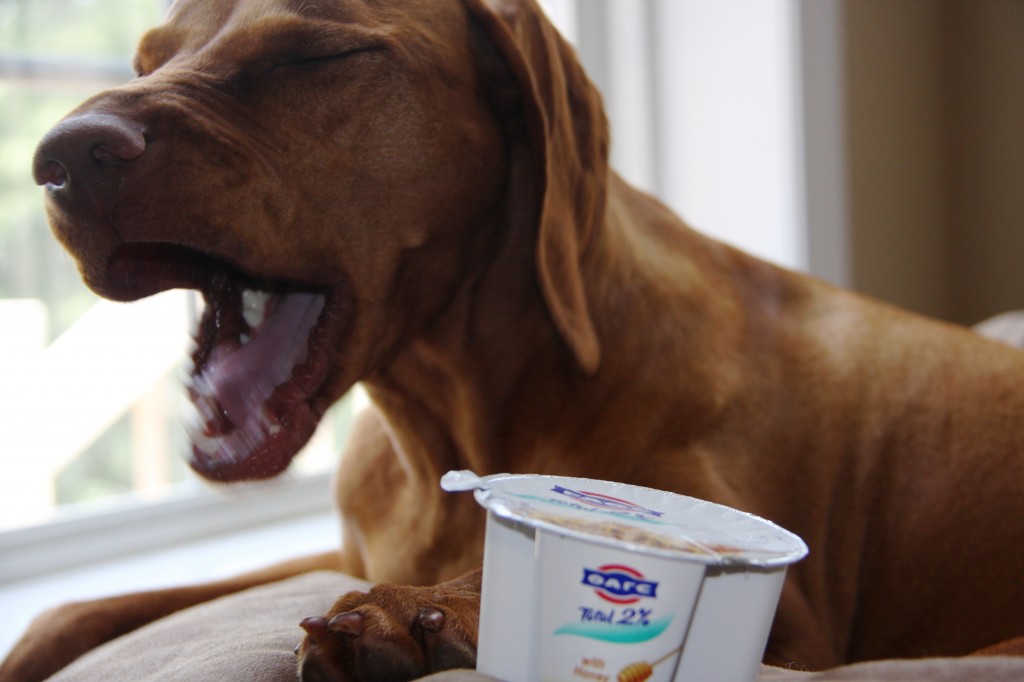 But finally gave in, still slightly annoyed, and nestled down next to the Fage… 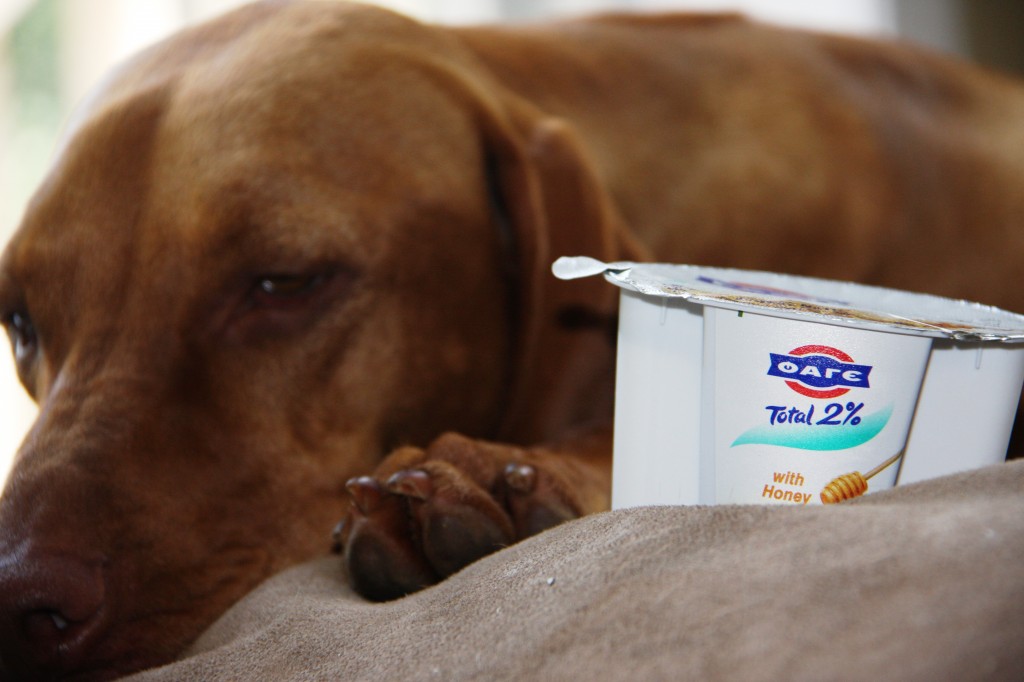 After this, I realized the whole point of grabbing the yogurt from the fridge was to satisfy my hunger, not have a photo shoot.  So I ate the Fage (with honey…. YUMMM!!!) and before I was able to lick the last of it from the container, Koda was out cold… 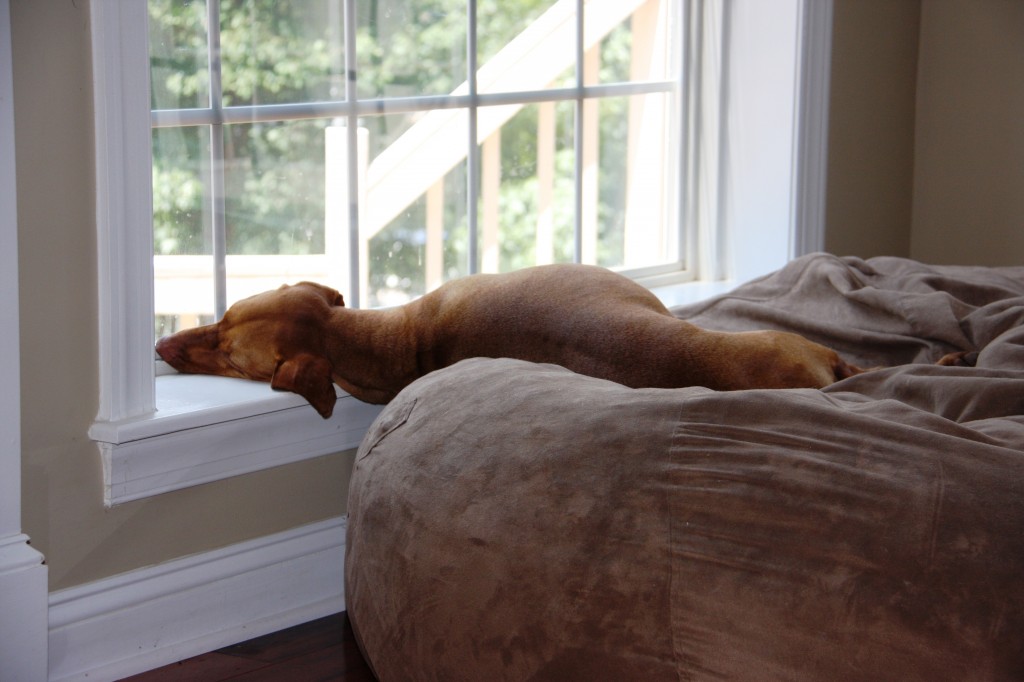 How can that be comfortable?! But from the soft sound of puppy snores, clearly, she is perfectly comfy. 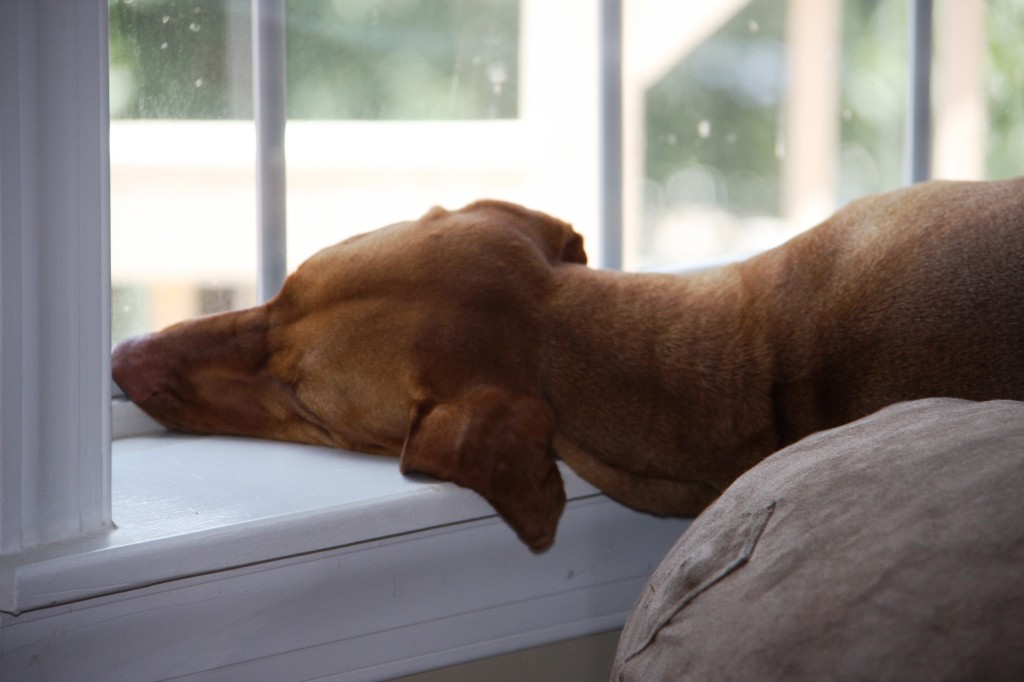 Easy, yummy dinner tonight started with a simple salad of arugula, spinach, peppers and onions.  I also topped it with 1 tbsp of Newman’s light balsamic after the photo. 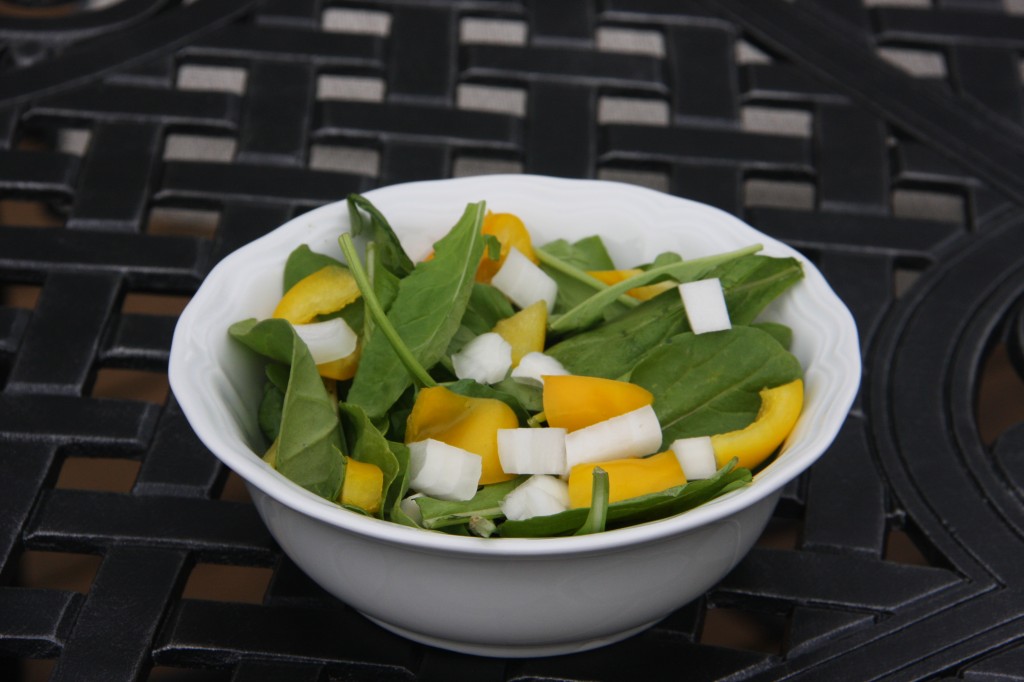 Then I used a wheat dough ball I picked up from the Teeter to make some semi-homemade pizza.  I topped my half with sauce, peppers, onions, broccoli and a little fresh mozzarella.. Hubb’s half was similar, but with added bacon. 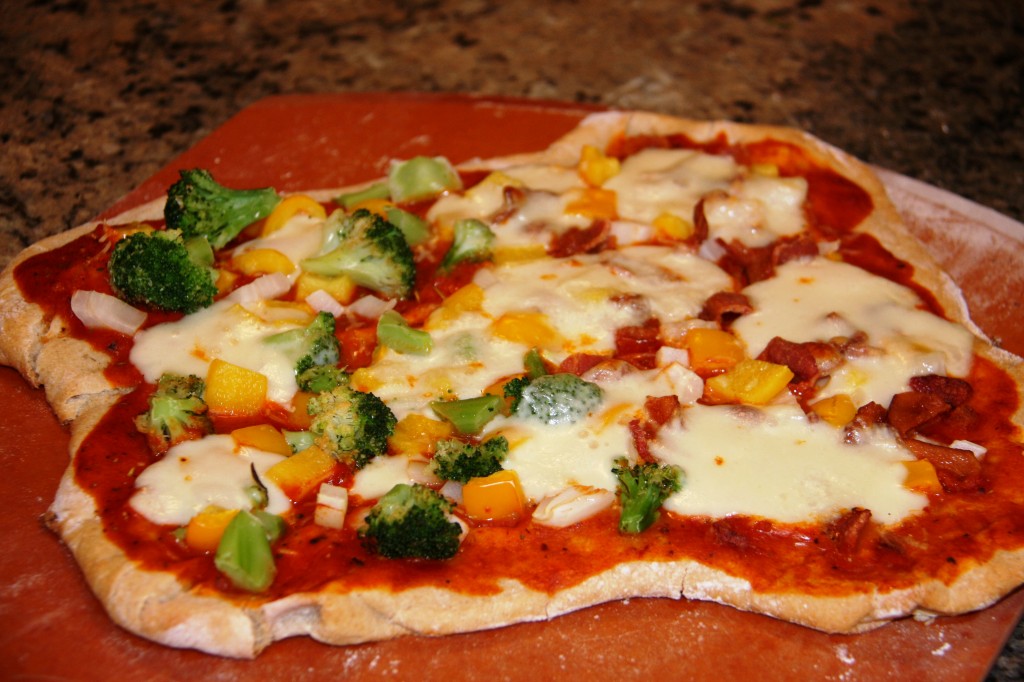 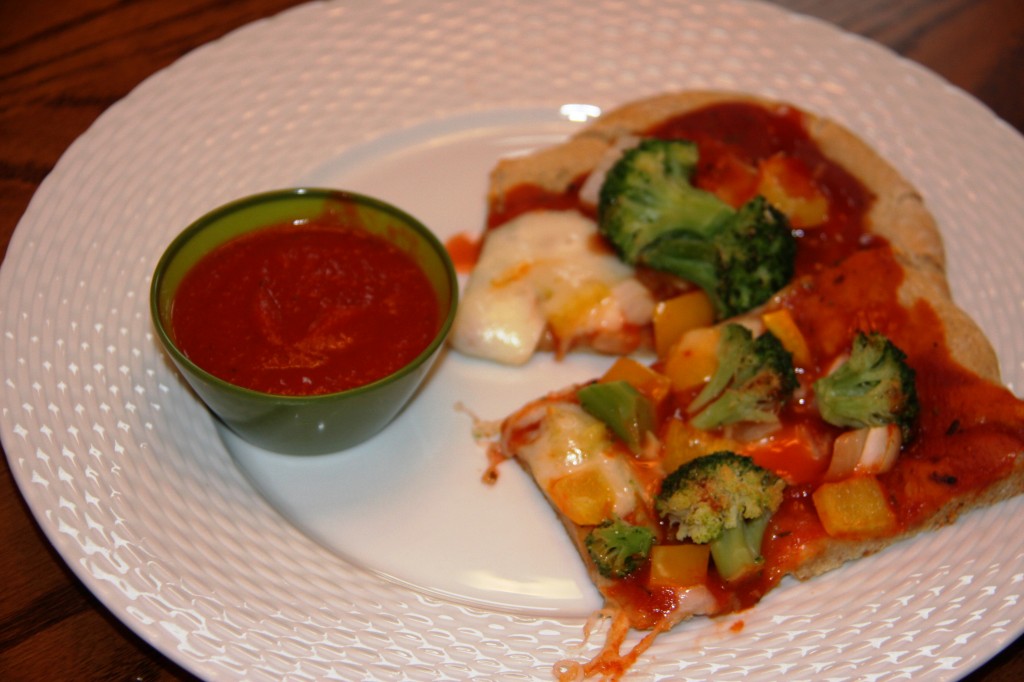 I also went back to snag a third slice.  Tasty!

I entered everything into 411fit.com and here are the totals for dinner:

My evaluation?  My percentages were great! A very healthy balance.  My calories are a little low, but maybe I’ll eat a snack later? Who knows, but I’m full right now.

What I did discover… I hate counting calories.  I know why I don’t do it anymore.  It’s easy to get obsessive and measuring everything I eat BLOWS.

This is a hard thing to admit because I certainly advocate recording foods, and keeping track of diabetic exchanges to all my clients.  I understand their annoyance at having to do this, but to be honest, when you are first learning how to eat in a balanced, healthy way, it makes since and is usually necessary to track your foods.  But it definitely has shown me how far I’ve come with my own, personal eating habits!

It sounds like I’m not alone with not liking counting calories… sounds like we are all pretty much on the same page, but checking out how many calories I eat was interesting to see…

but now my mind is wondering because I need to go watch ‘The Men Tell All’ 😉  I’ll leave you with one final Koda napping picture… I just love her. 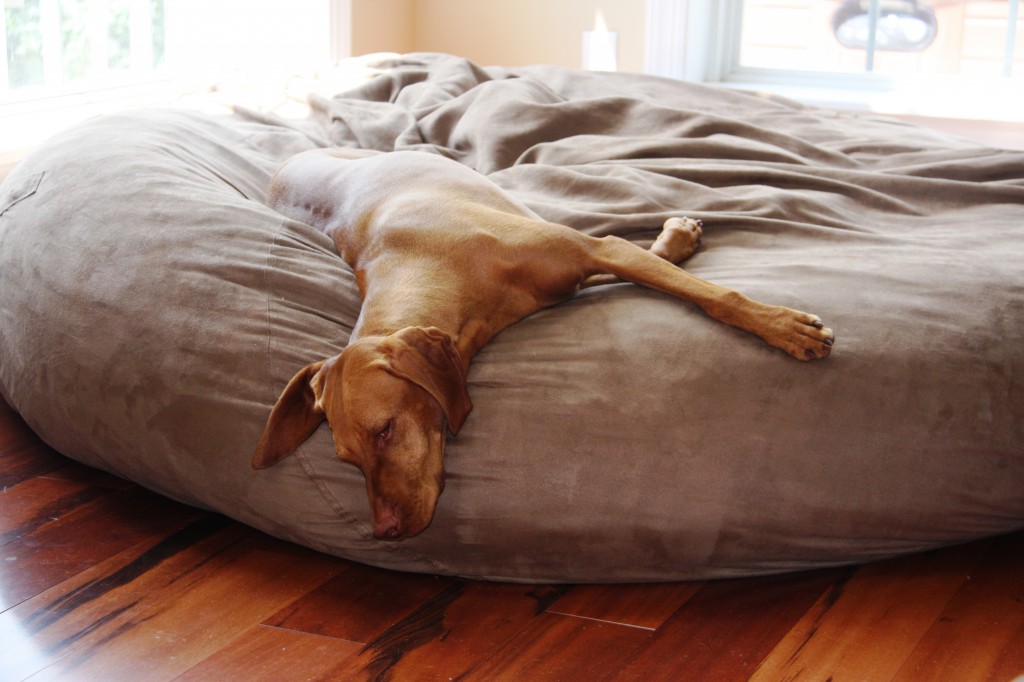