I woke up this morning without a topic to blog about. Hoping for inspiration, I keuriged a cup of decaf and decided to read through some headlines. I find that more often than not news can wake me up better than coffee.

First off, though, all you moms know that Bumbo issued a recall of their seats, right? These things: 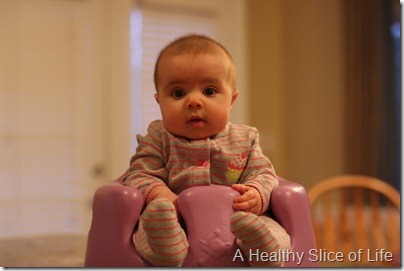 Yes, mom fail. Hailey sat in hers on the counter. Don’t do it. There have been falls and skull fractures. If you have the seat, you can contact Bumbo at http://www.recall.bumbousa.com/ and get a free restraint belt.

Now let’s talk obesity in America. 68.8% of all US adults are either overweight or obese (source). This can’t surprise many people since figuring out how to make Americans healthier is always front and center in the news.

Recently Mayor Bloomberg announced plans to ban large sweetened drinks from New York City as a new anti-obesity platform. Under this initiative, drinks like sodas, slushies, lemonade, sweetened tea, juice and sweetened coffee (drinks with more than 25 calories per 8 ounces) would have to be sold in 16oz sized cups or less, about the size of a usual medium drink.

Personally, no. I think these regulations are well-intentioned, but fail miserably in accomplishing the goal at hand. I don’t believe that the government regulating the amount or type of food we eat is the answer, mostly because where does it stop? What’s next? No desserts allowed on menus? No Béarnaise sauce? A scale in the restaurant that allows thin people to order and eat more than heavier people?

If the government really wants to help America get healthier, why don’t they stop subsidizing corn, soybeans and wheat, which allows junk food to undersell nutritious food? But that’s a topic for another day.

Ok, stepping down from my soapbox now and asking for your thoughts. I love a good discussion, so please weigh (pun intended) in.

Do you thinking banning large sweetened drinks is a good choice in America’s quest to be healthier?