These words were spoken by our tour guide at Mike’s Bike Tours in Munich.  By the time we reached the tour (which was day 3), I knew that truer words have never been spoken.

It didn’t take long to tell that the foods I eat in my everyday life were going to be hard to come by.  Proof? Try starting with the meal on the plane: 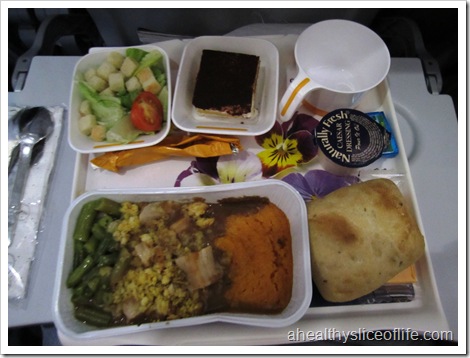 I know, I know, it’s plane food, not German food, but seriously… they call that a salad??

We arrived in Munich around 8:30am, and were at Oktoberfest by 10:00am.  After seeing all the excitement on the way to hotel, we couldn’t resist diving in!  We grabbed the first thing we saw to eat, which happened to be a giant pretzel.  I ended up eating a lot of giant pretzels… they’re everywhere! 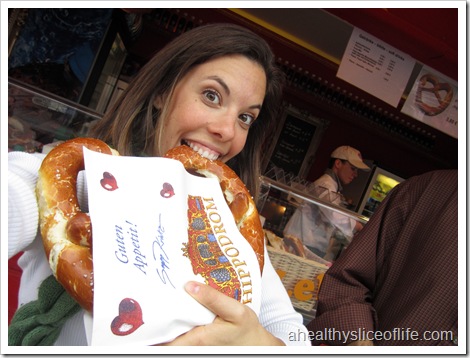 But right after the pretzel, we headed to the beer tents, where we remained for most of the day.  And if you aren’t a fan of beer, don’t bother visiting Oktoberfest… but luckily, Hubbs is a fan. 😉 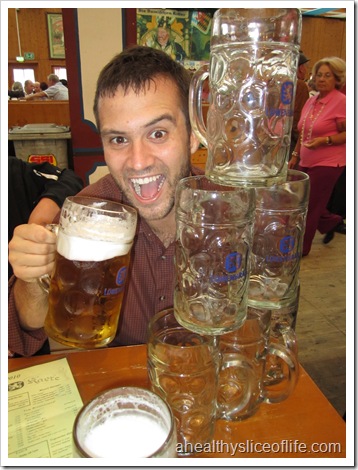 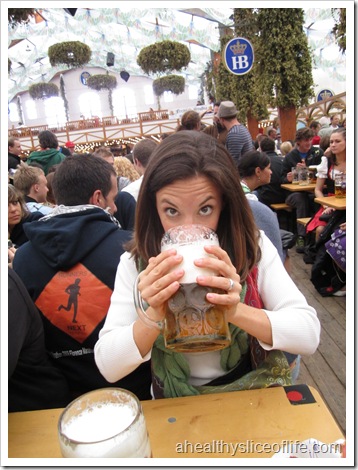 Beers are only served in liters and there isn’t much variety in the type offered.

In Germany, we were told there is a purity law that states only water, hops and barley can be used in making beer.  Because of this, there doesn’t seem to be a wide variety of choices like there is in the US, but at least the beer they make is YUMMY, so you don’t need a wide variety 🙂  Anyone from Germany? Can you confirm that story for me?

Anyways, some of the tents served food, but the menus were slightly difficult to decipher. 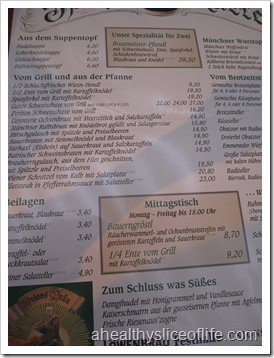 and we ended up eating a lot of rotisserie chicken. 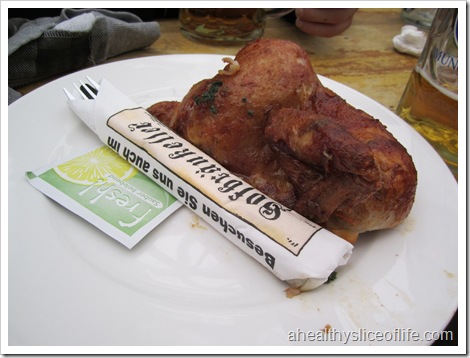 These guys were tasty! By habit I would peel off the skin to eat the meat, but was continuously scolded by our new German and Italian friends that I was discarding the best part.

I’m doing the best I can to focus on the food & beer drinks of the trip, but I have to stray for a moment and highlight the awesome-ness that is the inside of the beer tents.  First of all, they are HUGE and we estimated the large ones hold roughly 8000-9000 people.  There is a live band playing and people from all over the world singing, dancing and chatting together.  It was one of the coolest experiences I’ve ever had. 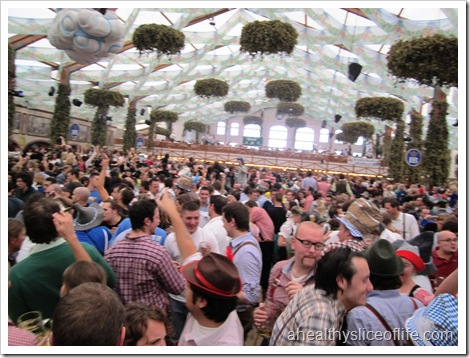 I wasn’t going to, but I have to try and post this video.  The camera work might make you sick, but it was during the only time we heard a song we recognized and had to capture it on film! I hope it works 🙂

Ok, back to the food!  Unfortunately it didn’t take too long for me to realize that German food wasn’t my favorite.  It’s all very heavy, mostly meat and potatoes, and didn’t sit well with my stomach. 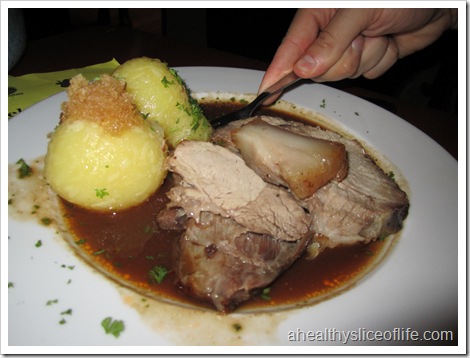 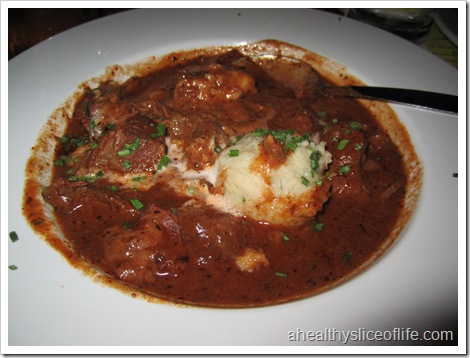 Everything tasted like an odd form of pot roast.  I mentally beat myself up because I like to be adventurous and wanted to fully sink myself into the German culture… but my stomach had other plans.  Everywhere we went, the choice was meat and potatoes, or potatoes and meat. 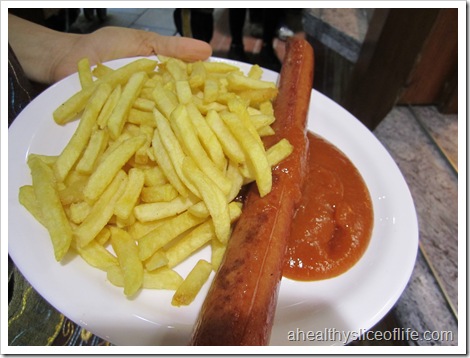 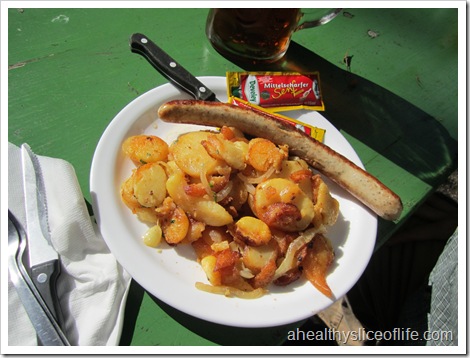 Even breakfast consisted of a wide variety of meats.  Of course, Hubbs thought this was just fine. 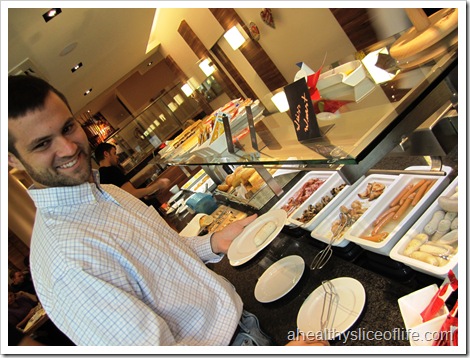 I finally found an authentic restaurant that offered a veggie plate.  Despite the waitress looking at me with disappointment when I ordered it, I did so, but they managed to even make veggies feel heavy. 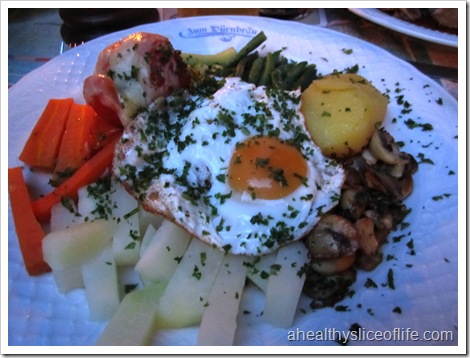 The bread soup was pretty good though 🙂 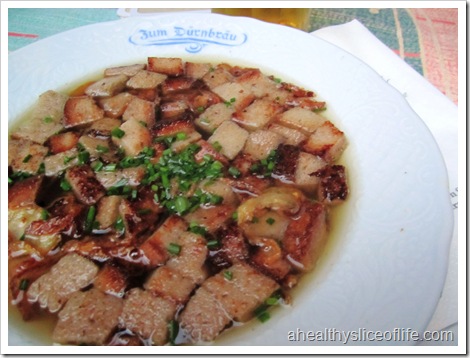 The food in Germany was consistent, and my stomach just wasn’t having it.  I felt like I lost 10 pounds during this time, despite the beer and gelato 😉 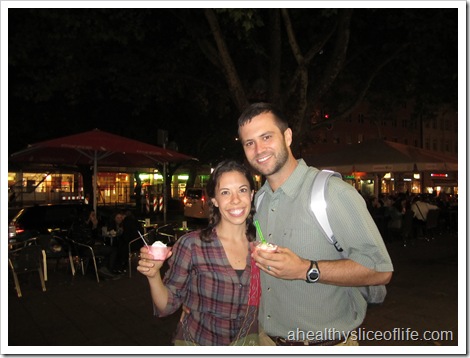 However, after 4 days in Munich, we hopped a train to spend a few days in Salzburg, Austria (read about it here!) where the food choices were much broader!  Stay tuned, tomorrow I’ll dive into our Austrian eats! 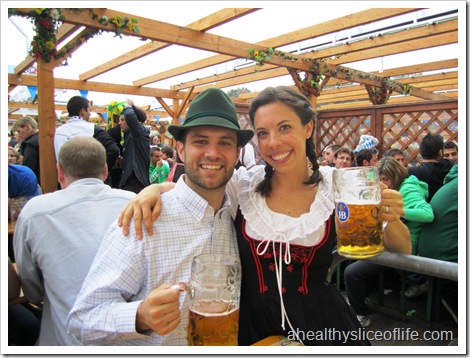 I have a question for yall…

do you want to see pictures of all the stuff we did, or should I stick to food?