Whew! Did anyone else notice that summer officially arrived this past weekend?  I might have said it before, but I mean it now.  My car temperature gauge hit 101 degrees, my hair reacted in its typical unruly way, and afternoon thunderstorms are beginning to be a daily occurrence. No complaints here though 🙂

This weekend was such a fun one! I was able to see my folks, meet baby Carter, shop with the girls and attend a mini-high-school reunion… ahem… I mean wedding.  Here’s two of best friends and me at the wedding… and proof my hair was in true summer unruliness mode: 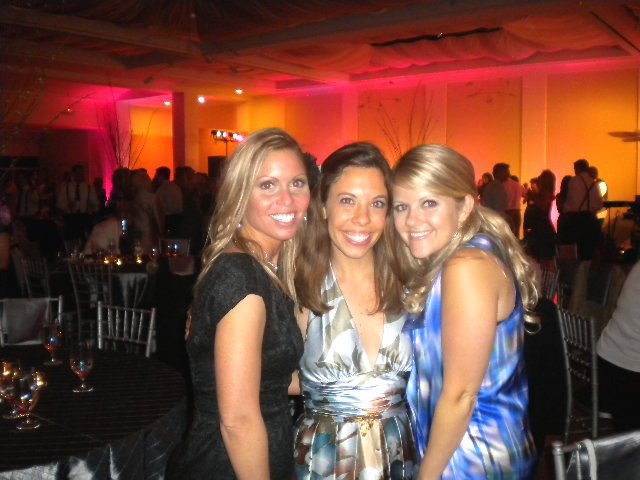 But after a fun weekend away, there’s nothing better than relaxing at home again with Hubbs and the bug.  After afternoon thunder and clouds, it all cleared up and there was a gorgeous sunset! 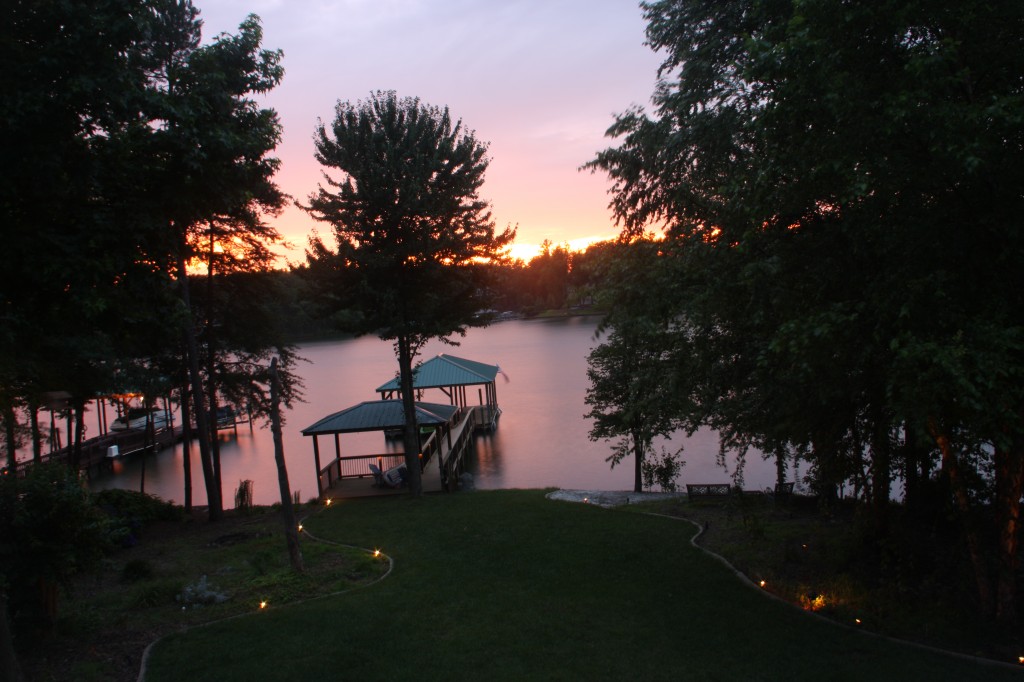 But now it’s Monday morning and it’s going to be a productive day! N.E.W.L.  has some fun ideas in the works, so I’ll enjoy working on those.  But not without breakfast first! 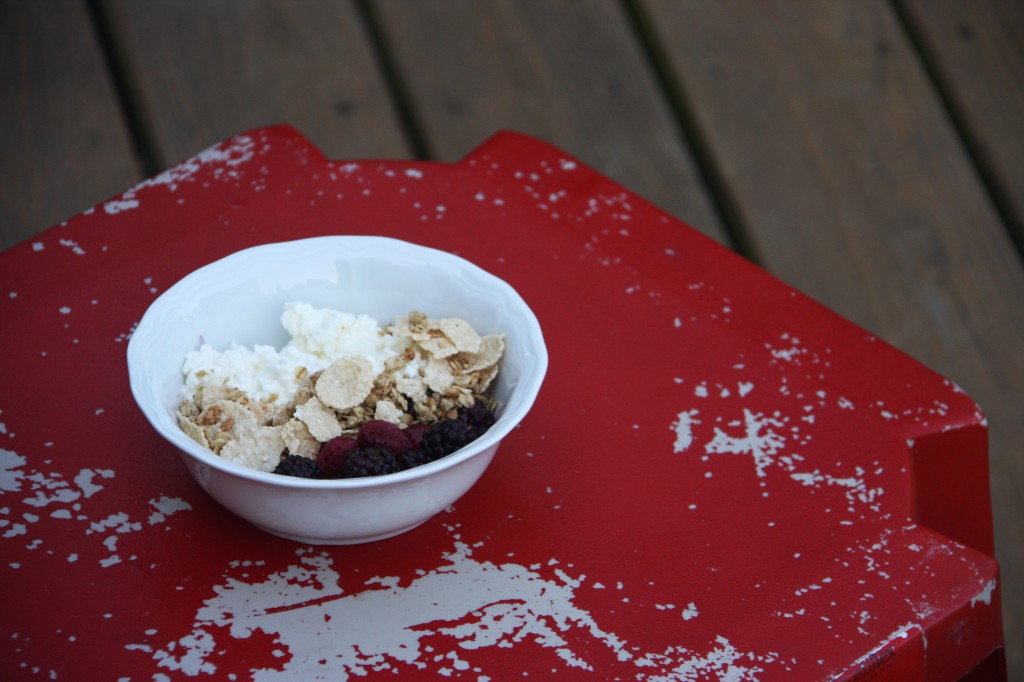 It’s nothing new, but it’s turning out to be one of my favorite summer breakfasts.  A handful (a big handful) of mixed organic berries, 1/4 c 2% cottage cheese and a sprinkle of Yogi. 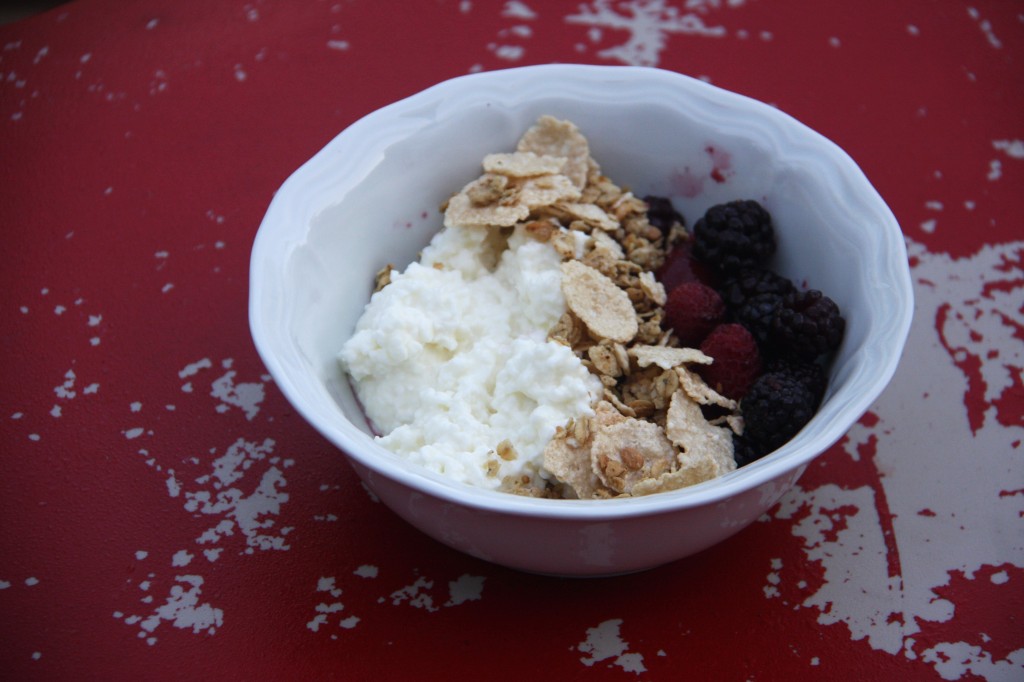 It was also a coffee morning.  All the Keurig cups we have left are Newman’s Organic Extra Bold.  I’m not usually an extra bold kind of gal, but I need it to work some of it’s magic this morning… 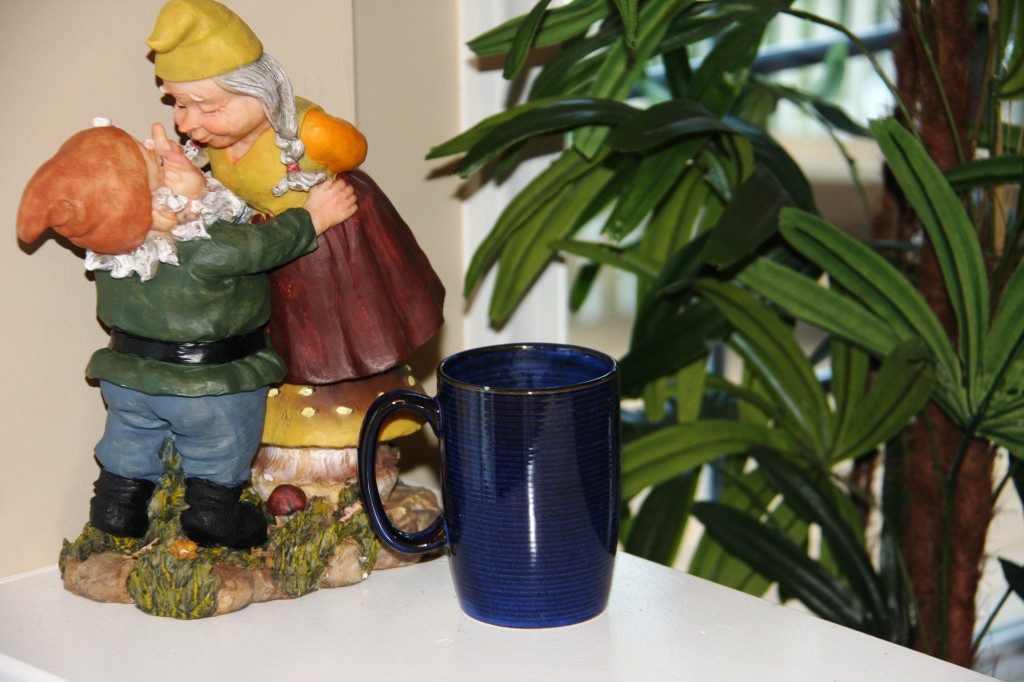 My cup ‘o joe is pictured with garden gnomes from Hubb’s mom.  She gave them to us on our wedding day, but they have yet to make it outside.  I think the underlying joke is the lady gnome, standing on the mushroom.  A jab at my short stature? Perhaps… 😉

In my personal health news… I’ve decided to give Jillian’s 30 day shred a try.  I appreciate all the feedback from yall!  I’ve heard mixed reviews, but at this point I need something to kick my behind back into exercising, so I’m going to give Jillian a shot at it… we’ll see!  😀  Anyone want to try it with me??

Jillian is officially in the house! I’m going to do one of the workouts later today (no matter how tired I am).  Kristin asked how I keep up my motivation to work out in such hot, humid weather.  Well the answer is, I don’t. HA. I’d much rather lay on the couch and read my book (currently reading The Help, and really liking it so far!).  Buuuuut, I also know how much better I feel in my bathing suit on the weekends when I’m on a work out kick.  Lately I’ve been feeling “soft” and can’t wait to feel strong again!  Plus, if I say I’ll do it on the blog, I feel accountable to all of you (which is kind of silly because I’m sure you wouldn’t come after me if I passed on the workout… right? ;))  So thank you to all of yall, for helping me get back on the exercise train!

My morning snack was all that was left in the fridge. Hummus and Kashi crackers. 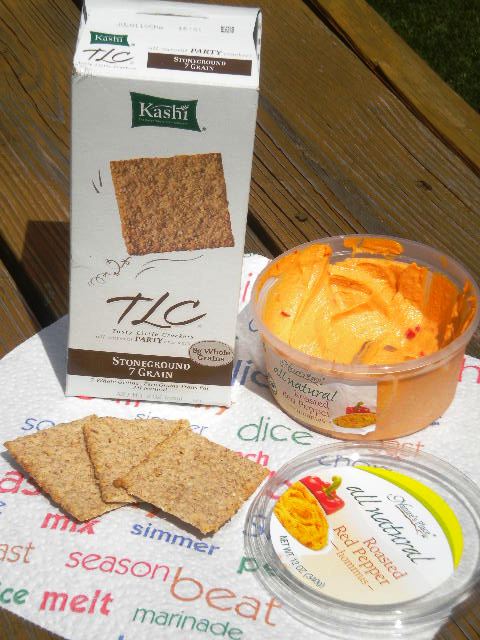 It was my first time trying these Kashi crackers and I liked them a lot!  After doing a lot of computer work in the morning, followed by errands, I ended up at the grocery store later than I anticipated.  And I was hungry.  So I did my shopping while enjoying some Harris Teeter sushi.  This grosses my hubby out (grocery store sushi), but I’m a fan 😀 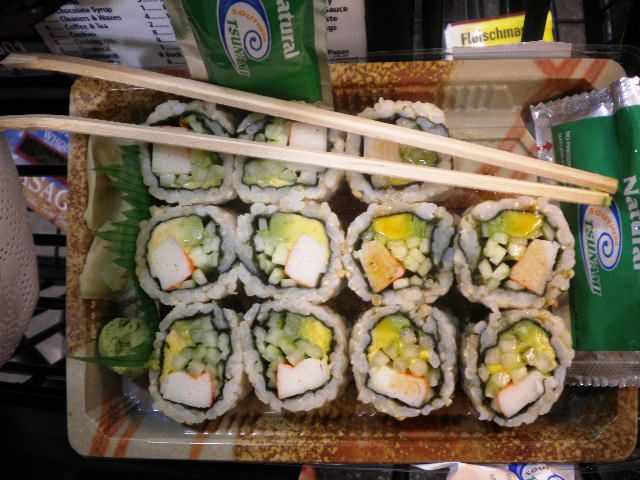 Verdict: I like Jillian!  First of all, it’s hard to complain about a 20 minute work out.  I started at Level 1 (there are 3 levels that increase in difficulty).  I really liked how she wasted no time getting my heart rate up and how she combined different muscle groups during strength training.  Unfortunately she began with big arm circles, which pulled on the skin healing on my back (*I might not have mentioned it, but I have a family history of melanoma, so I have to go to the dermatologist every 6 months for skin checks… they had to biopsy 2 spots of Friday, so I’m still healing.  Wear sunscreen! :P*)  But after 20 minutes, I was sweating and could feel fatigue in my muscles: SUCCESS! It was exactly a butt-kicking, but it was a work out.  I’m interested to see if I feel it at all tomorrow.

After my training session with J ;), I munched on these 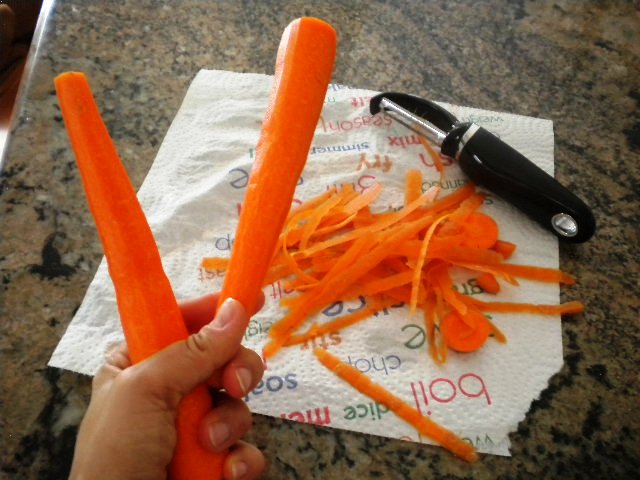 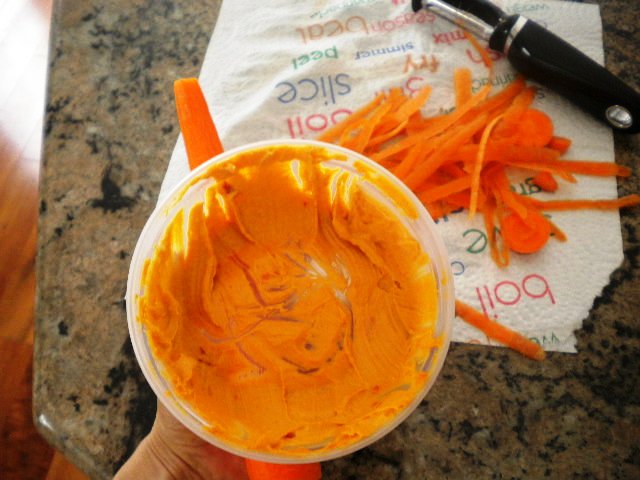 Am I the only one that thinks big carrots have so much more flavor than baby ones??

We got the typical afternoon storm, which led to an bored vizsla pup 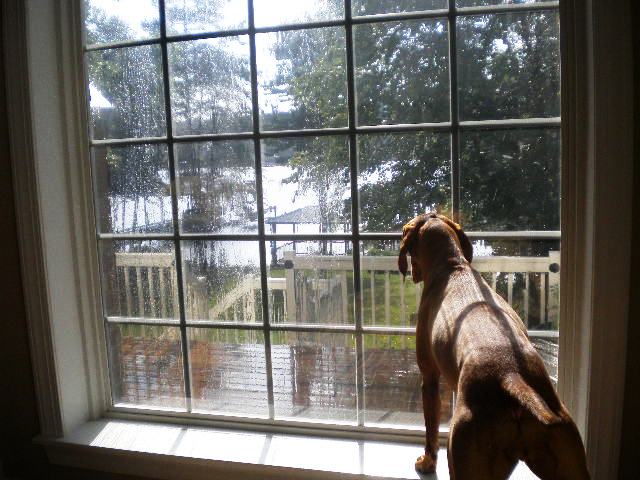 It rained so hard, that my garden had it’s first casualty of the season… poor little guy… 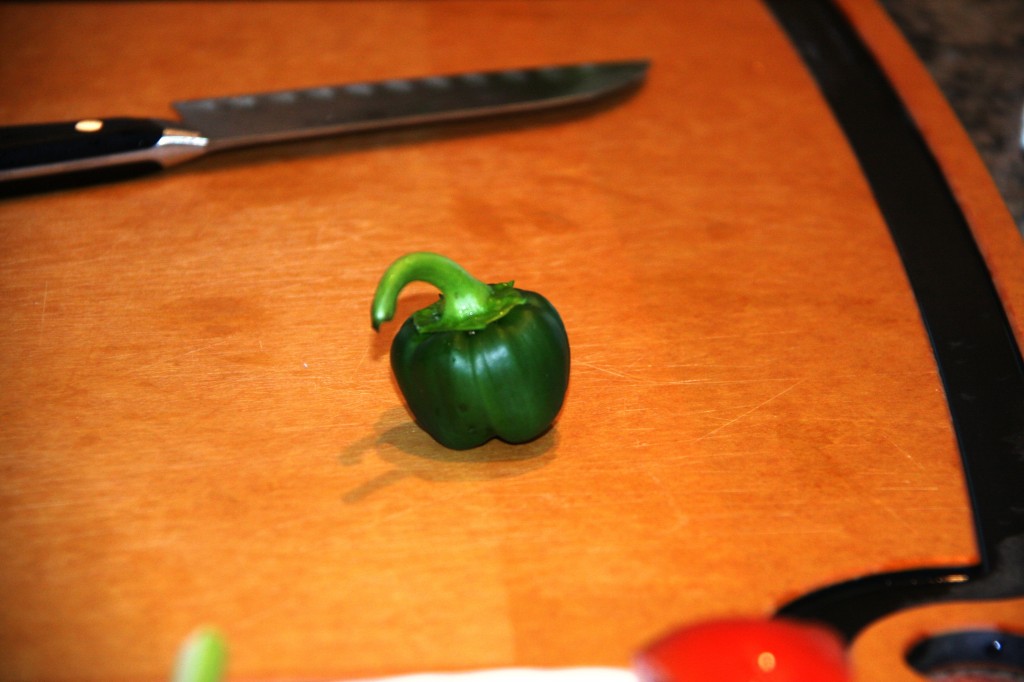 I got a call from HUbbs that tonight was going to be a late night at the hospital (he sells spinal implants),  so I switched from trying a new dinner recipe (I’ll save it for tomorrow), and made myself a jumbo salad instead. 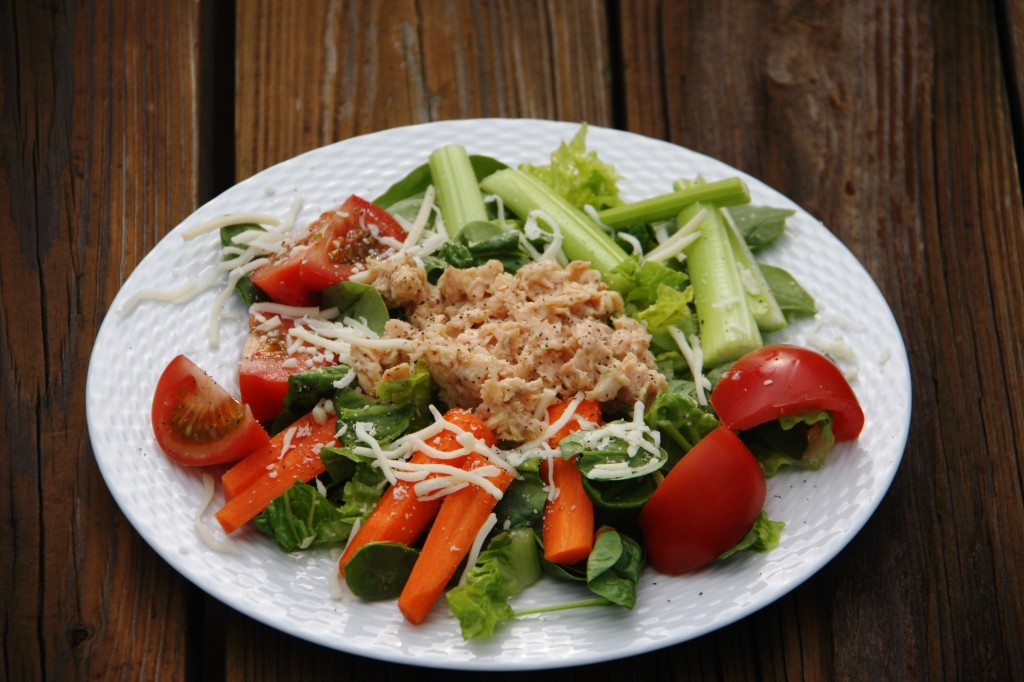 Spinach, romaine, tomato, carrots, celery, a sprinkle of mozzarella and a salmon cup!  Koda thought the salmon was for her… silly pup! 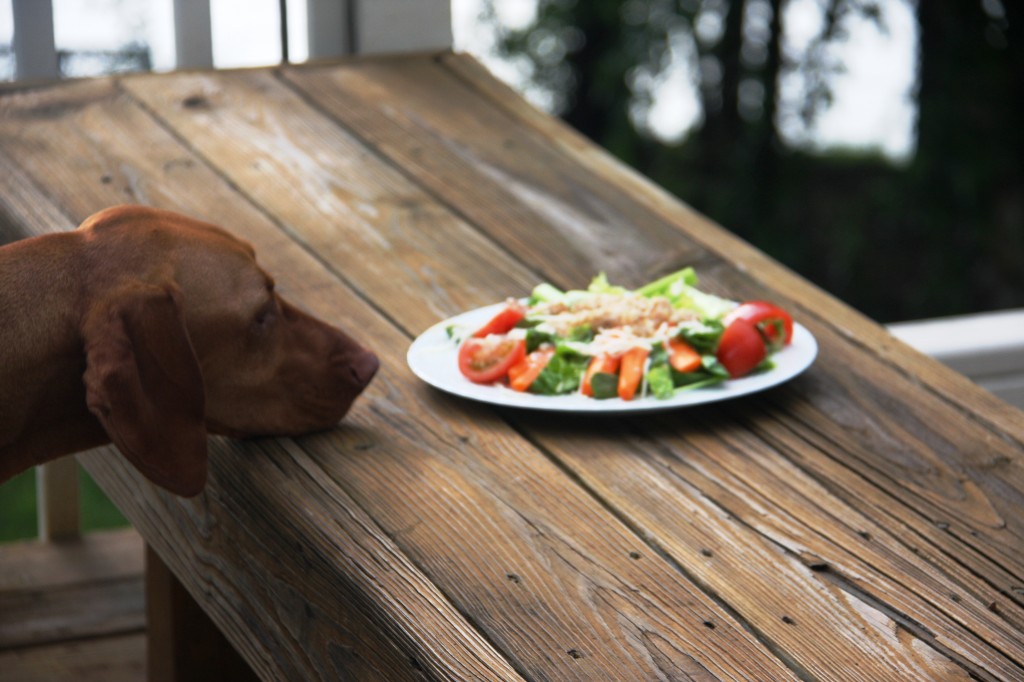 drizzled some Newman’s Own Light Balsamic on top and dug in.  It was BIG.  I ate most of it…  then I nuked a sweet potato on the side.  I like them better baked, but the prep time for the microwave was more what I was looking for. 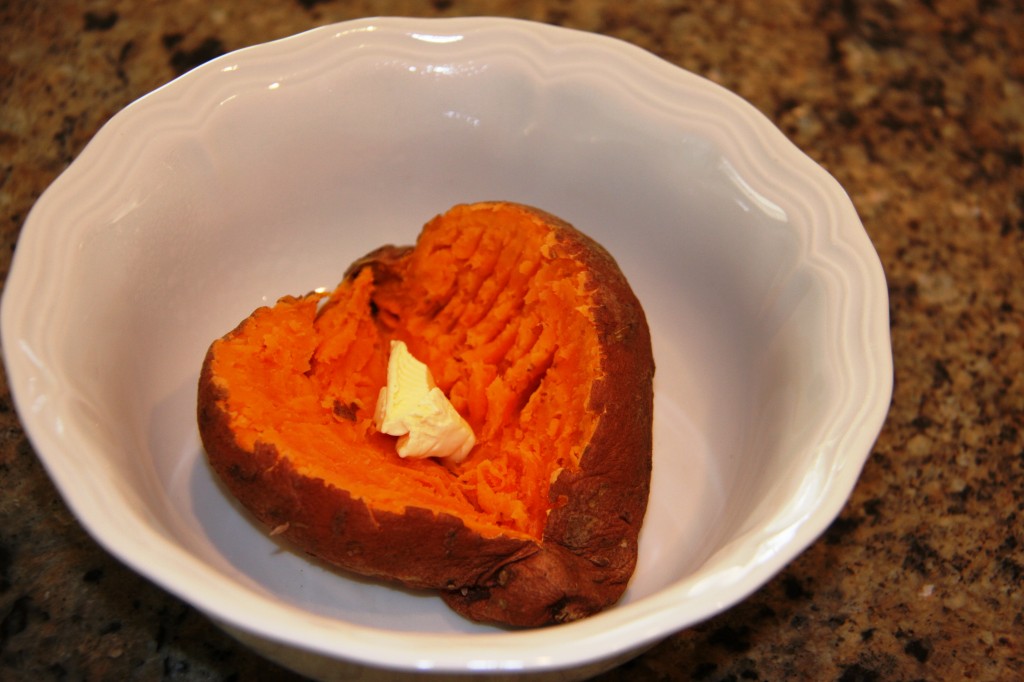 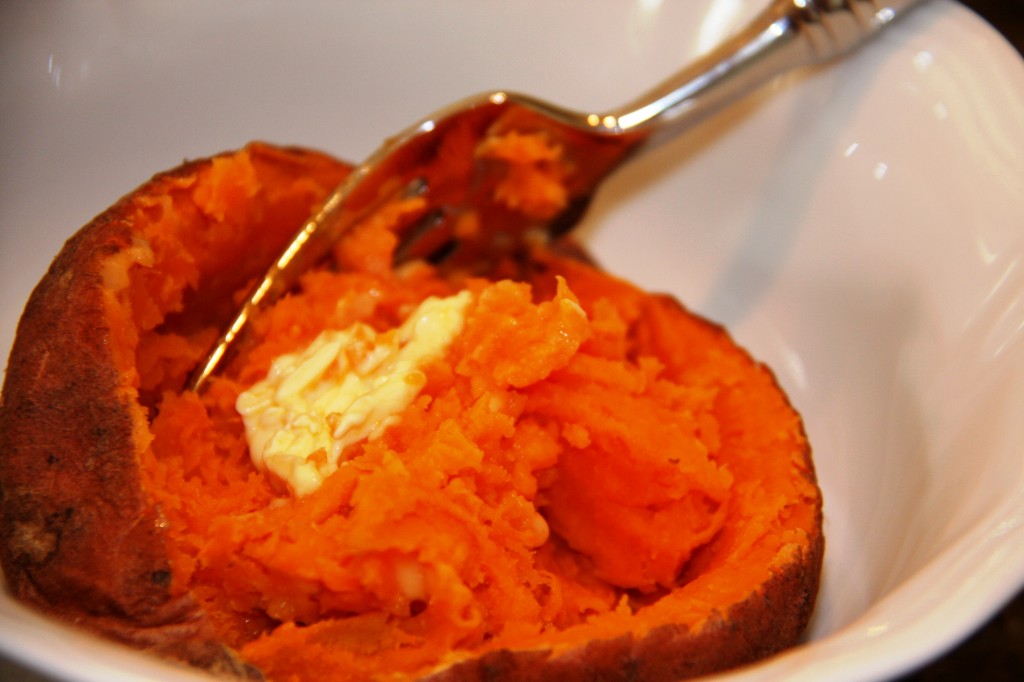