Today I wanted to spend a few minutes paying homage to an exercise I cursed for many years: Running.

Prior to 2 1/2 months ago, I pretty much had accepted the fact that I was not cut out to be a runner.  I had a million excuses:  my wide hips put too much pressure on my knees, I had something wrong with my leg skin because it would get irritated when I ran (kid you not… I was serious), & surely I was in great shape, but just not a runner, after all, I wasn’t the tall, naturally thin, runner type.

About that same time I began to immerse myself deeper in the world of healthy living blogs, and it seemed EVERYONE was a runner. Seriously? Was running a staple in healthy living? To answer the question, in my opinion, no, I don’t think it is, but I was intrigued.  I saw women of all shapes, sizes and body types that were able to run.  Suddenly my competitive side began to kick in (think Monica from FRIENDS).  Surely if all these people can do it, I can too! … right? 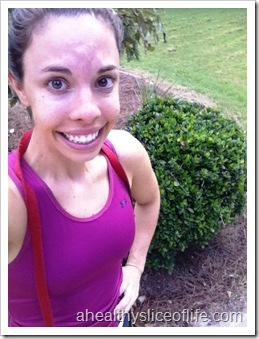 I had heard of the Couch to 5k program before via word of mouth and decided to look into it.  I saw it was available for download to the iPhone, and since I just bought my iPhone and was an app-downloading addict, this seemed like the best option for me.

My first day on the program was July 19th.  I know this because the app has a system that tracks your progress and allows you to record any personal notes afterwards.  The first day’s regime went like this:

Easy peasy, right? My notes from that day?

“Harder than I anticipated the first day to be. Right knee kept feeling like it was catching.  Heat was brutal and probably made it harder. I feel very accomplished though!”

Wow.  I was only jogging for 60 seconds! And I thought that was hard? Plus the excuses… the heat… my knee… wah wah WAHHHH.  I share this because for you non-runners out there, I want you to know I was there.  It was truly hard for me. 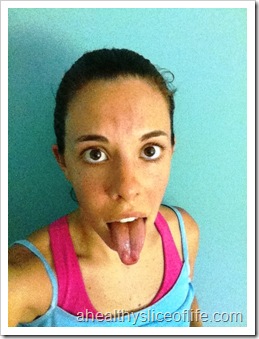 From here I created a term: wogging.  A combo of walking and jogging.  I certainly didn’t feel like a runner yet, but I was turning into an incredible wogger!  Time passed and I stuck to the schedule: three days a week.  Even if it meant waking up earlier than usual to beat the heat.

I felt my endurance building and it seemed I was improving.  Some days I felt like a champ, like HERE, and others I almost wanted to throw in the towel, like HERE.  But most importantly, I stuck to it.

Changes happened over the past 3 months… I went from a 60 second jog to a 30 minute run! 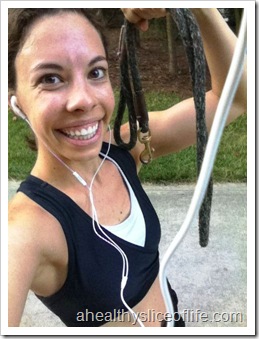 I can’t remember the last time I’ve been so proud of myself.  I know I didn’t cure cancer, but I transformed myself into a runner when I had never been able to run more than 60 seconds in my entire 27 years!

Some benefits I found aside from a swelling ego? 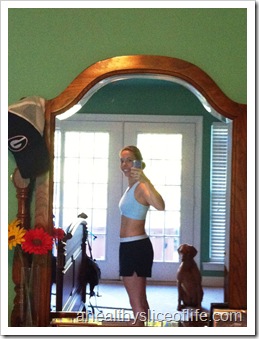 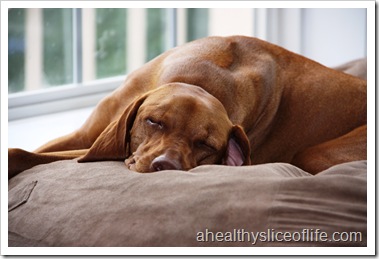 This post was a bit lengthy, but I really wanted to highlight that I’ve never been a runner.  I tried and failed in the past, but now I can proudly say I am a runner.  With the help of Couch to 5k, I can run for 3 miles straight.

Are you a runner?  Did it come to you naturally? Or did you have to work at it, like me?

What is your best running tip you could share with me?