Wow Wow Wow Wow What a weekend! But first, I don’t think the race could have been nearly as wonderful without the sweet words of encouragement y’all left me on Friday’s post! I was smiling so big knowing I had a whole team of support behind me. Y’all rock.

I guess if I look back on my game plan, the only step I missed was getting plenty of sleep.  We ended up watching a scary movie with our friends of Friday and didn’t get to sleep until about midnight. Oops. But I was well hydrated and we carbo loaded 😉 for dinner with spaghetti, so when my alarm went off at 6:00am, I still felt ready to roll! 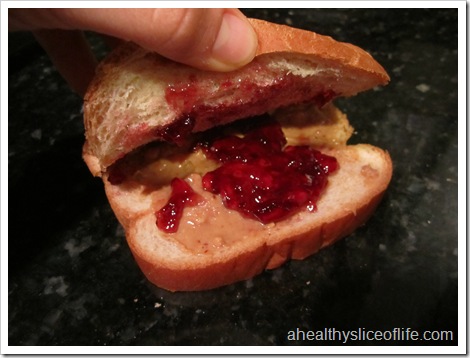 a classic peanut butter and jelly with a side of coffee. 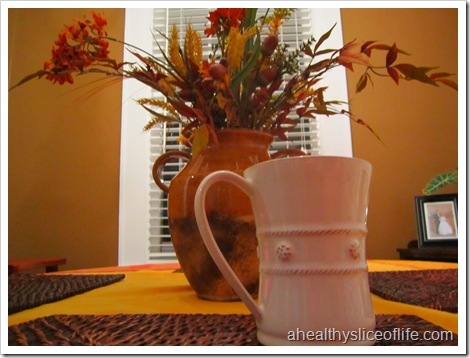 This settled beautifully in my stomach, as I had planned, and we were out the door!

Too bad we didn’t plan on running into this: 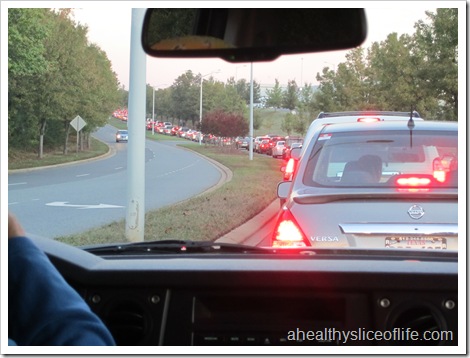 The traffic was miserable. We weren’t even creeping forward.  We just sat there.  Worse directed event traffic of all time.  And no, I’m not being dramatic.

Luckily we had a friend in front of us that gave us a hint of a back way in.  We took it! We arrived right before race time, but they ended up delaying the start because of the awful traffic anyways.

This was great because it gave me time to use the bathroom (important) and take pictures! 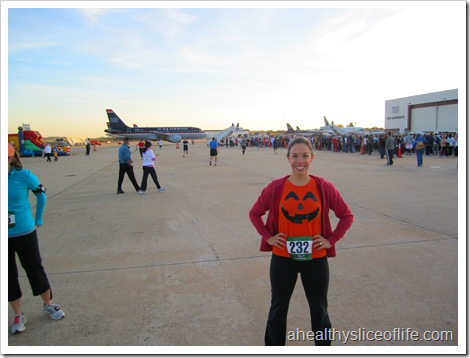 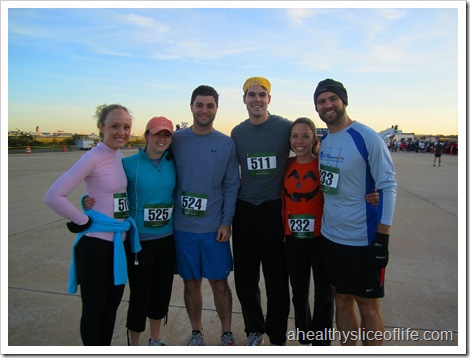 are you diggin’ my pumpkin shirt, or what?! 😉

My nerves started kicking in around the time we were lining up.  Especially because we had jogged about a 1/2 mile to get to the starting line because we had parked so far away.  I was worried that I needed that 1/2 mile back for my legs to use during the real race. Oh well, no turning back now! 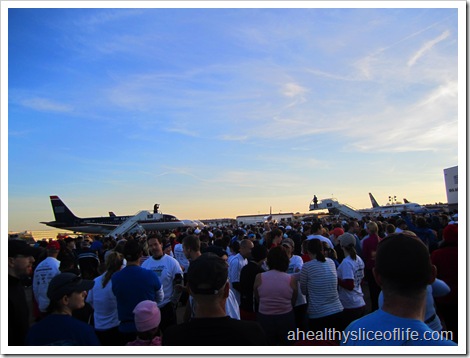 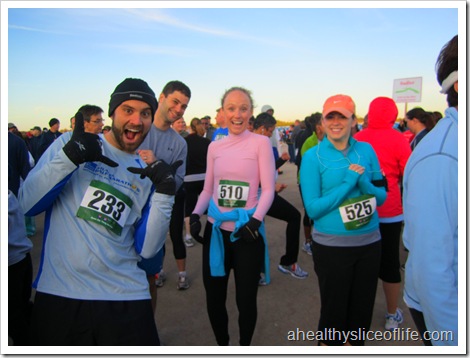 Soon enough, with the shot of a gun (a gun at the airport? I didn’t think that was appropriate…) but BANG! We were off.

Although I started with my friends (see above), as soon as the race started I had tunnel vision.  I didn’t know where anyone else was, and I didn’t care. I was focused.

The Runway 5k provided a lot of fun sites to keep me entertained, including planes that landed on the runway right beside us… how cool! 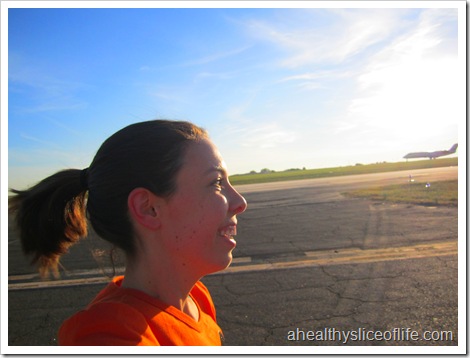 obviously not my best side, but I wanted a pic of the plane and me 🙂 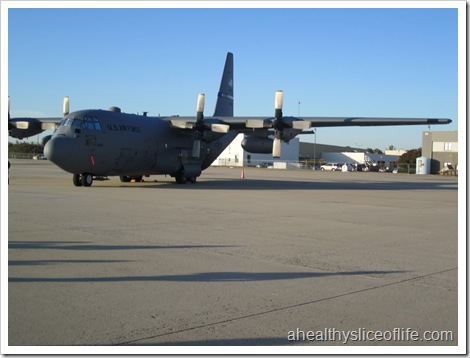 I started off feeling great. Weaving in and out of people a ton of Girls on the Run groups.  And I finally, FINALLY, understand the importance of pacing.  I didn’t wear a watch.  The didn’t display times (or mile markers very well for that matter).  I had no clue how far I had run or how I was pacing.  Was a running faster than usual because of nerves and excitement? Or slower than usual because I was scared of burning out? I hadn’t a clue.

So I just ran.

I skipped the water stations because the thought of drinking water made me sick. Odd? 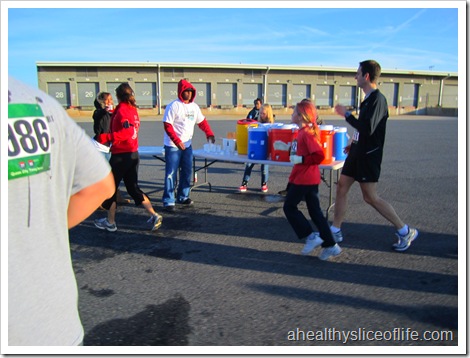 The race actually passed by fairly quickly and soon enough I saw the finish line around the corner ahead… maybe .75 miles away?  Seeing the finish line had me excited and I sped up my pace.

Hubbs finished ahead and me and was waiting for me about a quarter mile before the finish line to grab my camera. He cheered me on, the ran ahead to catch my triumphant finish! 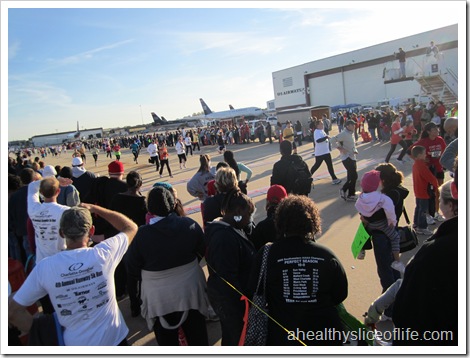 See the orange shirt that looks like it’s speedwalking it’s way across the finish line? THAT’S ME!! 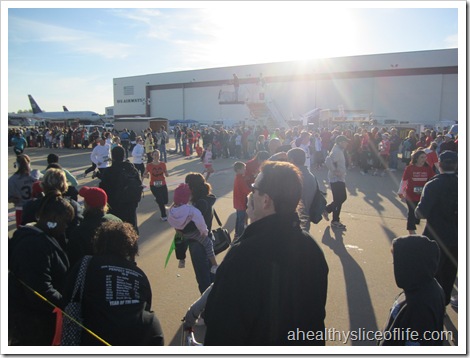 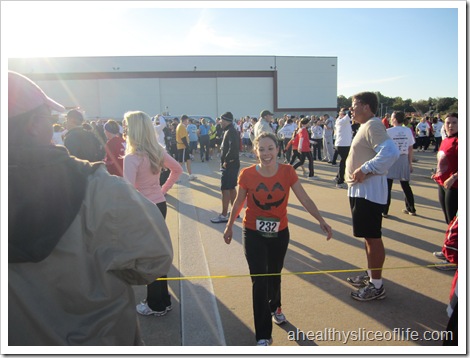 I did it!! Now I’m running over to get my well-earned hug!

I was ecstatic!  I felt like I ran faster than I had before and my legs ached with pride. 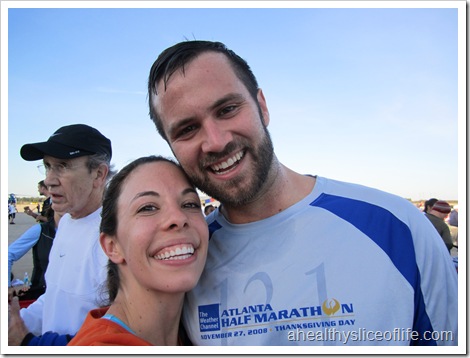 I walked around to keep the legs loose, grabbed an apple 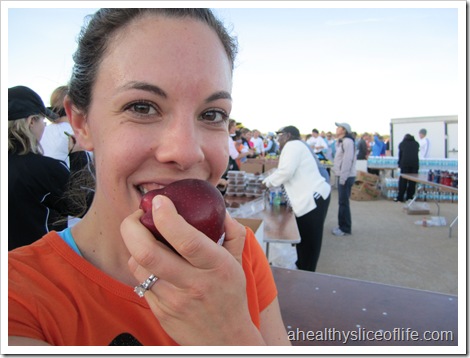 and found the rest of our group! 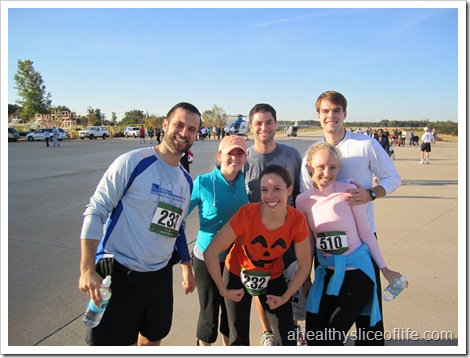 Joe, top right, finished in 17 minutes and some seconds… WOW! He placed 4th in his age group.

I decided that crossing the finish line my victory, but I was still curious to see how I did.

Let me tell you what… 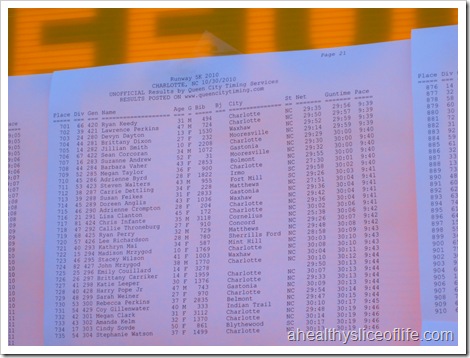 There were roughly 2200 runners, so coming in 704 was awesome! Especially because…

I FINISHED IN UNDER 30 MINUTES!!

What an incredible first race! 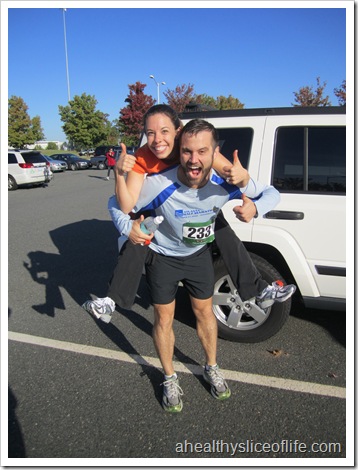 After a very important refueling, shower and nap, we hit up the local fall festival… 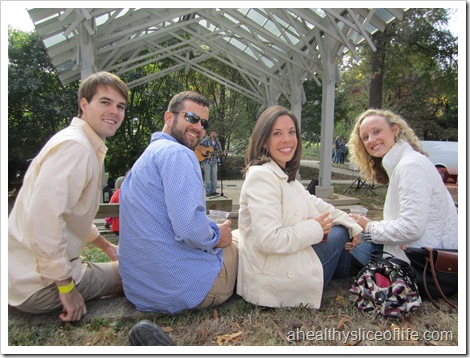 and then dressed up and headed out for a Halloween pubcrawl!  I loved our costumes.  Here’s a hint… it was a couple’s costume. 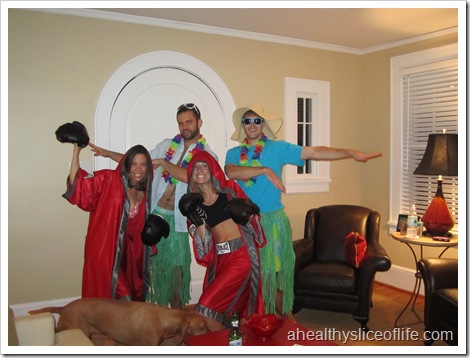 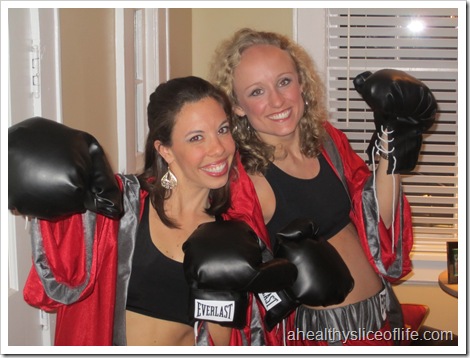 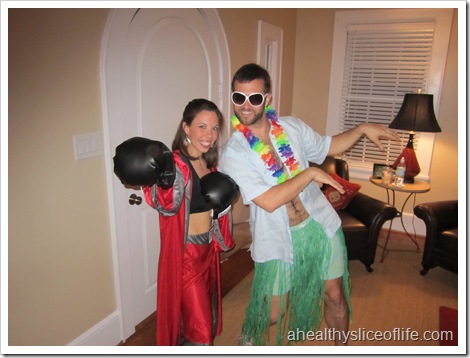 Can you guess what we were??

Answer will be revealed tomorrow!

Thank you SO much for all your support! Now I need to decide what my next athletic goal will be… hmm….