Hmm… doesn’t titling something 101 imply I’m an expert and sharing my wealth of knowledge with you? Well, I’ve been eating my Nannie’s homemade pickles for years, so let’s go ahead and allow me to assume expert status, despite it being my first time actually making them myself.

Nannie’s pickles are famous and deeply loved in my family, as is Nannie herself. 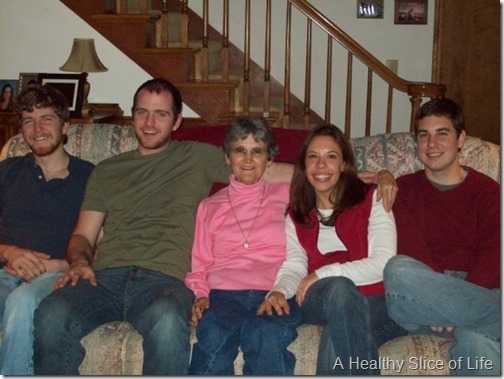 When I expressed interest in learning how to make them, Nannie handed the reins to me, along with the recipe, canning salt and lime. There was no turning back now. 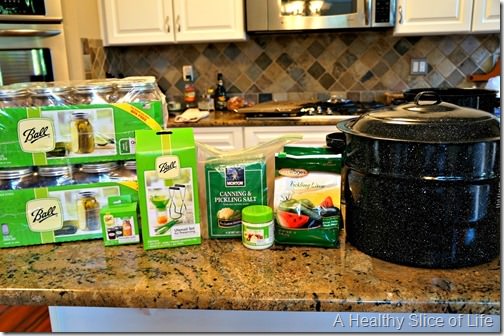 Then I decided to go big or go home and buy 24 lbs of pickling cucumbers from Josh’s Farmers market. They gave me a great deal and the cucumbers only cost me $20. 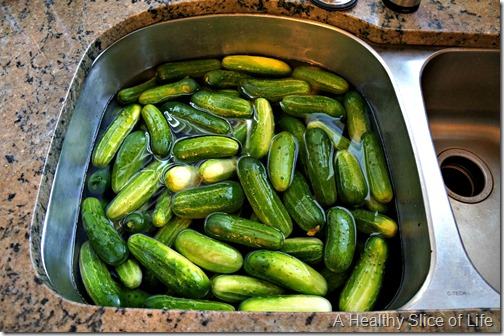 I thoroughly washed the cucs multiple times before slicing them up. 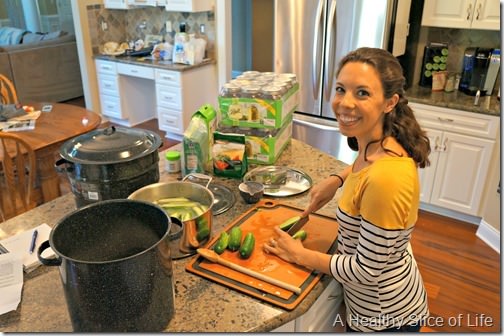 To keep them crisp (the sign of a good pickle), I soaked them overnight in lime water (which is different than a lime you’d use for a margarita… told you, expert status over here 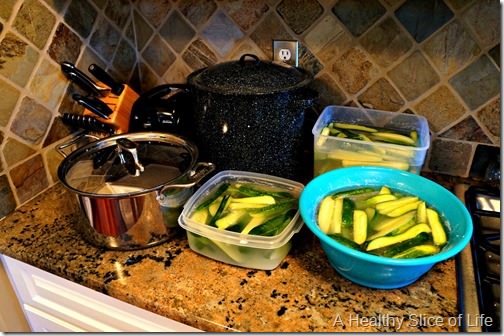 Nannie recommended a large cooler, but we didn’t have a clean one, so I made due with what I had.

Knowing I needed a lot of dill, I also harvested some from the back yard. I washed it, rinsed it and dehydrated it myself. Then I told David we could totally make it on a farm by ourselves. I mean, I just DEHYDRATED DILL. Clearly I was capable of anything. 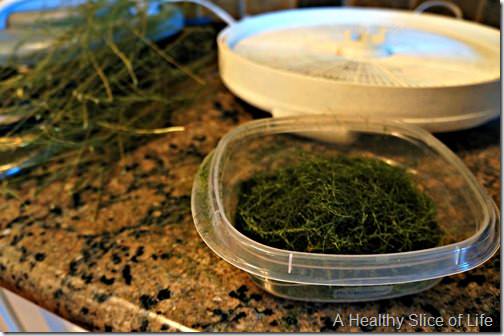 The next morning, I rinsed the lime-soaked cucumbers three times. 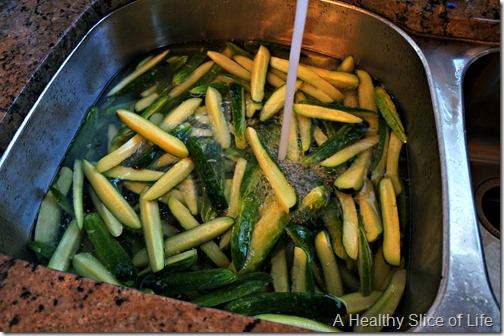 Then covered them with ice water for 3 hours. 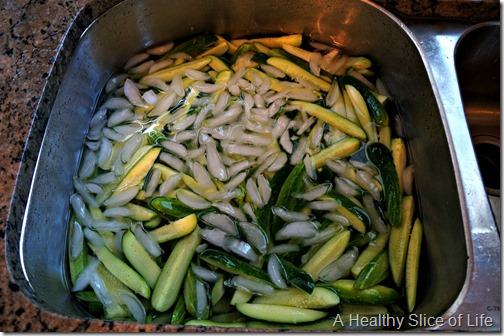 Finally, it was TIME! 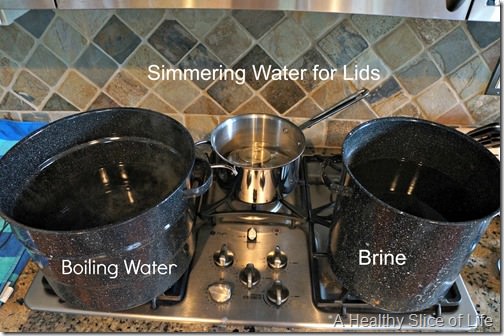 The brine is made of up of a ratio of 2 cups water, 1 cup vinegar and 1 Tbsp pickling salt. I must have multiplied it by 15 or so. We went through a LOT of brine.

I also set up the assembly station for packing the jars and prepared to get started. 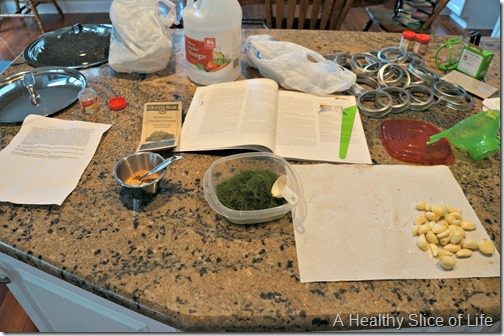 Though I’ve heard pickles are forgiving, I wanted to follow the directions as closely as possible in hopes they would turn out half as good as my Nannie’s. I ran all the jars through the dishwasher so they’d be sterile and slightly warm. Then, it was time. 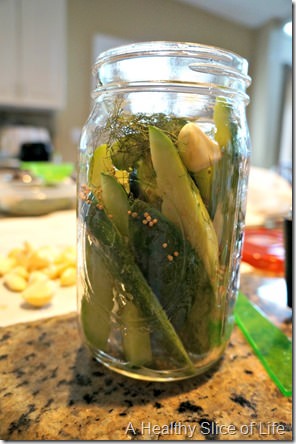 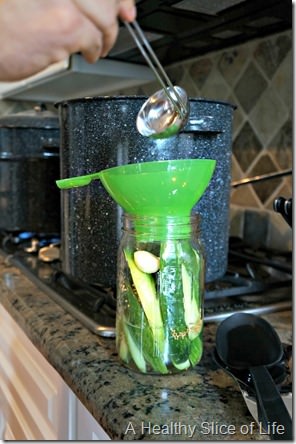 We carefully ladled in the brine, being careful not to get the jar rim wet or dirty. 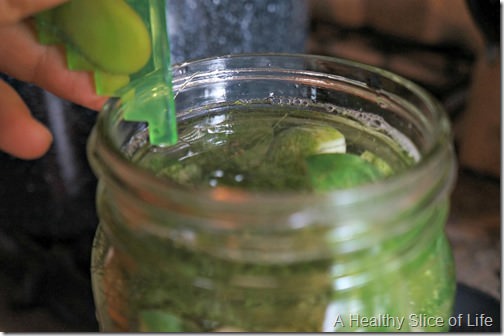 I removed any air bubbles then measured to make sure we had 1/2 inch of head space before capping the jars and filling the rack. 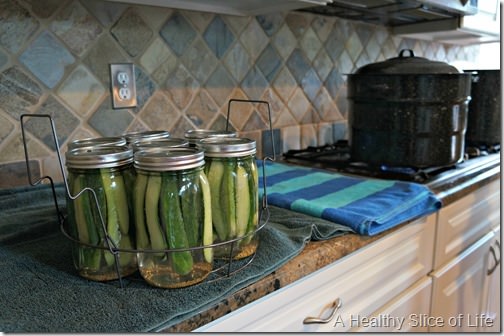 Once we had a full rack (7 jars), David helped me lower them into the boiling water. 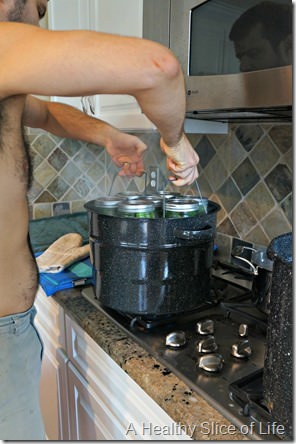 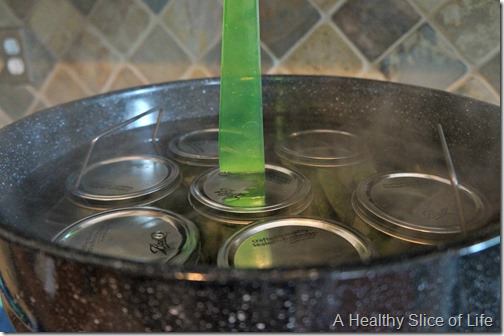 then put the top on and let it boil for 20 minutes. During that time we filled the next batch of jars. When the timer went off, we pulled the jars out one by one and placed them on an old towel to cool. 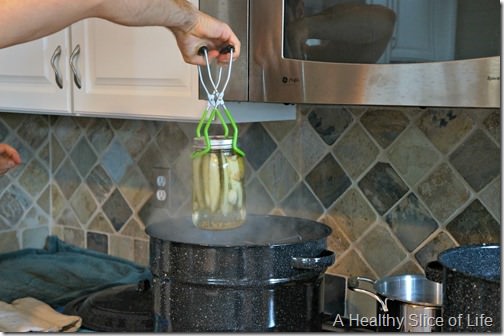 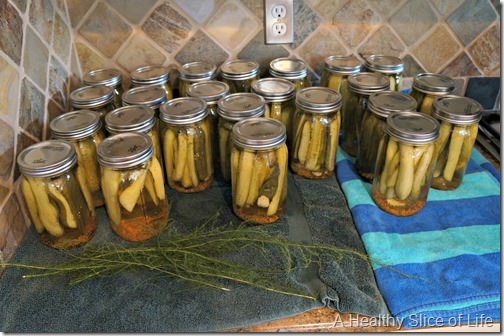 They need to sit for at least 6 weeks before consuming,  but Nannie recommended 3-4 months. So right now they are on display in our guest bedroom. They look the part, and soon I’ll pop open a jar to taste how they turned out.

I am really proud of myself for giving canning a try (it was a goal of mine for the year!), and now I think I have the bug. I want to try pepper jellies or jams and maybe work my way up to tomatoes or chili. I just think it’s a smart way to store food and… it’s really pretty too!

Do you want to or have you ever canned foods?
What have you done? What’s your favorite?