Thursday are Charlotte days, so I’m trying to squeeze in the blogging before I head in to ‘the city’. It really isn’t that far… 30-40 minutes? But since I go early enough, I get to listen to my favorite radio… Wake Up with Taylor of Cosmo Radio on Sirius XM… which makes the time fly by! Has anyone ever listened to the Wake Up Crew? Sure, some of it is mindless, but it makes me laugh, so judge me if you must!

This morning I was craving some of that creamy pb from the other day, so I toasted 2 little (they were the end pieces) of Ekekiel , smeared on about a tbsp of PB&Co Cinnamon Raisin, and topped it off with a rather mushy banana 🙂 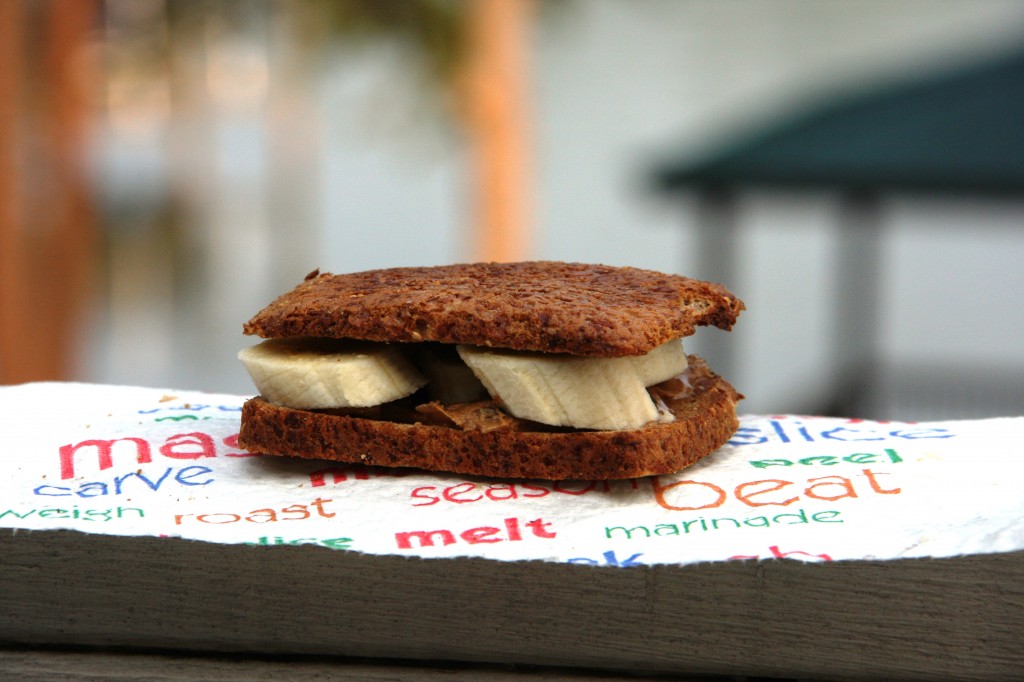 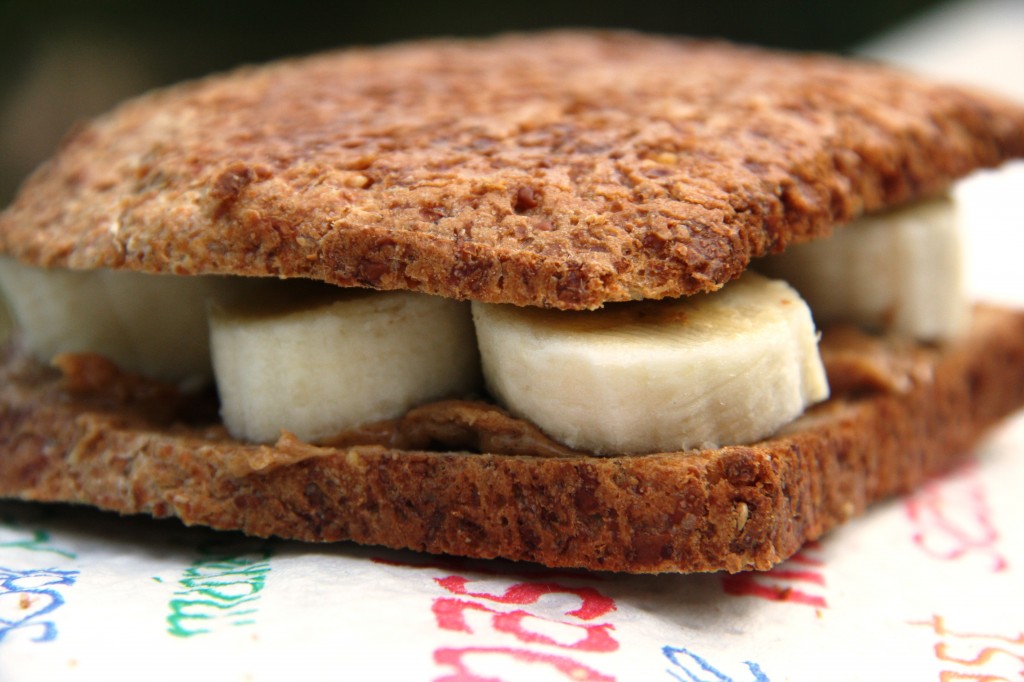 I’m not going to lie… it tasted better the other day on an Arnold Sandwich Thin. 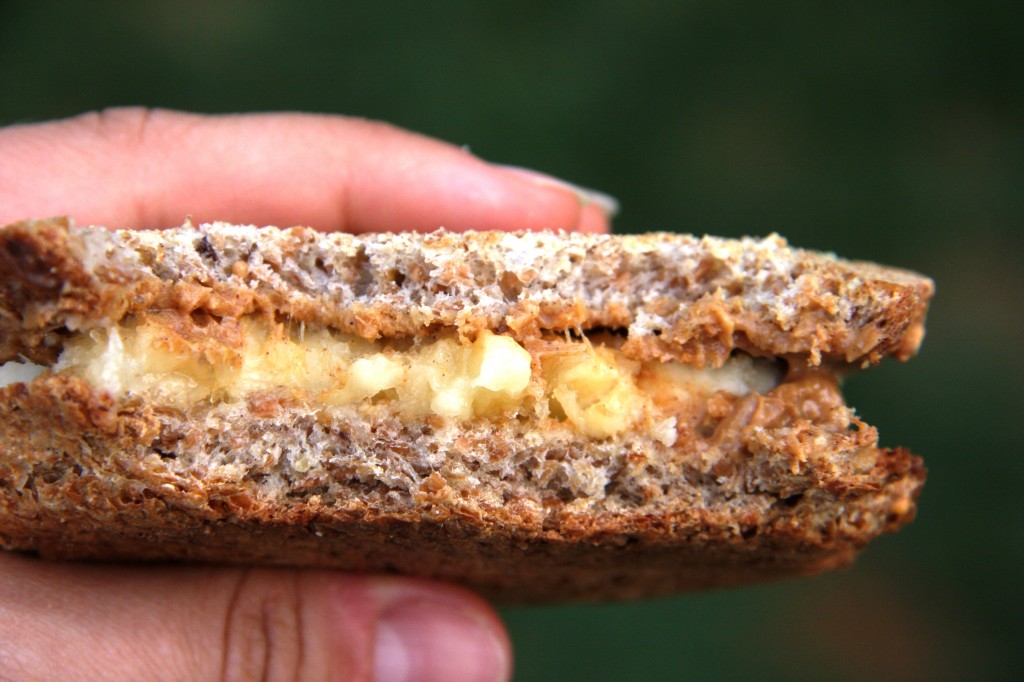 During my trip to the city (I really sound like I live out in the sticks, don’t I?), I also hope to squeeze in a little shopping for bachelorette items. My friend’s bach party is next weekend in Charleston, and I’m getting very excited about it! I’m in charge of Friday night… AKA the lingerie shower.

Do you have any suggesstions on games, decor, snacks, dare ideas for Saturday night, restaurants/bars to visit, etc?

Please share some fun ideas… I want to make the weekend unforgettable!

Thanks for the Bach party ideas… I think it’s going to be so much fun!!

Today I was able to meet hubs for lunch at a Chinese fusion place (Fusion Bowl)… One of my favorites when I’m looking to OD on sodium 😉 I started off with some happenin’ hot n sour soup: 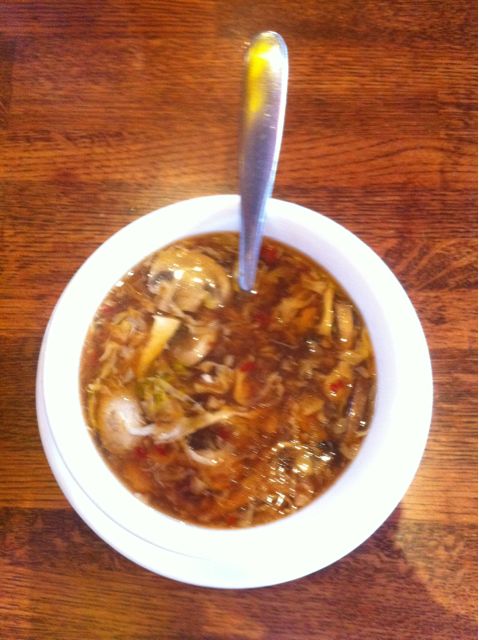 Then ordered my “usual”… Shrimp and broc with brown rice! 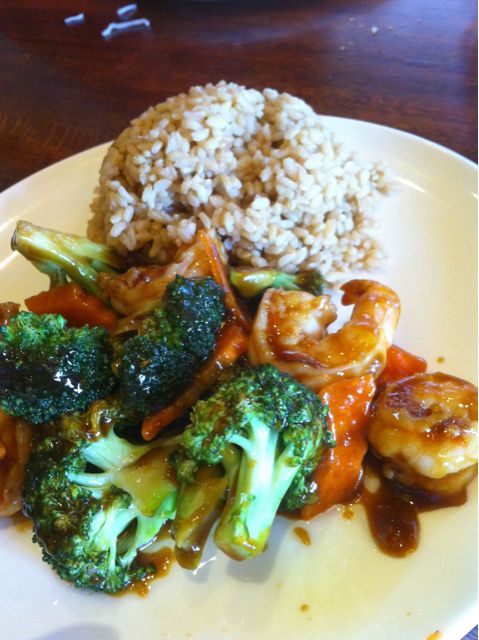 It’s sooooo good and I like this place because their broccoli pieces are real big florets, not mushed up like I feel most Chinese food is. The only problem with it being so tasty is that I eat a LOT of it! 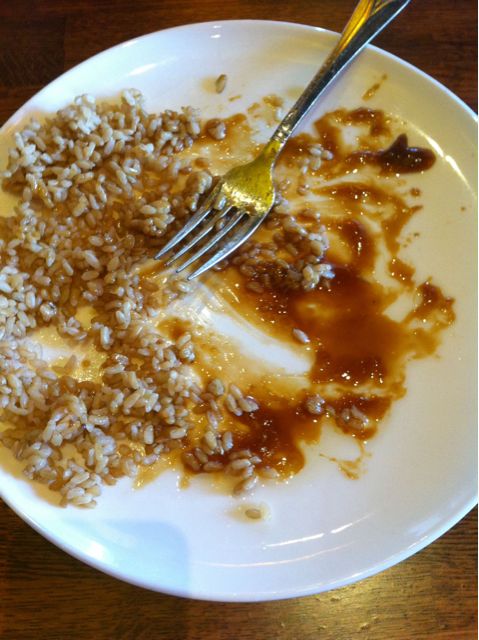 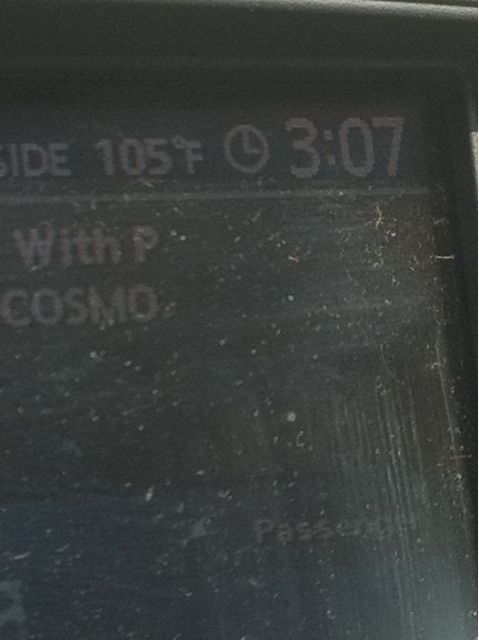 This kind of heat totally drags me down. It makes me sleepy and lethargic. And it makes exercising sound miserable. I may have been lucky enough to skip exercising today, but hubs signed us up for a tennis court, I believe. I don’t mind tennis for exercise! Even when it is hotter than hades out.

I had a quick snack when I got home… Dipped in newmans own, which was pointless because the dressing wouldn’t “stick”. Good veggies though 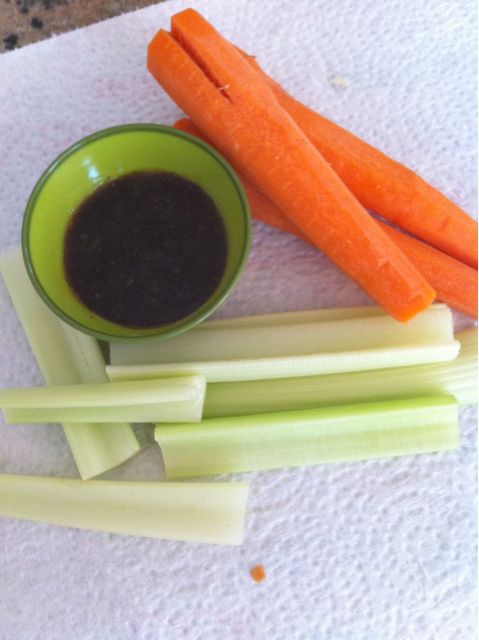 So… it turns out we couldn’t get a court.  Guess that’s the universe’s way of saying I shouldn’t work out today, right?? For serious, though… how do you get motivated to exercise when it’s over 100 degrees out?!

Instead of tennis, I ate a Chobani pom (not pictured… oops!) and joined Hubbs and the bug out on the boat.  Koda is scared of the boat and we are trying to get her over it.  So I coaxed her aboard with food, and when the engine started, she was not happy with me.  But I think she started to warm up to it, and before long, her little sniffer was up in the air, and her ear and lips were a’flappin.

We got close to an island and Hubbs and I jumped off to swim around (that counts as exercise, right??).  Well, Koda hasn’t ever jumped off anything before either, so she cried and whined and whimpered her little heart out.  Hubbs wouldn’t let me swim back to her, and with good reason… after about 10 minutes, she JuMpEd!! And not a “oops, I fell in the water” jump, but a full, dock-flying dog jump! I’ve never been more proud!  We all swam to the island and played around a little before heading home… I hope she learns to love the boat!

Anyways, back home I was starving, so I whipped up dinner… Mexican again! Since Hubbs didn’t get home until 10:00 last night, he didn’t get fajitas, so I made them again… with steak 🙂  But I ate so many of these: 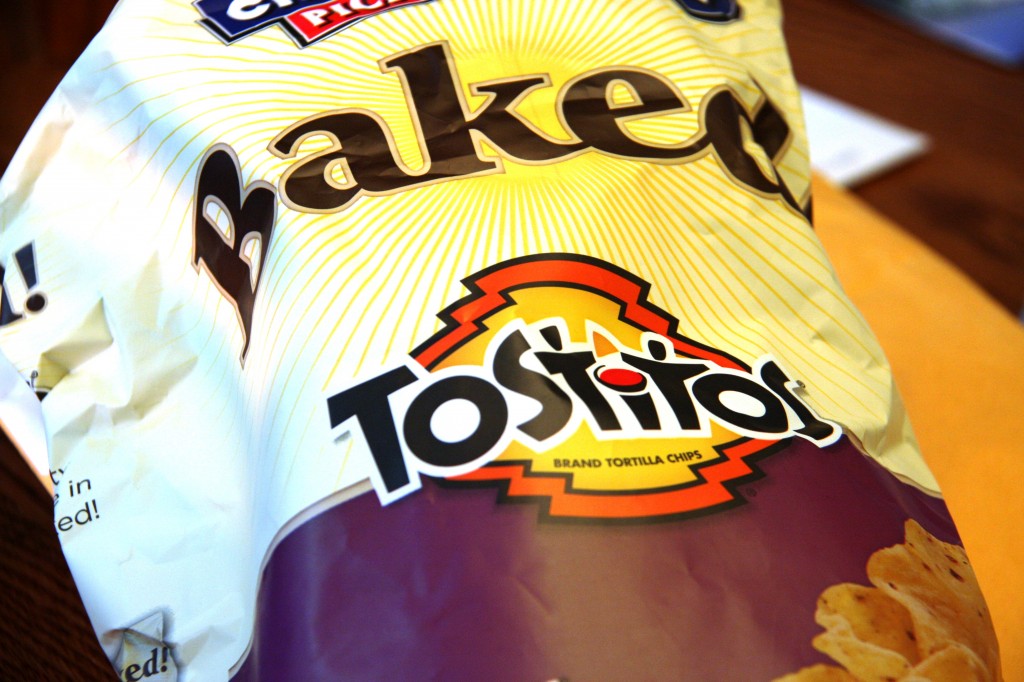 that I decided to forgo the tortilla and stick to another salad.  Good decision… I’m happily stuffed 🙂 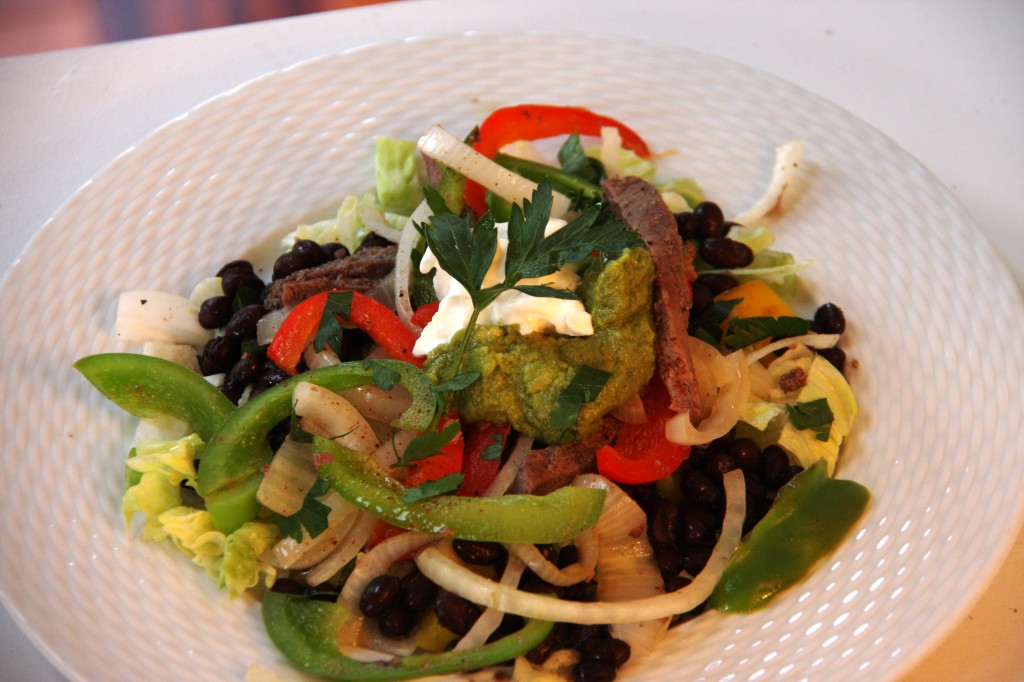 Look familiar Iceberg, peppers, onions, a few slices of steak, black beans, a dollop of (light) Daisy, some guac… and then I topped it off with salsa (unpictured) and fresh cilantro! Yum!  Even though I probably had only 15 chips total, the bag ended up looking like this, thanks to Hubbs: 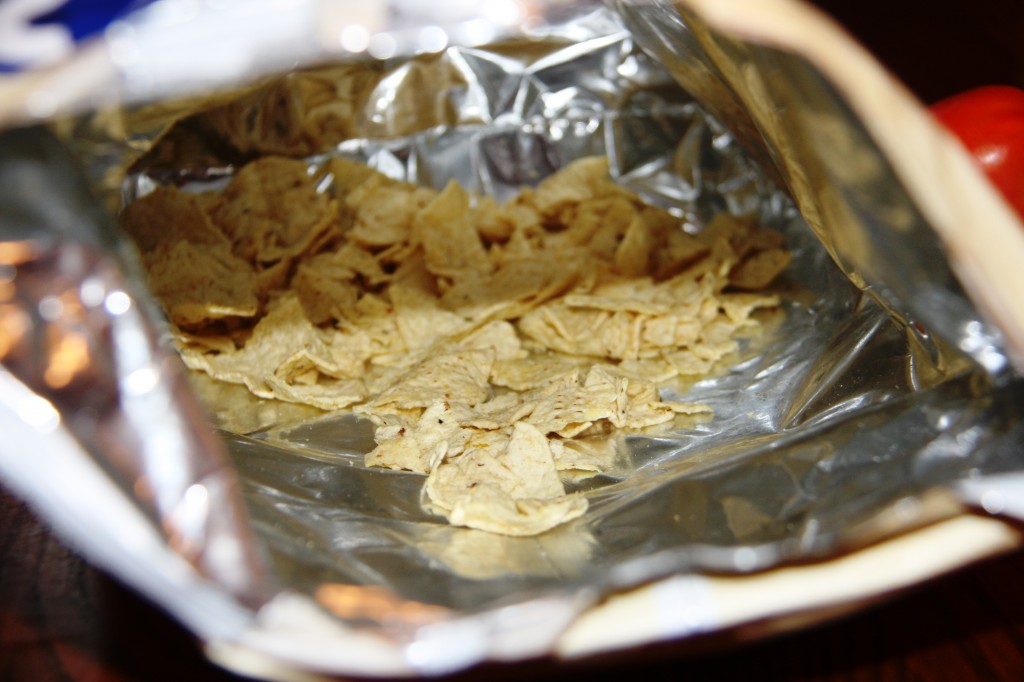 Koda hung out with us during dinner, and was pretty tired thanks to her 4 mile run with Hubbs, chasing sticks in the water with me, swimming and being stressed on a boat.  But I couldn’t stop laughing because she was laying in the most awkward position ever!  Evidently she was comfortable, though, because she stayed in this same position through all of dinner: 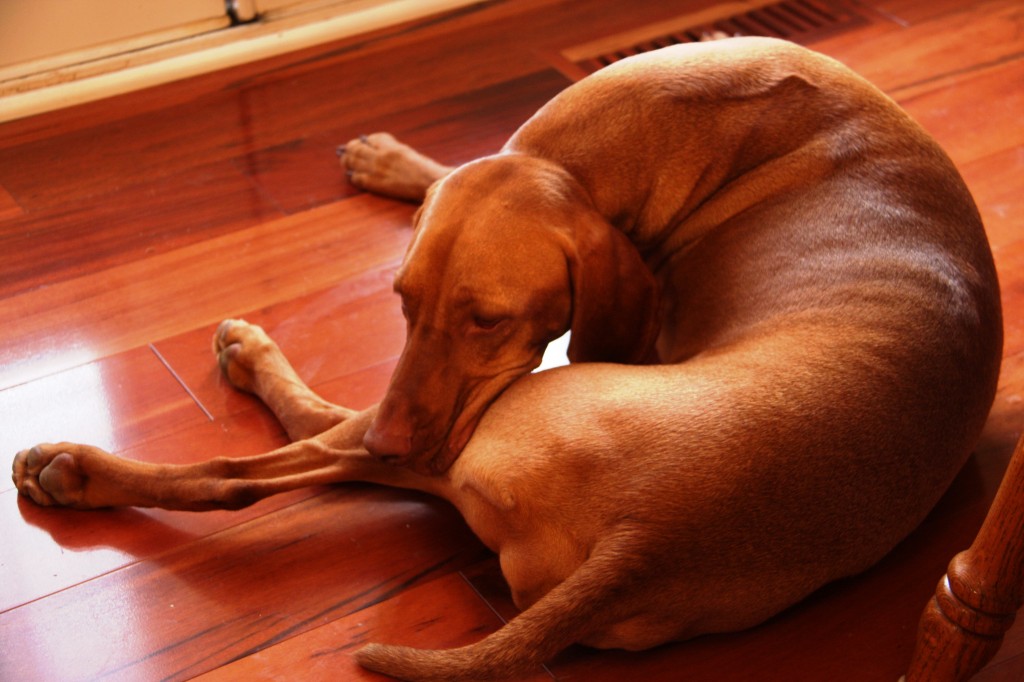 Oh I just love her.

Anyways, that’s all for tonight! Sweet dreams all O:)