Second kids are so different from firstborns in countless ways. I’m convinced this is at least in small part due to how we parent them differently. With Hailey I was so on top of everything. When do you start solids? How do you potty train? What age do you switch them into a big kid bed? I was constantly searching for the right answer. By the time baby #2 arrived, I’d realized the universal truth that should be at the beginning of every parenting book: there is no single right answer.

Though one might think this would sound intimidating (then what do I do?!), I found it incredibly freeing. Just go with the flow. Kids will eventually eat food. They will one day be out of diapers. Etc. Sure, I’m all about facilitating and encouraging, but I’m not down with any forcing.

Because of this laid back mindset, Kaitlyn’s transitions have been fairly relaxed. Shoot, she didn’t wean until 27 months old. Potty training is coming along quite nicely too, with not much credit to me. She is just interested and doing it. Yes, we clap and jump around like fools when she succeeds, but she’s leading the way. I’ve liked the idea of letting her take the lead so recently when she began to battle being in her crib in a sincere way, I took note. 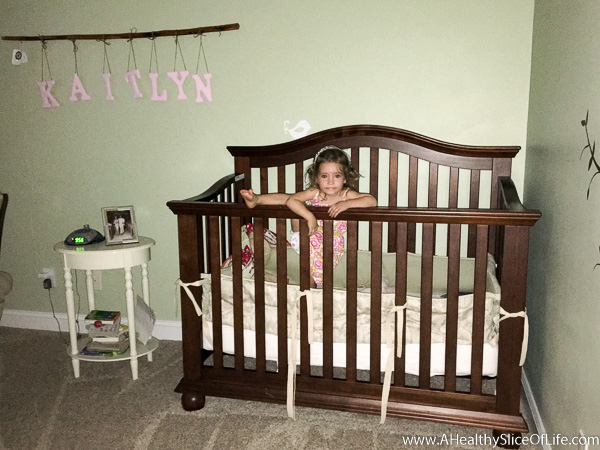 She started screaming her head off when we put her in for naps and night. She’d shout OUT OUT OUT!! The only reason she didn’t climb out herself (she’s totally capable) is that I would raise my eyebrows, wince, and say “oh wow, that’s sure going to give you a big boo boo!” Bad parenting? I don’t think so.

Still her persistent resistance led David to try a little freedom at nap time while I was away on my girls weekend. 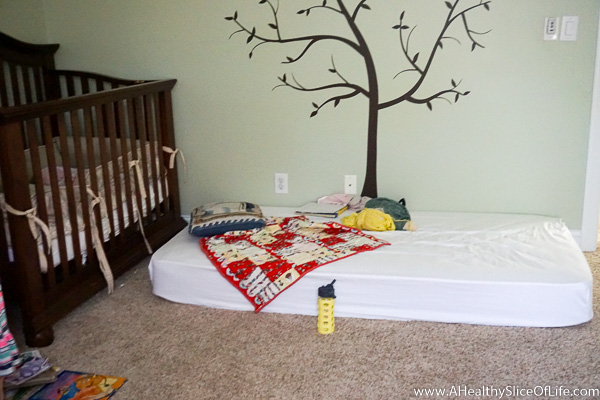 A mattress on the floor and letting her stay out of her crib. She was really proud of her newfound freedom. She would stay fairly quiet, playing by herself, for about 45 minutes – 1 hour. Pretty good, but she wouldn’t actually fall asleep. Still, she loved being out and would scream at night when she went back in her crib.

So, finally, I told David we could do it- start the transition. 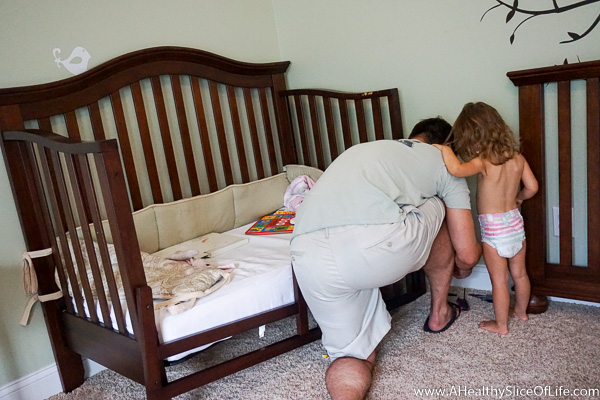 Hailey was talking it up and it appeared that all systems were go. Hailey gave Kaitlyn one of her “big girl pillows” to solidify the transition and insisted on tucking her in. Nothing but giggles and smiles. 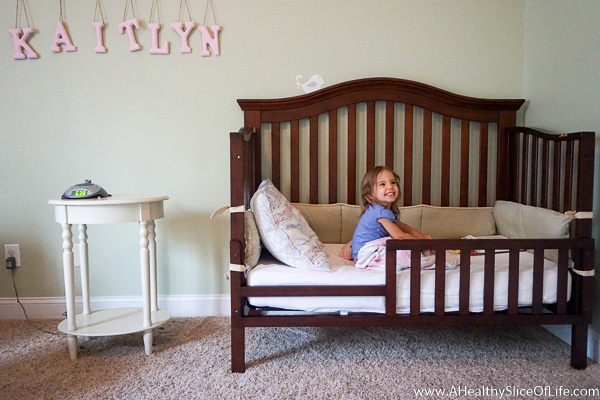 She wanted to close the door herself so there was one last “I uv ew!” as she closed the door behind me. Immediately I pulled up the camera monitor and watched her climb into bed. My heart felt that all-too-familiar since of pride, overwhelming love, and a hint of sadness that my baby was getting bigger.

Then, I heard sniffles. Followed by a few whines.

Nothing major, so I decided to leave it alone.

However 10 minutes later there was no mistaking it- full on tears, shrieks, and Mamaaaaaaaaas!

With that, David was back up in her room within 30 seconds turning the bed back into a crib while she rocked on my lap repeatedly telling me “I wike cwib. I no wike bi gur beh.”

And that’s how the transition to the big girl bed didn’t go. I won’t lie, this mama’s heart thinks it’s just fine. 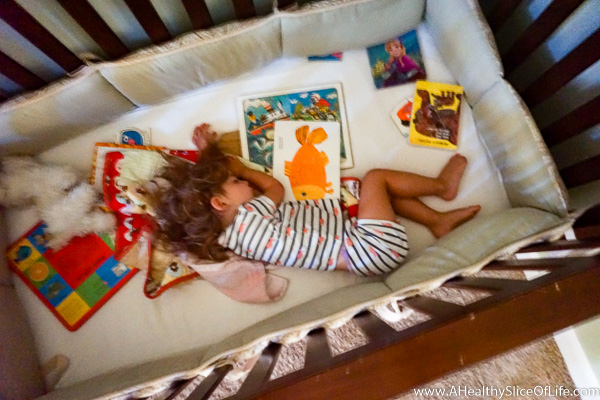 Let them be little.

I’m in no rush my sweet girl.