Can you believe it’s been 7 weeks since Hailey came into the world? I certainly can’t! It’s also been 1 whole week since I was officially cleared for exercise.  Since the doctor gave me the official thumbs up, I’ve hopped back into fitness, and it feels so good!

I’ve missed wogging more than any other exercise (though I’m itching to get back to yoga, but that may be a while since I’m not comfortable putting Hailey in childcare yet).  But one thing I can do with Hailey (& Koda) in tow?

I’ve been staring at the C210K app on my iPhone ever since I announced it as my new year’s goal …and then found out I was pregnant the very next day! So, here I am 11 months later and finally ready to tackle this challenge. 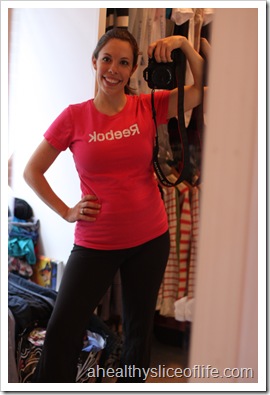 (This outfit is why I’m considering new workout gear.  Thick pants and a t-shirt are my running gear. Oh, and clearly you can tell from the background I have an affinity for horizontal stripes… dangerous for post pregnancy!)

Couch to 10k is set up similar to the Couch to 5k app I enjoyed so much last year.  It’s a 3 day a week program, and I’m trying to fit it in on MWF (reminds me off college class schedules :)).  This week, I’ve accomplished it! Though it is a bit more difficult while pushing a stroller and holding Koda’s leash,  BUT…

Running with my posse in tow worked OK this week when the task was simply run for 30 seconds and walk for 4 minutes and 30 seconds.  When things pick up, I might have to leave Hailey at home (with proper supervision, of course!).

So how does it feel during those 30 second spurts of running? Mentally – fantastic! Physically? Kind of like my insides are going to fall out.  I’m very glad it starts slow, and I hope it stays that way for a while.  But I’m not letting that discourage me, because like Pinterest taught me:

I repeat this mantra to myself quite often.

And… that’s not all! Look who has returned to my life. 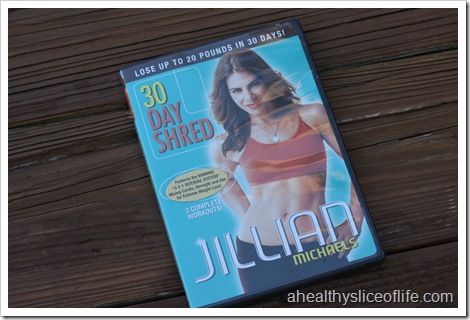 I know strength is important, too, so I’m fitting level 1 in on Tuesdays and Thursdays. Yes, this is adding onto my already busy schedule, but…

it’s all about making time.

Overall I am grateful that I’m healthy enough to be able to get out and move.  I’m feeling inspired, challenged and ready to be a new, improved, lean, mean mommy machine!

And thank you facebook & twitter friends.  With  help from your feedback, I’ve officially decided to take the new me to another level.  Scissors meet hair at 10:30am today! AHhh! 😉

What is your favorite health/fitness quote that motivates you?